It’s icky, drippy and grindingly gross — and will make your forehead itch — but Abel Ferrara’s Bowery-set dime store horror opus has withstood the test of time. It’s a decent enough psychodrama, if one can set aside all the psychological-philosophical booshwah that’s leaked into horror criticism. Oops, Savant’s guilty of that too. 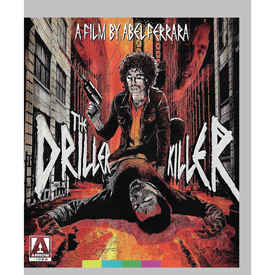 As some may have noticed, I’ve mellowed on the output of low-budget and independent horror efforts from the 1970s. While I was in film school bending my own tastes toward high production values and artistic merit, some crazy young filmmakers, mostly on the East coast, simply went for it, making whatever they could, with whatever meager resources they could pull together. And they made movies that won releases in the cockeyed, exploitation-tilted film market of the time. Some of them became one-shots but others were able to build on their efforts, and put together what might be recognized as a filmmaking career. 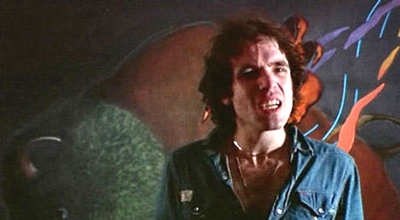 And this they did by not worrying about what Mom and Dad would say, and not even what their instructors would say — most film school teachers had never faced the practical problem of making a movie out of next to nothing. So before I get into this particular grungy New York effort, let’s name some of the people who did well, even if their first films were a mess of 16mm grain, with every third shot out of focus: Alan Ormsby, Bob Clark, Richard Blackburn, Sam Raimi, Tobe Hooper, Wes Craven.

About the time that Don Coscarelli was finishing Phantasm in California, New York artist and former musician Abel Ferrara started showing his finished The Driller Killer around. As I was then in a state of production-value snobbery, I didn’t have much patience for it. On Saturday nights in 1980 or so, I’d drift down toward La Brea Ave. and the New Beverly, where Jim Ursini was working as a projectionist. Theater owner Sherman Torgan liked discussing movies with me, and he asked me to see Driller Killer because he was upset that he’d paid good money to show it at midnight weekends, and the crowds weren’t turning out. I didn’t have much of an opinion. The 35mm blow-up print looked terrible and the sound was indistinct. It played like somebody was trying to mix Taxi Driver and Repulsion, with a quickie mass-murder gimmick represented by a different power tool from the toolbox. Nudity, grunge-punk music, profanity, and one impressive gore effect did the trick. 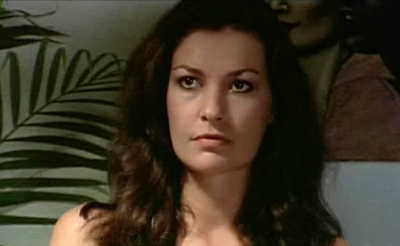 After seeing The Driller Killer I dismissed Abel Ferrara until I later saw Ms .45 on the famous “Z” Cable channel. It wasn’t bad — it traded grunge horror for feminist horror in the Death Wish subgenre. Later on Ferrara reached full respectability with The Bad Lieutenant.

Ferrara is a decent enough storyteller and The Driller Killer is better assembled than a groaner like Children Shouldn’t Play With Dead Things. It has the lower Manhattan art grunge world on its side, at a time when much of New York was a forbidding, crime-ridded hellhole. Over at the intriguing Tumblr blog This Isn’t Happiness, the webmaster has a recurring visual theme going called ‘Sucking in the 70s’. The Driller Killer epitomizes the zeitgeist of trash-strewn streets and overpriced slum living spaces where young artists, musicians and their drug soaked hangers-on eke out a non-living from neurotic hipness.

Ferrara’s story is clear enough. Manhattan artist Reno Miller (Jimmy Laine, actually Abel Ferrara) creates interesting canvasses but has ‘artistic’ moods. In other words, he’s an abusive near- psycho, confounding his live-in girlfriend Carol (Carolyn Marz) and her sleep-in girlfriend Pamela (Baybi Day). They’re broke, and Reno is making no progress with a large painting of a buffalo that he’s sure will be good news for his career. Carol loans him money, some of which she gets from her estranged husband, Steve (Richard Howorth). A rock band moves in next door and Reno can’t take the noise; between it and the pressure from his gallery contact Dalton Briggs (Harry Schultz), Reno is starting to go over the edge. Then he sees a TV ad for a portable battery pack. Facing artistic failure, he takes up an extracurricular creative activity: roaming the late night streets and subways with a power drill, drilling helpless homeless men to death. Why didn’t I think of that? 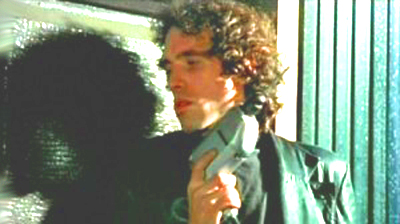 In Arrow’s new transfer we can see that, although The Driller Killer is shot on16mm, it’s reasonably well filmed, and edited even better. Ferrara’s camerawork is coherent, with some halfway dynamic shots. The art film pretentions make it more than a shapeless collection of commercial elements. Hero Reno is an artistic Travis Bickle who relates to nobody, not even his beautiful girlfriend, nicely played by model Marz. Being a non-communicative oaf eliminates the need for dialogue and relationship scenes. Most of the human interaction in the picture is limited to shouted complaints. Reno spends five minutes unloading his wrath on Carol, and she seems content to take it. Pamela is a brain-addled fan of the rock group The Roosters, and in a nice scene she puts up with the abuse of one of its groupies. Nobody communicates their fundamental angst, in other words. Through the aid of some so-so ‘deranged’ montages, Reno goes nuts and becomes a serial killer, thus making the film a marketable horror item. There are also nude lesbian shower scenes and lots of cutting away to the band next door. The Roosters endlessly practice their songs, especially one with a bass line identical to the Peter Gunn Theme.

On the other hand, most everything we see is competently shot, and when a scene goes out of focus, there’s no harm done. Some of the best material sees Reno relating to a group of Bowery winos. They look too convincing to be fakes — we get the feeling that Ferrara hung out with those people, adding to the film’s street cred. One addled derelict (Peter Yellen) that harasses two bus passengers does a great ‘I’m freaking out’ act, pretending an old man is his father, etc.

Reno then begins murdering these same derelicts, as his psychotic contribution to ‘street art.’ He sees an ad for a piece of equipment called a Porto-Pack; it is actually an extra battery belt used to power a 16mm docu camera. Reno runs around like a mad Energizer Bunny, attacking the surfeit of bums, homeless men and mental cases on the nighttime streets, drilling them to death two and three at a time. There are no consequences to this, even though Reno walks through the night streets with his incriminating drill rig in plain sight. Manhattan is a hell where anything goes, but there’s really nothing made of that cliché observation. 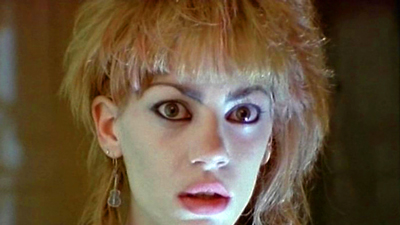 To insure at least some discussion, The Driller Killer ends ambiguously. (spoiler) We’ve seen flash-forwards to a blood-soaked Reno reeling in agony, so are we to believe that he will soon actually kill himself? Carol crawls into bed with him (“Gee, the bed is so warm”) thinking she’s with her husband. On an earlier, less distinct disc, I was unclear about this inconclusive scene.

Arrow Video USA’s Blu-ray + DVD of The Driller Killer is a new restoration from original film elements. The new scan and encoding looks very clean — the film isn’t nearly as grainy as it once was, and now we can see much better what’s going on in the occasionally murky scenes. In my first review of the movie, I couldn’t tell whose body was on the floor in the final scene, in the shadow of a sofa. The colors haven’t been hyped and the image still looks appropriately rough, but there’s a good chance that it looks better than it ever has.

There are two cuts on board, the theatrical and a director’s extended cut that’s five minutes longer. Even the theatrical version appears to be a bit longer than the earlier DVD.

Driller Killer still begins with the ‘play this movie loud’ title card that went in front of (I think) Scorsese’s The Last Waltz. Arrow gives the film English subs, which helps with some of the less distinct dialogue. 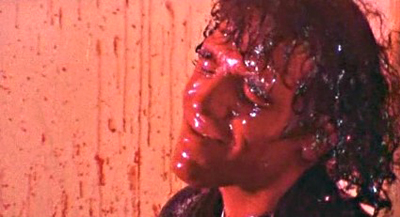 The movie gained extra notoriety in England when it went on the ‘Video Nasties’ lists. Arrow’s mostly new extras show a lot of attention and care; as the show was licensed directly from the filmmaker, none of the extras rely on second-guessing. Although he’s done them before, Ferrara comes back for a new audio commentary. We feel like we’re listening to a Bowery-addled artist much like Reno Miller himself. Ferrara remembers some details and people, but mostly just reacts to the images, as if each new shot was bringing back memories. Ferrara biographer Brad Stevens provides some good background and tries to prompt the filmmaker, but he’s on his own wavelength entirely.

The final film item is Mulberry St. (2010), ‘Ferrara’s own feature-length documentary portrait of the New York location that has played a key role in his life and work.’ The show really helps us understand the filmmaker, who still considers the neighborhood home and has an active relationship with many of its odd, and genuinely vulgar, inhabitants. A trailer is included as well. The first pressing only contains an insert booklet with essays by Brad Stevens and Michael Pattison.

I’m still keeping my old Cult Epic two-disc DVD set (2004), because it contains the entire Ferrara student film Could This be Love, that we only see a blip of in the docu hosted by Alexandra Heller-Nicholas.