Hey, let’s dig up a rotting corpse, just for fun! A group of crazy Florida theater students plays a group of crazy Florida theater students in Bob Clark’s spirited no-budget attempt to ride in the wake of Night of the Living Dead. An hour of bad jokes is capped by a satisfying zombie onslaught that got the film a major release and launched a career. That’s how a score of good directors got started in the 1970s. 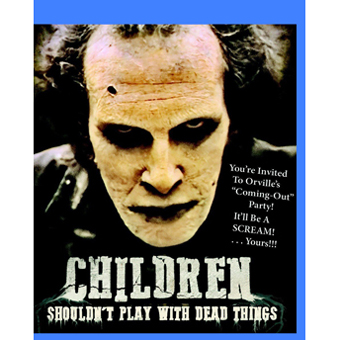 Hitting film school, UCLA and the big City of the Angels all at once in the Fall of 1970, I quickly became aware of some ambitious film students that were already trying to make feature films, by any means possible. I myself turned down a neighbor in West L.A. who wanted someone to help him film porn. I also nixed an offer to go to Greece to make a monster movie. A fellow film student said that his father would put up the money if the film showcased bottles of the family wine. Having no personal resources, I couldn’t see flying halfway around the world with a stranger and getting myself stuck with no money on some Aegean island. The would-be epics I knew about didn’t gel, but ambitious classmates like Jamaa Fanaka eventually turned their efforts into releasable movies.

That was the thing from about 1970 to 1975 — the market was so open that any watchable attraction with one or two marketable ‘hooks’ — violence, gore, nudity — might score a distributor. I saw a number of Los Angeles filmmakers get their start that way — John Carpenter, John Landis, etc. The big successes from the hinterlands included Tobe Hooper, Wes Craven and Sam Raimi.

Another independent idol was Richard Blackburn, from the Inland Empire east of Los Angeles, and his high-scoring one-shot chiller Lemora: A Child’s Tale of the Supernatural. Blackburn is not as well known, but his name is always spoken with respect.

Then come other winners of less repute. Back in 1972, stuck in Westwood alone over the summer, I found a poorly-printed horror film fanzine (the ? something Times) with a big article on a new movie from Florida called Children Shouldn’t Play with Dead Things. Some college-age kids with less experience than myself, just got together and made a horror movie rip-off of Night of the Living Dead. I had read Roger Ebert’s famed Reader’s Digest exposé-review in 1969 but didn’t catch the movie until my first semester at UCLA. Little did we know that it would launch five hundred wanna-be filmmakers. Down in Florida, the ambitious Bob Clark collaborated with a college theater group on a film that by today’s standards isn’t much more than a home movie. But because it had a house besieged by zombies, it was commercially viable. Amazing!

Children Shouldn’t  is said to have been made by Bob Clark in combination with his Deathdream, a Vietnam War spin on The Monkey’s Paw that is now regarded as a genuine horror classic. The two films share some key personnel but seem to have been separately produced. If anything, Children Shouldn’t looks like something shot with leftover cash from the better picture. At this level of filmmaking, the semi-amateur theater group is not a bad fit. Viewers willing to sit through an hour of painful jokes and irritating acting were rewarded with a not-bad zombie attack finale. Remember that in 1972 we hadn’t yet been inundated by the first wave of George Romero imitations.

Bob Clark’s script tailors the star role of Alan to his co-writer and theater enthusiast Alan Ormsby, who also masterminded the film’s varied monster masks and makeup. On a dark night, the eccentric (to say the least) Alan takes his little theater troupe out to an island house, where he plans to surprise them with ghoulish games. Entreated to cooperate or lose their positions in the group, the other actors do what they can to endure Alan’s power trip. Paul and Terry (Paul Cronin & Jane Daly) are the amorous acting couple. The un-amused Val (Valerie Mamches) returns Alan’s insults and questions his judgment. The oddly enthusiastic Anya (Anya Ormsby) is the only actor actually interested in Alan’s tasteless games. Chubby Jeff (Jeff Gillen) is the odd nerd out. Nobody seems overly concerned when the first item on Alan’s agenda is to dig up a corpse. He’s hired the bickering gay couple Emerson and Roy (Robert Philip & Roy Engleman) to act like ghouls while doing the digging. Dragging the body of ‘Orville’ to a nearby shack, Alan sets up a satanic ritual to summon the devil, raise the dead, etc. When nothing happens, Alan’s involuntary guests express their displeasure and decide to leave… just as the buried dead decide to rise from their graves and attack the living.

Children Shouldn’t Play with Dead Things will be at least a little amusing for anyone who’s ever had contact with a dysfunctional small theater group. In the absence of talent, the desire to achieve is buried under the weight of egos run amuck, often by some stage crazy self-appointed impresario who believes that projecting personal drama is the same as being destined for great fame. We hate Alan even before his awful wardrobe sickens us – he expects everyone else to support his personal fantasies of importance. Alan thinks of himself as Vincent Price in House on Haunted Hill.

So almost the first hour of Dead Things makes us put up with Alan’s ego eccentric, Theater Queen abuse. He’s a pretender and a sick exhibitionist, and he has no idea just how dangerous the words in his conjurer’s book can be. 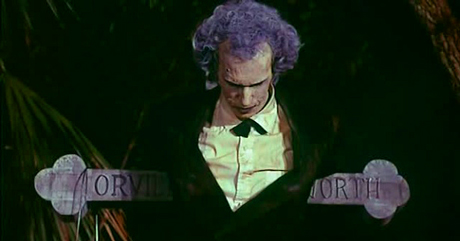 Bob Clark’s script plays better than it ought. The seemingly endless one-act black comedy consists almost entirely of Alan regaling his captive audience with sick humor and prissy grandstanding. There are many, many puns about being dead. The only item of interest is the desecration of the corpse of the evening, Orville; we’re curious to see just what Alan has in mind.

The amateurish trappings didn’t matter to the horror audience of 1972, which had a lot more patience than today’s fans. Jack McGowan’s 16mm cinematography is a little weak for this sort of show. The lighting is flat and artless in the dialogue scenes, but things pick up when the zombie attack finally begins, when we actually see some back- and rim lighting of actors. A selection of scary masks helps during the onslaught, which is more of a brief rout than an extended siege.

At first happy with his success, Alan is no better as a potential zombie victim than he was as a theater director. The film does have one really funny moment worth mentioning. Alan betrays his colleagues in such a cowardly way that even the zombies are given pause. It’s a good gag.

I didn’t appreciate the lesson of Children Shouldn’t Play with Dead Things until years later. My head was filled with notions of good taste and ‘great cinema art;’  if I did have the opportunity to make a horror picture it would almost certainly have been crippled by foolish notions of good taste. Scores of career directors and cameramen have ‘colorful’ credits early in their careers, and they probably didn’t ask their mothers for permission to work on exploitation pictures. Bob Clark used a pseudonym for his screen credit. He seems like a special case in that he went on to direct the beloved family film A Christmas Story, but he’s also the creator of Porky’s, a far sleazier film than Children Shouldn’t. Before his accidental death, Clark was planning to remake this horror picture that launched his career. The second time around, he surely planned to sign it with his real name. 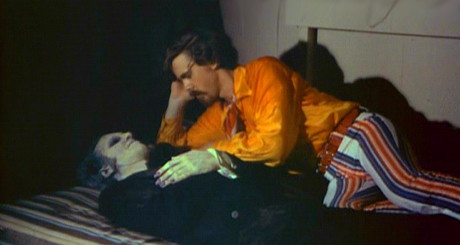 VCI’s Blu-ray of Children Shouldn’t Play with Dead Things is an attractive, uncut and extras-packed HD edition of a film that’s been issued on disc several times. Original theatrical prints in 1972 were notoriously bad, grainy and lacking in color; an earlier DVD disc I sampled was very grainy. With this release VCI is promoting a new transfer and leading off with the fact that grain reduction software has been used. Some online sources are squawking but I found the picture much easier to watch than that old DVD. The image is stable.

We’re told that no original elements exist for Children Shouldn’t, but what we see looks awfully clean. The soundtrack is actually more professional than the image, with plenty of suggestive atmospheres and spooky noises in an overall good mix.

We’re told that most of the extras come from an earlier special edition. Director David Gregory hosts two audio commentaries. The HD feature is full length (about 87 minutes) and carries a track with Alan Ormsby and actresses Jane Daly and Anya Cronin. The excited chat goes on for the whole time with Gregory interrupting only to clarify an identity or two. We learn quite a bit about the theater group that became the cast of Shouldn’t; the relationships become pretty complicated. Ormsby makes jokes about his awful wardrobe, but it fits the awful character perfectly. 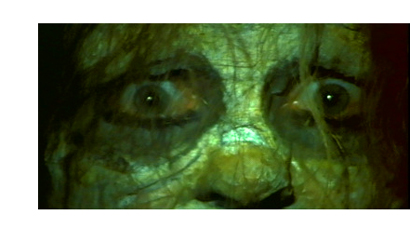 The Standard-Def encoding of the “UK” cut of the film looks much worse, as if it were sourced from a non-interlaced Betacam tape. It’s eleven minutes shorter, with the cuts reportedly coming out of dialogue scenes. For its commentary David Gregory only has Alan Ormsby on the microphone, and they’re able to get deeper into how the show came together, Bob Clark’s career, etc.

We also get a Q&A session at the New Beverly Cinema, a video tribute to Bob Clark, a featurette with the film’s producer and editor Gary Goch, a longtime associate of Bob Clark.

Trailers, a photo gallery, and a tribute video lead into two music videos, by Deadthings and Freak II. And… VCI’s disc shows off a new animated logo.