The bloody adventures of a swordswoman dedicated to murderous revenge provided Quentin Tarantino with a major inspiration. Director Toshiyo Fujita’s impeccable images make the gorgeous Meiko Kaji into an almost abstract superheroine in beautiful cultured dress and hairstyles — and soaked with sprayed blood. 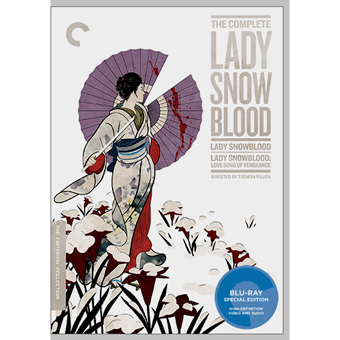 A worldwide revolution hit the movies in the late ’60s, with the relaxing of censorship in the west and the collapse of foreign film industries with the rise of TV. Once home to the busiest film factories in the world, Japan’s output fell precipitously. Influenced by the game-changing genre films from Italy, Japan’s samurai and yakuza films changed radically, applying the cynical worldview of Sergio Leone to Japan’s own polarized politics. The violence became more stylized, with entire films organized around outrageously extreme bloodletting. 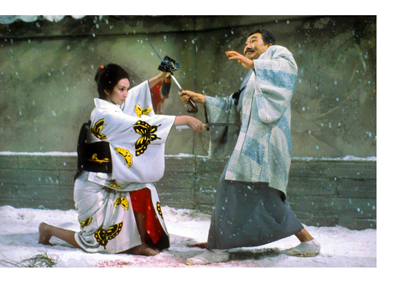 Here in the states, importers gave us a taste of the changes with re-titled re-edits of the trail-blazing slash-fest Sword of Vengeance / Baby Cart series, a hyper-stylized manga adaptation that for violent fixations out-Leone’d Leone. Absurdly unrealistic gouts of crimson blood soaked the screen in all directions, as the sword-wielding hero Itto Ogami slashed his way through armies of opponents. The movie’s physical impact was staggering to American audiences that thought screen violence couldn’t go further than The Wild Bunch or Straw Dogs.

Little did we know that Japanese audiences were taking in much more extreme content, in shows that weren’t imported, such as The Yakuza Papers. Also attracting attention was a sort of female counterpart to Itto Ogami. Criterion’s disc The Complete Lady Snowblood contains both Lady Snowblood films, from 1973 and 1974. If they’ve become more well known here, it’s because fans of Quentin Tarantino identify his Kill Bill movies as a loose, mostly structural remake. This release lets us finally see this dazzling ode to elegant bloodletting in an HD transfer.

Also derived from a popular manga, the first film Lady Snowblood establishes the main character as a poetic avenger dedicated to murder. Yuki Kashima (Meiko Kaji) is not supernatural, but her mother has sworn her to a bloody revenge. Like Charles Bronson’s gunslinger Harmonica in Once Upon a Time in the West, Lady Snowblood begins as an almost ghost-like character. We initially see her in carefully composed and lit scenes, limited mostly to bloody confrontations. Like a lethal Kabuki Doll, Yuki looks harmless. Her only prop is an umbrella, always brandished in complete modesty. Its handle hides a short sword that she uses without mercy. The sword battles aren’t as guignol-graphic as those in Sword of Vengeance but the same sorts of dismemberment outrages occur. Frankly, I think that after seeing these movies, a generation of American film fans must now believe that the Japanese culture is fixated on the concept of slicing up human bodies like butter. I can’t see the average Japanese person feeling flattered by that.

Suffused into the violence is Lady Snowblood’s back-story, a typically grim origin flashback. It opens the picture and recurs to keep our minds focused on Yuki’s mission of vengeance (and to evade the necessity of showing Yuki conducting anything like a normal life). A political component to the origin story refers to the forced conscription of soldiers at the beginning of the Meiji period, when the nation was trying to restructure itself along Western lines. Rural villagers hate the ‘men in white,’ government agents searching out draft evaders. A small band of lawless brigands uses this as an excuse to attack Yuki’s innocent parents. Yuki’s father protests that he’s a teacher but both he and his child are killed anyway. Yuki’s mother Sayo is gang-raped. She dies in prison, but not before giving birth to a daughter that she pledges to vengeance.

Twenty years later the grown Yuki, now a master killer, is checking off a bucket list of bad guys to slay. She’s helped in this vendetta by a radical newspaperman, Ryurei Ashio (Toshio Kurosawa). The idea of Lady Snowblood becoming a legend through literary comment makes her seem something of a pre-manga super-heroine. Combined with the draft protest idea, Ashio’s presence indirectly adds a taste of ’60s political protest.

Visually, Lady Snowblood makes a fine contrast with the tales of Itto Ogami. He wore a ragged kimono, but Yuki is always impeccably dressed. Going into combat, she always looks ready to pose for a classical illustration. Although not bloodshot, her eyes in close-up are ringed with crimson, as if her tears are made of blood. Her ‘delicate’ fighting poses are enhanced with occasional slow-mo and step printed photography. Yuki is constantly being cut and wounded, and Ashio must come to her aid when she’s gravely injured by the evil female among her family’s murderers. The color effects are stunning, the most frequent image being falling snowflakes. They often turn blood red. The effect is especially good in the opening prison flashbacks. Red snow falls outside the window as Yuki’s mother issues her curse, almost like Barbara Steele’s witch in Black Sunday. Lady Snowblood even has an associated song, an ode to death sung in romantic ballad style by Meiko Kagi herself. It was repurposed for Kill Bill, another case of Quentin Tarantino’s all-dissolving eclecticism.

The follow-up film Lady Snowblood: Love Song of Vengeance hasn’t quite the impact of the first; as with any pulp hero who works best as a light sketch, broadening Yuki’s adventures robs her of her hypernatural aura. The literal extension of the story makes her a wanted outlaw for the four murders of the first film (and what, thirty cases of collateral damage?). Too often we’re given less interesting scenes of squads of stiff-looking Japanese cops, in uniform but wielding swords, surrounding Yuki on a beach or street, as in 400 other Samurai offerings.

Yuki hides from the authorities by working as a maid for a radical author and politician, a persecuted Marxist. She resists confiding in anyone but ends up fighting in various skirmishes and rescues when the author is seized and tortured by a sinister government security man. This rather standard-issue cruel bad guy is in cahoots with a politician to benefit by burning out the neighborhoods of the poor in response to fake crimes. The story isn’t particularly clear, and nothing particularly novel develops to equal the first film’s special sense of vengeance-induced fantasy. Beyond the occasional audience-pleasing eye-opener — like Yuki bisecting a hanged man with one swipe of her sword — the images that persist come from the original. When Yuki is peppered with drops of blood or soaked in the spray from a victim’s severed artery, the bright red splatter becomes the one ‘random’ element in her exquisite costume.

An imaginary un-filmed third Snowblood movie could be called “Lady Laundress,” the tale of the ingenious dry-cleaner who can remove soaked-in bloodstains from Yuki’s fine silks and linens. 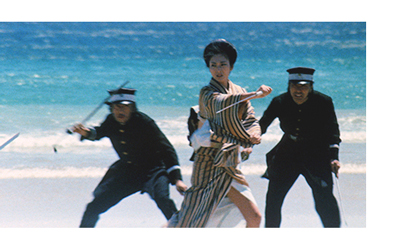 The Criterion Collection’s Blu-ray of The Complete Lady Snowblood gives us sterling presentations of these Tohoscope attractions. Lady Snowblood will serve as a fetish object for viewers that fantasize stunningly gorgeous, ridiculously violent female protagonists — even though the only sex in these pictures is the act of rape. The colors are delightful. Toho’s effects men know how to make snowfall look just like a Christmas card. The evocative nighttime snow scenes make it seem as if Yuki is waylaying miscreants in a Japanese district of George Bailey’s Bedford Falls. The audio is clear as well, to better showcase the occasional modern ballad sung over a montage.

I’d class this single disc, two-feature set as one of Criterion’s classier jobs for a minor but exotic foreign item. (Amazon is currently listing it as it’s #1 foreign-language title for sales.) Disc producer Curtis Tsui located both screenwriter Norio Osada and the source manga author Kazuo Koike for interviews. Original Toho trailers are included. Angie Wang’s attractive cover artwork extends to the insert foldout, one side of which is new Snowblood poster artwork. 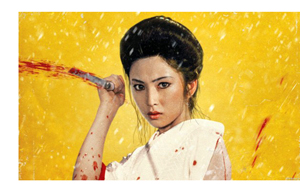 The most helpful aid to a gaijin such as myself are critic Howard Hampton’s insert liner notes. He explains that Sayo, Yuki’s mother in the first film, is played by director Toshiya Fujita’s wife Miyoko Akaza. Hampton relates the two pictures to other international trends, to explain some of Fujita’s stylistic flourishes. And he also brings in a discussion of manga’s effect on genre filmmaking in general. Yuki’s name, we learn, is a corruption of the Japanese name for Snow White.

Also helpful in understanding how the Snowblood saga fits into Japanese genre films is Chris D.’s Yakuza film book Gun and Sword: An Encyclopedia of Japanese Gangster Films 1955-1980. Chris D. is enthusiastic about both installments. He and Howard Hampton rate #2 much higher than I do — I think I respond to the quasi-fantastic element more than the sword-fighting mechanics.