Bloody havoc reigns! Kinji Fukasaku’s no-holds-barred vision of ugly violence and uglier politics on the streets of Hiroshima is a five-film Yakuza epic that spans generations. The film amounts to an alternate history of postwar Japan, that puts an end to the glorification of the Yakuza code. The enormous cast includes Bunta Sugawara, Tetsuro Tanba, Sonny Chiba and Jo Shishido. 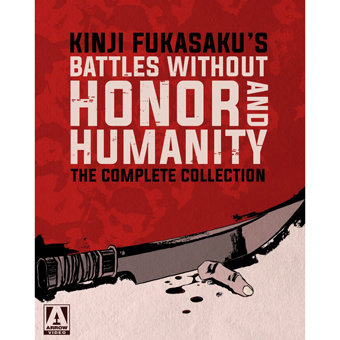 In the 1990s the American Cinematheque was headquartered in various places, but settled for a few years in a large screening room at the Raleigh Studios at Van Ness and Melrose, where thirty years before Roger Corman had filmed several of his Edgar Allan Poe movies. The Cinematheque organizers were young, male, and fascinated by foreign genre films never screened in this country. I think they overlapped with the same male crowd that embraced DVD in 1997, when the format launched a number of companies specializing in foreign product. The Cinematheque showed ‘unknown’ Japanese and Italian crime pictures in addition to foreign classics by lesser known directors, and odd asides such as movies that evoked the ‘lounge’ craze and the Rat Pack vibe.

The interest in exotic genre items proved an opportunity for organizer Chris D., who had an encyclopedic knowledge of Japanese films, especially Yakuza sagas. The Cinematheque imported new prints of one film series that had been extremely popular in Japan, yet was unknown here. Battles without Honor and Humanity is a violent gangland saga recounting the story of Yakuza gangs in a format with more sprawl than Coppola’s Godfather movies. Collectively, the five episodes were called The Yakuza Papers.

Eleven years ago Home Vision released a pricey DVD set of this five-film series, which became a coveted collector’s item. Arrow UK’s The Complete Collection set is a 13-disc monster in both disc formats, fully appointed with extras.

The advice I was given before seeing Battles without Honor and Humanity was, “Prepare to roll with the punches.” That isn’t enough preparation for Kinji Fukasaku’s epic, a grim vision of lowlife Japanese racketeers. Thirty years of gang warfare for control of the streets becomes a perverse history of Japan, a chronicle of the nation’s rise from ignominious defeat to a modern democracy.

The overall impression of the films is one of unending violence. Born in the chaos and lawlessness of the 1945 defeat, the saga is awash in blood and betrayal from the first ad hoc street alliances to seemingly unlimited treachery in the competition for power within the gangs themselves. The clans are organized along business lines, around a credo of duty. A rigid code of honor tasks underlings to make blood oaths to their superiors and remain loyal unto death. The previous decade of Yakuza films focused on ‘good’ Yakuza operatives struggling with the contradictions within the system. Conflicted but honorable men brooded over irreconcilable problems of loyalty. Typically, a Yakuza swears allegiance to one boss but retains a blood-brother association with someone in another gang, which creates a conflict. The resolution is usually a bloodbath followed by a sacrifice, usually a long prison term. The noble Yakuza retains his honor but remains a loser in life.

We’re told that Fukasaku’s The Yakuza Papers was the ‘movie event’ that overturned the established genre formula. Based on true stories of decades of gang feuding, the phrase “without honor and humanity” is entirely accurate. The previous romantic notion of loyalty is a sham from the start. Vicious gangs build rackets out of the immediate post-war climate of black marketeering and national humiliation. The established rituals are all present but not fully practiced. Thugs attach themselves to clans almost in marriage, supposedly waiving all other ties of loyalty, even familial. But some of the soldiers and nearly all of the bosses ignore the finer points of the Yakuza code, and instead work whatever Machiavellian schemes are available to them. Gang personnel expect to see their loyalty and sacrifices rewarded. They are instead treated as expendable assets. Bosses talk up the notion of honor, making promises they have no intention of keeping. Their wives back them up with emotional pledges. When push comes to shove, they only qualities that mean anything are greed and ruthlessness. If that’s not the story of the modern business world, nothing is.

In the first film we meet the central character Shozo Hirono (Bunta Sugawara), a handsome ex-soldier who volunteers to pull off a killing for a group of cowardly gang members. Sent to prison, he forms a friendship with a Yakuza who uses a faked seppuku attempt to secure a release. Shozo tries to be honest with the devious and manipulative boss Yamamori (Nobuo Kaneko). He instead finds himself denounced by aggressively ambitious rivals and hopelessly mired in split loyalties between rival gangs. Shozo’s moral superiority is only a matter of degree. He is a brutal man but he balks at the excesses and hypocrisy of his masters. The love lives of these men tend to be brutal too. The females we see are shadowy figures lighting cigarettes on the sidelines, a few individualized tragic figures, and one or two shrewish, despicable bosses’ wives.

The Yakuza Papers series has a staggeringly complicated plot, one so hairy that it would be helpful to refer to a crib sheet while watching, with a comprehensive story guide and notes on all the characters and their basic relationships, The film series is often compared to the Coppola Godfather films, but the surface style has more in common with Roger Corman’s excellent The St. Valentine’s Day Massacre. Every episode starts with a general statement instead of a capsule plot roundup. The action will frequently pause for freeze-framed introductions of new characters accompanied by clinical text. If you’ve found it difficult to keep straight the names, ranks and clan affiliations in Samurai films, doing so here is next to impossible — five or six quick new faces will flash on screen, and the viewer must fend for himself. Someday soon I’m setting time aside to watch the series again, taking notes as I go.

Shozo’s parole mandates that he remain in Hiroshima even though the gangs are spread between Tokyo and Kobe and across other parts of southern and western Japan. As in Corman’s film a narrator breaks in frequently to leap the story from one violent moment to the next. Long dramatic passages are punctuated by murders and assassinations presented in clinical fashion. Mostly committed by panicky henchmen, they’re sloppy stabbings and shootings with many fumbled attempts. There’s an almost comic sequence in the first episode where Shozo decides to atone for a slight the formal way, by severing a finger; a female moll shows him how to do it while the other Yakuza look on in amazement. The scene makes an interesting comparison with Howard Hawks’ The Big Sky, when the mountain men get Kirk Douglas boozed up to amputate his infected finger. A later Yakuza finger-cutting ritual becomes grotesque. To show the sincerity of his atonement for stealing scrap metal, one of Shozo’s men hacks off an entire hand. As he’s now crippled he’s no longer a useful gang member. All he has proven is that he’s mentally too unstable to be trusted.

In the early episodes Shozo forms strong ties with doomed Yakuza buddies that strive to live up to the code. These relationships give us something to care about in what would otherwise be a completely nihilistic series of rotten deals and betrayals. By the third episode Fukasaku and his writers are veering into political territory, already implied through the constant visual return to that civic building retained as a memorial to the Atomic Bombing of Hiroshima. A major part of one chapter deals with a police crackdown in preparation for the 1964 Olympics.

The third chapter is called Proxy Wars, reportedly to show that the Yakuza strife is a microcosm for the Cold War struggle of the late ’60s. Instead of battling in the open, the Yakuza clans allow captains and sub-chiefs to settle conflicts at a lower level, in much the way that America and the Soviet Union (in some interpretations) nurtured client states to serve as substitute combatants. Proxies do the fighting and suffer the consequences, while the masters are free to disassociate themselves at their convenience.

That’s where Shozo comes unto his own, by refusing to blindly follow orders. At one point Shozo realizes that he’s being set up as an expendable proxy. He dodges that fate by pulling his own careful counter move, an attempt to precipitate the expulsion of his dishonorable boss. Naturally nothing is that easy. Shozo is a practical man but no genius, and it’s interesting to see him find his way through impossible situations.

Fukasaku’s style is anything but traditional. He veers between careful compositions and mock-random handheld shots that impart a feeling of absolute chaos to many of the fight scenes. No scene can be described as formally attractive. It’s not uncommon for eight or ten people to be jammed into the same medium shot. Fukasaku concentrates instead on lending a sense of you-are-there realism to the drama. Like genre films world wide, his style is heavily influenced by cynical Italian westerns. But we also see the free-form aesthetic of American action films, especially blaxploitation movies. The cool soundtrack score frequently resembles the catchy jazz riffs from the black action films. This is the same vibe that Quentin Tarantino adopted for his violent sagas. He borrows Fukasaku’s ‘time out’ freeze frame technique to leap into his own back stories.

Sugawara is a terrific personality for the star role and dozens of players distinguish themselves in strong character parts. American audiences unfamiliar with most Japanese actors will recognize Sonny Chiba from Kill Bill Vol. 1 and Tetsuro Tamba (Tanba) from You Only Live Twice. In parting, I have to say that the title “Battles without Honor and Humanity” grates every time I read or hear it. Shouldn’t it be, “or Humanity?”

Arrow Video’s Blu-ray + DVD of Battles without Honor and Humanity is obviously going to be a special purchase by converts already committed to the glory of Yakuza filmmaking. The limited edition packages six separate keep cases in a card box, each with Blu and Standard pressings of one of the films: Battles Without Honor and Humanity, Hiroshima Death Match, Proxy War, Police Tactics and Final Episode. A sixth item is a 3.5-hour cut-down, The Complete Saga, presented for the first time with English subtitles.

I have the old Home Vision DVD set, and the Blu-ray is noticeably improved, if not greatly. Both transfers are slightly greenish at all times, a quality common to many Japanese genre pictures on disc. The new Blu-rays are a bit darker than the old DVDs. The audio seems very strong to me.

The first film has a commentary by Stuart Galbraith IV, who points out the score of violent crimes that are committed in just the first couple of minutes. At one point he describes the exact process of finger cutting, including what doctors did in the way of first aid when a self-mutilation case came in. Stuart sketches a vivid word picture of Battles’ place in Japanese film history and its major impact on an industry then in collapse — ’70s genre pictures in Japan rebounded with increasingly extreme content. Spread across the other discs are interviews, interview documentaries, trailers. The Complete Saga cut-down was released theatrically in 1980.