Yasuzo Masumura takes horror into kinky territory in an Edogawa Ranpo shocker about obsession, namely, mixing sex and death. Michio is the tactile-fixated blind sculptor who imprisons model Aki to serve as an ultimate objectified ‘body’ — but she eventually joins him, taking the lead on a delirious suicidal journey of discovery. Probably once considered pornographic, the 1969 show is fairly tame by today’s NC-17 standards, and not as radically violent or abhorrent as one might expect — but it’s still loaded with weird, Dangerous Ideas. The sets are not to be believed — the unhinged artist lives in a surreal workspace surrounded by hundreds of oversized sculptures of body parts. 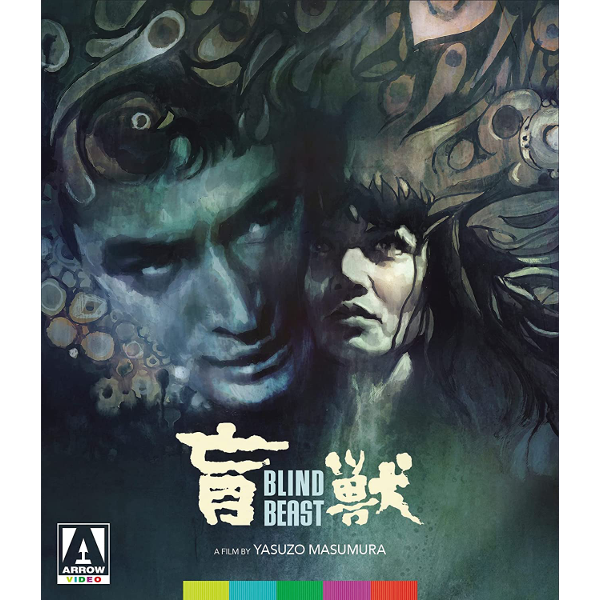 Is there still such a thing as taboo in films?  When I was growing up almost everything was taboo, starting with simple nudity. This review assesses a movie in the context of Japan 1969, when that country’s film industry was trying to survive by becoming more adult and exploitative.

The Incredibly Strange Films book and Amos Vogel’s Film as a Subversive Art certainly opened doors to transgressive pictures I personally don’t necessarily need to experience. I was curious about Brakhage’s The Act of Seeing With One’s Own Eyes but when it became accessible I wasn’t tempted to take a look. It’s all a personal decision. It was good to subscribe to fifteen years of Video Watchdog … to be informed about occcasional films I really didn’t want to see.

But then there are movies given endorsements we couldn’t ignore. Phil Hardy’s Encyclopedia of Horror Movies lit up our brains in 1985 with listings for pictures we’d never heard of, some of which came under the heading ‘beyond the pale.’ Hardy’s Brit reviewers leaned pretty hard on hypocritical gore-oriented films, many of which seemed wholly misogynistic. But among the titles given rave write-ups was Yasuzo Masumura’s The Blind Beast, often called Moju. The source story is by the macabre writer Edogawa Ranpo.

Blind sculptor Michio (Eiji Funakoshi) creates a huge studio-prison packed with gigantic sculptures of female torsos and outsized anatomical features. Helped by his doting Mother (Noriko Sengoku), he kidnaps Aki (Mako Midori), a model whose body he admires, and forces her to submit to his plan to sculpt a masterpiece from her by feel alone. Aki tries to escape through deception and seduction, but her efforts take an unexpected turn. She reacts positively to Michio’s repeated rapes (!) and buys into the psychological side of his trangressive aesthetic, in which tactile sensation is all. Aki eagerly joins Michio, and takes the lead in their descent into sado-masochistic obsession. In the dimly lit studio she begins to go blind as well. Needing pain to achieve greater degrees of stimulation, their relationship spirals out of control toward torture, mutilation, and death.

Moju uses the framework of the horror genre to launch into its own private world. The story setup is similar to that of Georges Franju’s Eyes Without a Face, Jésus Franco’s Gritos en la Noche, William Wyler’s The Collector and Pedro Almodóvar’s ¡Átame!. The obvious impediment to neo-PC values is the fantasy that a sex prisoner would enthusiastically enlist in her captor’s obsession. Previously a model for bondage photos, Aki already found herself aroused when watching Michio fondle another artist’s sculpture of her form. She eventually embraces her role an an ‘ultimate object’ in his artistic (Onanistic?) pursuits.

Into the Realm of the Senses

With the rest of the world blotted out Masumura creeps into his main themes and never comes back. The storyline becomes less realistic, even as Aki’s voice continues to offer occasional ‘rational’ narration. She begins as a potentially interested fetish partner, reacting with a reflexive erotic charge to the mere sight of Michio caressing a sculpture. Once she becomes a prisoner, she tries in various ways to trick him, and even while seducing him retains a basic rejection of what’s going on … she just wants to survive and get out. In this first stage of captivity Aki resembles in costume and gesture the disoriented Natasha Von Braun of Alphaville. She’s costumed similarly, and flails her arms about as she avoids the blind Michio, as if patterned after the Jean-Luc Godard film.

It’s only when Michio rapes Aki repeatedly that she changes her mind, or more directly, her body changes her mind for her. That’s the unacceptable PC ‘MeToo’ angle. Although Michio and Aki’s situation is wholly exceptional, the implication remains that women derive the greatest satisfaction from being dominated by men — and then taking the lead in carrying out a male’s rape fantasy. Is there any truth to that proposition?  Nonetheless, if you believe that a healthy relationship between two people can be anything, then Moju is indeed a love story. In their twisted fashion Aki and Michio are tender, caring, and faithful unto death. The questionable intellectual fantasy nevertheless connects with the human condition.

Michio believes that touching, the tactile sensation, is an art in itself. One legit idea that transcends Michio and Aki’s specific obsession is that overstimulated senses develop a resistance. As Aki and Michio blot out all existence outside the pursuit of pleasure they become trapped in a spiraling need for stronger sensations. And there’s certainly the germ of the Death Wish built into sex, that seems a fundamental part of the human character. In its own delirious way, Moju makes one think about all these ideas, and more. It’s both perverse and legit; it pushes the boundaries of screen horror in a weirdly non-exploitative way. 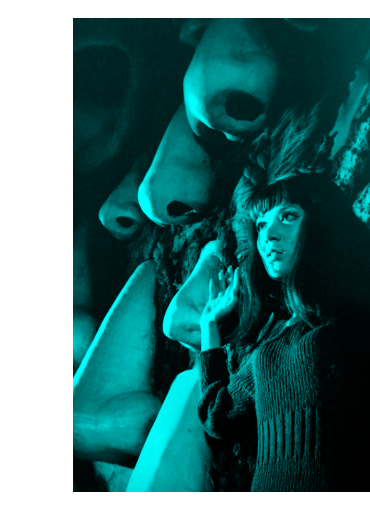 Are we over-analyzing this movie, or what?

Maumura’s art directors eagerly express Michio’s tactile obsessions in the film’s bizarre setting. The blind sculptor is fixated on the huge, disembodied anatomical features and the giant, soft female ‘bodies’ that fill his studio. When Aki climbs between the breasts of a giant reclining figure, the upholstered ‘flesh’ gives way. She confronts Michio with the assertion that he’s a pitiful infant, seeking some kind of ultimate Mommy. Michio’s surreal journey began without a real need for another person, merely an object to accede to his self-oriented desires. The relational questions arise only when he and Aki seem to function as a caring, if conventionally perverse, unit. Are they pioneers of heightened consciousness, bravely choosing to exist outside the plane of normal human behavior?  Or are they merely addicts to a strange passion that chooses death over life?  Are they just enabling a mutual masochistic suicide?

(spoiler) Reviews of Moju often limited their comments to a variation on “This is a sick film.” Some critics say it has a comic aspect, or presents some of its content in a tongue-in-cheek way. It never gave me such an impression; perhaps the commentators are referring to the absurdity of the competition for Michio between Aki and his nutty mother. Much of the movie is told in past-tense narration by Aki. She continues to narrate even when we’re looking into her dead eyes, creating a strange hallucination-dislocation. Is Aki’s departed soul telling the tale of her descent into morbid ecstasy?

The artistic rebel Yasuzo Masumura attacks Moju as an aesthetic problem, using his directorial skill to weave a near- absurd concept into a grandiose exercise in delirium. He does the same for business values gone insane in Giants and Toys. His soapy tale of marital infidelity Manji dives into psychological domination and murder with a sadistic gusto far stronger than any American film noir. Should you wish to veer off the path and into the wild side of international horror Moju is an exotic starting point.

And who knows, a date movie can now be anything. An unusual special effects scene in Pedro Almodóvar’s Oscar-winning Talk to Her (2002) depicts a faux-silent movie in which a tiny man is confronted by an enormous naked woman… and enters her. Unllike Moju, the movie proper is overwhelmingly compassionate and humanistic, even if it is likely to offend multitudes. It was originally only rated ‘R.” 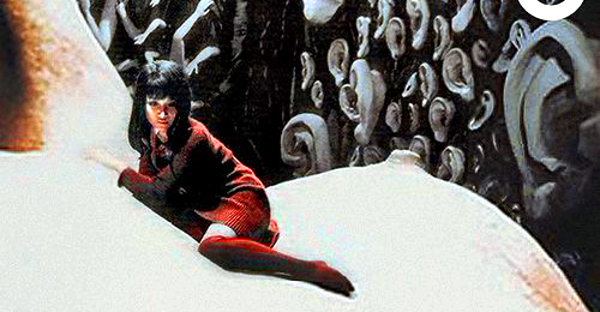 Arrow Academy’s Blu-ray of The Blind Beast (Moju) is the expected lavish presentation of this minor masterpiece of transgressive horror, Japanese style. The image betters by far the pioneering DVD released by Fantoma in 2001. Arrow has been releasing Masumura classics lately: Black Test Car, Giants and Toys and Irezumi. So far every Masumura film has been a revelation.

Arrow gathers its best experts to explain the highly original Moju. Tony Rayns tells us that Yasuzo Masumura was asked to create an exploitative, hot sex film by the failing Daiei, which was trying to retain a theatrical audience by upping the sex quotient. Masumura’s choice of an Edogawa Ranpo tale was approved but the director developed the idea toward full-on masochistic mutilation and suicide. The result wasn’t successful but it certainly became notorious.

Who knows what constitutes ‘extreme content’ any more?  ‘Sick’ is in the eye of the beholder. Tod Browning’s 1927 The Unknown is loaded with sick ideas but shows on TCM all the time. What’s acceptable as entertainment is always a personal decision. In graphic terms Moju is definitely softcore. The nudity is restrained and there is almost no blood involved in the absurdly horrible stylized finish. Does its morbid fantasies and wanton self-destruction seem more legitimate because Masumura avoids the obvious trappings of exploitation?  Of all the forbidden titles Savant has hesitated to take in The Blind Beast / Moju is the most satisfying so far. It’s an exciting, challenging art-horror movie.

The IMDB gives Masumura’s film an American release date of April 1969, which I’m guessing was on the Japanese theater circuit. But CineSavant consultant ‘B’ only found a tentative public screening, five years later, under the title Warehouse:

“Moju was commercially screened in NY for two days in the fall of ’74. The First Avenue Screening Room was an innovative if short-lived East Side house which often specialized in running movies which had never been otherwise locally released for one reason or another. It had recently presented the American theatrical premiere of Kurosawa’s Dodes’ka-den (1970). The First Avenue booked Moju, advertising it as a preview with Fassbinder’s Ali: Fear Eats the Soul. It screened only four times, twice at noon and twice at midnight. It is possible that Moju subsequently had a regular booking at the theatre. Nora Sayre reviewed it for the Times.”

Sayre found value in the first half of the movie, comparing it to The Collector. But she continued, “However, the film turns clownish toward its conclusion, when the ill-mated pair become lovers, then take bites out of each other’s shoulders and hack each other up with knives. (All this occurs on a 70-foot reclining rubber nude.) The woman becomes a raving pain buff, and the movie eventually suggests an Oriental parody of   The Night Porter.“