Writer-director Elio Petri scores big in his first feature, the story of a heel suspected of murder. Is he a killer, or just an average guy trying to get ahead, who uses women to his advantage? Marcello Mastroianni impresses as well in a serious role, with Salvo Randone shining as the police inspector trying to pry a confession from him. Beautifully restored in HD; the show is from a time when Italian film was at its zenith. 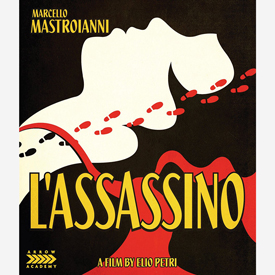 Fans of Elio Petri’s Investigation of a Citizen Above Suspicion will be intrigued by the director’s first feature film The Assassin, presented by Arrow in a top quality presentation. Arrow has also lately given us Petri’s Property Is No Longer a Theft, another rewarding experience. Elio Petri is definitely a filmmaker ‘with something to say.’ 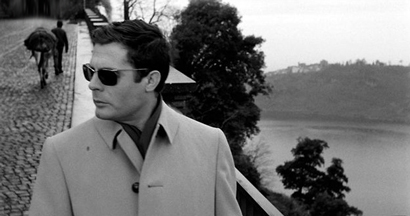 The title is somewhat misleading. The Assassin is a character study and a critique of Italian society in 1960, when the postwar recovery was really taking off (for some people). With his foray into science fiction Petri would settle into more pointed social criticism, but this show is less direct. A crime investigation is pursued in an unfair way, because of the nature of the accused. It’s an in-depth character study, not a satire; and is yet another Marcello Mastroianni character in which he plays a character role, not the carefree lothario we know from the Sophia Loren comedies.

Antiques dealer Alfredo Martelli (Marcello Mastroianni) is picked up from his swank apartment after another night of Tomcatting around Rome. The police at first play coy, gently grilling him, playing good cop / bad cop, hoping he’ll trip himself up. They suspect him of killing his ex-lover Adalgisa De Mattheis (Micheline Presle), a wealthy woman presently building the ‘Sangri-La,’ a hotel and restaurant on a beach property. Alfredo is upset because the notoriety of being a suspect will ruin his bid to marry Cristina Gaioni (Nicoletta Nogaro), an attractive but not too bright younger woman whose father is rich, rich, rich. They’re engaged, but haven’t told her father because of his disapproval.

The chief inspector on the case Commissario Palumbo (Salvo Randone) and his men drag Alfredo all over, tying up his day, making him wait, putting on the pressure. Alfredo can’t deny that he visited Adalgisa the night before. They drive him down to the hotel to see if he flinches at being at the scene of the crime, and to see if anybody recognizes him. Palumbo has already prejudged Alfredo because of his character — the more they learn of his background, the less they like him. All they need is something concrete to cap the circumstantial evidence stacked against him.

The title The Assassin prejudices us against Alfredo as well, especially when we see flashbacks showing what kind of guy he is. Petri’s show is outside normal genre boundaries in that the crime is not depicted and we never even see the body. There is no explosive reveal followed by a chase scene. The film has a much more sophisticated agenda. Director Petri presents his flashbacks adroitly, reinforcing various spokespeoples’ negative opinions of Alfredo. We see his sharp business dealings, buying an antique for a song from a ‘distressed’ seller and then turning the items around for an incredible profit. Nothing is actually illegal, yet he gives entrepreneurship a bad name. 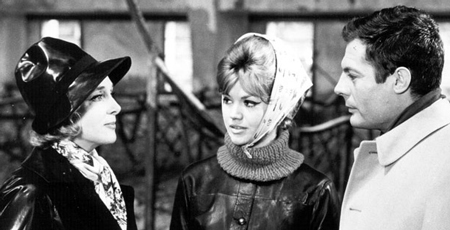 Alfredo’s relationship with Adalgisa isn’t exactly honorable either. He originally worked for her husband, and then started his own business with his clients and took her away to be his lover. As he became more successful, Alfredo cooled on Adalgisa, instead cultivating the younger Nicoletta as the perfect trophy wife. Alfredo seems well aware that once they’re married her daddy will be more than generous. Meanwhile, he’s still seeing Adalgisa from time to time. The cops are convinced that he killed her because she was gumming up his plans — she kept both Alfredo and another man (another lover, perhaps) in suspense by promising and then withholding money. Everybody has ambitious business plans, and anybody in a position to loan large sums is bound to be popular.

The Assassin works on the here-and-now level, putting us through a first-person ordeal along with Alfredo Martelli. Hoping to really shake him up, the cops toss him in an uncomfortable cell with two undercover cops pretending to be thieves. The cellmates pull an elaborate charade to work up Alfredo’s emotions so he’ll confess. Alfredo sometimes accepts the abuse and at other times he’s vociferously indignant. He’s a little bit like Anthony Perkins’ ‘K’ in Orson Welles’ The Trial — he’s basically so selfish that we sometimes side with the cops. 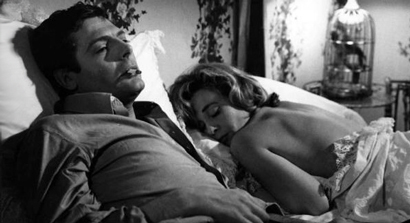 The thesis in play is less about guilt and innocence than it is values in general. Justice doesn’t rate too high on anybody’s list of priorities. The cops sneer at Alfredo’s venality even as they acknowledge that money and self-interest runs everything. Alfredo considers himself a self-made man, even with the knowledge that he had to maneuver himself into Adalgisa’s good graces, and establish a personal relationship, to get anywhere. In other words, it’s assumed that many of the newly wealthy in the economic recovery got what they got through ‘original sin’ — they may operate on the level now, but when money was tight the only way to get started was to pull off something dishonest. The Assassin is not the kind of leftist show that says all capitalist business dealings are corrupt, but Petri does reflect on the spirit of the times as he sees it. Alfredo does what he does to escape a hand-to-mouth existence, and make himself better than those around him. He’s an everyman heel.

Seen only in flashbacks, Micheline Presle’s Adalgisa is something of an unknown quantity, a woman approaching middle age who apparently teases her lovers with talk of loans, so as to keep their favors coming. Yet she’s not unlikeable either. As embodied by Cristina Gaioni (Flesh for Frankenstein), Nicoletta reminds us of Heather Sears in Room at the Top, a clueless innocent who doesn’t realize that men like Alfredo want them for reasons other than love, and that their minds are on personal security and success. 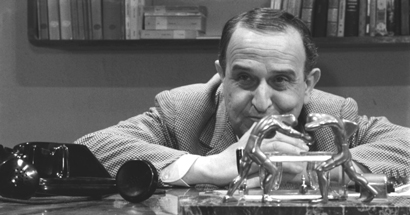 Actor Salvo Randone gives quite a performance here, one to be compared to Gian Maria Volontè’s in Investigation of a Citizen above Suspicion. Commissario Palumbo’s manner shifts constantly, aiming to knock Alfredo off balance. Palumbo has his own theories about the nature of society. All he sees in his work are cheaters of one kind or another, chiseling with their money deals or pulling confidence games on unwary associates.

I won’t reveal the ending, which has some subtle tricks up its sleeve, just enough to make further pungent comments on the nature of men like Alfredo. We admire the quality of the film’s dialogue and general storytelling. Elio Petri was already a respected screenwriter, and his co-writers Tonino Guerra (L’Avventura, La notte) and Pasquale Festa Campanile (Il Gattopardo, Rocco and His Brothers) were top men in their field as well.

Arrow Video USA’s Blu-ray + DVD of The Assassin is yet another major Italian restoration, with an impressive widescreen scan that flatters the good compositions of cinematographer Carlo di Palma. We see less than glamorous parts of the city, and Petri’s aim is yet another modification of Neorealism, one without a docudrama look. Aiding quite a bit is the jazzy music score by Piero Piccioni, who later made an even more impressive contribution with his ‘futuristic’ jazz for Petri’s The Tenth Victim. 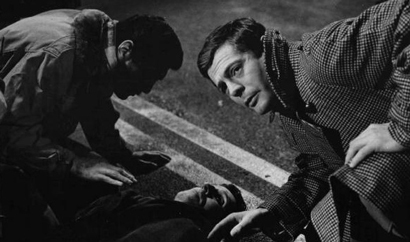 Once again Arrow comes through with choice extras, which are duplicated on the DVD. Italian critic Pasqualie Iannone offers a good introduction to the film, while an hour-long documentary on writer Tonino Guerra reveals a warm, thoughtful man behind his intimidating list of film credits. A trailer finishes up the video extras. A fat insert booklet carries an essay by Petri biographer Camilla Zamboni, and some of Petri’s writings from the 1950s that allow him to express his political preferences in cinema. A selection of chosen reviews is revealing as well — although The Assassin was received well in Italy, it didn’t play the United States for four years.