Can radical theater make a good movie? Elio Petri continues his string of biting social comment movies with a black comedy about rich people, thieves, and the notion of ownership — it’s a caustic position paper but also a funny satire, with quirky yet believable characters. Ugo Tognazzi is terrific as scheming capitalist, as much a prisoner of his wealth as a poor clerk is of his poverty. 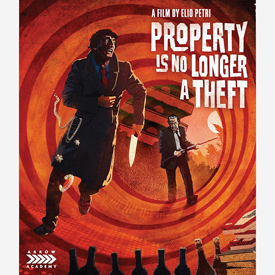 The philosophical argument of materialism vs. theft gets an oddball thriller workout in Elio Petri’s flip, funny and challenging satire Property is No Longer a Theft. One of the most articulate of Italian ‘committed’ directors, Petri didn’t stop with his classic sci- fi satire The 10th Victim or his political masterpiece Investigation of a Citizen Above Suspicion. Another Petri film turned the union struggle into a gripping entertainment as well. 1973’s La proprietà non è più un furto is political comedy with a message — a crazy social argument, actually. It’s stylized just enough to bring up abstract ideas, yet takes place in a world we recognize and acknowledge.

Italians made reams of left-wing political movies, some tiresome and abstract (Partner.), and some tiresome and literal (Open Letter to the Evening News). But quite a few make their political points with great power. Elio Petri and Francesco Rosi top the list of committed directors; and after actor Gian Maria Volontè finished with Sergio Leone’s westerns, he committed himself only to movies with a progressive political message.

Property is No Longer a Theft has a real sense of humor. It’s a clever black comedy with characters that parade like stereotypes yet also feel like individualized people. The show starts out with a frustrated poor man formulating a strategy to act on his idealistic beliefs. Elio Petri’s saving grace is that the human element is never lost — we love his crazy characters. The show is much more than a radical thesis, a cold-blooded essay in which a ‘social evil’ defeats everyone, like Robert Bresson’s L’argent. 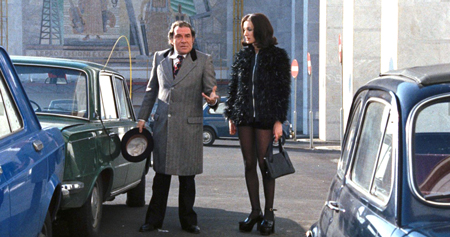 The gaunt, nervous bank clerk Total (Flavio Bucca of Suspiria) itches at work all day because he’s allergic to the money he handles. He lives in poverty with his sweetheart of a father (Salvo Randone), a philosopher who believes in the rightness of theft. Every day, a rich butcher (star Ugo Tognazzi) comes in and deposits large sums from his stores, and gives out fresh meat to the manager and director. He demands and gets a huge loan simply by threatening to withdraw his account. Special attack dogs foil a bank robbery; The Butcher is given the luxury of kicking one of the thieves, just to make him feel good. This apparently pushes Total over the edge. He requests a modest loan on the record of his honesty and service, and when the bank director (Julien Guiomar) turns him down, he resigns. Total then commits himself to satisfy his personal need for freedom from oppression by making life hell for The Butcher. The Butcher’s upscale shop resembles a church. Total watches him dispense meat, ignoring the women that claim he’s cheating on the weight. Total steal’s The Butcher’s lucky knife, the one he learned to cut meat with decades ago. The Butcher’s cashier Anita (Daria Nicolodi) is also his kept woman. She’s expected to dress provocatively and service him sexually at all times.

Total extends his harassment into a campaign of theivery that ties Total, The Butcher and Police Brigadier Pirelli (Orazion Orlando) together in a catch-22 of cross-purpose corruption. The Butcher exaggerates Total’s burglary to cheat the insurance company; Total blackmails a master thief named Albertone (Mario Sciacca) to continue his ‘idealistic’ crimes, not realizing that Albertone is the guru of an entire criminal underworld that believes theft is a necessary part of civilized society. Although he cuckolds The Butcher and forces him to admit defeat, Total doesn’t enjoy any satisfaction from his game. When The Butcher offers to make Total his partner, that’s not a solution either. 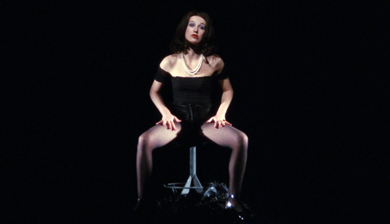 Applying a rigid political thesis to a story usually isn’t a good idea, as people aren’t abstract ideas. When filmmakers as them to serve as walking symbols all the fun goes away. Liliana Cavani’s I Cannibali feels like somebody is wagging a finger in our faces, but then forgets to give us a reason for its furious political violence. Elio Petri has never had that problem — the story is clear and the characters interesting. Petri allows radical theater to intrude into his narrative, when scattered scenes fade up on a dark stage, watching one of the main characters head-on as he or she recites a personal, poetic speech about his or her self-image and motivation. It works like a charm. Even Anita gets to the heart of her personal problem… she knows that she’s being exploited as a piece of property. She likes being another of her boss’s slices of meat, no matter how boorishly The Butcher behaves. That may not be politically correct, but it’s also not an example of the rampant misogyny seen elsewhere in ’70s genre filmmaking. How else does one explain the willingness of women to live with human pigs like The Butcher?

The movie’s notion of property being evil isn’t convincing, but it is consistent. The poor are insecure for lack of property and the rich make greedy grabs for more because they fear it being taken away. In an amusing scene The Butcher and Anita attend a security show where a salesman-emcee demonstrates ‘Diabolik-proof’ doors and a device that kills car thieves with poison gas. The demo actor is dressed in a Mario Bava-like Diabolik suit and facemask!

Total wants the power and potency that money conveys, but he doesn’t want the money itself. In his twisted philosophy (called Marxist-Mandrakism) theft is a good thing because one is not directly tainted by the evil stuff. Total’s dad loves the goodies his son steals from the market, but also wants to deny that any wrongdoing was involved in obtaining them. Total helps the amusing master thief Albertone steal a stack of priceless furs, but blows a fuse when he sees how little the greedy fence Mafalda (Cecilia Polizzi) is willing to pay for it. The frustrated policeman can’t even begin to do his job. Rich people and a priest are by definition above suspicion, but when he catches Total his men can beat him up just as professional bonus. A eulogy for a thief turns into a sermon that theft is necessary to make the world function, an argument that seems 100% bogus no matter how it’s presented. But when the cops, the rich crooks and the poor thieves are all entangled in the same hypocrisy, any radical philosophy might seem inspired. 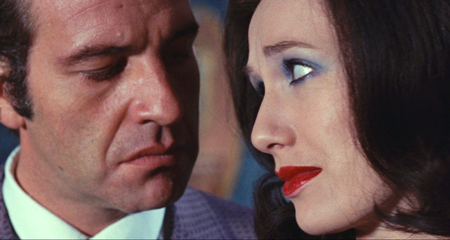 Elio Petri’s cameraman Luigi Kuveiller films the show in great style — midway between lush visual play (all those beautiful stylized interiors) and unflinching close-ups that seem to soak up the strong emotions between the characters. Daria Nicolodi is a stunning self-satisfied sex toy, forever dolled up in vulgar designer hot pants and demeaning platform shoes. Flavio Bucci combines erratic neurosis with the instincts of a master criminal. Orazio Orlando and Julien Guiomar are Petri regulars, and Guiomar will be remembered as one of the corrupt generals in Costa-Gavras “Z”.

This is a great movie in which to appreciate Ugo Tognazzi, who art devotees will know from La Cage aux Folles and Le Grande Bouffe. Far from being a stock villain, Tognazzi makes the selfish, greedy, bullying Butcher into an intensely likeable and funny guy. He’s a bit like the great actor Lionel Stander, but not as broad in his playing; The Butcher is an honest crook in that he’s just doing what comes naturally. In terms of acting, he pretty much overpowers the less experienced Flavio Bucci, but that’s okay. The younger self-styled revolutionary wants to fleece the rich yet stay morally above the fray, and you can’t have both. Even Robin Hood must eventually face the fact that he’s as much of a crummy crook as his enemies. 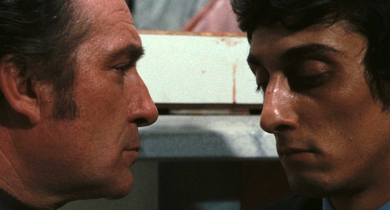 Elio Petri’s political movies are satisfying because he isn’t asking us to accept what we see, just consider its possible significance. I wouldn’t call Property is No Longer a Theft a comedy with big laughs, but its crazy ironies definitely make us smile.

The ‘essere o avere’ mantra, by the way, is a philosophy about materialism often ascribed to Erich Fromm. Do you want To Have, or do you want To Be?  Personally, I’ll settle for a little of each.

Arrow Video USA’s Blu-ray + DVD of Property is No Longer a Theft is a gorgeous, faultless transfer of this attractive high-end Italian production. The package touts a new 4k restoration. Luigi Kuveiller had just filmed Billy Wilder’s Avanti! and would move on to Dario Argento’s best-looking Giallo, Deep Red. The masterfully mixed soundtrack features a score by Ennio Morricone, music that pops in only for transitions. Favoring a deep contra-bassoon (I think), it sounds a bit like the main theme for The Hateful Eight.

Arrow’s extras again hit the bull’s eye, with three interview pieces. Those Italians really know how to talk non-stop, a quality that I remember well from those great old No Shame discs. Actor Flavio Bucci, looking hale and hearty, recounts everything he remembers about the times, Elio Petri, and his starring role. The producer Claudio Mancini speaks at length; he served as production manager on several Leone classics before advancing to producer on Duck You Sucker. The third interview is with the makeup man Pierantonio Mecacci. The first pressing only contains a color illustrated insert booklet, with an essay by Camilla Zamboni that has plenty to say about the production as well as the lowly Total’s one-man rebellion against The System.