This knockout comedy rates as one of Hollywood’s funniest ever — although it could be ‘cancelled’ any day now, so get ready to deny ever having laughed at it. Ultimate movie star glamour meets the apex of screenwriting hilarity: liberated by 101 cross-dressing jokes Billy Wilder and I.A.L. Diamond jam sly sex innuendo into almost word spoken. We still don’t know how the censors passed one of of Marilyn Monroe’s costumes: Raymond Durgnat described the resulting visual effect as ‘The Hanging Gardens of Marilyn.’ Everybody’s tip top in this one: Jack Lemmon prances, Tony Curtis does his Cary Grant imitation, and Billy Wilder tosses in a score of his favorite 1920s tunes. Right up there with the best comedies ever made, Some Like It Hot is Billly Wilder’s funniest and lightest film, a gangster spoof about cross-dressing musicians — you know, Boys Dressing Up As Girls (BDUAG). It’s also Wilder’s sexiest comedy, thanks to Marilyn Monroe’s turn as the addle-brained Sugar Kane Kowalczyk. Wilder and I.A. L. Diamond’s affectionate screenplay allows Marilyn to transcend the dumb blonde stereotype by leaps and bounds. The film’s career-defining star performances even extend to the guest stars Pat O’Brien and Joe E. Brown, who get big laughs. Anybody who hasn’t yet seen this gem has a great experience coming.

The prime story inspiration came from a Weimar-era German comedy with an even more explicit cross-dressing theme. On St. Valentine’s Day in 1929 Chicago, musicians Jerry and Joe (Jack Lemmon and Tony Curtis) have the bad luck to witness a gangland rub-out ordered by gangster Spats Colombo (George Raft). Their only avenue of escape is to dress as women and join an all-girl band heading to Florida. What at first seems impossible becomes all too easy. Jerry’s disguise seems to transform him into a girl in more than just appearance. When womanizer Joe lives so close to his chosen prey — hot dish lead singer Sugar Kane (Marilyn Monroe) — he experiences romance from the other side of the sex divide.

Female impersonation was always a staple of broad burlesque-oriented fare. Some Like It Hot is perhaps the first cross-dressing film in English to directly address gender politics. And there’s definitely a bit of subversion in the film’s subtext: much of the humor observes that the gap between the sexes may not be as wide as we thought. Wilder and Diamond play with this notion while mining every situation for provocative hilarity.

We’re accustomed to obvious impersonation skits but Tony Curtis and Jack Lemmon are almost disturbingly credible when dressed as women. Jack purposely makes ‘Daphne’ look a little ridiculous when running, and even just walking. But the fine-featured Curtis was always a bit too beautiful, as was pointed out in the previous year’s Sweet Smell of Success: “He’s the boy with the ice cream face.”  As ‘Josephine’ Curtis carries himself exactly like a late-20’s flapper. One of the ‘fashion show’ models in Singin’ in the Rain wears an almost identical outfit, and could have been the template for Curtis’ ‘look.’

Two other components add complexity to the cross-gender illusion. Jerry/Daphne almost immediately discovers the female side of his personality: he suddenly develops opinions about clothing and a preference for the name Daphne over Geraldine. His responses to the cartoonish overtures of Joe E. Brown’s Osgood Fielding III are some kind of weird female fantasy. The original male Jerry considered himself a loser in love — is that he enjoys being pursued while masquerading as a woman?  Jack Lemmon is uproariously funny, but the comedy carries a slightly giddy tension. How can Jerry/Daphne’s identity crisis possibly be resolved?

Curtis’s Joe, a confirmed ruthless cad, learns fast lessons in the sexual double-standard: every creep and bellboy feels entitled to make crude passes. When in drag as Josephine he hears how women talk when a loverboy like himself is not around. Marilyn Monroe’s Sugar Kane is terminally vulnerable to the attentions of a certain kind of predatory male. Joe/Josephine at first eagerly exploits this inside knowledge. He becomes a male masquerading as a female masquerading as a male, in this case, a fake millionaire with a Cary Grant accent. Joe undergoes a major attitude shift: Wilder and co-writer I.A.L. Diamond allow him to melt to a degree where he’s capable of truly falling in love. For a movie made by a supposedly cynical director, Some Like It Hot is a sentimental career highlight. 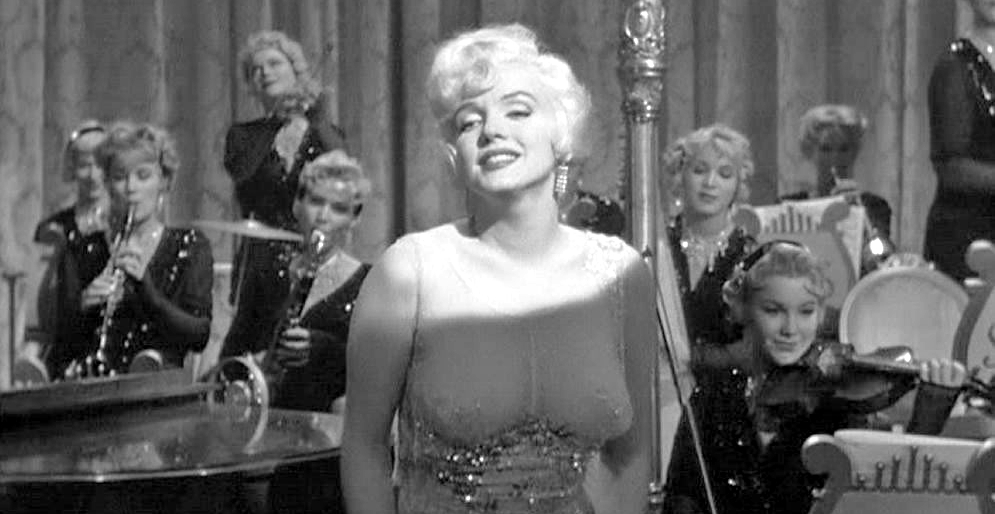 Marilyn Monroe was the star sex attraction of her time but also the source of many headaches during filming. Wilder admitted that her incandescence was unique, however. While waiting for Monroe to come out of her trailer, Wilder noted that when she did make it to the set she was incapable of remembering her lines. Wilder had to carefully pry Marilyn away from the coddling of her personal acting coaches. Tony Curtis and Jack Lemmon had to be spot-on with every line reading in every take, as nobody knew when the dialogue-flubbing Monroe might deliver a usable performance.

The finished movie shows none of this chaos. Monroe exudes more sex than in any of her other features. The role allows her to be both a Lorelei Lee gold digger and profoundly sweet. How Wilder got away with a couple of her gowns is a Hollywood miracle. One looks literally spray-painted on and is lit by cameraman Charles Lang to enhance every curve. It inspired many a childhood fantasy … to quote Osgood Fielding: “Zowie!”

Gangland violence anchors the comedy, and Wilder’s machine guns are as frightening as in any straight underworld tale. The massacre scene is fairly explicit, yet the ugly-mug goons Mike Mazurki and Harry Wilson also evoke nervous laughter. The ‘affectionate’ gangland casting extends to the presence of Nehemiah Persoff as a Capone-style kingpin. George Raft’s gang boss role is more substantial than many of his classic roles of the ’30s; his flat delivery contrasts well with the extreme personalities around him. Gangland veteran George E. Stone (Little Caesar) gets a nice late career showcase, too.

The girls in the band are a jolly pack of jokers — we intuit that they would immediately intuit that Daphne is really a man, even if they are ‘virtuosos.’ Grace Lee Whitney is in there somewhere unbilled, along with sci-fi regular Laurie Mitchell (the Queen of Outer Space). Elsewhere the Wilder-Diamond brand of vulgar humor runs happily amuck, especially through the suspicious bandleader Sweet Sue — comedienne Joan Shawlee at her best.

In the extras Tony Curtis mentions that ‘some’ of his voice as Josephine was added by another actor whose name he cannot remember. But in 1999 correspondent Bob Gutowski told us that Tony Curtis’s Josephine was fully dubbed by vocal specialist Paul Frees. It’s a pretty amazing job: as soon as we’re tipped off we recognize Frees’ chameleon voice. It’s covered in an early DVD Savant article.

Like many other Billy Wilder greats Some Like It Hot now has (slight) commercial limitations because it wasn’t filmed in color. Wilder did color tests to see if the ‘boys’ might look too grotesque in drag. But he just liked B&W better, and continued right through the ’60s mostly avoiding color and stereophonic sound. He did embrace Panavision for his next six pictures straight, starting with The Apartment.

Further descriptions of the sharp characters, the clever plot, the amazing range of the jokes, Jack Lemmon’s syncopated maracas scene or the famous ending are unnecessary, as practically every scene and dialogue exchange in the show is a classic. The trick to enjoying Some Like It Hot is to find someone who has never seen it and treat them to a screening. The picture is so entertaining and funny, it could be advertised as good for one’s general health.

The KL Studio Classics 4K Ultra HD + Blu-ray of Some Like It Hot 4K gives Billy Wilder’s laugh-fest the jump to the improved format. We can definitely see the improvement on a large screen. SLIH has always looked great, even in 16mm, but this sharp and rich image reminds me of the perfect studio prints we saw at UCLA. We can imagine that we’re in the famed preview screening that didn’t go so well — except for one consistent laugh from the middle of the audience. It happened to be TV personality Steve Allen, who knew funny when he saw it.

Charles Lang’s cinematography nails the film’s look, from the sunny ‘Florida’ beach to fantastic images of Marilyn slinking from the sofa to the bar on Osgood’s luxury yacht. The audio track is finessed for different locations: – the atmospheres vary for the freezing Chicago garage and the echoey hotel dance floor. It adds to the feeling of presence.

The feature is encoded on the main 4K UHD disc. The accompanying Blu-ray carries extras only, no Blu-ray copy of the feature. Most of the extras are on the Blu-ray only, except for the commentaries, which are only on the 4K disc. 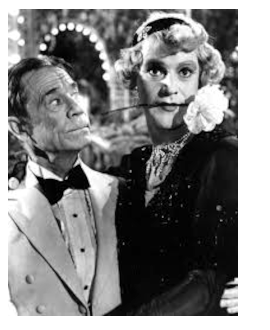 The older commentary is hosted by I.A.L. Diamond’s son Paul Diamond and screenwriters Lowell Ganz & Babaloo Mandel, with interspersed audio bites from Tony Curtis and Jack Lemmon. Billy Wilder biographer Joseph McBride weighs in with a new commentary that allows him to dispense an unending flow of production and bio information, while interpreting Wilder’s approach to this wild premise and comedy in general. He also recounts numerous old anecdotes and witty sayings attributed to Wilder.

The video extras on the Blu-ray disc hail from 2011 and even earlier. An excellent pair of German-language interviews with director Volker Schlöndorff’s were filmed at Wilder’s Beverly Hills office. Not so pleasant is a ‘Virtual Hall of Memories’ that consists of scenes, bites and photos viewed as a low-res animated art gallery.

My favorite MGM-generated extra gathers four of the ‘Sweet Sues’ for a chat. It’s a lightweight 12 minutes with the really charming (and still very pretty) ladies: Marian Collier (clarinet), Laurie Mitchell (trumpet), Sandra Warner and Joan Nicholas (saxophone). They’re unfortunately directed to mostly talk about Marilyn and the stars, not about themselves. It’s not like they say anything deep — we enjoy seeing them get all the camera attention. Sandra Warner says that Marilyn Monroe wasn’t available for SLIH’s pub photo shoots, so the photographers posed her body with Curtis and Lemmon, and pasted in Monroe’s head later.

The one reason I can think of for retaining the 2011 MGM-Fox release (besides having a standard Blu-ray copy) is that release’s additional audio tracks — it carries dub tracks in both French and Spanish language, with subtitles.