The Little Song ‘n’ Dance Show that Could, this over-achieving Jack Cummings production is a bright exception to the dull waning days of the MGM musical, due to many factors but especially Michael Kidd’s athletic choreography. And it’s been restored in both of its simultaneously-filmed versions, flat-widescreen and CinemaScope. 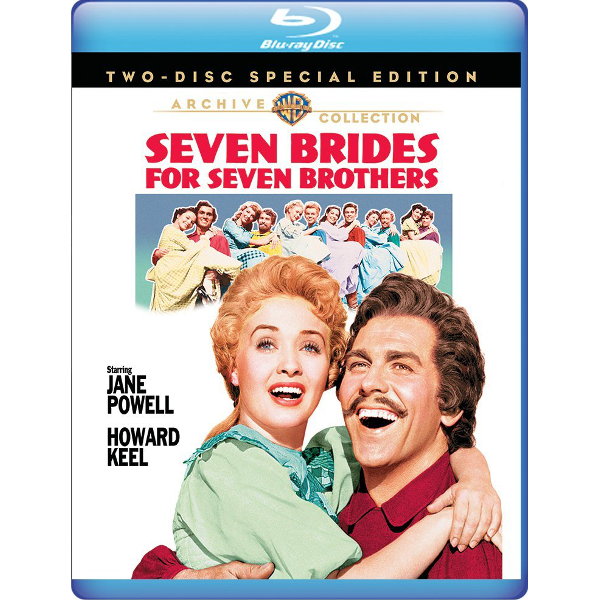 I was just listening to NPR, where some actors were discussing the way the new women’s rights movement is changing the theater. Somebody expressed the idea that all those sexist old plays and operas need to be updated to empower the women characters. By that yardstick 80% of older movies would be condemned to PC purgatory. This delightful musical, a film original, was conceived as a satire of classic literature, but its jokes are attuned to 1953, not 2018. I can already hear the enlightened backlash — its women are mostly ninnies that *want* to be carried off by rapacious men.

The poor cousin of 1954’s Brigadoon, Seven Brides for Seven Brothers was given a third of the budget but is twice the movie even without top talent like Gene Kelly. Filmed in the great indoors of MGM, the bright and witty jaunt still manages an outdoorsy feel, thanks mainly to Johnny Mercer and Gene de Paul’s lusty score and peppy dance numbers, including action scenes choreographed just like dancing moves. Jane Powell and Howard Keel make an attractive couple, the brides and grooms are an engaging group of studio up-and-comers, and the entire enterprise is so spirited that one wouldn’t guess that the MGM musical era was grinding to a halt.

Warners packs this two- Blu-ray set with not one but two versions of the picture. The extra copy is a rarely screened separate shoot version (see below).

It’s 1850 in the relative wilds of Oregon, where marriageable women are scarce, yet still treated like chattel. Farmer Adam Pontipee (Howard Keel) picks a prospective bride the way he might shop for a frying pan: he courts and weds town cook Milly (Jane Powell) in only a matter of minutes, neglecting to tell her that he has six uncouth brothers she’ll be expected to care for as well. Milly schools the near-feral louts in the finer arts of courting women, only to have them all turn lovesick for town girls out of their reach. From Milly’s copy of Plutarch, Adam gets the idea of kidnapping six brides for his six brothers … and the trouble begins.

The original songs for Seven Brides for Seven Brothers score much higher than MGM’s average — they’re consistently witty, well motivated and in the service of an interesting story, something few musicals can claim. The cast breaks out in a ballad of one kind or another every few minutes, yet even musico-phobes enjoy this one. The plot hook recounts The Rape of the Sabine Women in a rough West painfully short on prospective housework slaves eager wives. Adam’s six girl-hungry hick brothers don’t realize that kidnapping sweethearts is not the way to win a mate.

It’s a farce, of course, but one with a human edge. Jane Powell’s character Milly is already an overworked drudge. She’s sick of cooking for a lot of strange men, but Howard Keel essentially tricks her into becoming the new Snow White nanny for seven irresponsible dwarves bachelors up in them thar hills. There’s a certain desperation to Milly’s establishing a reasonable facsimile of civilization; the womenfolk must teach their men the rules of decent living from the ground up. What I’m wondering is, it seems as if these gorgeous and desirable females hold all the cards; they ought to be able to dictate the terms of any fraternization between the sexes, married or otherwise. I’m surprised that their fathers don’t demand an exorbitant dowry. And where are the mothers? They’d surely see the daughter-poaching Pontipees strung up by sundown.

Even though the proceedings are made hayride-chaste and squeaky clean for the uptight 1950s (the censors flipped over innocent lyrics about men sleeping with sheep), the whole enterprise has the fun appeal of girls and boys bundled together in a snowdrift-covered cabin. Once again the Powell character must act as a chaperone while the two sexes play teasing games.

Michael Kidd’s choreography uses extended takes and timed routines to excellent effect, and pulls off an acrobatic tour-de-force for the celebrated barn raising number. As many as ten dancers at a time risk their necks tumbling and cavorting atop raised planks, platforms, etc. The choreography is both exhilarating and funny, a combination of dance and acrobatic stunts guaranteed to win over insecure male viewers normally made uncomfortable by ‘prissy’ dance musicals.

Screenwriters Albert Hackett and Frances Goodrich are now best known for cooking up It’s a Wonderful Life for Frank Capra. They and the other writers keep everything in balance and in good taste. Most of the unlikely events squeak by (not a single girl really minds being kidnapped) and the story nimbly sidesteps an ending that seems headed for Hang Them Seven Brothers High. As the thick-skulled Howard Keel character learns a few valuable lessons about women, it all seems to have emotional depth.

The cast mixes non-dancing actors with pros from movies and the stage. The talented Tommy Rall contributed mightily to Kiss Me Kate, Good News, My Sister Eileen and even Funny Girl, yet is not a well-known name. Jeff Richards was reportedly not trained as a dancer, but certainly holds his own athletically; he began as a baseball player. Ruta Kilmonis would later be better known as Ruta Lee. Then an accomplished tumbler, Russ Tamblyn was just beginning to develop the musical skills he’d use only a few times, in West Side Story and two George Pal adventures. And there’s always the to-die-for Julie Newmar, at least four inches taller than her girlfriends but already the feline beauty that would become the definitive Catwoman on TV’s Batman.

The Warner Archive Collection Two- disc Blu-ray of Seven Brides for Seven Brothers contains two different versions of the picture on separate discs. Both look very good. The main motivation for an upgrade will of course be the added detail of HD — in all those wide shots and dancing master angles, we can finally read facial expressions and better identify which actor is which.

I approve mightily of the new transfers. The traditional ‘scope version begins with some colors in the title sequence that seem far too bright, but that tames down almost immediately. The way the color palette is used to blend the foreground sets with MGM’s cycloramic backgrounds is impressive, and seems less intrusive than in Brigadoon. Ansco color had a different, softer range of hues that have been tweaked here in a way that minimizes the contrast with what Eastmancolor would have looked like. (The best and most accurate Ansco color I’ve seen is on the German multi-film Sissi epic.) And again, the higher resolution helps mightily with the preponderance of wide shots. If any of the film’s close-ups had the CinemaScope mumps, Warners would seem to have corrected for them.

The flat version is not a perfect match with the ‘scope version, and at first glance looks a little grainy only because a direct comparison is now at hand. It was reportedly filmed at the same time but was reportedly never really used, which is a shame because old pan-scanned TV prints were terrible. Likely hard-matted to 1:66 or 1:75, the flat version fills wide TV screens at a reported AR of 1:77. Many shots were re-composed for the narrower format, especially dialogue scenes that no longer needed to fill a wider expanse of the frame. Viewers seeing this flat version for the first time may prefer it because the dancing figures in the big musical numbers will be bigger on one’s monitor. It’s as if we’ve been moved ten rows forward in the theater seating.

My old article from the first year of ‘MGM Video Savant’ in 1998 addressed the two versions question, back when it was obscure information. It contains a memo from George Feltenstein with the exact specs of the second ‘flat’ version of Seven Brides.

WB repeats the DVD extras, bumping some of them up to HD. A lengthy TV docu on the making of the film has a number of very good interviews from the Turner archives. A pair of newsreels appear to actually be newsreel outtakes. The premiere just shows some Central Park horse carriages delivering people to the Radio City Music Hall; who is that gaunt fellow that keeps getting close-ups? Two groups of actors then working on the MGM lot are enlisted to enter and cut a cake for an MGM 30th Jubilee celebration. Accompanied by Dore Schary, they work up impressive smiles and expressions of delight . . . and these are raw outtakes. The frequently-seen MGM Jubilee Orchestra short subject is a CinemaScope concert of MGM hit music conducted by Johnny Green, now remastered in HD. The opening shots panning across the MGM lot will be educational for those interested in what severe CinemScope distortion looks like — the camera pans left, and the picture shrinks and stretches in waves.

The main feature repeats a fine commentary by director Stanley Donen, who expresses his own satisfaction and surprise at the success of Seven Brides for Seven Brothers — it’s hard to believe that anybody in 1954 thought it ‘just another musical.’ It’s clearly superior to Rose Marie, Athena (aka Seven Sisters for Wheat Germ) and Deep in My Heart.

Remember how corny were so many of the ‘get married and have kids’ crowd-pleasers of the 1950s, exemplified by the song ‘Love and Marriage? This picture makes us feel nostalgic for that so-called ‘uncomplicated’ era.