The gaudy MGM musical bio gets one last go-round, gathering an all-star cast to illustrate the songbook of composer Sigmund Romberg. Gene Kelly dances with his brother Fred, and Cyd Charisse does a hot number with James Mitchell, while star José Ferrer goes on stage to perform with his wife Rosemary Clooney. 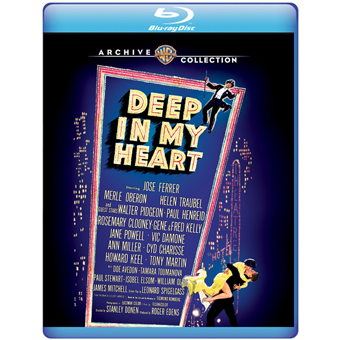 The first thing we see is a placard reading, “To all those who love the music of Sigmund Romberg…”  The composer is no longer a household name, and even in 1954, he was for most people not much more than a name on old sheet music. But, hey, the man wrote sweet melodies. In 1954 the once mighty MGM studio was downsizing from a self-contained film factory to an outsized rental lot, and finding that production values are more expensive when purchased a la carte. Those big musicals were being made two a year instead of one a month. To avoid a distant location in Scotland, Metro filmed the musical fantasy Brigadoon on giant interior sets, in pallid Ansco Color. Subjects were chosen with the idea of finishing up contract obligations. The same goes for the music — even the marvelous Singin’ in the Rain got the go-ahead because it could recycle 1920s music already owned by the studio. 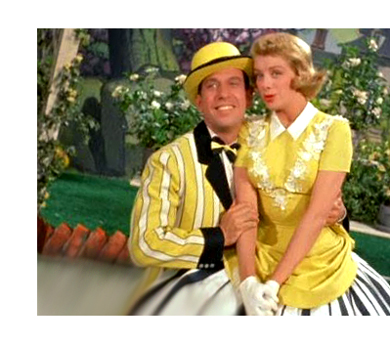 Deep in My Heart resuscitates an MGM format from the previous decade, the musical biography. Big singing and dancing talent could shine in fancy musical numbers taken from the songbook of a famed composer. The framing story is usually a fabricated fairy tale about ambitious young songwriters finding success, love and / or heartbreak. Naturally, the music is everything. The songs are treated as if they’re curing cancer, or allow mortals into paradise. We’re not talking Amadeus, but the life and times of Broadway greats: Words and Music (Mickey Rooney as Lorenz Hart, Tom Drake as Richard Rodgers), Till the Clouds Roll By (Robert Walker as Jerome Kern). Deep in My Heart pays more attention to the framing story than those earlier efforts, but the appeal is still very dated. The 1950s was in the midst of a cultural revolution, yet MGM kept churning out remakes of operettas like The Student Prince and Rose Marie.

We follow young Austrian composer Sigmund Romberg (José Ferrer) on his happy rise from success to success in New York, starting with impresario J.J. Shubert (Walter Pigeon). At first refusing to do sappy pop tunes for producer Bert Townsend (Paul Stewart), ‘Romy’ allows his friend, restaurateur Anna Mueller (Helen Traubel) and the classy star Dorothy Donnelly (Merle Oberon) to convince him to first become a popular success before insisting on his more traditional romantic ballad-based material, like Maytime. Romy goes broke trying to produce his own show, and returns to Townsend and musical writers Ben Judson (Jim Backus) and Harold Butterfield (Douglas Fowley). He meets the woman of his dreams Lilian Harris (Doe Avedon) while working at a mountain resort, but the problem of his ‘vulgar’ profession delays their marriage for years. He eventually composes the songs for Dorothy Donnelly’s The Student Prince. 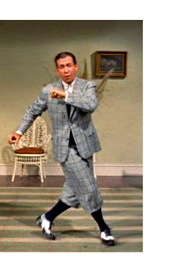 Like most of these ersatz bios, the appeal is in the musical numbers, not the framing story. José Ferrer was possibly eager to show off his full talents. He sings a bit but also dances, and delivers a fast-talking, athletic story pitch scene that ends with him jumping out of a window. His Romberg is likeable, sensitive and altogether too good for the part. Ferrer’s charm doesn’t come across in his soft-shoe performance, even when he’s doing everything very well technically. But he’s a trouper — it’s fun watching him try to elevate the show.

Star singer Helen Traubel brings her operatic voice to all the faux-impromptu musical bits, where Romy sits at a piano and they end up dancing together, that sort of thing. Sort of a grand Viennese mother figure, Traubel eventually sings “Stout Hearted Men” which is something of an ordeal. But she’s used to good effect in the obligatory Carnegie Hall finale. In musical bios, Carnegie Hall is the equivalent of the sacred Elephant Burial Ground. Old composers and songwriters pause there on their way to their heavenly musical reward.

The movie’s ‘lessons’ are a hoot. Romy achieves success by basically selling out to the established bosses, something that Louis B. Mayer would have approved of 100%. When Romy tries to ‘go independent,’ as did many movie stars in the 1950s, he flops. Romy gets his girl when she just gives up and decides that she’ll never escape his music; her only other romantic choice is the goony Robert Easton. Top model and genuine beauty Doe Avedon mostly looks unhappy. When Romy is getting old and his shows aren’t doing well, we meet a pair of young Bebop fans, who just don’t get his corny music. They call it opera. Neither gets billing — the boy is Russ Tamblyn, who looks eager to do backflips; the cute girl is Susan Luckey, who would make her mark acting and dancing as Billy Bigelow’s daughter in the upcoming Carousel. The message is that young upstarts just don’t appreciate the previous generation’s pop music and prefer trash. Romberg’s tunes are presumed superior to even earlier forms of ‘garbage music.’ A jazz novelty melody is lampooned in a jargon-packed song called “Jazza-Doo”, with a ‘Leg of Mutton’ dance. 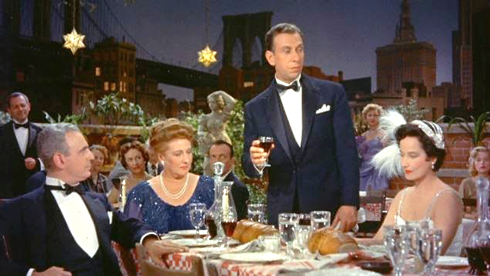 But we all come to these pictures to check out the talent. Stories circulate as to why some stars are involved and some aren’t, and the only one I know is that Helen Traubel’s role was planned for Jeanette MacDonald. Some of the choices seem to be calling in favors, as when Gene Kelly appears with his older brother Fred. With her bright face and inimitable voice, Rosemary Clooney is more than welcome. She sings and dances with Ferrer, her husband. By contrast, steely Tamara Toumanova (The Private Life of Sherlock Homes) must perform the ‘bad’ near-burlesque version of Romy’s song “Softly, as in a Morning Sunrise.” Ann Miller’s song and dance number “It”  is little more than ‘cute.’ It is now mainly noted for recycling colorful dance costumes seen in Singin’ in the Rain, not just a dress here and there but highly identifiable costumes from throughout the movie. What is pretty distracting now, might not have been a problem in 1954. What does that say about MGM, that they’re spending millions for a movie, yet must save money this way?

Vic Damone and Jane Powell are okay in a scene from Maytime, and Howard Keel barks his way through a patriotic tune from My Maryland, about the North reconciling with the South. Baloney, the rift is worse now, 150 years later. Young opera tenor William Olvis, a relative beginner, sings “Serenade” from The Student Prince. The biggest cheat in the film is a scene from The New Moon. Brilliant singer Joan Weldon is paired with Tony Martin, but her half of the number has been cut out. Weldon instead found herself playing blah non-singing roles in genre pictures, mostly at Warners. She can’t be expected to be excited about her excellent performance in the same year’s Them!  Warner Home Video makes amends in its extras, where Weldon’s polished solo can at least be heard in its entirety. 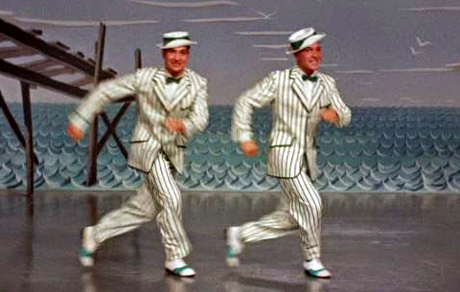 Deep in My Heart is still an accomplishment, probably filmed under less than optimal conditions. Producer Roger Edens had associate-produced many of the biggest MGM musical hits, but the musical assignments dried up just as he got the top slot… or, did he get the top slot because bosses like Pasternak and Freed weren’t willing to take a pay cut? Some of the patchwork casting must have depended on who owed the studio a movie or two. The next year’s Meet Me in Las Vegas might have been called “Meet Me at the Paymaster’s Window.” But the parade has passed this musical sub-genre by. When José Ferrar and Doe Avedon, their hair suitably grayed, receive applause at Carnegie Hall while resting on the conductor’s platform, they seem to be thinking, ‘Why is everybody down the street watching On the Waterfront? 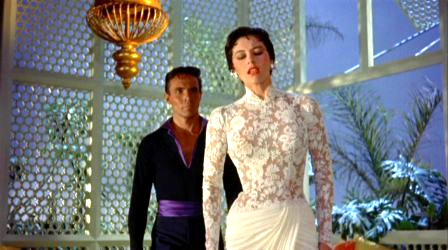 The Warner Archive Collection Blu-ray of Deep in My Heart may confuse film fans expecting more widely coveted titles for HD release, but musical followers will be pleased by the handsomely remastered presentation of this Christmas picture for 1954. The show is presented at its 1:85 widescreen proportions, and looks great. It’s early Eastmancolor printed in Technicolor. Cameraman George Folsey presumably poured on the light to give the end result a 3-strip appearance. The audio has been remastered in 5.0, another draw for musical fans.

Warners carries over the extras from the older DVD, but doesn’t upgrade them to HD. We get a “Strauss Fantasy” musical short with the MGM orchestra, and the Tex Avery cartoon Farm of Tomorrow. The disc producers have revived some deleted, unfinished musical numbers. Via an outtake or two synchronized to the music, Helen Traubel sings “Dance My Darlings” in the restaurant balcony set. “Girlies of the Cabaret” is an awful parade of showgirls in ugly ‘international’ costumes tackier than those seen in The Night They Raided Minsky’s. George Murphy sings and Esther Williams is the final “USA” girl, mercifully not shown in close-up. If I’m not mistaken Ms. Williams may have been one of the last MGM stars still on contract. The Joan Weldon- Tony Martin scene, with Weldon’s missing number “One Kiss” is included as an audio-only track. In the movie proper she’s seen only in long shot, supporting the very end of Martin’s solo.