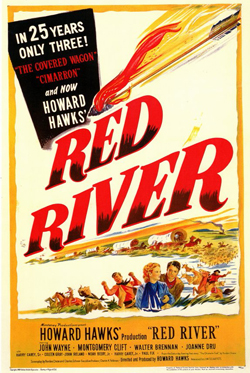 Howard Hawks’ first western was a huge hit and marked what John Wayne had feared might turn out to be his swan song, at the age of 41. He later said John Ford “never respected me as an actor until I made Red River.” During the shoot Wayne came to appreciate the talents of debuting co-star Montgomery Clift after initial skepticism. Despite its popularity, Clift disliked his own performance. John Ireland’s part was reduced in editing due to his interest in co-star and Hawks protege Joanne Dru, who he later married. Oddly, Hawks had sought Cary Grant (!) for the same role. Final film appearance of veteran western star Harry Carey.