Or, “Never on Sunday with Your Stepson.”   Director Jules Dassin’s monument to his beloved Melina Mercouri transposes a Greek tragedy to a modern setting. The pampered wife of a shipping magnate is like a queen of old — she can fling a priceless gem into the Thames on just a whim, and she goes in whatever direction her heart takes her. When her attractive stepson Anthony Perkins enters the picture, there will be Hell to Pay. 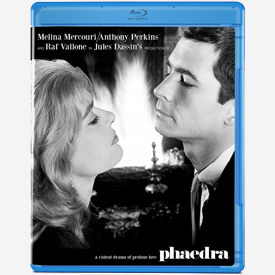 Anyone into amour fou, the romantic notion of a love without limits, beyond the harsh constraints of reality?  ‘What’s that Greek song about?’  asks young Anthony Perkins. Melina Mercouri gives him an immediate answer: ‘It is like all Greek songs, it is about Love and Death.’  Played out to the equally delirious music of Mikis Theodorakis, this show emphasizes crazy love and fateful death, adding a kind of suicidal glamour. 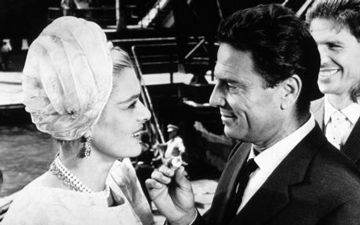 Expatriate American director Jules Dassin and Greek beauty Melina Mercouri became quite a power couple in European filmmaking. Their third collaboration Never on Sunday was a monster international hit, that helped burst America’s cultural barrier against the overt on-screen representation of prostitution. Already in her forties, Ms. Mercouri communicated a passionate intensity impossible to ignore. Photos of the actress sometimes make her look overly harsh. Her face is somewhat like Lizabeth Scott’s, with more exaggerated features. With her gravely voice, Mercouri makes a unique impression: exuberant, lusty.

Rather than do a sequel to Never on Sunday, Dassin and Mercouri went full-on Greek with their next film, the relatively lavish Phaedra. Writer Margarita Lymberaki helped Dassin transpose a play by Euripides to the then-trendy jet set. The original myth involves Phaedra’s husband Theseus, his previous wife Hyppolyta and her son Hyppolytus. It involves rejected women, angry gods, dynasty-destroying infidelities, false charges of rape and a vengeance aided by magic given Theseus by Poseidon. In one version Hyppolytus’ horses are frightened by Poseidon’s sea monster, and he ends up dragged to his death.

In Dassin’s transposed Greek tragedy, the Greek horses have become an English Aston-Martin DB4. The modern mythological figures are a vastly wealthy Greek shipping magnate, his aggressive and competitive sons and their spouses. Powerful Thanos (Raf Vallone) is too busy with his international deals to spend time with his wife, the impulsive, elemental Phaedra (Mercouri). He instead sends her to London, to convince his son by an earlier marriage, Alexis (Anthony Perkins), to give up his ‘foolish’ interest in painting and return to learn the shipping business. The younger man / slightly older woman chemistry is evident from the start.

In Dassin and Lymberaki’s version Phaedra’s mission is successful. She convinces Alexis to abandon his paints and return to the family compound on the island of Hydra by promising that Thanos will buy him the sports car of his dreams. But she has already acknowledged her sexual interest in Alexis through a typically irrational, unexpected act — throwing a priceless ring, just given to her by Thanos, into the Thames. It’s more than obvious that Phaedra is openly tempting disaster. When left own their own in Paris, the inevitable happens. 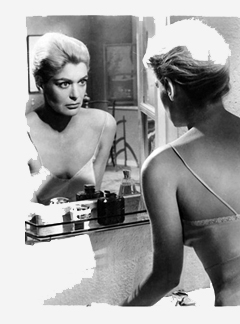 Back on Hydra, Alexis receives his dream car. Thanos tries to arrange a marriage to his brother’s daughter (hopefully not a blood cousin), Ercy (Elisabeth Ercy). The teenaged girl becomes furious when Alexis plays the field at a party, apparently sleeping with a pickup on a boat. But that’s nothing compared to the fury unleashed when Phaedra merely sees Alexis with another woman. Now acting from pure instinct, Phaedra refuses to let their affair end. She risks everything by kissing her stepson in the family compound. Only Phaedra’s maid, who has predicted this calamity, witnesses the kiss. Phaedra chooses the worst possible moment to confront Thanos with the truth of what is going on. Thanos’ giant merchant ship the Phaedra has just been lost at sea, taking many local sailors down with it.

With her unrestrained ‘female instincts,’ Mercouri’s Phaedra is wholly believable as a modern interpretation of a Greek myth. Raf Vallone’s Thanos is consistently energetic and hearty pursuing his shipping empire, but Phaedra won’t abide being a man’s secondary concern. He has no appreciation of her frivolous attitude toward his gifts, or her capacity for emotional destruction. When happy Phaedra can throw away a fortune, and when distressed she’ll put both herself and Alexis on the road to oblivion. At a certain point her rehearsal for doom becomes the real thing. It’s not Vallone’s fault that his Thanos has few surprises to offer, and the film at times does seem too predictable.

Anthony Perkins is excellent as the budding artist trying to avoid the life proscribed for him. Only once does a ‘Norman Bates’ gesture pop up, when Alexis raises his hand, palm outstretched, to make a point. The film was made when Perkins was hoping to establish himself as a romantic star in Europe; he also made two films with director Anatole Litvak, Goodbye Again with Ingrid Bergman and Five Miles to Midnight with Sophia Loren. Perkins’ career would from this point forward be a series of character parts and leads in good movies that weren’t seen enough, such as 1968’s excellent Pretty Poison with Tuesday Weld. 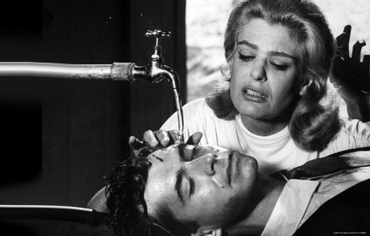 Depending on one’s individual taste, the big sex scene in Phaedra is either wildly overdone or gloriously hyperbolic. Alexis’ and Phaedra’s lovemaking in the shuttered Paris apartment becomes an elaborate series of soft-focus images. First his angle goes gauzy, then hers, then a shot of the fireplace. Filming through windowpanes flowing with rainwater, in the direction of a blazing hearth suspends the lovers literally between fire and water. Although Mercouri and Perkins don’t generate a powerful sexual charge together, Mercouri’s intensity fills the gap. And with Mikis Theodorakis’ rhapsodic theme music blasting away, Dassin could have filmed two entangled stick people and achieved a workable tone of ‘classic doomed love.’ Composer Theodorakis’ contribution is probably Phaedra’s strongest asset — the images and music harmonize well.

That’s one interpretation. It may also be that Theodorakis’ deliberate, almost somber music enforces a funereal pace on Phaedra, slowing down the tempo and drawing things out. If you’re into the specific intensity of Ms. Mercouri, that will not be a problem. Other viewers may just see a woman too old for the role, and dismiss the movie on that count. 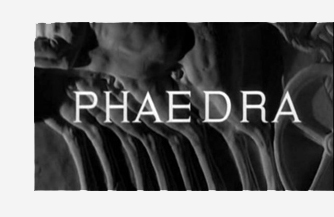 The fact is that Melina Mercouri looks great — if extreme — in her very special brand of sexual attraction. Often praised as the most influential Greek woman of her time, she championed national pride and culture and was a serious politician during a tumultuous period. One of Mercouri’s great ambitions, never fulfilled, was for Greece to recover the fabled Elgin Marbles. In the first decade of the 1800s a British Ambassador to the Ottoman Empire appropriated (looted?) a large quantity of marble sculptures that were originally part of the Parthenon.  Phaedra first sees Alexis when he is sketching the astounding 247-foot marble artwork in the British Museum. Sections of the Elgin Marbles also provide a background for the film’s main titles. (image right → )

Phaedra was reportedly a hit in European but did little business in America, where Anthony Perkins’s association with Psycho may have influenced the audience against his acceptance as a romantic leading man. But other factors are equally likely. The movie lacks the comedy of Never on Sunday, and the only humor to be had occurs when Perkins’ Alexis hams up his erotic auto showroom encounter with his ‘new love,’ that Aston Martin sports coupe. It’s the same car soon to be immortalized in Goldfinger. Even then, Mercouri’s unrestrained laughter is almost grotesque — she’s a force of nature, almost incapable of moderated reactions.

Olive Films’ Blu-ray of Phaedra is an improvement on the MGM Limited Edition Collection DVD from 2011. The difference comes across in Blu-ray’s resolving power. The hazy, filtered lovemaking scene that looked like mush on DVD now comes across as a deliberate effect. Some of the interiors have that European low-contrast look, so the increased contrast range makes many scenes look more attractive. I’ve been watching Phaedra from time to time on the MGMHD movie channel. On a 4K monitor, the Blu-ray also betters that slightly compressed image.

Now that the images no longer look dull, Mercouri’s designer outfits finally seem like the high fashions that Jackie Onassis might wear. When Phaedra changes to a robe or a nightgown, we’re more aware of the textures of the fabric. The streets of London and Paris, and the sun-swept island of Hydra are well represented. Dassin makes a powerful scene of Alexis’ frantic and reckless driving. Even in B&W we can tell that the Aston-Martin is gunmetal silver- gray. Excellent makeup shows Alexis’ face shredded from a beating by his father.

It’s also good that they finally got the soundtrack right. The Theodorakis music is a vital part of the movie, and it helps when it doesn’t sound clogged up or thin, as was the case on old TV prints. The only unimproved aspect of the show is the title sequence. It might be a dupe section or an optical, or it may have looked slightly weak and unsteady even when the movie was new.

The one extra is an English language trailer. Back in the 1960s trailers were still a movie’s most important publicity tool, and this one simply isn’t very good. It’s four minutes long, with a boring narration that tells too much of what’s going on. I think Jules Dassin narrates it himself. The promotional materials for his next Mercouri extravaganza, Topkapi are much better.