Did Republic’s serial-makers lose their marbles? This is an endurance test of a thriller, with 12 chapters that refuse to advance a story beyond the same repetitive ambushes and fistfights. It’s got monsters in the form of giant crawfish bred to… well, bred for almost no reason at all. With Phyllis Coates and Myron Healey. I tell you, watching this feels like watching an endless loop. But hey, it’s quite handsomely filmed! 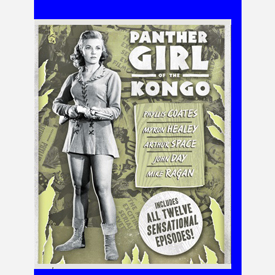 Ah yes. With my love of pulp movie marvels, a show called Panther Girl of the Kongo sounds like an invitation to fun of a high order. The movie is twelve chapters of jungle adventure, and its female Tarzan character is played by Phyllis Coates, the ‘Lois Lane with an attitude’ from the interesting first seasons of TV’s The Adventures of Superman. Going in, I had seen photos of a jungle set, some animals and a welcome rubber gorilla suit, elements that promised big-time nostalgic fun. After all, one of my first movie memories in a theater in 1957 included a Republic Serial. I had no idea what I was seeing and nobody explained it to me — a clanking metal robot walked down a hospital corridor and frightened a nurse. Movies had to be pretty exciting, if they could come up with incredible events like that. 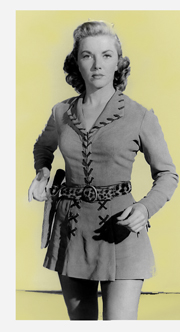 Olive has been releasing Republic Serials on Blu-ray for a couple of years now, in terrific quality — one that I reviewed is The Invisible Monster. Republic’s formula was a strange one, apparently designed to hold the attention of kids (small and big) for a fifteen-minute short subject. Each episode usually had a chase, a fistfight (or two) and an exciting cliffhanger that encouraged a return trip to see the next installment. In the years before Television, dedicated movie-going habits made such a format possible. Panther Girl is one of the last Republic serials, from 1955, when the whole idea was breathing its last gasp.

Ronald Davison and Franklin Adreon had done so much serial work between them, by 1955 their brains might have been fried. I have to think that they stared at each other across a desk and said, ‘the hell with it, let’s just make this an exercise in existential meaninglessness.’ I don’t know if it was really for budgetary reasons, but most of the things we enjoy about Republic serials are missing from Panther Girl of the Kongo. There are few or no stunts, no special sets or bizarre props, no wild villain in a silly costume and no special effects. The sole contribution of the famed Lydecker brothers appears to be the film’s ‘Claw Monsters’, which are nothing more than large crayfish photographed on miniature sets.

This synopsis is not going to be flattering. In darkest Africa, Jean Evans (Phyllis Coates) lives among the natives, some of which are friendlier than others. They call her ‘The Panther Woman.’ She’s doing some kind of philanthropic photographic work that involves taking pictures of wild animals. The entire twelve chapters are devoted to Jean trying to figure out a really difficult mystery, aided by her friend Larry Sanders (Myron Healey of Varan the Indigestible). These giant Claw Monsters are terrorizing the natives. Two ne’er-do-well white guys named Cass and Rand (John Day & Mike Ragan) skulk about pretending to be concerned about the Claw Monsters as well. But they’re really (gasp) slimy crooks that want to scare off the natives so they can work their illegal diamond mine without detection. And Cass and Rand are just flunkies for the rather dull and practical mad scientist Dr. Morgan (Arthur Space). He’s in charge of the mine, and has come up with a hormone serum that is lugged around in glass jugs, like moonshine. When fed to harmless little crawdads, it only takes a day for one to grow up to the size of a Volkswagen (air cooled) ! Will Jean and Larry figure out who is behind the Claw Monsters? 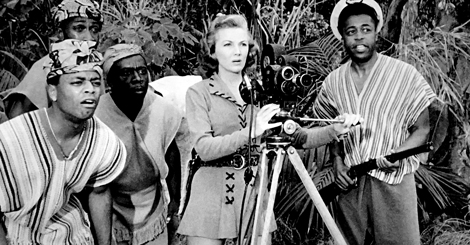 Actually, our heroes have everything they need to solve the riddle of the oversized crawdaddies by the middle of the second chapter. In a bizarre, mind-numbing exhibition of arrested narrative development, nothing advances for the next 2.5 hours. Cass and Rand fail time and again to ambush & murder Jean and Larry. Jean & Larry just can’t seem to hang on to the film of the Claw Monsters, evidence that will bring help. The feeling of narrative quicksand is almost as strong as in a Kafka story. Cass and Rand keep going back to Morgan, announcing that their cover is blown but they’ll try again for the umpteenth time. Although he should expect the Bongo Kongo army to visit at any moment, Morgan behaves as if the boys dented the fender on his car. The idea is to divert attention from their nefarious diamond mine, but everything they do encourages exactly the opposite.

Jean has no identity as The Panther Woman, besides wearing her light & breezy leather jungle dress. She swings through vines now and then, and rides on an elephant. Otherwise she’s just a slightly assertive lady who defers to Larry. She screams like an old-fashioned ninny when confronted by a lustful gorilla or the pincers of a Claw Monster. The one concession to heroine-hood is that she rescues Larry almost as often as he rescues her.

The awful thing about the plot is that nothing advances. Cass and Rand try to kill them, and Jean and Larry barely go on alert. They seem surprised when trouble arises again, as if everyone is suffering from short-term memory issues. See more than one chapter, and the repetitions immediately stack up. It’s as if the writer knew that serials are dead, that chapter 3 could be a carbon copy of chapter 4 and it wouldn’t matter.

There isn’t even an acceleration of jeopardy or tension when the conclusion arrives. The defeat of the villains doesn’t even excite the leading characters. Since they’ve have had nothing to say beyond blank exposition, no relationships or characters are formed. When it comes time for the fade-out, all they have to offer is vague small talk. They’re like toys waiting to be put back in the box. 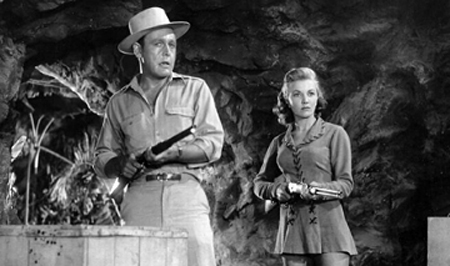 The other Republics I’ve seen had some of these problems too, but there were always compensations — the wonderfully goofy rocket ships and flying backpacks, crazy invisibility gimmicks that everyone should realize are entirely impractical. Although limited, the characters did have some coloration. Every once in a while somebody like William Schallert would come along to bring things to life for a minute.

Mad Dr. Morgan’s scheme is self-contradictory. Forget the diamond mine! That growth hormone serum he’s invented could make him a billionaire five times over. The whole show is a non-starter, story wise.

Even though Republic’s style was painfully inflexible, its production values were consistently better than average. The images are sharp and well lit and the sound editing is particularly good. But Panther Girl of the Kongo lacks the great content we expect from either an action or sci-fi serial from this company. The Claw Monsters are filmed without a great deal of imagination and never seem threatening. They’re hardly ever in the same shot as a human, and move too slowly to be scary. And that’s IT for thrills, unless seeing hundreds of rounds of ammo being shot, with nobody ever hit, makes sense. The cliffhangers involve no production effects or spectacular miniatures. Larry and Jean just extricate themselves from whatever problem they’re in — grabbed by a gorilla, about to be hit by a jeep — and the show goes on. 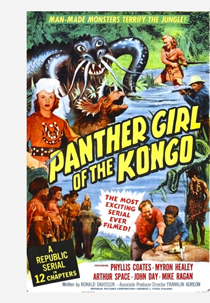 The chapters are as follows. One chapter confuses its title on the previous chapter’s cliffhanger; chapter 10 is a ‘seventh inning stretch’ that goes over a number of already repetitious highlights, for the benefit of a visiting Kongo official.

Phyllis Coates’ acting ability doesn’t get a showcase here, and the reliably dull Myron Healey is equally stiff. The show is strictly for the crowd that loves all and every Republic serial.

Jean is introduced with some nicely shot and edited vine-swinging stunts. That material and various animal scenes are reportedly recycled from a pre-war serial called Jungle Girl. Phyllis Coates wears the same costume as Frances Gifford in the older movie. Jungle Girl sounds like a pretty good show… it also has Tom Neal and Gerald Mohr. Although everybody’s capable, Panther Girl basically has nobody. My favorite among the Anglo cast is Mike Ragan, a guy with a face that says ‘human Beagle Boy.’ If Ragan were a fireman come to rescue me from a burning building, I’d wait for somebody else. Like, untrustworthy, see?

The black actors in the cast must do the usual thing of being scared of their own shadows all the time, yet they come off with dignity. Those with speaking parts were typically typecast at this time, but I see that Morris Buchanan and Roy Glenn later got some halfway decent roles, in the seventies and beyond. My favorite is still Archie Savage, a muscular guy with sharp reflexes, who plays one of Dr. Morgan’s native henchmen. A dancer and choreographer, Savage got some visibility in pictures like Vera Cruz and South Pacific. He also enjoyed a busy career abroad in the heyday of Cinecittá, acting and doing choreography for big pictures like Sodom and Gomorrah. Archie Savage is also the first black movie spaceman on this side of the Berlin Wall, in Antonio Margheriti’s Space Men aka Assignment Outer Space. 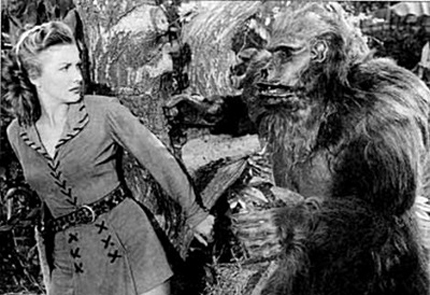 The Olive Films  Blu-ray of Panther Girl of the Kongo is a pristine encoding of this holdout serial from the waning days of Republic. The quality of the B&W image is consistently excellent, even getting fine results from stock footage already fourteen years old.

Olive’s presentation has English subs for the hard of hearing. The chapters can be accessed one at a time or played all at once, a handy feature for Homeland Security interrogation sessions. But perhaps I need to keep things in perspective. Panther Girl is a masterpiece of modern cinema next to the next ‘monster’ disc in the Savant review hopper, the South Korean-made 3-D opus A*P*E.

In 1966 Republic apparently released a stack of serials in TV cut-down versions, possibly in response to the TV success of Batman. This show became a feature only 100 minutes in length. The way the movie is, it could be reduced to almost any size and still seem repetitious.

Notice to Republic — let’s see some of your crazier pre-war stunt-oriented serials, or some of the others with wild, campy elements. I realize sadly that a few of the more likely candidates based on comic book characters, are probably ruled out over rights issues.