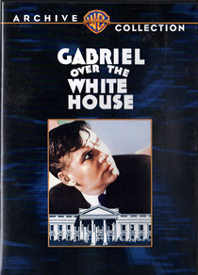 The unique political fantasy Gabriel Over the White House has become painfully topical lately. This is an update of a 2009 review. To my knowledge nothing has changed with the product — I saw a re-promotion of Twilight Time’s 1984 disc and thought, Gabriel is twice as relevant and at least as scary.

Unstable times in America have produced some pretty strange political-religious message pictures. The blacklist period of the late 1940s takes the prize for weirdness, with My Son John,  The Next Voice You Hear  and Red Planet Mars. Twenty years earlier the tense political changeover from Herbert Hoover to Franklin Delano Roosevelt inspired this jaw-dropper made by liberal Walter Wanger and conservative William Randolph Hearst during the ‘winter of despair’ — the months after F.D.R. was elected but before he was inaugurated in March of 1933. Horrified by Gabriel’s political content, MGM’s Louis B. Mayer delayed its release until Herbert Hoover left office, in a feeble attempt to avoid awkward associations.

That winter was said to be the darkest of the Great Depression. With no federal insurance for bank deposits the personal savings of many ordinary people were wiped out. With the collapse of the economy fears of revolution were being taken seriously. Thousands of WW1 veterans had marched on Washington to demand relief, only to be routed by the U.S. Army. Newspaper editorials predicted disaster. 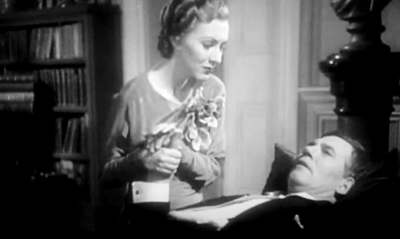 Taken from an obscure book Gabriel Over the White House is a fantasy incitement for the overthrow of the U.S. government by a ‘benevolent dictator.’ It recommends that America be ruled by a President deriving his power ‘directly from the people,’ the Fascist system already in place in Italy and just coming to power in Germany. Radical sentiments were common in 1932. Many Americans welcomed the notion of a strong man to come along and set things right. The film mixes its message with a religious fantasy, which also finds relevance in a present political climate that binds Fascism to faith.

Screenwriter Carey Wilson (Love Finds Andy Hardy, The Red Danube) sketches a United States in disarray. The newly elected President Judson Hammond (Walter Huston) is an irresponsible playboy. He ignores starving Americans and continues to conduct ‘business as usual’ as a gutless mouthpiece for his party pals. He avoids taking action on pressing issues, dodging his leadership role by categorizing both John Bronson, the populist leader of the ‘Army of the Unemployed’ (David Landau) and the notorious racketeer Nick Diamond (C. Henry Gordon) as ‘local problems.’ Judson’s cronies don’t care that the Presidential assistant Pendie Molloy (Karen Morley) is also bachelor Hammond’s lover. Both Pendie and first secretary “Beek” Beekman (Franchot Tone) are horrified when their boss, who insists on recklessly driving his official car, crashes while speeding at 98 mph. Things are looking bad, but then the President awakes from his coma transformed into  ‘a new man.’ No longer interested in personal pleasures, Hammond dedicates himself tirelessly to the nation’s ills. He acts to reenergize the economy by enlisting the unemployed into an official Army work corps for public projects. Amazed by the President’s fiery determination, Pendie and Beek worry that he may also be insane — he sometimes acts as if possessed. Hammond breaks with his party cronies and eventually dismisses his entire cabinet. When Congress threatens impeachment the President declares martial law, shuts down the legislature and assumes dictatorial authority. He then takes on the racketeers, who respond with terror attacks against his administration. Beekman is made head of a special military court that arrests and executes known gangsters like Nick Diamond. Hammond then turns to balancing the budget. His foreign policy is ‘America First’ all the way. With a show of military force, he threatens our European and Asian allies, telling them to pay their debts from WW1 — or else.

Sound familiar? Gabriel Over the White House is wildly provocative radical propaganda. The way it conflates religious faith and political will to produce an ultimately confusing fantasy is uniquely American. The Angel Gabriel possesses the near-dead President Hammond in a spiritual takeover represented by a plaintive trumpet, a gust of wind and a lighting change. The ‘reenergized’ President might be a re-animated corpse, a Lazarus-like zombie. As in a naïve religious play, God seizes the government to do what needs to be done. And as every dangerous zealot knows in his heart of hearts, There’s No Law Against What’s Right.

Gregory LaCava’s sharp direction draws a strong contrast between the before- and after- versions of Judson Hammond. The carefree party candidate makes jokes about his power, speeds in his limousine for a thrill and plays with his nephew while ignoring grave economic news on the radio. He can’t locate Siam on a map and doesn’t care. He brings his mistress right into the White House as his ‘personal assistant.’ His speeches offer vague promises of prosperity and meaningless slogans about America picking itself up by its bootstraps in the tradition of Valley Forge, etc.. 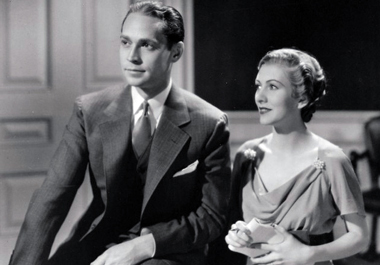 The post- accident President Hammond is a different man altogether. He demands kingly respect at all times and curtly dismisses his old cronies. Hammond shocks the world in his press conferences, dispensing bold and radical policy statements. Actor Mischa Auer (famous from LaCava’s screwball comedy My Man Godfrey) plays Mr. Thieson, a press corps reporter from a left-wing paper, perhaps one with communist sympathies. Hammond (1) ignored Thieson’s pleas for compassion for America’s starving poor, but Hammond (2) makes a stirring speech about the rights of common citizens, and tells the delighted Thieson that he wants to be quoted.

The show was originally conceived to warn against the ‘feared demagogue’ F.D.R. Although this is before Roosevelt’s New Deal got underway, Hammond/Gabriel’s public works program has similarities with the National Recovery Act. As it turned out Roosevelt refused to meet with the protesting veterans that marched on Washington. The film’s Labor Corps will house millions of men away from their families, in Army-like tent cities. Hammond defines democracy as a dictatorship in the name of the majority. His other acts are more similar to those of Adolf Hitler, especially his suspension of civil rights and his imposition of martial law by presidential fiat, with the claim that his actions merely fulfill the desires of the average citizen. Also like Hitler, Hammond suspends the law to arrest and execute ‘enemies of the people’ as he sees fit to define them. Nick Diamond is a swarthy foreigner and therefore not considered a real American with rights; immigrants are not welcome, and those already here are branded criminals. While handing down death sentences in his military star chamber, secretary Beekman uses his verdict statement to praise the leadership of the all-wise Hammond. The show trial resembles those designed to please a Stalin, a Hitler or a Chairman Mao. 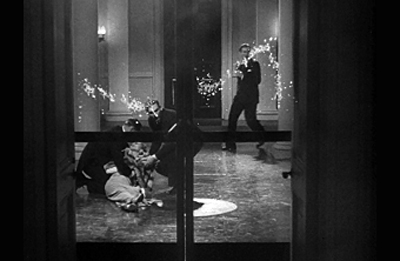 The film’s wilder scenes make our heads spin; until very recently they seemed fantastic nonsense. A gangland drive-by shooting at the White House leaves both a security guard and poor Pendie riddled with machine gun bullets. For a socko finish Hammond gathers the ambassadors of debtor countries for a demonstration of air power, Billy Mitchell- style. He first lectures the deadbeat foreigners for ignoring their war debts to America and building up their armies and navies so that America is forced to re-arm as well. It’s rather prophetic to see the Japanese ambassador watching Hammond’s dive-bombers blow up obsolete American battleships. Hammond then proceeds with a stirring description of future wars, which he predicts will be fought with invisible gases and death rays. The ambassadors are stunned into acquiescence.

Hammond’s self-serving credo preaches that America has to stop being a patsy nation, one pushed around by the rest of the world. He panders to that portion of the public eager to believe that America’s foreign aid is simple robbery. As in a right-wing power fantasy, Gabriel Over the White House does not consider the rights of other nations, which the authors think should be subservient to the United States on every political issue. 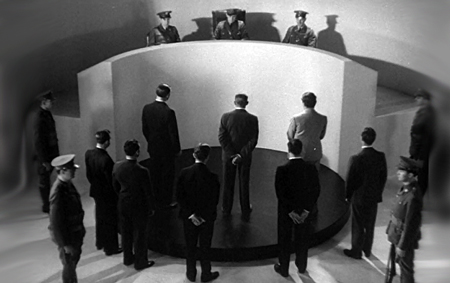 In his book Hollywood Censored Gregory D. Black reports that the original Gabriel Over the White House book took place at a remove from Depression politics, in the then-distant future of 1950. Co-producer William Randolph Hearst wanted the ‘inspired madman’ President Hammond to resemble F.D.R.. Even MGM and Louis B. Mayer found the shooting script “wildly reactionary and radical to the nth degree.” After seeing a preview cut the conservative Republican Mayer thought the initial image of President Hammond was indeed a scathing indictment of the do-nothing Herbert Hoover administration. Changes were ordered. Some speeches that sounded too much like Hoover’s ‘prosperity is just around the corner’ slogans were cut. Pendie was shown becoming engaged to Beek, to neutralize the presidential hanky-panky problem. The re-cut jettisoned the most radical part of President Hammond’s ultimatum to the assembled ambassadors. As originally filmed, Hammond’s threat was even more direct– unless the foreign nations pay up, he originally vowed to build an enormous air force and bomb them into submission.

Finally, the preview cut’s bizarre ending was eliminated altogether. (spoiler) After collapsing and reverting back to his original personality, Hammond repudiates what he’s done. He tells his party cronies that he’ll get things back to business as usual by canceling his foolish foreign treaties and recovery policies. But Hammond collapses before he can do anything official or speak to the public. Realizing that all of Hammond’s ‘good works’ are in jeopardy, Pendie purposely withholds the President’s medicine. He dies.

Gregory D. Black reports that it was censor Will Hays who wanted to play up the idea of divine intervention, to suggest that the President was not deranged, but inspired. Hays also had a scene removed in which the President and his cronies play poker in a smoky ‘back room.’ All of these retakes were done in great haste. According to author Black, the President’s war threat was the first piece to go — MGM did not want to antagonize its European distributors. 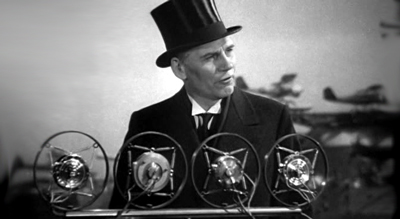 The review of the film in The Nation was entitled ‘Fascism over Hollywood.’  Most other reviews simply called the film unconvincing and naïve. Gabriel Over the White House drew little attention in release and soon became another forgotten political anomaly of Hollywood history. The only other film with a claim to a higher level of political-spiritual delirium is 1952’s Red Planet Mars. It proposes that God lives on Mars, plain and simple. God’s radio messages overthrow communism and bring us all a future of Christian joy.

This well made fantasy will perplex ordinary viewers while leaving political thinkers with their mouths hanging open. Walter Huston, Karen Morley and Franchot Tone are excellent. Were actor C. Henry Gordon fat-faced instead of lean, he’d be a dead ringer for Al Capone. The movie displays some fancy editing but is mostly content to film things straight on — especially Huston’s commanding oratory. The actor played many remarkable character parts beyond his better-known triumphs in The Devil and Daniel Webster and The Treasure of Sierra Madre.

The Warner Archive Collection’s DVD-R of Gabriel Over the White House is in great shape for both picture and sound. The main titles are a bit unsteady but from then on the picture is exemplary. No extras or trailer is included. Sweet dreams, and we’ll meet again on the barricades.