How can a ‘Z’ horror production so completely absorb the thoughts of this ex- film student?  This maladroit 1963 monster mash can’t even tell when it’s doing something good. A capable cast gives their all to a marginal production that, re-titled as The Atomic Brain, became a staple on late-nite TV, where it worked better than a sleeping pill. For extras, the quality disc presentation taps the one mortal willing to research this film’s murky depths: who else but Tom Weaver, whose original interview research actually makes sense of this screwy picture. Well, a little sense, at least. 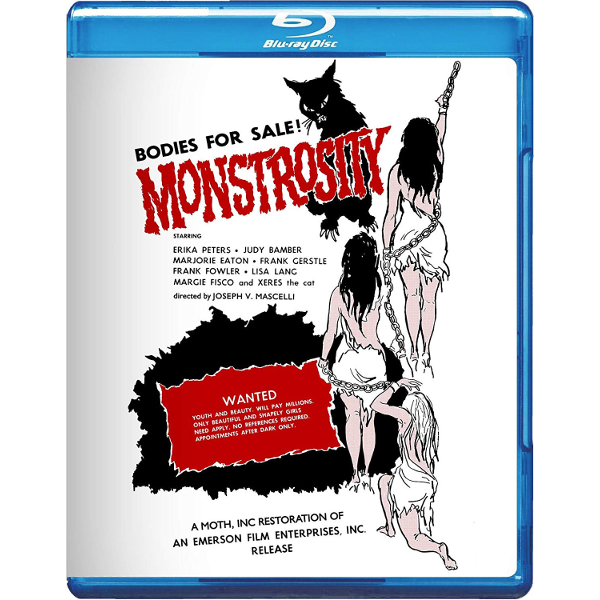 Yes, today on ‘Why Watch Theater’ we have the notorious Monstrosity, which before a 2003 Something Weird DVD I knew only as The Atomic Brain, a regular interloper on late-night TV broadcasts. The basic synopsis makes us expect the weirdest movie ever made. But we’re incurable optimists.

The things that happen in an old house somewhere in the Hollywood hills! Dotty old Hetty March (Marjorie Eaton) pays the bills of Dr. Otto Frank (Frank Gerstle) so he can run an atomic lab in her basement. He’s transplanting brains; Hetty hopes he’ll succeed so she can continue her life living in a young body … which she’s already picked out!  Nina Rhodes (Erika Peters), Bea Mullins (Judy Bamber) and Anita Gonzalez (Lisa Lang) arrive from Europe, and Hetty chooses Bea’s body as the one she’d most like to seduce with. But other issues could gum up the works. Hetty’s gigolo-lackey Victor (Frank Fowler) hangs around, letching after the three body-donors-in-residence. A couple of Dr. Frank’s first-try transplant mistakes wander about the estate, too. A werewolf-like creature is chained in the garden. This is the aimless mad doctor movie in which a cat’s brain has been transplanted into the head of a woman, who subsequently prowls around doing a laughable cat imitation, including eating a mouse. This is also one of those ‘narrated films’ with a superfluous, often confusing voiceover that comments on what we’re seeing. The unidentified narrator makes snide observations about the characters, to no coherent purpose. We soon realize that the filmmakers don’t understand what an audience expects of a horror film, and have no faith in what they’re doing. It’s as if they expect the film to direct itself.

Tom Weaver’s commentary confirms some of our guesses. Director Joe Mascelli is indeed the author of a well-known book on feature cinematography, despite having only a few credits on his résumé more competent than Monstrosity. But we had no idea that writer & co-producer Dean Dillman Jr. was the brother of the well-known actor Bradford Dillman. 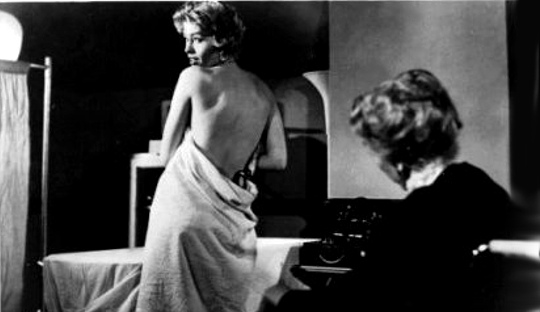 The disc restoration of Monstrosity is so good that we can appreciate its few good points while wincing at shots that are out-of focus. As Weaver remarks, the rank incompetence odd visual style here is even more blatant than that of an Ed Wood movie. The editor occasionally inter-cuts material shot at night, with material filmed in broad daylight. Viewers are instantly transported to the sanity-challenged 2 a.m. Z-movie zone … where nothing is real.

The actors are mostly professionals, which helps quite a bit. Established actress Marjorie Eaton is a cranky old sicko who delights in watching her young female guests try on clothing, so she may gaze upon the body she’ll have after the brain transplant. This goes on for reels, while the clumsy doctor fails to get consistent results from his (unseen) brain-swapping procedure. Why the three houseguests don’t freak out when they meet his previous patients is anybody’s guess — the cat-woman and the fanged thug tethered on a chain.  Gerstle’s instant atomic transplant recipe finishes in an atomic oven, which in the prologue reduces a girl to a smoking skeleton. Oops. I wouldn’t be surprised if most of the budget went into the film’s solid-looking atom furnace. Famed prop-fabricator Kenneth Strickfadden is credited with some of the sparkly-flashy electrical effects, but the nude women are ‘reenergized’ by being elevator-dunked into the atomic pile. It’s the trademarked Fukushima/Chernobyl process. Frank Gerstle is an easily recognized character actor and bit player with a huge number of film appearances on his dance card. I remember him well as the lab technician who tests Edmond O’Brien for ‘luminous poisoning’ in the frantic noir D.O.A.. Gerstle’s hard-edged ‘Sgt. Rock’ face is ideal for military men. Walt Disney chose him to command the first rocket to the moon in the landmark TV info-tainment special Man and the Moon.  His Dr. Frank putters about, discussing his completely irrational mad surgery plans. He complains every time Hetty drops in to see what’s cookin’ in the old cyclotron. At one point he appears to hold a brain in his hands, only it looks like two little animal brains.

The actors never give up. In the case of Erika Peters and Judy Bamber, the show got more help than it deserved — the actresses try to stay in the moment no matter how pitiful the scene. Although the producers would never consider sex scenes or nudity, the sleaze factor can be felt in their suggestive voiceover narration. A key film still ( ↓ ) appears to have been taken on the sly between film takes, to catch one of the actresses in a pose with more cleavage. Actors Frank Fowler and Marjorie Eaton are turning to go back to ‘position A,’ and the actress is caught putting her dress back on to roll the scene again. A crew member is on the left. Were the filmmakers too repressed to simply ask for some sexier poses? Weaver reports that the production folk admitted that they had no affinity for horror and just wanted something that would sell. The disjointed continuity suggests that nobody was in full charge — perhaps co-producer Jack Pollexfen shot the day-for-day inserts for night scenes, figuring that the lab would make them work somehow. Some of the mismatches remind us of groaners like Mesa of Lost Women: the show occasionally cuts to near-extraneous material, almost as if that’s what the editor found next in the trim bin, ready-to-go. Surrealists can get behind that kind of cinematic logic.

The amusing thing is that the excellent finishing job appoints the show with handsome, technically clean dissolves and fades. The editor TRIED to make it all look like a movie! 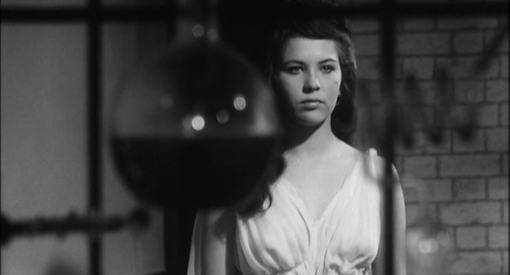 When in Doubt, Crib from the Best.

In terms of genre DNA, Monstrosity would seem to be yet another surgical horror opus inspired by Georges Franju’s Eyes Without a Face. The timing established by Tom Weaver fits, if the filmmakers saw Eyes in Europe or at a film festival — or even if they read a synopsis in a trade brochure. The similarities are certainly in evidence. Semi-prisoner females are used as guinea pigs and sacrificial victims to restore youth and beauty to another woman. One victim falls from a high window trying to escape. Another is chlorformed in a parlor. The earliest transplant victim, reduced to a serene zombie, for a while wanders around the house in a nightgown. She’s perhaps echoing Edith Scob’s haunting, poetic scenes in Eyes Without a Face, but Joe Mascelli’s imagery doesn’t even begin to approach that of George Franju. More mutilations follow before the final curtain rings down with a Z-movie thud. The sexiest of the three ladies loses her life trying to retrieve one of her eyes from a lab table.

Of the “Z” grade mad-surgery Franju imitators, only Joseph Green’s The Brain That Wouldn’t Die  dove into the sleaze-shock DNA pool and came up with something truly artistic, even if much of its cinematic appeal is accidental. Monstrosity is a clumsy footnote, one of those oddball independent productions that made its mark because content-hungry TV stations of the 1960s would run most ANY horror item.

If you’re a horror fan in love with counter-intuitive cultural cinematic weirdness, this show was made just for YOU. 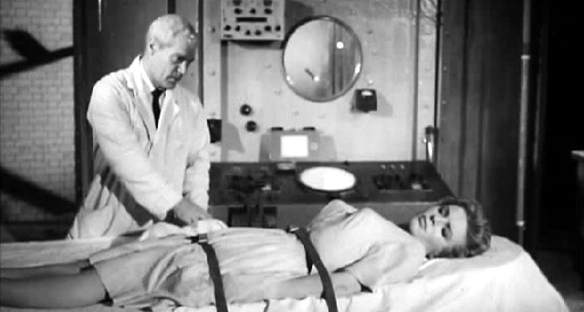 Moth Inc.’s Blu-ray of Monstrosity arrived on my doorstep out of the blue; I thought Tom Weaver sent it but he disabused me of that mistaken notion. Considering how quickly it got my attention, I guess that Moth Inc. sent it to the right reviewer.

The film is viewable in both 1:85 and 1:33, as it appeared woefully mis-framed on late night TV screenings. The fine transfer reproduces all the okay shots as well as the focus-challenged clunkers. A lot of the movie looks attractive, although it’s a big surprise when any two shots cut together smoothly. The audio has been restored as well. Some of Gene Kauer’s music fits, and other cues just take up space — the tracks have that ‘bargain stock library’ sound.  George Romero would later work miracles with a better choice of stock music cues in his Night of the Living Dead.

A new featurette called The Brothers Dillman gives us a choker close-up of the late Bradford Dillman explaining his affection for his brother Dean Dillman Jr., and his estimation of Monstrosity as hailing from near the bottom of the pit of abysmal movies. Daughter Pamela Dillman amplifies the good word for her uncle Dean and acknowledges the status of a horror picture that’s earned a humble footnote in film history.  Although Monstrosity is no The Brain that Wouldn’t Die, I find it a darn sight more fun to watch than ‘Manos’ the Hands of Fate or Eegah. 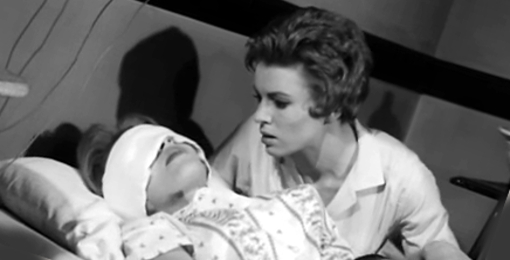 The disc cover uses the film’s minimal original ad art for the ’63 Emerson Film Enterprises release. A restoration promo reel and stills gallery are attached as well as the TV alternate that simply drops the theatrical title card ‘Monstrosity’ and slaps another on at the front. All the credits are at the end of the show.  Tacked on at the end are an absurd number of disc production credits. Who are those people, the entire high school graduating class of Moth Inc.’s CEO? (They’re donors to a Kickstarter campaign. Perhaps each was mailed a genuine Dr. Frank Dead Cat, in thanks.)

That brings us to yet another fan-friendly commentary by Tom Weaver, whose interview archive contains input from more than one of the makers of Monstrosity. Tom discovered that the house where Hetty is supposed to live, ‘somewhere in the rural hills of Hollywood,’  is really on West Adams street near downtown Los Angeles. We get first-hand memories of the actresses. Erika Peters is said to have had a thick foreign accent. Since Bradford Dillman couldn’t even remember the movie (it’s claimed that he recorded the narration), it’s likely that Tom Weaver is our only conduit to its production history. Tom compares production schedules to debunk the myth that a shot with a mutilated woman under a swinging light bulb fixture ‘inspired’ a visual in Hitchcock’s Psycho.

Dr. Robert J. Kiss’s distribution research is really welcome this time; we’re curious to know just how much of a theatrical life this opus enjoyed. We find out that it ran as a second feature to, who coulda guessed it, fave CineSavant sci-fi thriller The Creation of the Humanoids. What a twisted double bill that must have been.