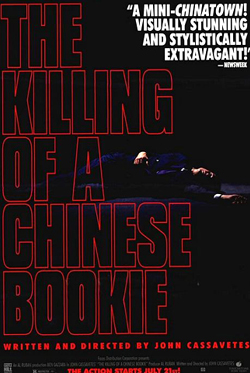 The Killing of a Chinese Bookie

Hitchcock had Jimmy Stewart, Kurosawa had Toshiro Mifune and John Cassavetes had Ben Gazarra. 1976’s The Killing of a Chinese Bookie, the second of three tempestuous collaborations between the determined director and his equally strong-willed star, is a fatalistic gangster movie with Gazzara’s beleaguered strip club entrepreneur run through an obstacle course of existential conflicts worthy of a Norman Mailer novel. The 135 minute film bombed in its initial release and in 1978 Cassavetes performed some elective surgery bringing the star-crossed movie down to 108 minutes (Criterion released both versions in their Cassavetes box set, “Five Films”).