He sings, he fixes cars, and he takes punches better than De Niro’s Raging Bull. Elvis Presley excels in one of his few ’60s pictures that shows an interest in being a ‘real movie.’ It’s a remake of a boxing saga with entertaining characters and fine direction from noir specialist Phil Karlson. Plus Charles Bronson, Lola Albright and Joan Blackman in standout roles. 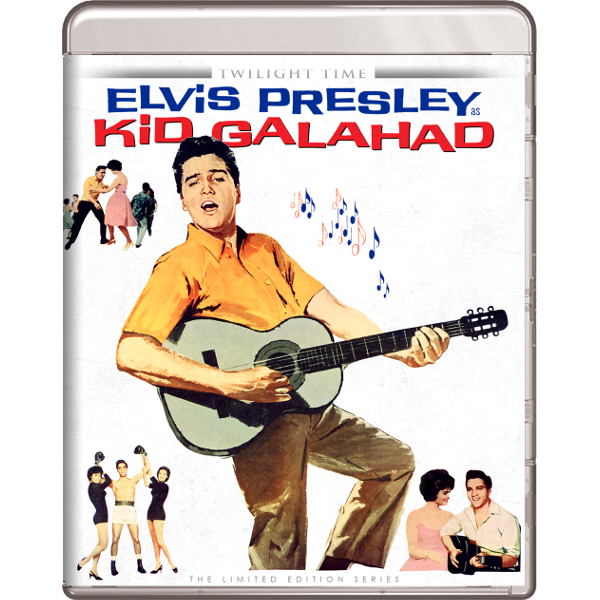 What, a good Elvis Presley picture? I’ve seen most of the obvious winners, but whenever an Elvis birthday marathon is in swing we find ourselves inundated by the films he seems to have slept through, or given up on, or put himself on Tom Parker autopilot for. When I was a little kid Elvis was an idol of cousins eight and nine years older than myself; I didn’t decide he was cool until we saw Blue Hawaii at the Hickam A.F.B. base theater and went nuts recognizing well-known nearby places on Oahu — Elvis’s ‘home’ was in the middle of an oft-visited tourist beach. At age ten or so I sat through Roustabout waiting to see Hercules in the Haunted World; from then on most Elvis pictures were things seen in small pieces on network TV. I stayed away until college and the rediscovery of Flaming Star, mainly because it was a serious western by Don Siegel. Yes, Auteurist Movie Snobs R Us. 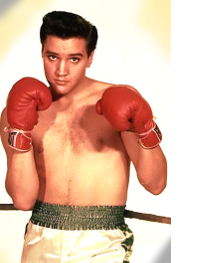 Working at MGM Home Video when it still distributed Turner-owned product was a little frustrating on the Elvis home front. The women marketers in charge of the department were down on vintage 007 because they rejected the vintage makeup on the Bond girls. Yet the main lady in charge still thought Elvis was the bomb — when pressed to explain why, she said she thought him a terrific dancer. I therefore concluded that the Elvis appeal had nothing to do with the movies he was in, which seemed a terrible waste of his talent. Roger Corman couldn’t have done a better job of going cheap on the majority of the ’60s Elvis pictures that I had to work with.

Fairly early on, when Elvis was probably still interested in being a conventional movie star, the Mirisch brothers enticed Colonel Parker to let Elvis do a couple of United Artists pictures, with directors of the caliber of King Creole’s Michael Curtiz. Follow that Dream with Gordon Douglas is an okay sentimental story, where Elvis is a country-born doofus-hunk over whom various women fight between songs. But the Mirisch organization did the unexpected by also letting Presley loose in a real movie not entirely subordinated to his star persona. Kid Galahad is a remake of the 1939 Warners picture of the same name.

Elvis’ character Walter Gulick has been enlarged from a supporting part in the original film yet is still not the whole show. Although he holds center position, the story of a semi-corrupt fight manager is given nearly equal emphasis. Yes, Elvis sings and even dances a bit, but he’s part of an old-fashioned but worthwhile story. The movie is an unexpected charmer.

Just out of the Army and broke, Walter Gulick (Elvis) returns to his birthplace, a tiny resort community in the mountains. He finds his way to the hotel of Willy Grogan (Gig Young), who has undermined his profitable business by gambling and associating with mobsters. Willy runs a pugilistic training camp, and Walter hires on for the morning as a practice partner for the young boxer Joie (Michael Dante). When Walter proves unusually impervious to punches and takes out Joie with one blow, Willy cooks up a scheme to rope him into some profitable bouts. Not pleased with Willy’s exploitative ways are the good-hearted trainer, Lew Nyack (Charles Bronson) and Willy’s frustrated fianceé of three years, beautiful Dolly Fletcher (Lola Albright). Walter is given the name ‘Galahad’ when he knocks out a creep bothering Dolly and is soon a beloved local celebrity. Romance flowers when Willy’s sister Rose (Joan Blackman) arrives to put the hotel’s accounts in order — the gentlemanly Walter captures her heart right away. Willy is not happy for his sister to get involved with a boxer, but he can’t give the matter his full attention: the mob kingpin Otto Danzig (David Lewis) arrives, and uses his clout to force Willy to misuse Walter’s talents.

Kid Galahad employs the oldest boxing narrative on the books, but as the late Bob Birchard was fond of saying, everybody loves ‘a simple story for simple people.’ Simple charm does the trick, that and the surprise of characters devoid of cynicism. Elvis’s Walter enters singing on the back of a truck. He’s too good to be true — he not only is a great boxer, he fixes cars in a matter of seconds, restores a cute Model T Ford in his spare time, and demonstrates excellent manners around women. He even has kind words for Willy, and blames his managerial scheming on the crooked fight game.

The Mirisch organization didn’t go cheap on the movie. Much of it is filmed on location in Southern California’s Idyllwild, which back then was still a lovely, largely undeveloped mountain community. The film is carefully cast. Gig Young gets a break from a lot of loser roles playing second banana to stars like Cary Grant. His Willy Grogan begins as a ripe jerk, but gets a chance to atone. Young’s part is the Edward G. Robinson lead role from the old movie, but played in a different emotional key.

This is a must-see Charles Bronson picture. Bronson’s trainer Lew Nyack is a 100% nice guy all the way, always speaking up for what’s fair. To be frank, playing opposite Elvis didn’t help very many actors, but Bronson plays good support, in actual scenes worth our attention. The reward is that Charlie gets the strongest heroic bit in the picture. On his way to formulating his eventual stoic ‘Golem’ screen image, Bronson tried just about everything. Be prepared, because in this movie he smiles. Not once or twice, or just to provide contrast for his usual miserable expression. He smiles a lot. 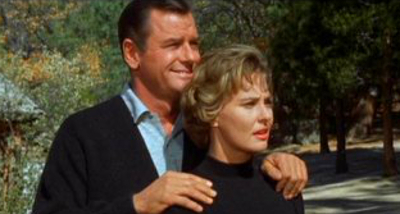 The leading ladies are not just around for coloration — see Red Line 7000 for that. The marvelous Lola Albright never got the breaks she deserved, leaving us to be content with her limited showcase parts in pictures like Champion and The Tender Trap. Her under-used brilliance is best seen in Lord Love a Duck and a picture that ought to be picked up by Criterion, A Cold Wind in August. Ms. Albright conveys intelligence and depth in the somewhat thankless role of Gig Young’s main squeeze.

Also given a great opportunity to shine is Joan Blackman, whose grace and beauty — those piercing eyes! — were memorable in the idealized role of an Oahu princess in Blue Hawaii. Blackman’s ‘girlfriend’ role here is also given extra depth. In the scene where Walter and Rose size each other up, Blackman settles into a chair and gives him an unblinking stare that says it all. Blackman possesses a poise that made her the perfect love object for Presley’s virginal screen image. Her simple commitment redeems scenes that ought to be eye-rollingly silly. A town picnic was staged at Lake Hollywood, a small reservoir not a mile from Hollywood & Vine. Just to the right of the setting seen in the movie is the dam that bursts in the disaster film Earthquake. Surrounded by an assortment of typically over-enthusiastic Hollywood extras, Blackman’s ‘twist’ dance number becomes a highlight through sheer personality. Most Elvis co-stars just grin and stay out of his way, but Ms. Blackman seems to be having the time of her life.

The key may have been director Phil Karlson, who clearly took the Kid Galahad assignment seriously. Karlson lit up the ‘fifties with a string of excellent crime/noir pictures, the best of which are classics — Kansas City Confidential, 99 River Street, The Phenix City Story, The Brothers Rico.  His sharp direction keeps the show’s elements in balance — the innocent Presley and the cynical Gig Young, the intelligent women, positive-minded locals and swell-guy Charles Bronson. With Karlson’s crime experience the crooks can also be taken seriously. Previously one of the slimy executives from The Apartment (“Go to it, Buddy Boy!”), David Lewis is an effective mob menace. His underling Marvin (Richard Devon of War of the Satellites) is as good as mob thugs get. 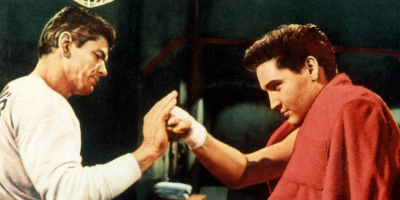 Walter Mirisch and his producer David Weisbart chose a great cameraman as well. Burnett Guffey filmed some of the best B&W pictures of the ‘fifties, including a few of Karlson’s better pictures. His attractive images give Elvis a pleasing baby-fat look, while rendering Lola Albright and Joan Blackman luscious in rich, warm tones. Guffey would soon move on to his best-known picture, Bonnie & Clyde.

I like Stuart Galbraith’s earlier review of Kid Galahad but take exception when he calls Phil Karlson a hack. True, the director’s brand of crime realism didn’t lead to acclaim and awards, and his later movies are those of an artist taking whatever work he can get. But Karlson tops the list of ‘fifties noir directors.

The large supporting cast creates a believable small-town atmosphere. Guys usually known as villains get a fair break as nice guys: Ned Glass, Robert Emhardt, Ed Asner (in one of his first films), Bert Remsen. Walter and Rose even pay a visit to the local Irish priest (Liam Redmond), to post the Banns for a wedding. If you believe as I do that the average 1960s Elvis picture is an entertainment desert, you might discover that Kid Galahad is a pleasant surprise – it’s unassuming, honest and sincere. Those qualities are like gold these days, wherever they can be found.

Twilight Time’s third Elvis Presley Blu-ray is an excellent encoding of the attractively filmed Kid Galahad. Colors are great throughout. Phil Karlson uses rear-projection only for driving scenes, and the open spaces of Idyllwild are very relaxing.

The movie is a light boxing drama with songs, not a musical. Elvis’s six songs are a selection of sweet ballads with no fake ‘rock out’ numbers to force a change of character. The one sung on the truck ride backgrounds the title sequence. Elvis joins a sing-along on a porch, sings at the picnic and serenades Rose in another scene. But he doesn’t grab a guitar and suddenly become the old hip-twister we know. United Artists lacks discrete music stems — probably due to the destruction of an entire vault of film elements around 1989 — so a music and effects track must suffice. The extremely lame and un-hip trailer reminds us that Elvis allowed his publicity to be controlled by the same manager that made his movie career into a career-crushing money machine.

Julie Kirgo’s liner notes only have to say the truth to express Kid Galahad’s good points — it’s a good Elvis show and a boxing movie for people that have little use for boxing movies. I’m glad I finally caught up with this picture.