Do you like your noir heroes bitter and bruised, and your noir dames daring and resourceful? Phil Karlson’s gem of a thriller pits two-fisted John Payne against murderous hood Brad Dexter, with Peggie Castle the unfaithful, unlucky wife who decides to run off with the wrong guy. And star Evelyn Keyes is a pulp noir adventuress to admire, with a roving eye of her own. 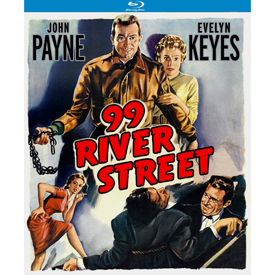 99 River Street is a top noir title in all respects — a great cast, a literally hard-hitting screenplay and direction that established Phil Karlson as a go-to talent for tough guy thrillers for the next twenty years. Edward Small’s production stands a cut above product released by United Artists in 1953, when its policy of funding independents was just beginning to prove itself. By 1953 noir was undergoing a change away from expressionist cinematography, but Franz Planer’s deep shadows put us back in the original style, where dark emotions are reflected in deep shadows. Best of all, 99 River Street recreates the tawdry thrills depicted on the covers of pulp fiction murder tales, where hard women in tight sweaters cozy up to tough guys at the neighborhood bar. 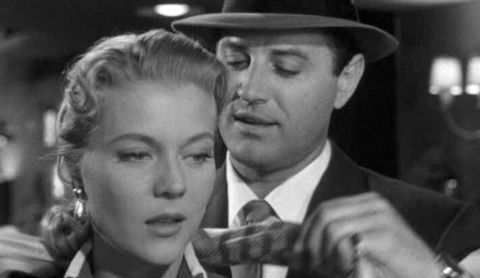 This show has a storyline as taut as a spring-loaded trap. Bitter over his lost career as a heavyweight boxer, taxi driver Ernie Driscoll (John Payne) worries that his beautiful wife Pauline (Peggie Castle) is drifting away. Lovable cab dispatcher Stan Hogan (Frank Faylen) advises Ernie to make nice with his wife, with a box of candy and the suggestion that they start a family. But Ernie’s hopes are dashed when he sees Pauline kissing another man on the street. Furious, he drives away before he does something violent. Pauline is terrified that Ernie will kill her, but her lover Victor Rawlins (Brad Dexter) tells her not to worry — and asks her to come along while he fences some jewelry he’s stolen. Fence Christopher (Jay Adler) refuses to do business, because he knows Victor killed a man in the robbery, and now Pauline is a witness. The loathsome Victor decides to solve his problems by framing Ernie for another murder. In the meantime, actress Linda James (Evelyn Keyes), an acquaintance of Ernie‘s, begs him to help her cover up a terrible ‘accident’ she’s responsible for. This leads to a surprise that convinces Ernie that all women are betrayers. But Linda only used Ernie to help her win a role in a big Broadway play. To atone she elects to help get Eddie out of his domestic problem. Linda gambles that her acting skills are good enough to fool a vicious killer.

99 River Street contains a wish list of desired pulp noir elements: the powerful ex-boxer with a hair-trigger temper; the unfaithful wife who gets in deeper than she wants; the slimy thief-thug willing to kill again to gain a profit. The whole movie takes place in a single night under cover of darkness, ranging between several apartments, a cab dispatch office, a dive bar or two, and a pet shop that receives stolen property. Our scarred hero resents the fact that everybody is using him, with Linda only the latest to take advantage of his good nature. Even her Broadway friends see profit in betraying Ernie — swearing out a warrant for assault and battery against him will guarantee good publicity for their murder play. 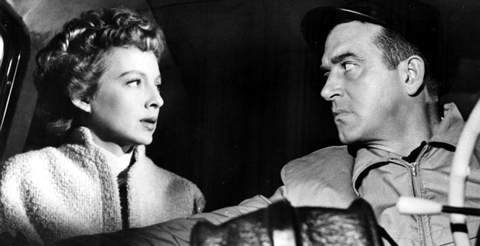 Ernie Driscoll is a lot smarter than Travis Bickle, a character who won’t show up for 25 years. But Ernie‘s dumb enough to need protection from his own rage. What he really needs is for a dame like Linda to show him he still has value, His salvation comes when she risks everything to help him.

The movie introduces exciting noir iconography and then rockets off in its own delightfully sordid direction. Evelyn Keyes is sensational as the actress willing to take risks. Blinded by the chance to score a plum part in a play, she indeed tricks Ernie, not realizing how hard he’ll take it. She proves she’s a right dame by pulling off a second acting coup. In the most suspenseful scene, she pretends to be a barfly on the make to distract the vicious Vince Rawlins at a crucial moment. She makes herself the dream girl that every mug wishes would walk up to his booth and suggest a link-up for the evening. Ms. Keyes filled roles in other noirs and is excellent in Joseph Losey’s The Prowler, but this has to be her best scene. If it wasn’t clear that her pickup attempt were a ruse for a good cause, the Production Code might have insisted it be toned down. Dead-eyed Brad Dexter is her target; Victor is the kind of narcissist vain enough to think he’s a babe magnet capable of catching a dish like Linda.

The show has plenty of rough stuff, with poor Ernie dishing out beatings left and right. He’s in the dark for most of the picture, with two women and a murderer playing him for a patsy. It’s a pure tough-guy saga guaranteed to get most males pumping adrenaline. Masculinity has to defend its turf, one way or another. 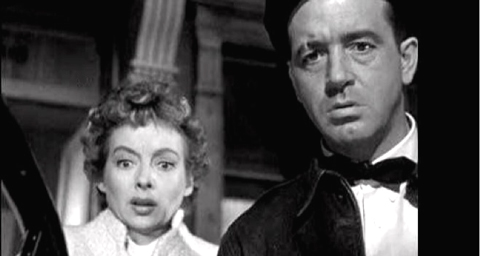 John Payne was a decade beyond tuxedoes and songs in Fox musicals, but this picture and the slightly earlier Karlson/Small noir Kansas City Confidential set his career on a solid third act path playing mature, hard-bitten tough guys. Payne’s sincerity is a good match for Evelyn Keyes, who surely saw a role with breakout potential, and ran with it. In this first year of Playboy magazine, she pushes the playgirl angle as far as it will go. Considering the Production Code restrictions at the time, this is no mean effort. Plenty of actresses in the chaste Code years were game gals, as adventuresome as they come, and Keyes is definitely one of the hottest numbers on the screen.

Brad Dexter adds to his gallery of beefy slimeballs, as seen in shows from The Asphalt Jungle to The Magnificent Seven. This is also a top title for Peggie Castle, a looker not often complimented for her acting. She’s great as the wife with really faulty judgment. Paired off with creepy fence Jay Adler is the all-purpose thug Jack Lambert (The Killers, Kiss Me Deadly). Between murderous assignments, Lambert’s character runs a pet store!

Can you tell that I like this movie? Along with Richard Fleischer’s The Narrow Margin and Stanley Kubrick’s The Killing, I keep it on hand to show visitors unconvinced that old B&W thrillers can still be superior entertainment. 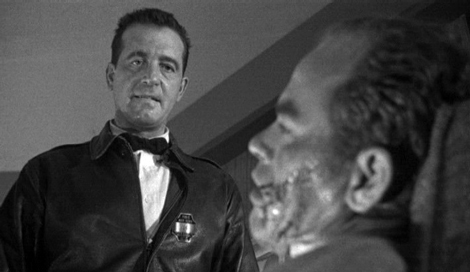 The KL Studio Classics Blu-ray of 99 River Street is a worthy encoding of this grandly overachieving mid-range noir. I was looking forward to finally seeing it in widescreen, but discovered by trial and error that it must have been filmed with the 1.33:1 aspect ratio in mind. I don’t think I need to bother Bob Furmanek on this one. 1953 was the changeover year to widescreen 1:66 and 1:85. 99 River Street’s main title block is shaped for widescreen, but watching the whole movie that way spoils many compositions that need the full remember height, North and South.

On his commentary track Eddie Muller waxes just as enthusiastic about 99 River Street, only he’s armed with 1,001 fascinating facts about the production and its principal creative talent. It’s Taxi Driver, The Prequel to him as well. Anybody familiar with Muller’s work knows that his comment tracks are a guaranteed good listen. A trailer gallery is included: 99 River Street plus Hidden Fear, Shield for Murder and He Ran All the Way.