It’s a powerful plea against the death penalty, but also an Oscar bid for a fiery actress. And don’t forget the cool jazz music score. On top of this Robert Wise adds a formerly- taboo sequence, a realistic depiction of an execution in the gas chamber. Of such things were gritty, hard-hitting reputations made. 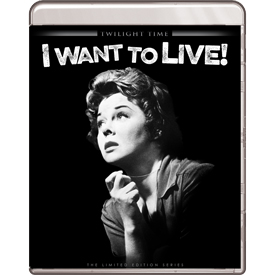 Robert Wise’s I Want to Live! from 1958 is a Can of Worms movie… start discussing its subject matter, and opinions immediately become a stumbling block. So I’ll make with the opinion disclaimers right up front (just like the movie does). It is interesting to see a movie that vilifies the press for profiting from the trial and execution of a human being… when the movie is in a sense doing the same thing. The show is up front with its status as an anti- death penalty statement, and in a civilized world I’d personally get behind that position. Given the present direction of America, I’d say the death penalty might have to be retained just for practical purposes — it may become so difficult for so many to earn a decent living that a lifetime prison term, with meals and board provided by the state, could become an attractive lifestyle.

Unbilled executive producer Joe Mankiewicz and veteran liberal cause producer Walter Wanger wanted a daring exposé of the state’s execution policy, to air the controversial view that the State shouldn’t be in the murder business, carrying out revenge for the general population. Robert Wise had a reputation for no-nonsense tough mindedness, even though his real forte was delivering popular pictures under budget and under schedule. He could also have been called a Teflon Liberal — if Joseph Losey or Jules Dassin had directed Wise’s pacifist, anti- military The Day the Earth Stood Still, it might have been picketed by The American Legion. 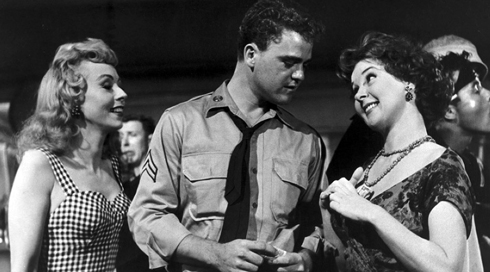 I Want to Live (let me drop the exclamation point) is a dynamic and humane picture about a California woman, Barbara Graham, who in 1955 was executed by lethal gas for murder. As with the real person, the film’s Barbara Graham (Susan Hayward) is a bad-news good time girl with a yen for fun and terrible judgment. She associates with known criminals, aids and abets them in crimes, and puts herself in a position to be convicted of perjury. She breaks parole and commits more crimes until she marries. She’d like to go straight, but for a husband chooses another habitual criminal and heroin addict (Wesley Lau). Lousy timing does the rest. After a baby comes, she sends the husband packing, and because she can’t pay the rent moves in with Emmett Perkins (Philip Coolidge) and Jack Santo (Lou Krugman) just after they’ve robbed an elderly woman. The men don’t bother to tell Barbara that they’re hot. After they’re all arrested, they implicate her as the old lady’s killer. Like a perfect storm, everything goes against Barbara. She’s arrogant and unpleasant, making it easy for reporter Ed Montgomery (Simon Oakland) to paint her as a vicious monster in the newspapers. The crime occurred when Barbara was still with her husband, but he’s nowhere to be found. When he is located he’s so wiped out from drugs that he can’t remember enough to clear her. As Barbara is already a convicted perjurer, her claims of innocence are laughed at. She’s denied first pick of a public defender, and the lawyer she gets is so low-wattage that she makes a fatal mistake, offering to pay for a witness to clear her. When he turns out to be an undercover cop, Barbara’s goose is cooked. The scary I Want to Live teaches the value of the advice, ‘stay out of trouble.’

The show is impeccably cast and performed in docu-drama style — save for Susan Hayward the actors are non-stars chosen for their everyday credibility. As this is 1958 many familiar faces go unbilled. The cops are either neutral (Stafford Repp, Gavin MacLeod) or downright evil (Peter Breck) and the prison guards and matrons drift between non-committal or hard-case abusers. For an account of the petty humiliations of prison Alfred Hitchcock’s The Wrong Man has nothing on I Want to Live. Barbara is bitter and sassy to a fault, and the moment she gives her women jailers flak, she’s threatened by dried-up martinets and tormented by a matron who enjoys looking at her naked and dousing her with cold water just for fun. The show both touches on and transcends the Women in Prison subgenre. As soon as we see those unsympathetic faces, it all feels real. 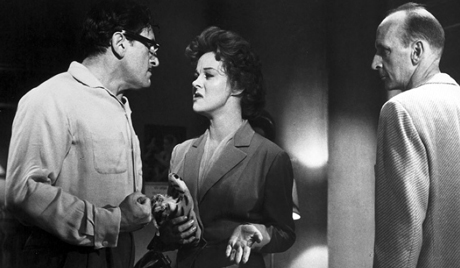 Does the movie make the accused too likable? The Production Code wouldn’t allow an honest depiction of a real Barbara Graham, who seems to have invited everything bad that ever happened to her. Is it a difficult role to play? I Want to Live is one of the first films where it looks as if a name actress grabbed the part as surefire Oscar bait. We now get a flock of these every Fall, right along with Daylight Savings Time. But Susan Hayward does seem an apt fit to play a brazen, foolhardy woman who is her own worst enemy. It’s assumed that Barbara’s morals are bad but she doesn’t come off as a malignant personality. She’s a victim all the way — we never see her mistreat anyone, and she looks like a model mother. We can congratulate Ms. Hayward for keeping such a volatile character on an even keel. Her necessary histrionics are always credible. Hayward is the only actress I’ve seen who can blow up and shout “Damn you!” five times in a row and make it seem real. It may be a showboat part, but she embodies it well.

Not since Billy Wilder’s Ace in the Hole had a film been so down on reporters. Pulitzer Prizewinner Ed Montgomery is a breakout role for Simon Oakland, a great actor with a face that would never make him a leading man. He’s much better at expressing liberal guilt than was Richard Carlson in Try and Get Me!  This part of I Want to Live is very much like the ‘bad journalist’ blacklist-bait movies of a few years before, Joseph Losey’s The Lawless and Cy Endfield’s The Underworld Story. Montgomery experiences a change of heart, but not soon enough to do Barbara any good. In one heartbreaking scene, the yellow press crashes one of Barbara’s infrequent opportunities to see her baby. Oakland has a female associate (not sure of the actress) with a sadistic streak far wider than anybody in the earlier movies. This newswoman leans in with a smile like a stiletto, and asks, “How does it feel holding your baby Barbara, knowing you’re going to be executed?”

We can give Robert Wise credit for picking such excellent actors and bit players. When interviewed he preferred to get technical rather than talk about what the movie meant. He was serious about authenticity and took pride in his accurate depiction of the execution process. The final half hour of the film is a series of painful degradations, with two holds on the countdown to wait for calls from the governor, possible stays of execution. The witnesses in the gas chamber are all male. I imagine that Wise had a difficult task trying to make them seem eager and fascinated without being too bloodthirsty. Just the same, one of the film’s big audience draws is the thrill of seeing a woman executed. No matter how the witnesses play it, they look like creeps crowding the stage to see a strip show. 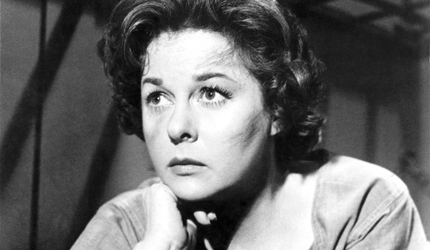 Editor William Hornbeck does wonders with the great footage Wise sends him. Susan Hayward works hard to seem rougher than can be shown. A provocative entrance shows Barbara sitting up in bed, and then laughing at her partner, in obvious excitement after sex. Barbara looks ready for anything with the soldiers she meets at parties (like Jack Weston and Brett Halsey). When arrested she has no idea that a murder has occurred (at least, in the movie) and greets the L.A.P.D. and neighborhood witnesses with a defiant stance. Told to put her hands up, she does so with a burlesque bump that says, ‘I’m no lady and you can shove it.’ They made Barbara Graham as wild as was possible for 1958. The introductory scene at a jazz club shows marijuana being smoked.

Marketing-wise I Want to Live places Hayward’s performance first and the morbid execution scene second. But the marketing also stressed the film’s jazz soundtrack. Seven Jazz Combo members including Gerry Mulligan and Shelley Manne receive billing right behind the cast. Unlike some pictures from the time, the jazz music is unobtrusive and used sparingly. The entire last half hour plays without music. Actor John Marley is flawless as the chaplain who helps Barbara walk the last mile.

Was Barbara Graham guilty? Plenty of officials said she was, and subsequent exposés lean in the same direction. That might indeed negate the accuracy of I Want to Live.  Anti- death penalty advocates would argue that it doesn’t hurt their case. Although Barbara helped condemn herself, the press and the system did everything possible to insure a slippery path to the gas chamber. Innocent people could be executed in this system, even with the long delays for appeals. All it takes is for the cops or DA to ‘mislay’ some evidence, or a stupid defendant combined with an incompetent attorney.

Robert Wise’s film makes the case against the Death Penalty well enough. Morbid curiosity sold plenty of tickets, Ms. Hayward earned her Oscar, and Wise would move on to the next hot-button topic, on a racial equality movie with Harry Belafonte. 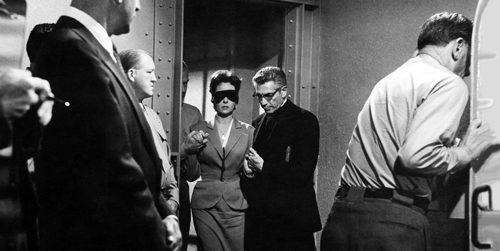 The Twilight Time Blu-ray of I Want to Live! is a perfect encoding of this technically adept, sharply filmed and edited special issue thriller. The B&W cinematography looks great and the audio track is rich and clear, with Johnny Mandel’s soundtrack music on an Isolated Score Track.

Besides the provocative trailer, the only extra is an abbreviated audio commentary by music restoration expert Mike Matessino. It’s with the isolated score; after an introduction it pops up again at about the 32-minute mark. Mike worked with director Wise for a number of years. He goes over the facts of the show before getting into the music issues. I very much like this idea of limited commentaries for some titles, and some commentators — Matessino has good content to impart, unlike many. Nothing’s worse than listening to a glorified fan pad their feelings across a long ninety minutes. For her liner notes, Julie Kirgo pulls out some choice nuggets of Hollywood lore about Wise and Hayward, both of whom took their work seriously.

As we saw with the earlier The House on 92nd Street, Hollywood docu-dramas walk a thin line of moral responsibility. I Want to Live assumes that Barbara Graham was innocent. As the movie is going to be seen long after the facts of the case are forgotten, she’ll go down in history as innocent. I certainly don’t lose sleep over this, but I’m not a relative of the murder victim. There are plenty of other issues too important to be gummed up by the Hollywood Version of history. Oops, sorry, I was supposed to ixnay the opinions-yay.