Here’s how one pushed the limits of good taste in 1974. James Caan and Alan Arkin run the gamut of racist, raunchy, sexist and homophobic jokes as bad boy cops breaking the rules, and director Richard Rush delivers some impressive, expensive action stunts on location in San Francisco. Does it get a pass because it’s ‘outrageous?’ The public surely thought so. If the star chemistry works the excess won’t matter. With Valerie Harper, Loretta Swit and Jack Kruschen. 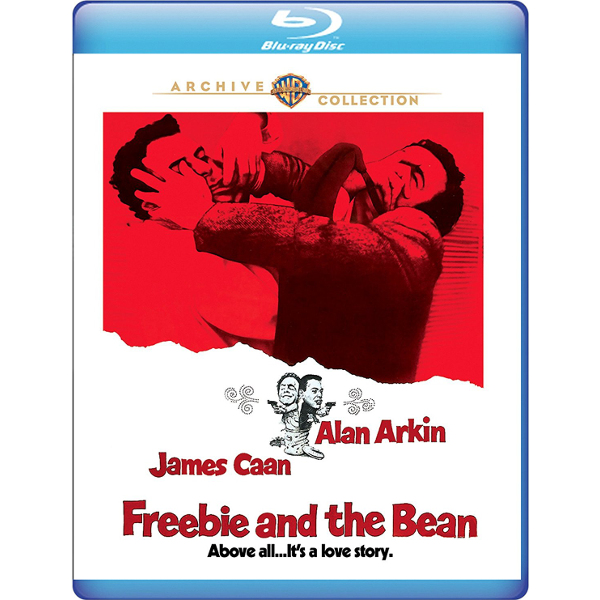 ‘Buddy’ pictures have been around forever, but I believe it was 1969’s Butch Cassidy and the Sundance Kid that instigated the notion that putting two amusing guys together in an action plot guaranteed good entertainment. The formula didn’t always work, but the 1974 teaming of Alan Arkin and James Caan cleaned up at the box office. As if inspired by M*A*S*H and The French Connection — but just for laughs – the slapdash Freebie and the Bean throws all kinds of edgy material at the screen — profanity, racial slurs, and boys-will-be boys sexism. Caan’s detective likes to use his badge to cadge free stuff (‘Freebie,’ get it?), and loves to throw ethnic insults at Arkin’s character, who is supposed to be Mexican, hence the name ‘The Bean.’ But gee, lighten up, this is a comedy. Freebie’s a womanizer, so we get a scene where he converses with Bean while lying across the bare behind of a casual girlfriend, on a bed. It’s as strong as things could get in 1974, perhaps, and still not offend the Yahoos. And who reads all that feminist film criticism, anyway? Relax, it’s all right, it’s all right.

Oh, and I should have mentioned Bullitt because Freebie and the Bean goes overboard with car chases and car crashes, filmed on the streets of San Francisco. They’re not classic material but they are wholly convincing, and the sheer quantity was surprising – the publicists claimed a tally of over a hundred car crashes. Once we know that we’ve got Bad Boys On Parade, the show never does anything really surprising. My idea of a fresh and challenging buddy movie is the truly oddball romp The In-Laws from a few years later, with Arkin and Peter Falk. [and by some accounts, it began as a sequel to Freebie and the Bean.] But the customers for Caan and Arkin weren’t disappointed.

San Francisco detectives Freebie Waters (James Caan) and Benito Vasquez (Alan Arkin) would seem to be completely out of control. They give suspects the works playing good-cop, bad-cop, and when that doesn’t work they beat them senseless. Freebie talks himself into free merchandise whenever he can, and will sleep with anything that catches his eye; Benito is convinced that his wife Consuelo (Valerie Harper) is cheating on him, and simmers under Freebie’s humiliating remarks. In the course of trying to nail gangster Red Meyers (Jack Kruschen) they roust a number of people, including some small-time hustlers. An odd set of circumstances puts them on guard duty to protect Meyers against some expected out-of-town hit men, without letting the gangster know he’s been targeted. Several massive chase scenes later, crooks and cops clash in the crowds gathering for the big Super Bowl game.

James Caan was just off The Godfather and Cinderella Liberty and was anxious to cement his all-macho image; Alan Arkin’s career at this time could use a popular hit. The two stars are reasonable but not inspired mismatched cops, as each seems to be acting in a separate bubble. Caan doesn’t convince us that he’s so dense, but Alan Arkin as usual finds sympathetic inroads, making a nothing character more than watchable. After a big career start as an ethnic chameleon, Arkin actually downplays the Mexican accent; Benito is far more assimilated than his great Puerto Rican characterization in 1969’s Popi. Latin audiences still think that Arkin is from Puerto Rico.

It’s unlikely that Freebie and the Bean will even raise an eyebrow now, as movie comedy has gone so far with extreme raunch and sexist/racist humor. The film’s police brutality and overall violence quotient is a little more touchy. These guys don’t go to work as much as they engage in a lifestyle of running wild and harassing people. No reasonable police procedure here — they bash their way into any place they wish and rough up whomever they please. It’s a comedy, but in a sometimes- disturbing context. When they corner a hired killer in a public lavatory, they don’t even try to talk to him. They instead clear the room and shoot the guy through the toilet stall door, emptying two guns each. Since all they see is his feet, how do they know they’re shooting the right guy? It would be a lot funnier now if there weren’t so many cop shootings these days with dozens of shots fired.

The car chases are quite good. Richard Rush and his second-unit experts stage complex, intricate pursuits on what look like crowded streets. The flexibility of CGI has sapped all the danger and realism from hyped action scenes, so this stuff is GOLD for fans of daredevil insanity. The stunt people really push the limit. When a teetering truck fails to make a turn, it falls on its side and slides right up to the camera, surely no further than a couple of feet away. One good scene takes place in heavy traffic — the cops race up and down two steep hills to catch up with a car that’s taken a tunnel. Too much slapstick throws off the tone at times, as with a goofball motorcycle chase. Time and violent history have also caught up with some of the better gags. At several junctures vehicles race across pedestrian plazas or plow down sidewalks, seemingly knocking people out of the way left and right. In 1974 this was wild, unthinkable fun and an obvious exaggeration. Today it just reminds us of terrible criminal tragedies.

The stars get excellent support. Third-billed Loretta Swit was in an odd place, career-wise, as a major TV superstar on M*A*S*H but not scoring in films; she’s in the picture only for a couple of scenes, and her story function seems an unwelcome holdover from an earlier, serious script. Jack Kruschen is in fine form as the mobster, although he isn’t really given choice material. Law enforcement brass Mike Kellin and Alex Rocco are absent for most of the movie, as if they weren’t needed when the slapstick elements took the fore.

Coming off best is the bright Valerie Harper, in her first movie appearance since making a splash on TV’s Mary Tyler Moore show. At first it looks like disaster time, with the thoroughly Anglo Harper doing a sloppy Mexican-American accent that soon just disappears. But she and Arkin are given a great character scene when Benito confronts Consuelo with what he thinks is ironclad proof of her infidelity. With just a few words, Consuelo demolishes his every argument. It ends on an endearing ‘kiss me stupid’ note.

Pushing Freebie and the Bean over the PC cliff for many viewers is the way it handles its homosexual characters. Freebie is of course unconstrained with insults and slurs that we’re supposed to find funny because, ‘gee, can they really say that in a movie?’ Freebie even uses the word faggot. It’s assumed that we all can share in the demeaning joke — ‘lighten up, we’re just kidding!’ But they really aren’t kidding in this picture.

Again, nobody’s saying that off-color or ethnic jokes aren’t funny, but seeing this 1975 film now really shows us how things have changed. Today’s out-of-control public discourse makes one want to lean in the direction of more civility: the ‘freedom to tell it like it is’ is now used all too often as an excuse to verbalize vile racist, misogynist and homophobic beliefs with impunity.

Ever since cop shows could emulate Psycho, lazy writers have slammed gays as psycho killers that get their jollies by dressing as women to commit their crimes. The unmasking provides an easy ‘twist’ ending. I saw the often insensitive (and not consistently funny) Blake Edwards’ 1966 private eye thriller Gunn on a big screen once and mostly recall its terrific new arrangements for the famous Peter Gunn music theme. Gunn has pretty much been AWOL for decades, and I’m not sure why. I don’t remember it clearly, but I believe it finishes with a scene where the killer is revealed to be a transvestite psycho, and we’re supposed to be pleased to see him die a horrible death, as much for what he is as for what he’s done. For a while the homicidal transvestite gay villain was sort of a substitute movie monster – interesting, not human, killable.

The point is that Freebie and the Bean does the exact same thing as Gunn. A female menace shows up at one point, and proves to be not who we think she is. It’s an excellent disguise, but it’s neither clever nor outrageous enough to convince us that the filmmakers are being excessive for any but the most exploitative reasons.

Even with these issues there’s plenty to enjoy in Freebie and the Bean. Only a PC crazoid would get all up in arms about it – it was 1975, and American movies in general have never been a beacon of elevated taste. More galling is the way the show undercuts itself. The last scene suddenly switches back to seriousness with an ambulance ride to the morgue. It then doubles back as if saying, ‘just kidding,’ and finishes off like a Three Stooges short subject. You’ll know what I mean when you see it. It’s as if, during the end credits for Thunderbolt and Lightfoot, Jeff Bridges were to suddenly spring to life with a big smile. Fooled ya!

The Warner Archive Collection Blu-ray of Freebie and the Bean is a fine transfer of this Panavision picture, that I’ve previously seen only in grim pan-scan versions. The impressive location shooting in San Francisco looks great, and the wild stunts and auto pile-ups must have made the set look like a demolition derby. We can imagine a little light bulb appearing over John Landis while seeing Freebie: “Gee, ridiculous overstated car crashes are funny . . . maybe if we add music . . .”

The show’s most publicized stunt sees a car piloted by our knucklehead detectives flying off a freeway and into a fourth-floor apartment building. It looks real enough but I think it’s a clever visual effect: It’s a locked-down angle unlike anything else in any of the action scenes.