This Alan Arkin-Peter Falk show is finally being recognized as a comedy mini-masterpiece. Afraid of offending his daughter’s future father-in-law, a dentist is sucked into a nightmare of crime and jeopardy, as a jolly Chinese airline whisks him away to a rendezvous with danger in a Latin American dictatorship. It’s a gem of sustained mirth. 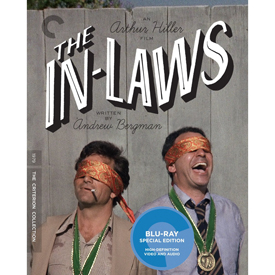 Good grief, I had no idea that Albert Brooks and Michael Douglas remade this movie back in 2003. I long ago lost track of all the forgettable light comedies out there; in the late 1970s talent from Saturday Night Live talent flooded the market. Chevy Chase was never particularly likeable, while Bill Murray somehow penetrated the cynicism barrier intact. Comedies were constructed around ‘funny people’ like Gene Wilder, but seldom gave them anything inspired to do.

1979’s The In-Laws is a rare item, an unpretentious show that was initiated by comic talent desiring nothing more than to make a funny movie. At least that’s what Alan Arkin says, and he’s always seemed an honest guy. At TCM Fest a few years back, he had the audience in his pocket in about twenty seconds. Easygoing, reasonably secure and not overtaken by the curse of vanity, Arkin lifts everything he’s in.

Peter Falk is everyone’s favorite from way back. He can play nervy guys and nice guys with a temper, but even his Columbo is an engaging fellow, always trying to put people at ease, as if compensating for an abrasive basic character. Arkin says that he didn’t care what the story was about, but he thought the right formula would be for Falk’s character to be driving his character nuts through the whole film. 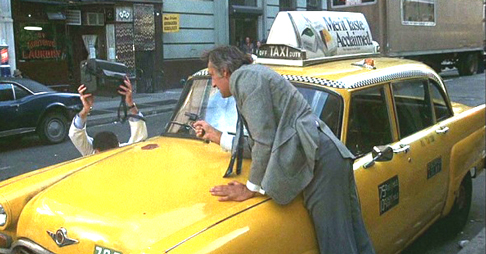 Everything hinges on the peculiar personality chemistry between these two stars. Both actors frequently stole movies by being the wild card character, the one whose actions or words couldn’t be predicted. Together, they work a special kind of magic: nothing brilliant or inspiring seems to be happening, but the joy of watching their interaction grows with every scene. By the time the show crosses the line into outright silly fantasy, we feel so entertained that it could take us most anywhere.

Experts consider Andrew Bergman’s script to be as strong as the actors’ input. Established dentist Shel Kornpett (Alan Arkin) meets his daughter Barbara’s prospective Father-In-Law Vince Ricardo (Peter Falk) just a few days before her wedding. No one knows it, but Vince has just received some stolen Treasury Department printing plates to print $500 bills. Vince acts so strangely at their first meeting that Barbara (Penny Peyser) has to implore Shel not to call off the wedding. Trying to be reasonable, Shel doesn’t blow up when Vince appears at his dentist’s office the next day, asking for Shel to take a few minutes off to help him with ‘a little errand.’ An hour later, Shel has been shot at by thugs and pursued by Treasury agents, and somehow finds himself on a chartered Chinese Lear Jet, on his way to a Central American country. Vince says (many times over) that there’s nothing to be worried about. He’s a government agent on a secret mission. EGBOK. 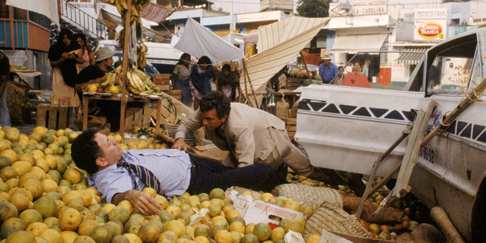 Ever meet someone who lives in a fantasy world of his own, and who insists on involving you in some harebrained scheme? Someone you can’t tell to take a hike, because they’re a relation or connected through your work? Vince Ricardo seems normal until he makes up outlandish stories at the dinner table. Shel chooses not to react out of plain decorum — if he met Vince in a bar he’d tell him to shove his stories and walk out. But what does one do when it’s important to keep peace in the family? The In-Laws transcends the category of generic, lightweight comedies through the skill of its actors. The sensible reactions of Shel’s wife Carol (Nancy Dussault) become hilarious when she takes a set of incredibly incriminating printing plates to her local bank teller, to ask about what to do with them. With her house packed with federal lawmen, she’s still not caught up with the program: ” Gee, this is like Bonnie and Clyde, or something.” (para) Carol is not labeled as a dunce, which would ruin the comedy. We still respect her.

The In-Laws succeeds by making all of its supporting cast sweet people who mean no harm, even some of the ones that try to shoot Shel dead. Paul Smith (Popeye) is one of a pair of mob goons that chase Shel down a fire escape. The agreeable cabbie David Paymer has no issues playing getaway driver for Vince, who is, after all, a paying fare who lets him run the meter while they take a break at a lunch counter. James Hong contributes a hilarious bit as a pilot for Wong Air, trying to make anxiety-stricken Shel comfortable on his flight — all in Chinese. 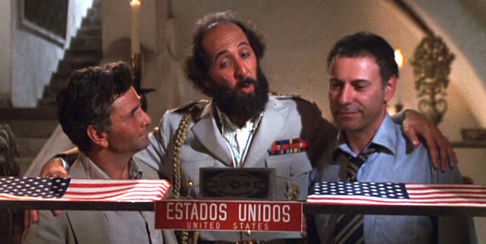 By the time Vince and Shel arrive in a Latin American country, all semblance of sanity has departed. Shel should be convinced that Vince is a psychotic — but he’s so nice. In a nod to slapstick silliness, when snipers open fire at the foreign airstrip, Vince shouts for Shel to avoid being shot by running a ‘Serpentine pattern.’ As in a Laurel & Hardy movie, the fact that Shel runs in semi-circles instead of a straight line seemingly makes him invulnerable. They’re eventually taken to the heavily guarded palacio of General García (Richard Libertini), a nutcase who collects grotesque velvet paintings of nude women and plays ‘Señor Wences’ gags with a face painted on his hand. Ed Begley Jr. is a state department diplomat who warns Shel that Vince has nothing to do with any official U.S. mission.

The In-Laws technically has no message to convey, but it does advance a certain attitude. Even as his situation becomes less and less rational, Shel is compelled to keep acting as if all is fine… which is more or less how all of us have to live in this crazy modern world. As in other comedy constructions in which ‘things have gotten totally out of hand,’ Shel endures a nightmare of anxiety. The crazy Vince turns his whole life upside down, making him a wanted felon and a moving target for spies and crooks. Vince is a nutcase, but an inscribed photo from President Kennedy backs up his claim that he helped with the Bay of Pigs invasion: Well, we tried! reads the signature. Making fun of screwed-up Latin dictatorships is a cheap comic opportunity, but in this case there’s nothing to offend — not even any negative stereotypes. Libertini’s military maniac is too cartoonish to qualify as a slur.

Key comic moments reverse our expectations for crime and spy pictures. Shel and Vince repeatedly argue loud and clear in the middle of restaurants and hotel lobbies, identifying themselves as wanted for major crimes. Writer Andrew Bergman knows that our protective instincts will be yelling, ‘oh no, don’t do that.’ Peter Falk and Alan Arkin are a winning combo right from the start. The comic tension never lets up, nobody mugs or winks at the camera. This captivating character interaction is surprisingly effective, and a good antidote to the joke-driven mugging in so many comedies. 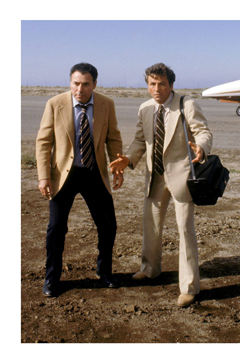 The Criterion Collection’s Blu-ray of The In-Laws is from Warner Bros., which is an infrequent licensor to Criterion; we hope the relationship continues. The transfer is impeccable and the audio bright and cheerful. The first upbeat music cue by John Morris tells us we’re in for a good time.

Criterion sometimes has difficulty with movies bearing no overt ambition toward great art, and the average film expert can have difficulty with comedy because the form has so many intangibles. To begin with, nobody agrees on what makes things funny. So the extras here lean more toward star-oriented personality issues. An archived commentary gives us the thoughts of  Arthur Hiller and the late Peter Falk, shared with Alan Arkin, who is still very much with us. The first thing Arkin and Falk do is contradict each other’s memories about whether or not The In-Laws was begun as a sequel to Freebie and the Bean. Arkin’s own extended interview is a delightful reminiscence in which he expresses his personal feelings about comedy and his sense of satisfaction making movies of substance. He deems The In-Laws among those because it shows a man opening up and discovering new things about himself. A second talking head featurette gives us some of the supporting cast, all of which say charming things about the filming experience. All of them say that comedy must be played straight to succeed: Ed Begley Jr., Nancy Dussault, James Hong, and David Paymer. Ed Begley does a Peter Falk impression that’s so good, you’ll think that Falk somehow came back to dub it. Criterion disc producer Abbey Lustgarten’s insert booklet (a real booklet!) has an appreciative essay by Stephen Winer, and director Hiller’s 2011 recollections of the film.