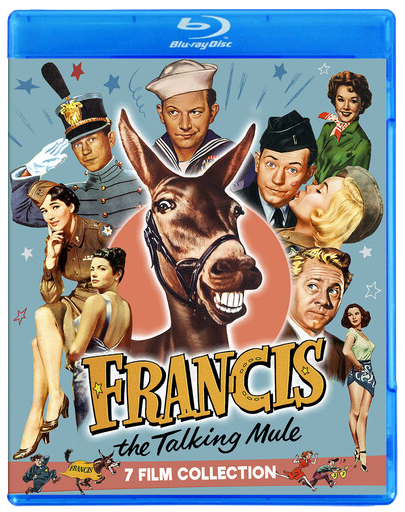 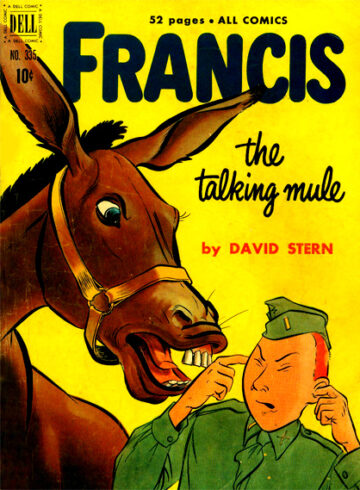 Born in 1909, David “Tom” Stern III was a journalist who lived a long and prosperous life—his father was media magnate J. David Stern, publisher of the now-defunct Philadelphia Record, the New York Post, and New Jersey’s Courier-Post. The younger Stern emulated his father’s success in the newspaper business; by 1949, Stern III was able to purchase the New Orleans Item-Tribune for $2,000,000. The rest of his fortune arrived in 1946 with Francis, The Talking Mule, Stern’s tall tale about a loquacious donkey. The scope of the book’s success was almost as unreal as the mule itself. In 1999, on Stern’s 90th birthday, a friend dedicated this verse;

Here’s a toast to Tom Stern
A man of great class.
Few could equal the fortune
He’s made off his ass. 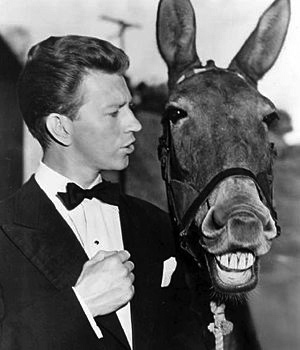 In the late forties Americans were anxious to embrace peacetime but Khrushchev’s bomb tests weren’t helping. Lighter than light entertainment was required and the story of Francis—World War II seen through the comforting lens of a fairy tale—fit the bill. The mule evolved into a legitimate franchise; Stern published Francis Goes to Washington in 1948 and his creation went on to dominate newsstands in both comic books and a newspaper strip. It was high time for Francis to go to the movies and that film, titled just Francis, went into production in the summer of 1949 and was released in February of 1950.

Francis was directed by steadfast company man Arthur Lubin who had an affinity for animals, both four-legged and human (he helmed 1951’s Rhubarb about a baseball-loving feline and directed a feral Gale Sondergaard in 1946’s The Spider Woman Strikes Back). Heading the cast was Donald O’Connor as Peter Stirling, a Second Lieutenant on patrol in Burma who finds himself lost behind enemy lines. A stray army mule rescues the chuckle-headed soldier who discovers the animal is blessed with more than just a heroic nature—he can talk (the mule’s dialog was spoken by the outsized Chill Wills—a good old boy known for braying his lines when he wasn’t barking them). 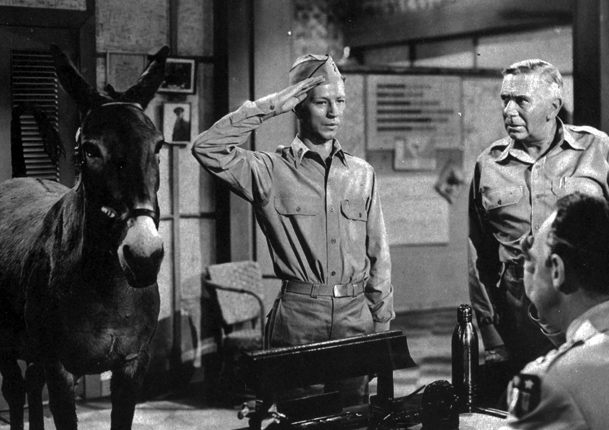 This army mule is named Francis and he’s no jackass—thanks to his free-roaming status as a barnyard animal, he has easy access to unsuspecting enemy forces and their battle plans—by using Francis’ skills as an undercover donkey, Peter gains a reputation as a genius-level military strategist. Stirling’s problem is that, unlike the stubborn donkey, he can’t keep his mouth shut. His straightforward explanations as to the source of his information—”A mule told me”—lead to more than one appointment with the staff psychiatrist. When the going gets rough for his human friend, Francis reveals his true nature and Peter is exonerated. The end.

The plot of Francis was repeated verbatim over the course of six more films. The writers for those movies, including Stern himself, Oscar Brodney, and James B. Allardice, modified the storylines and dreamed up new venues for Stirling’s adventures, and though each consecutive film seemed fresh off the assembly line, they were still powered by the same engine. They were fantasy films produced without an ounce of imagination. In other words, pure product. It didn’t matter—like children who have their favorite bedtime story, ticket buyers made the Francis Franchise one of the most popular movie series in Hollywood history. 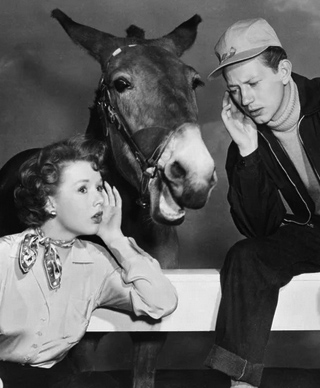 In each film O’Connor was paired with a different ingenue from Universal-International’s stable of contract players—Patricia Medina played a femme fatale after state secrets in Francis and she was followed by a pin-up parade of Hollywood hopefuls; Francis Goes to the Races, in which Francis has an inside track on the track, featured Piper Laurie (she played a bland milk and honey blond, an uncharacteristic role for the brainy actress).

The dazzling Lori Nelson gave a hot foot to the romantic triangle at the center of Francis Goes to West Point, and Yvette Dugay manufactures some sparks of her own in Francis Covers the Big Town, a tabloid farce with Stirling as a particularly inept newshound. In 1954 Julie Adams exchanged her Black Lagoon swimsuit for battle dress in Francis Joins the WACS. Sneaky studio suits cast a ringer alongside Ms. Adams; Mamie Van Doren was just beginning to make herself known as a viable Monroe alternative and couldn’t help but draw attention from Adams’ beautiful but restrained redhead (in 1957, Van Doren would join Lori Nelson at the top of the bill in Untamed Youth, a seminal slice of reform school sexploitation buoyed by hot topics of the day.) 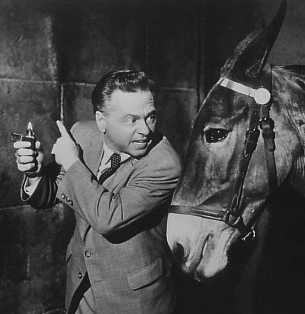 While suffering through yet another psychiatric exam in Francis Joins the WACS, O’Connor mutters without a trace of irony, “I don’t want to go through this again.” He wasn’t whistling Dixie, the next film, Francis in the Navy, would be his last. The final film in the series, Francis in the Haunted House, was directed by Charles Lamont (Lubin was gone too) and stars Mickey Rooney, who seems even more desperate for laughs than usual. As anyone who ever watched Abbott and Costello or the Bowery Boys go down this well-traveled road, there are no real spooks, just one greedy character lurking in the wings, in this case the family retainer.

The one bright spot is Paul Frees’ remarkable Chill Wills imitation (Wills quit the series at the same time as O’Connor and Lubin, a clean sweep). Haunted House was eccentric enough (Andy Hardy meets a talking mule) that it garnered a mention in Michael Weldon’s The Psychotronic Encyclopedia of Film (the only Francis film to do so). After a cursory description of the plot, Weldon dubbed the film “The worst.” Nevertheless the film earned its psychotronic credentials; the supporting cast is a melange of soon-to-be stars, memorable character actors, and oddballs, including David Janssen, Richard Deacon, and most psychotronic of all, Timothy Carey. The other films in the series are good for star-gazing too—turning up in head-turning early appearances are the likes of Leonard Nimoy, Tony Curtis and, in Francis Joins the Navy, Clint Eastwood, in his screen debut. 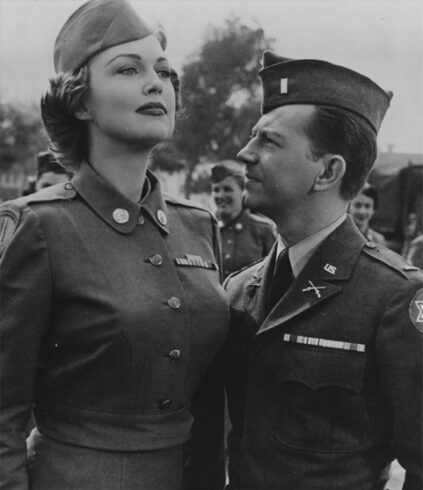 Kino Lorber has put all seven of the Francis films in one set with the films distributed over three discs—the image quality is just ok but serviceable. The transfers do reflect the confusion facing theater owners of the time; the first films in the series are presented in academy ratio but—because other formats of the era, like CinemaScope, began to rule the roost, the Francis films began to shrink and grow at the edges; from 1:33:1, to the peculiar 2:1 (seen infrequently in releases like Invasion of the Body Snatchers and This Island Earth) before settling into an eye-pleasing 1:85. An amusing set of circumstances for a series that never once resembled anything other than a TV show (yes, director Lubin produced and directed Mr. Ed.)