Could this be retitled “Dial ‘F’ for Fog?”  Jean Simmon’s greedy maid blackmails her employer Stewart Granger with proof that he murdered his wife, kicking off a criminal ‘deadlock’ in a London household. The cold-fish schemer Granger ponders his next murderous move while Simmons enjoys playing the lady of the house — having dared to leapfrog two social classes, she hopes that her victim will respond with kindness, not homicide. This gothic domestic murder tale should be required reading for marriage counselors. 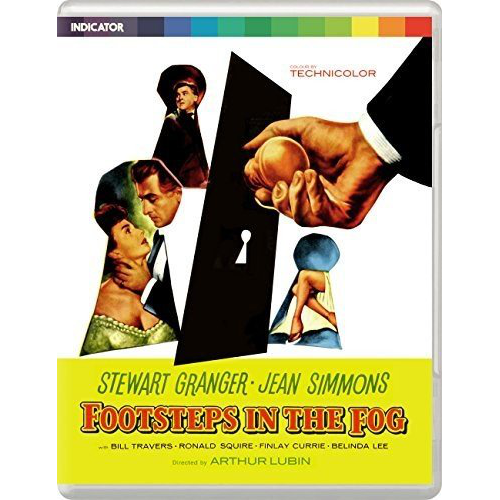 Indicator reaches in a sideways direction in the Columbia vault to access this sedate, refined chamber piece about nasty Londoners scheming and murdering to their hearts’ delight. The UK co-production captures Jean Simmons and Stewart Granger in the middle of their decade-long marriage, acting together as a couple entangled in deception, blackmail and murder. They’re both attractive, but very dangerous.

The engaging Footsteps in the Fog is a twist-mystery from W.W. Jacobs, the author of the timeless tale The Monkey’s Paw. Well-to-do Stephen Lowry (Stewart Granger) buries his wife and goes into mourning, or so his friends think — he’s really congratulating himself for having successfully poisoned the woman. Given an important job by Alfred Travers (Ronald Squire), Stephen has every intention of wooing Travers’ gorgeous daughter Elizabeth (Belinda Lee) away from her boyfriend, attorney David MacDonald (Bill Travers). What Stephen doesn’t realize is that his maid Lily Watkins (Jean Simmons) has proof of his poisoning, and has cooked up her own plan to take over his household, and his life. As she can no longer be fired, Lily appropriates the dead wife’s jewelry and clothing, has the other servants dismissed and claims Stephen as her lover. Not the kind of man to tolerate having his destiny spoiled by a second woman, Stephen plays along with Lily’s game. When a dark, foggy night comes along he follows her into the mist, with murder in mind.

It’s good clean English fun in a classic vein — our hero is a posh blaggard and our heroine a vicious liar, thief and blackmailer. The fact that each independently figures they can cheat their way into financial security AND love makes them perfect fools, the kind that bring unhappiness down on all around them.

Printed in Technicolor, Footsteps in the Fog’s tale of petty skullduggery plays out in beautiful Wilfrid Shingleton sets. The fun of such old-fashioned stories is the way all those pretty housefronts and period costumes hide so much fiendish behavior. Ten years previous, Stewart Granger prospered acting in various Gainsborough melodramas about lusty women and black-hearted men. Fog doesn’t go in for flamboyant Gainsborough stylistics, preferring to stay low-key and darkly menacing. The way our well-matched villains are trapped by their own schemes is somewhat mechanical, but it works well enough. A couple of years later, Hammer Films would bring Gainsborough production values and storytelling panache to revitalize the horror genre. Fog sticks with the older gothic values as seen in various ‘evil husband’ stories like Gaslight. Its special appeal is that the romantic angle is swapped out for a cruel parody of a marriage devoid of trust or love. The second half of the show is an interesting set of reversals and narrative twists by which justice is finally served.

The excellent Jean Simmons has never had problems with contradictory characters — and scored with an excellent portrayal of a female psychopath, the irresistible, lethal Diane Tremayne in the classic Preminger noir Angel Face. Lily Watkins is the anti- Eliza Doolittle, a scullery maid who seizes her chance to rise by trickery and deceit. Lily knows that the social system is an unjust fraud, and doesn’t hesitate to steal her piece of the pie. She’s just crazy enough to think that a man like Stephen Lowry can be coerced into loving her.

Stewart Granger never projected much beyond the surface of his characters and he’s a lot less exciting here. Heartless creeps in similar domestic murder shows are often charm personified — think Ray Milland in Dial ‘M’ for Murder. We often indulge these cads, secretly wanting them to get away with their crimes. Not so with Stephen Lowry, who woos the boss’s daughter while scheming to rid himself of Lily. I won’t spoil the plotline’s clever reversals: a second murder, a trial and criss-crossing intrigues. Even with these Grade A, O. Henry- quality plot twists, the finale is muted because we have so little sympathy for Granger’s villain.

Producer Mike Frankovich ran Columbia’s operations in London. He personally produced at least one film a year, and this was probably his biggest picture of the time. Around 1965 he took the helm of Columbia for a spell. In the ’70s he’d re-establish himself as the producer of big hits like Bob & Carol & Ted & Alice.

American director Arthur Lubin would seem to be a bad match for this film material, as he was known almost exclusively for mid-range comedies. We’re told that both Granger and Simmons didn’t like being directed by a man who just came from a Francis the Talking Mule movie. Lubin’s glossy Phantom of the Opera remake is neither a classic nor a director’s showcase. He also directed the one Burt Lancaster picture that really doesn’t bear watching, South Sea Woman. For Fog the story is everything. Scenes are played straight and formal, minus stylistic touches. Even with the rich color cinematography, the only really arresting image is the sight of Simmons’ Lily, revealed having dressed up in one of her former mistress’s fancy evening gowns. The classy English cast is mostly decorative. Belinda Lee’s pretty Elizabeth is taken in by the dishonest Stephen, while Bill Travers’ observant lawyer David is dismissed as a jealous suitor. It doesn’t matter that David has seen Lily wearing the dead wife’s jewelry (a riff given dramatic power in Hitchcock’s Vertigo). To prove his sincerity, David must defend Stephen at an inquest.

Barry Keegan’s character (no details here) ought to have a larger role, but the great William Hartnell (Brighton Rock, Appointment with Crime) has a nice bit as a lowlife relation of Lily’s who tries to go after some reward money. Aside from these bright bits and Jean Simmons’ excellent performance, the fun in Footsteps in the Fog will simply be seeing its clever story unspool — it’s not unlike an extended episode of TV’s Alfred Hitchcock Presents.

Powerhouse Indicator’s Blu-ray of Footsteps in the Fog is a solid encoding of this color & widescreen show from the mid-50s. One scene is less sharp, as if it had to be taken from a different film element, and some optical dissolve transitions show signs of misalignment color fringing. Most of the show looks very, very good. HD resolution helps out all of those fogbound scenes, that’s for sure; Powerhouse has a reputation for maximizing the bit rate, sometimes gives them the edge over competing product.

In lieu of a commentary we’re given a lengthy ‘Guardian’ audio interview with Stewart Granger. The lively video extras include pieces by BFI curator Josephine Botting, and this year’s most prolific newcomer to disc commentaries, Kat Ellinger. Steve Chibnall hosts a look at the short career of Belinda Lee. Powerhouse’s fat insert booklet has informative essays by Chibnall, including a comparison with the W.W. Jacobs story.

It’s interesting to read about this chapter in Mike Frankovich’s career. With Robert S. Birchard, I projected movies for Frankovich and his wife Binnie Barnes at their house in Beverly Hills, and at his offices at Sunset and Doheny. Working for them was easy as long as one understood the rules of behavior around Old Hollywood royalty. I never had a conversation with him beyond finding out what movie he wanted to see, among the ones delivered to his screening room.