It may be a little creaky, but Dr. Cyclops is a genuine classic of the imagination, from a time long before pulp fantasy dominated Hollywood filmmaking. For 1940 audiences this must have felt like a strange dream. Five humans are miniaturized and terrorized by Albert Dekker’s Dr. Thorkel, a card-carrying mad scientist. Held firm by a giant rubber hand, ‘Mr. Crabby’ Charles Halton keeps an unfortunate appointment with a horrifying fate. Who will survive, and how big will they be?  Did Thorkel change his name to Soberin, move to California, and steal The Great Whatzit? Kino’s new HD transfer of this oddball gem is a wonderment — the Technicolor is outstanding, better than Paramount’s old nitrate studio print. 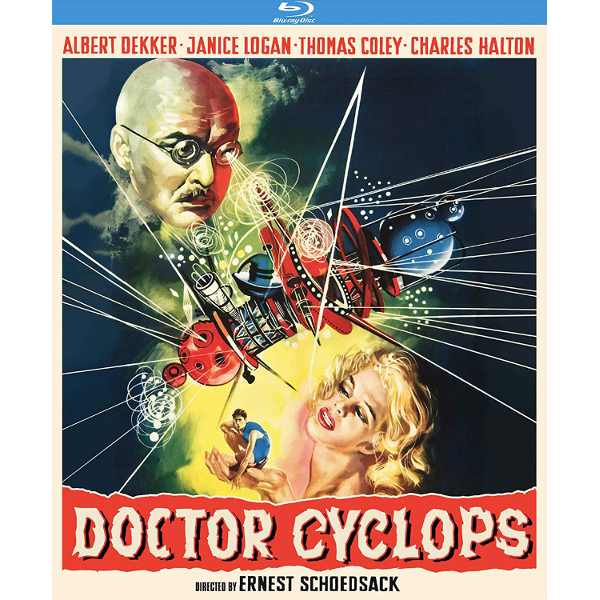 Until George Pal bounced over from Eagle-Lion, Paramount was not known for horror, sci-fi and far-out fantasy. That’s despite a few scattered pictures here and there, and making the terrific ’32 Dr. Jekyll and Mr. Hyde (which they sold to MGM). Their 1941 The Monster and the Girl is a one-off, an odd nod to trends over at Universal. Much more of a big deal is 1940’s Dr. Cyclops, an expensive ‘A’ picture where the only stars are the Oscar-nominated special effects. Ernest B. Schoedsack is the director but this isn’t a Willis O’Brien show. Schoedsack’s colleague on King Kong was likely over at RKO trying to launch his War Eagles project, and perhaps thinking about his proposed cowboys- vs dinosaurs epic, Gwangi.

Die-hard sci-fi fans may remember that Dr. Cyclops gets name-dropped in Roger Corman’s Filmgroup opus The Wasp Woman. While sanding her nails, bored secretary Lynn Cartwright talks about watching it with her boyfriend on TV. This is the film in which a mad scientist up in the Peruvian Andes shrinks people with a radium ray. ‘Oh, that one.’ The story idea sketches a poetic fantasy for an audience that the studios hadn’t yet properly defined, and nobody came to hear the routine dialogue and overly literal plotting. The Variety review called it a fantastic melodrama, but also ‘dull.’ It may not be a classic, but it must have provided plenty of matinee excitement in its time. Famous Monsters magazine introduced many of us to the film’s remarkable images long before it showed up on television. I personally didn’t see the picture until UCLA screened Paramount’s nitrate studio print in the early ’70s.

Dr. Cyclops begins with an effective scene: the mad Dr. Alexander Thorkel (Albert Dekker at his slimiest) jams Paul Fix’s head into his radium beam device, sort of an atomic microwave cooker. Eerie purple & red highlights appear on Fix’s skull-like face. Nothing that follows tops that vision, although we’re frequently given iconic, pulp magazine views of the doctor monitoring his atomic reactor, or whatever it is, through a blast furnace helmet. Thorkel uses a giant wrench to dip a Frankenstein– like energy collecting device into a radium mine. Are we at all surprised that he’s gone insane, with accompanying delusions of grandeur?

Thorkel shrinks some scientific visitors to 1/5 normal size; his reasons for doing so are sketchy at best. Once the Shrinkola process has done its stuff, the balance of the movie depicts the struggle of the four miniaturized captives to escape. They must be resourceful to climb on chairs, open doors, etc; once they escape Thorkel’s cabin, they’re confronted by a menacing cat and an alligator. The script works hard to justify the promising title, with talk about moral myopia. The classical comparison to Odysseus and Polyphemus is complete when the tiny people try to neutralize Thorkel by breaking his spectacles. A committee must have been involved with that one.

An accomplished actor, Albert Dekker’s voice was singularly intimidating, menacing. He made strong impressions in some classic pictures, from 1939’s Beau Geste to 1969’s The Wild Bunch, a great picture to go out on. But Dr. Cyclops remains his signature role. With his bald head and sneering attitude, Dekker personally set the cause of science back a hundred years. Five years later, when the world learned that incredibly brilliant nuclear physicists had constructed atomic bombs, they surely imagined that chortling crackpots like Thorkel were in charge.

Is Dr. Cyclops the first sci-fi extravaganza to be filmed in Technicolor?  Outside of genre pigeon-holing, it belongs to the subgroup of movies in which people are made to shrink through the use of enormous sets. I still get a kick out of Laurel & Hardy’s fall-down hilarious short subject Brats… that bathroom set must have been enormous. There are numerous other examples, but the one most compared to Cyclops is the 1936 The Devil-Doll, directed by Tod Browning. The elaborate sets (and traveling matte work) in that picture create visuals that verge on the nightmarish, particularly because the miniaturized people are committing murders under remote control. Cyclops is… less complicated, in dramatic terms. Ernest Schoedsack doesn’t move his camera very much on those terrific giant sets. The images are static, but also oneiric, like visions from a dream. The characterizations and dialogue are mostly inconsequential, which adds to the dreamlike aura as well.

Paramount certainly gave Dr. Cyclops the benefit of the full studio resources of the day. The effects are of course splendid. In the old Technicolor process making even a simple dissolve required manipulating a minimum of six strips of film. Basic shots with only the miniature people in the giant sets are fascinating. One exterior set features some extremely realistic boulders — not the usual fake rocks we see in films shot on sound stages. A setup where the tiny captives aim a shotgun at the sleeping Thorkel looks just as good as it did in stills.

I see conventional matte paintings and some split screens, but no traveling matte work. When Thorkel appears in the same image with the tiny scientists, the most frequent effect used is rear projection (RP) aka ‘process photography.’ The quality of these scenes is phenomenal for any year, not just 1940. The color match is mostly excellent. The projected images barely show increased grain and the density-contrast match is good too. A lot of trial & error effort, testing and finessing, must have going on. RP was not normally this good, and the expert Farciot Edouart had to create these illusions in the Technicolor format, where the camera ASA was reportedly something like ’15.’

One very handsome RP trick traps Charles Halton’s fussy Professor Bullfinch in a giant hand prop, while the rest of Thorkel looms behind in a rear projection. Sure, it’s easy to see how it was done, but the illusion is pretty darn clean, technically. RP in plenty of classic films has a flickering image, or light fall-off at the edges, or even scratches. Thorkel examines a shrunken pony on his desk top, a beautiful illusion that reminds us of the Eohippus in the later The Valley of Gwangi.

Henry Sharp is the first-billed cinematographer. It looks to be his first Technicolor credit, but he’s backed up by the great artist Winton Hoch, who had already shot scores of Technicolor travelogues and would later be responsible for some of the best color movies in Hollywood history, most notably The Searchers. The movie begins with some marvelously spooky interiors, and that close-up of Paul Fix’s face being irradiated (?) is a pretty wild color effect for 1940.

Although it introduces no new techniques, the end product is marvelous. Of course we can see flaws, like the thread tied to the alligator’s mouth to make his head bob around. Less obvious are a few minor depth of field problems. Foreground people and background objects are sometimes in focus while the middle ground between them goes soft. Look at the creek bank in front of the alligator in some shots. That just doesn’t happen in normal photography, and is perhaps why the Variety reviewer called some of the scenes ‘fuzzy.’ We wonder why that old review was so fussy: in general the effects are superb. The movie should be appreciated for overcoming one technical challenge after another.

Nominated for best Special Effects, Cyclops lost to England’s wondrous The Thief of Bagdad, a much bigger production that used quite a few Technicolor traveling-matte tricks, all beautifully designed. Hal Roach’s impressive, effective One Million B.C. was also nominated that same year.

The cast hasn’t much of a chance to make a dramatic impression. Thomas Coley is an insipid hero and the spirited Janice Logan must stand around in stage waits with everyone else. Halton and Victor Kilian are good character backup types, but Frank Yaconelli ends up wearing what look like red diapers for the entire escape sequence. Yaconelli’s supposedly Peruvian Pedro is a stereotyped Mexican peasant, complete with accent. Do his red diapers have a relationship to Star Trek’s red shirts?  You get where I’m going with that remark.

Making people look tiny is now a familiar gimmick, from Honey I Shrunk the Kids to Ant Man. Back in the days when effects movies were less common, Bert I. Gordon produced and directed a ‘nice try’ variation on the giant sets effects approach, Attack of the Puppet People. It has a few effective moments, but the yardstick for human miniaturization fantasy had already been established in 1957’s The Incredible Shrinking Man, a movie that works on three or four mind-blowing levels. The Kino Lorber Kino Classics Blu-ray of Dr. Cyclops is a BIG surprise. Kino touts a ‘New 4K master.’ Either they found a better element, or modern software has made the difference, or a full Technicolor digital restoration has been done. I don’t know how the economics would work, but what we see looks like they took the expensive route. This disc and the simultaneously-released Cobra Woman look sensational.

It looks better than I remember the studio print looked — less grain, richer colors and a better match between foreground elements and rear-projected scenes. In other words, if Dr. Cyclops appeals, or if you consider it an essential history-of-effects collector’s item, this disc is really going to impress.

Searching online for Paramount’s ad art for Cyclops yields a bounty of imaginative images and promotional writing suggesting that Janice Logan becomes some kind of sex toy for Dr. Thorkel. The film itself doesn’t plumb any psycho-sexual angles, let alone answer the question, ‘Is she possessed of every normal function?’ But the depictions of Dr. Thorkel, with radium beams projecting from his eyes, would encourage any 8 year-old kid to be traumatized by the sight of his friendly family doctor.

The extras menu contain a stack of trailers, and a Trailers From Hell entry with a commentary by Jesús Treviño. A recommended listen is a new feature commentary from the expert researcher, thoughtful analyst and all-round good guy Richard Harland Smith, who would never shove my head into the beam of a radium-ray generator, or so he claims.

Richard offers plenty of information about the making of the film. His descriptions of the effects processes used are accurate. Among numerous blurbs gleaned from trade papers is the fact that the film began as a ‘secret’ project. Richard’s interest in the picture is contagious. He reminds us of an oft-printed photo of a giant boot pressing on Janice Logan, despite no such scene appearing in the picture. Richard biographical info helps us better appreciate Albert Dekker, and fills us in on the rest of the non-star cast in an interesting way. Smith’s delivery is excellent — congenial and friendly.