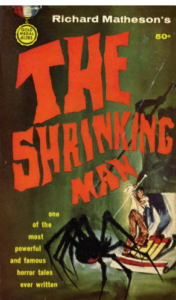 Disguised as a modest science-fiction potboiler, Matheson’s brainy thriller appeared the same year Look Back in Anger opened at the Royal Court, The Man in the Gray Flannel Suit arrived at New York’s Roxy and Howl was unleashed via City Lights in San Francisco. Existential angst was all the rage and The Shrinking Man was its poster boy.

The first hand account of Scott Carey, a well-heeled suburbanite who suddenly finds himself growing smaller and smaller, Matheson’s briskly paced novella charts Carey’s literal and figurative descent as the tokens of his success – home, family and even house cat – literally rise up against him.

Keeping one eye on the cash register, Matheson drummed up a series of sensationalistic set pieces including cliffhanging skirmishes with savage felines and predatory spiders to offset the book’s metaphysical sentiments and Kinsey-esque digressions (Carey, tiny but still tumescent, spends one long hot summer lusting after the babysitter.)

The truck-sized spiders and whiff of forbidden sex were catnip to movie producers who leaned on exploitation fare – Albert Zugsmith, the man behind The Private Lives of Adam and Eve, convinced Universal to fork over $750,000 for the production (nearly double the budget of that same year’s Invasion of the Body Snatchers), and hired Jack Arnold to direct (while adding a marquee-friendly “incredible” to the title).

Matheson was enlisted for the screenplay and rejiggered his own time-shifting storyline into a linear narrative – turning Carey’s journey from tall, dark and handsome to atom-sized everyman into that rare thing, an acutely observed melodrama and heart-stopping suspense film. As Wages of Fear transformed a banal truck delivery into a slow-boil death march, Shrinking Man proved that a trip to the laundry room could be fatal.

At first glance, the hero of The Incredible Shrinking Man doesn’t seem so incredible – lounging at sea with his dishy wife Lou, he’s  no more than a generic male model sprung  from the Spiegel Catalog’s swimwear section. When his helpmate goes beneath to scare up more beer, a dense cloud rises over the horizon and surrounds the unwary vacationer – the mist passes by but leaves his skin with a preternatural glow. Days later he begins to dwindle.

“Every unhappy family is unhappy in its own way” and before long Scott and Lou are watching each other through the wrong end of the telescope. No longer the “little woman” Lou plays the concerned mother to Scott’s petulant half-pint – compelled to dress like a child he decides to act like one, moping in a oversized armchair like an unattended ventriloquist’s doll.

The restless Carey resigns himself to haunting bars and diners, a fugitive suitable for an Edward Hopper street scene. He finds some consolation in a brief friendship with a cheerful circus performer (April Kent), a compact beauty who only comes up to his chin. Until she doesn’t. 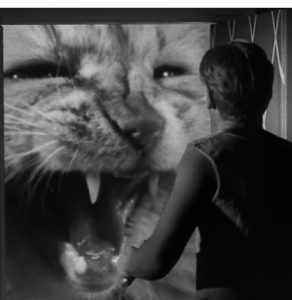 Now five inches tall and still southward bound, Carey takes up residence in a split-level doll house where an angry house cat chases him down the cellar and into the darkness.

Convinced of the worst, Lou prepares to surrender her home while just twenty feet below the kitchen her husband roams the basement garbed in a burlap tunic and makeshift sword – a mythological hero with an all-American dilemma – Orpheus is trapped in the underworld while Eurydice is upstairs packing the Buick.

Carey’s subterranean nightmare, taking up over 40 minutes of an 80 minute film, is his final test – all that remains is a harrowing battle with a hungry tarantula, the manifestation of all his tormentors rolled into one.

Carey slays the monster but celebration is not on his mind – finally tiny enough to crawl through the the mesh of a window screen, Carey ponders the stars and sees his future, experiencing an an out-of-body revelation not unlike the transcendental finale of 2001 – though Scott isn’t reborn ala David Bowman, hope has replaced horror and he comforts himself (and the audience) with thoughts of celestial immortality, a Saturday Matinee sermon for the Eisenhower era. 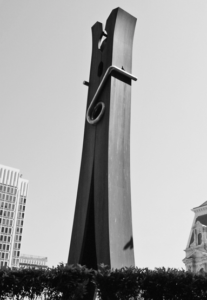 Clifford Stine was responsible for the wizardly effects cinematography and the prop crew was headed by Floyd Farrington and Ed Keyes. Collectively they transformed Scott’s world into a parade of brilliantly sculptured monoliths – from scissors to matchboxes to mousetraps – that suggest Claes Oldenburg at his most playful and ominous.

Aside from his atmospheric work on TV’s Peter Gunn, this is probably cinematographer Ellis W. Carter’s finest hour – the bland creature comforts of the Carey living room giving way to a shadowy cellar world is a tribute to Carter’s skill and the rock-steady craftsmanship of the Universal Studio system.

There are still no stateside Blu rays to be had of Arnold’s “mini” classic though Koch Media has released an HD version in Germany and Arrow Video recently weighed in with this 2017 Region 2  release in the UK.

Unfortunately the Arrow transfer is all over the map, soft and grainy in some scenes and inexplicably sharp in the effects-driven sections (which usually look awful in ’50s movies,  contending with rear projection and film processes ala the Ray Harryhausen animation fests on home video). 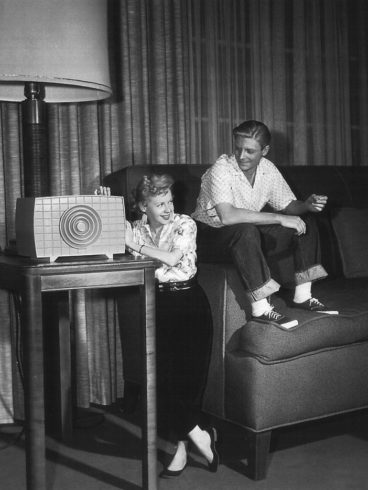 The disc comes with a good selection of supplements but it would have been nice to see a behind-the-scenes photo gallery of the cast and crew horsing around with the oversized props – after the shrinking man’s tribulations, it’s a genuine picker-upper to see the actors having so much fun.

The extras include a fact-filled and occasionally autobiographical commentary from Tim Lucas, a documentary on Arnold’s career featuring forever young Bob Burns and the late Bill Warren along with two trailers, each narrated by Orson Welles (presumably quid pro quo for Zugsmith’s role in Touch of Evil, though Welles most likely appreciated Arnold’s looming camera angles.)

Also included is a “home movie” edit from Castle Films, the Reader’s Digest for movie fans, which makes a grim story even grimmer, ending the film at the moment Scott is whirling down a drain while Lou makes her departure – the abrupt end title is the final nail in Carey’s Super 8 coffin.

The official rundown via Arrow Video:

And last, and far from least, is Glenn Erickson’s review of the German Blu ray.