Delmer Daves’ easygoing cattle drive western can’t make an action hero out of Jack Lemmon, but with fine work from co-star Glenn Ford it presents a thoughtful anti-myth: no glorious rescues or noble gunfights, and the demure maiden doesn’t wait for the handsome cowboy hero. With Brian Donlevy (excellent) and Anna Kashf. 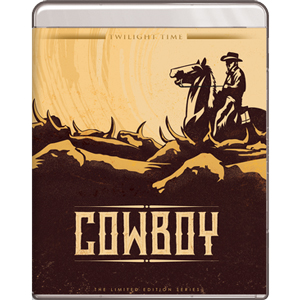 Not Delmer Daves’ best Western, but a rather good movie, Cowboy makes an effort to de-glamorize the myth of the Western cowpoke while stretching the acting range of the then-new Columbia star Jack Lemmon. Well-structured, funny and fairly adult, it never quite becomes a classic.

Cattleman Tom Reese (Glenn Ford) ends his yearly trail drives with a wild party for his cowboys, for which he hires an entire floor of a Chicago hotel. Hotel clerk Frank Harris (Jack Lemmon) sheds his city clothes and joins Tom on his next drive, claiming that adventure and the great outdoors is his dream occupation. But what he doesn’t admit is that he wants to make a name for himself because he wished to win the hand of a beautiful Mexican Señorita, Maria Vidal (Anna Kashfi). Her father is a cattle supplier for Reese, and he won’t have a hotel ‘servant’ for a son-in-law. Reese reluctantly lets Harris come with him on the trail drive, but Harris finds that the learning curve for cowboys is steep, and harsh.

Cowboy doesn’t promote the connection, but it’s the autobiography of a real Frank Harris, who apparently did indeed start as a dude and go West to see what all the excitement was about in cattle country. It’s basically a trail drive movie in the tradition of Red River and The Tall Men, but refreshingly unconcerned with grand themes. It concentrates instead on the grief, grit and anti-heroic reality of living with those smelly, troublesome, skittish animals called cows. Reese is just a well-to-do businessman, and has no plans to build a mighty West, gun down Mexicans to take their land, or chase Jane Russell.

As in just about everything he was in around this time, Glenn Ford handles both the drama and the comedy well. He’s tough enough to make you believe he likes the Jack Lemmon character without going all soft inside. Lemmon is a good actor who tends to overact in really serious work. In my estimation, the good will he sparks in his best comedies (Mr. Roberts, The Apartment , Some Like it Hot , Avanti! ) doesn’t always translate to Oscar-sniffing roles like Days of Wine and Roses and the insufferable Save the Tiger. There’s a fine line between his romantic-mensch characters and the strained whining of pictures like The Out-of-Towners. Just before this film, Columbia put Lemmon in an unlikely concoction called Fire Down Below , trying him out as a tough-guy sailor. Next to authentic tough guy Robert Mitchum, Lemmon looks like a silly fool in a striped T-shirt. The idea of them competing on an even basis for Rita Hayworth is laughable, Nice calypso song, though. 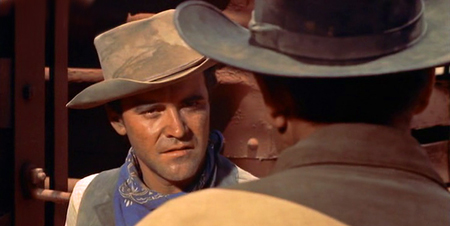 Most of the ‘teaching moments’ that give Lemmon’s greenhorn trouble deal with the harsh code of conduct on the trail. Some of the incidents remind us of the Howard Hawks macho male pro unit. A cowboy (Strother Martin) dies as a result of stupid horseplay. John Wayne would horsewhip the offender, but Glenn Ford knows that the perpetrator feels lousy about what happened, and lets the whole thing go. Guys die, and there’s little use in crying about it. Later on, a cocky cowboy (Dick York) takes the woman of a vaquero in a Mexican cantina. Lemmon’s Harris demands that the cowboys rush to rescue him, but Reese and the others know better. If the idiot wants to get himself in so much trouble, he needs to get himself out of it too. A rash move could get all the cowboys killed.

The conflict between Harris and Reese is a little overstated, as Lemmon’s Harris is supposed to become more ruthless for a while, reacting to what he thinks is an ignoble code of camaraderie. Edmund H. North’s name is on the credits but Dalton Trumbo is now the writer of record for Cowboy. Instead of flashy heroics the picture gives us tempered realities. Ford’s Reese makes an effort to square things with Harris, and they learn to understand one another. The cowboys, including good turns from King Donovan, Richard Jaeckel and Dick York, aren’t sentimentalized. Trumbo’s sensitivity is instead directed to the treatment of the Mexican characters. Reese’s first buddy is Paco, and he’s granted full respect as an intelligent, even witty guy. He’s played by Victor Manuel Mendoza, who elsewhere was used as a brute in Hathaway’s Garden of Evil and Parrish’s The Wonderful Country. 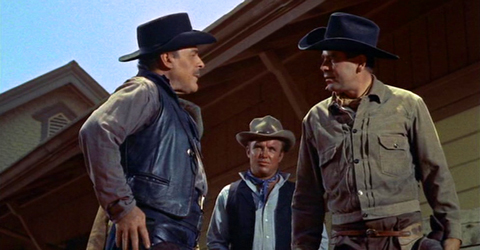 Equally sensitive is the handling of the gunfighter character played by the aging actor Brian Donlevy. His Doc Bender has joined up with the drive because he’s tired of defending his reputation. We immediately suspect this is a setup for a later gunfight scene. But age has turned Donlevy into a kinder, gentler man no longer up to the game. His character arc is resolved just the way it might in real life — off-screen, with little our ‘heroes’ can do about it.

Trumbo also surprises us with the romantic angle, with Jack Lemmon’s cowpunk learning his biggest lesson about women the hard way: The beautiful señorita who batted her eyes at him in Chicago turns out to be out of his reach — at least for now. She’s played by an Indian actress, Anna Kashfi, who had been in The Mountain with Spencer Tracy a couple of years earlier. Kashfi made only a few pictures, including the elusive Night of the Quarter Moon by Hugo Haas. She had me completely fooled that she was Latin in origin. Cowboy is a rare western in which the gringos don’t brush aside the Latin customs and traditions.

Is something missing? The characters resolve well and the story comes full circle back in Chicago. I suppose we expect some different kind of closure from the Lemmon – Kashfi romance. Cowboy plays as if it needs a second part, where author Frank Harris goes back to Maria Vidal, somehow. But it’s a special western just the same. 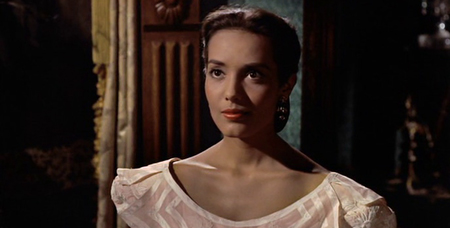 The Twilight Time Blu-ray of Cowboy is a very good transfer of a movie that was once in very rocky shape. The previous DVD from 2002 was no beauty, very flat and grainy. And we can tell that a lot of digital restoration work was needed to bring it back to its present much improved condition. I think I know what happened with a lot of Columbia pictures from this era, that were originally released in Technicolor. After initial prints were made, Columbia recalled the negatives and had them re-conformed for normal Eastmancolor photochemical print production. This meant that dissolves previously accomplished with A-B ‘publishing’ process had to be recreated as opticals, on dupe film, and cut in. As with The Guns of Navarone, this work was done on the cheap, leaving Columbia with crummy opticals and the original negative pieces thrown away. It takes heavy-duty digital work to pull color and contrast out of the weak optical negatives. This transfer makes Cowboy look attractive again, all the way through.

An audio commentary brings Twilight Time’s Julie Kirgo and Nick Redman together with author and Sam Peckinpah expert Paul Seydor together for some lively discussion about westerns of the ’50s, the stars, and the director Delmer Daves. As the debate circles around a number of points of contention, Seydor names Daves as the maker of four fine ’50s westerns, but not his masterpiece The Hanging Tree, the link between his western work and his emotional soap melodramas that followed. At least they all agree on the excellent 3:10 to Yuma.

An amusing trailer is included that compares unfavorably the flood of standard Western programming, with this superior, realistic film. It must use the word ‘Real’ fifteen times.