Can an old-fashioned monster movie still work in the 1980s? The dedicated cast for this overachieving chiller takes its story of ‘Cannibalistic Humanoid Underground Dwellers’ in directions most punk-era horrors do not. 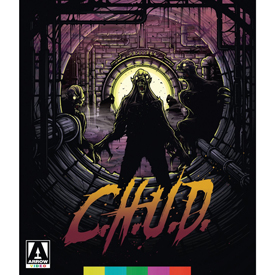 How does the monster show C.H.U.D. rate in the general parade of 1980s horror features? I don’t know — I spent the ’80s avoiding those pictures. A few years earlier at the New Beverly, Sherman Torgan couldn’t even talk me into seeing Dawn of the Dead. Of course, when he screened a brand-new print of Night of the Hunter it was a different story. Sherman was the greatest.

With the advent of DVD I caught up with most of what I missed. With a few sterling exceptions I didn’t miss all that much. C.H.U.D. has finally landed in a great Blu-ray from Arrow and it’s far better than I thought it would be. It looks as if its showcase cast snowballed from a few friends of the lead actors, who took on the movie as a shot in the dark: after John Carpenter’s Halloween any horror film could break out into major hit status. C.H.U.D. didn’t do that but it has maintained a genuine cult reputation on the level of attractions like Return of the Living Dead. It has a smart script and some surprisingly engaging characters, nicely embodied by a pickup team of actors — and some of our favorites.

N.Y.C. police Captain Bosch (Christopher Curry) has an added reason to investigate the disappearances of homeless people living in various basements, tunnels and old subway tubes beneath Soho — his own wife is missing. Quickly becoming involved together and separately are a number of Manhattan denizens: A.J. Shepherd (Daniel Stern), a reverend who runs a soup kitchen; George Cooper (John Heard), a top photographer interested in pictures of the city’s down ‘n’ outs; his girlfriend Lauren Daniels (Kim Greist), a model; and Murphy (K.C. Quinn), a reporter convinced that some kind of cover-up is going on. Both Murphy and A.J. are aware that an EPA survey has been taking far longer than it should. A.J. keeps finding sophisticated equipment abandoned below the soup kitchen. George bails out Mrs. Monroe (Ruth Maleczech), a homeless woman who lives below the streetsand who tried to steal an officer’s gun for her brother, Victor (William Joseph Raymond). Captain Bosch breaks through the chain of command to confront his boss, city officials and an EPA bigwig named Wilson (George Martin) with evidence that something, perhaps a monster, is living underground and eating people. Neither Bosch, George or A.J. are deterred by official stonewalling and veiled threats — each has a different reason to go back down to find the truth. 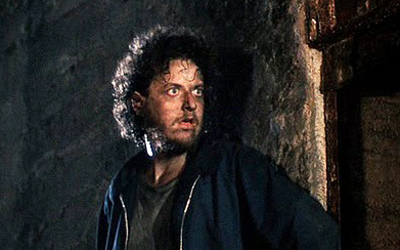 C.H.U.D. isn’t particularly gross or rude or scary, yet it’s a lot more engaging than edgier films of the time. It looks as though it was indeed a ‘creative snowball’ movie — a barely passable exploitation concept was improved mightily by a close group of filmmakers that wanted to make a hit. The director and his top actors are still close friends. * The New York (with New Jersey filling in) locations are excellent, giving us yet another early ’80s view of Lower Manhattan as a social war zone. It seems logical enough that any kind of infestation in that abandoned underworld might indeed go undetected for some time.

Parnell Hall’s screenplay, with its concept of ‘Cannibalistic Humanoid Underground Dwellers,’ was possibly inspired by Gary Sherman’s weird Raw Meat from way back in 1972. It also reminds us a bit of Larry Cohen’s Q The Winged Serpent, what with the infighting going on in the hierarchy of the NYPD and a scam being run by a EPA executive who isn’t who he says he is. The tunnel setting looks forward to Guillermo Del Toro’s Mimic. Here the monsters simply burst forward to snatch unwary passersby. A.J.’s regular homeless folk that live underground have all but disappeared. He’s enough of an activist eccentric and contrarian that nobody will take him seriously. George just wants to see that his homeless photo subject is out of danger. And Captain Bosch wants to find out why his wife disappeared. All three give unexpected depth to their characters. C.H.U.D. shares odd-duck status with Q in that its human story is completely engaging even as the monsters are only so-so. Usually it’s the other way around. 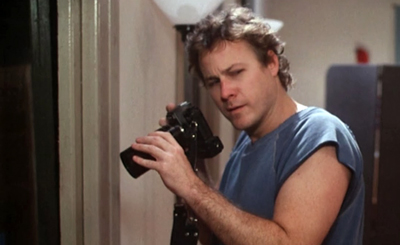 The story unfolds in a nice mix of character and suspense scenes, and our concern grows as we realize that George and Lauren are in harm’s way. As with Q, the monster content is the weak link. The rubber & slime monsters with shark teeth and glowing eyes are exactly what we expect to see, and never seem a surprise after an early shot showing a clawed arm dragging a woman into a manhole. The early suspense scenes are all telegraphed and the direction of the later scenes concentrates more on character touches. The actual monsters aren’t witty or alarming, as in the diverting Attack the Block. They’re instead rather generic human leech monsters. We do see a wounded homeless man transforming into a C.H.U.D.; that and constant prattle about abandoned chemical and nuclear waste take up unnecessary exposition time. I’d say that it’s absurd that government contractees would be so vile as to stash the toxic stuff under Manhattan… but we’re learning new lessons lately about how irresponsible businesses can be with the public health.

Yes, the drama wraps up well enough even without breaking new horror-movie ground; the fun is in seeing some favorite performers find better ways to jazz up a monster movie. John Heard (Cutter’s Way) maintains our sympathy and Kim Greist (Brazil) insures that ‘the girl in the movie’ does much more than just scream. Daniel Stern (Breaking Away) adapts his comic persona neatly to play an agitated social worker. The movie really belongs to Christopher Curry as the cop trying to function in the face of tragedy. Of the three leads we care about him the most. And who expects to be asked to care about people in a movie called C.H.U.D.? 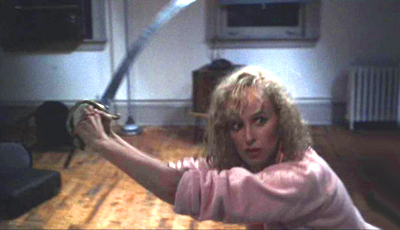 The show has way more than its share of surprise bits played by up ‘n’ coming actors: John Bedford Lloyd, Frankie Faison, Ron Yawter, Jon Polito. The biggest surprise is seeing John Goodman show up as a cop, three years before Raising Arizona. He’s on-screen for all of thirty seconds and he makes the picture his own. Someone must have talked the stage actress Hallie Foote (Courtship) into playing against him as a waitress; it’s fun to see her odd reactions to Goodman’s dialogue. We wish those two had bigger roles.

Editor Douglas Cheek’s direction generates suspense with cutaways to particular objects, like a loose shoe left in the street or a succession of doors through which we expect a C.H.U.D. to burst at any moment. One attempt to misdirect our attention, so that a monster can smash through a wall and threaten the heroine from an unexpected direction, doesn’t work as well as it should, and neither does a C.H.U.D. decapitation via an army saber. I would not be surprised to learn that somebody tinkered with the timing of some sequences before they shortened the picture, as just holding a few shots a beat or two longer would have made some surprises work better. 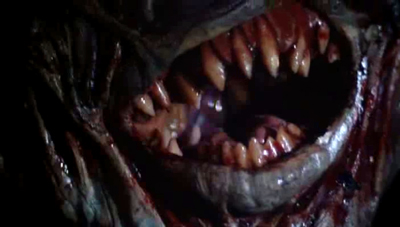 Arrow Video’s Blu-ray of C.H.U.D. is a great way to see this rewarding picture — if the cast appeals, it’ll be a fun experience. Picture and sound are excellent, showing that care and effort were expended on the lighting and sets. The audio is fine as well. I wasn’t impressed with the growling synth tones that work as a film score; in the film’s final act the music almost puts a damper on the rising tension.

The theatrical cut and the longer ‘integral cut’ of C.H.U.D. are presented as choices for viewing, on separate Blu-ray discs.

Arrow doesn’t skimp on the extras. I believe that the commentary with the director and his three male leads is from an earlier release. It’s something of a party track because the four are constantly making jokes and ribbing each other. A new track is split between composers Martin Cooper and David A. Hughes, and isolated music cues. Other new featurettes give us interviews with the designer William Bilowit and the maker of the rubber monsters, John Caglione Jr.. Essayist Michael Gingold joins Ted Geoghegan to give us a video roundup of location comparisons. And last up is a work print of a longer Lauren shower scene, using a body stand-in for Kim Greist. Gingold’s insert essay lays out the hard facts about the production and its talented makers, and warns us off the disconnected sequel-in-title-only. 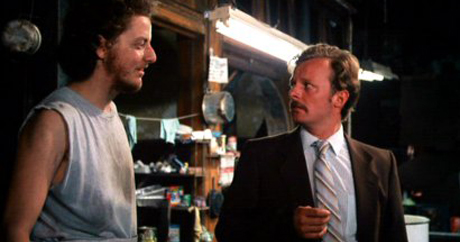 * In around 2008 — ? — my wife was invited by one of her former students to a little dinner party in Santa Monica. All I knew was that her student’s husband was an editor and had directed one movie. That’s how I spent several hours with Douglas Cheek, Daniel Stern and Christopher Curry, listening to their entertaining talk about the film biz. I recognized Mr. Curry from Starship Troopers, and Mr. Stern talked about his trip to Iraq to entertain the troops. It’s a well-remembered, very non-Hollywood happy memory. I believe Douglas Cheek was at the time deep into editing an activist documentary.