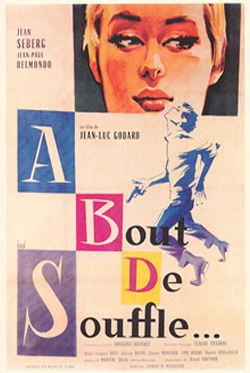 Released 1960
Distributor Films Around the World

Film critic Jean-Luc Godard’s first feature directorial outing, based on a concept by Francois Truffaut, followed The 400 Blows and Hiroshima Mon Amour‚ as a pillar of the French New Wave. Shooting on the run without permits, sound equipment or much in the way of lights, Godard rewrote and improvised anew each day. Star Jean Seberg, playing without makeup, was initially perplexed by the home movie atmosphere and Godard’s apparent misogyny, but returned to reprise her Breathless character in Godard’s short Le Grand Escroc. Jim McBride’s 1983 American remake starred Richard Gere.