Cornel Wilde’s directorial follow-up to his superb The Naked Prey was hot stuff in its day, a war movie with an unexpected emphasis on brutality and gore. Rip Torn bears down too hard on his stock character, while Wilde’s attempts to pull off associative thought memory montages come off as amateurish. But the movie has a firm fan base among lovers of movie combat, and the new transfer bests all previous video encodings. This is one movie title that connects to its target genre audience: Beach Red tells viewers exactly what they’ll be getting. It was the end of 1967, the year in which Hollywood action movies seemingly stepped onto a Violence Escalator: The St. Valentine’s Day Massacre & The Dirty Dozen (both June), Point Blank & Bonnie and Clyde (both August). The word on Beach Red circulated like wildfire through my junior high — it was said to be an incredibly gory war movie about ‘the real thing.’  We wondered how extreme it really was: that title sounded like a variation on a highway safety gore film. I also thought of it in terms of my admired cousin Jimmy, who was about to go to Vietnam. To show naive some of us were, at age fifteen I never thought guys my age might be called up. But we were barely thinking about college, either.

Beach Red is the middle film in producer-director-actor Cornel Wilde’s ‘Survival Trilogy.’  He produced and directed this gutsy anti-war picture on the heels of his highest career achievement The Naked Prey, a tale of survival in colonial Africa. Beach Red has decent production values and it follows through on Wilde’s intention of showing that war is Hell. His direction is okay but the film is really let down by a talky script and generally weak acting; the beauty of The Naked Prey was its almost total avoidance of dialogue.

Captain MacDonald (Cornel Wilde) leads an Army assault team onto the beach of a Japanese-held island. His troops take terrible casualties while pressing forward. The gung-ho Sergeant Ben Honeywell (Rip Torn) takes a disturbingly savage attitude toward the enemy: “That’s what we’re here for. To kill. The rest is all crap!”  The small patrol is cut down to just two privates that discover a large group of enemy soldiers preparing a counterstrike. In the midst of battle, soldiers on both sides daydream about the women and children they’ve left at home.

Beach Red today plays like a crude version of The Thin Red Line. The story is identical. Fearful soldiers takes a beachhead and as they undergo the horrors of combat we hear their inner thoughts about fighting and life back home. The voiceovers alternate with wistful flashback images of loved ones. Wilde’s heart is in the right place but he’s much better at directing action than he is with dialogue scenes. The long conversations between privates Egan and Cliff (Burr DeBenning and Patrick Wolfe) are sub-par, plain and simple. The screenplay’s observances on life and war are either trite or pretentious. Typical is the voiceover introduction given Wilde’s stern but wise captain: “If we had no clocks, would we still have wars?” That’s not exactly Terrence Malick grade speechifying. A poetic counterpoint to the savagery of the fighting really needs a better literary instinct.

Cornel Wilde is almost as good as he was in The Naked Prey, but the character falls victim to the script’s voiceover ruminations. Rip Torn’s performance as the tough-guy sergeant Honewell is pitched too far in the direction of the comic book Sgt. Rock — it’s an onslaught of locked-jaw mean-as-a-snake face making. ↓

The soldiers are thinly sketched types, which would not have been a liability if the acting were better and the ‘types’ more engaging. Expect regional accents and amateurish line readings. The movie would improve 50% just by skipping as much dialogue as possible. Jaime Sánchez is an exception. ↓  His convincing G.I. Columbo is one of the few soldiers that can say a dialogue line well. Columbo’s stock motivation is to incur just the right wound to get sent home. I have to assume that this film made a good audition for the plum role of Angel in The Wild Bunch the next year.

Frequent cutaways show Captain MacDonald’s opposite number, a Japanese field commander, to be a caring, worried man. Both leaders are given memory flashbacks to their families back home, shown in motion and as stills. The Japanese montages fare better, because of screaming anachronisms. The photos of MacDonald’s wife (Wilde’s real-life wife Jean Wallace) make no attempt at a 1940s look. Wallace’s long straight hair is pure ‘sixties California. Likewise, MacDonald’s young boy rides around a ‘sixties pool on a ‘sixties tricycle.

Cornel Wilde had managed some truly inspired direction in The Naked Prey, with well-observed cutting that added to the film’s considerable you-are-there excitement. Here the editing comes off as mannered, as if someone had taken Wilde to an Alain Resnais film festival. An opening transition from a painting to live action is more surprising than it is successful, but we give it a definite A for effort. Also ambitious are the many flash-cuts of stills and moving images that express the soldiers’ panicky thought processes. We cut several times from a fevered face to a repeated moment of violence or gore (dread!) or a loved one back home (regret!).

Wilde’s avant-garde editing effects too often feel like an imitation of art movies. At one point a man is pinned down on the beach, too frightened to move forward; Wilde keeps cutting back to a giant close-up of a bug with a large boot ready to crush it. That’s pretty close to Eisensteinian montage, true, but it’s also a big distraction. At another point a soldier wading ashore is isolated in a vaseline-created iris, as his voiceover whines a ‘Please Mr. Custer’ sentiment. The effect would be better if the smears weren’t in sharp focus — we look at the smudgy vaseline marks, not the foot soldier in the iris.

In Wilde’s next movie, the bizarre No Blade of Grass, he’d really pack in the subliminal cuts, both flashbacks and flash-forwards. The effort cheapens his message and sabotages the narrative. 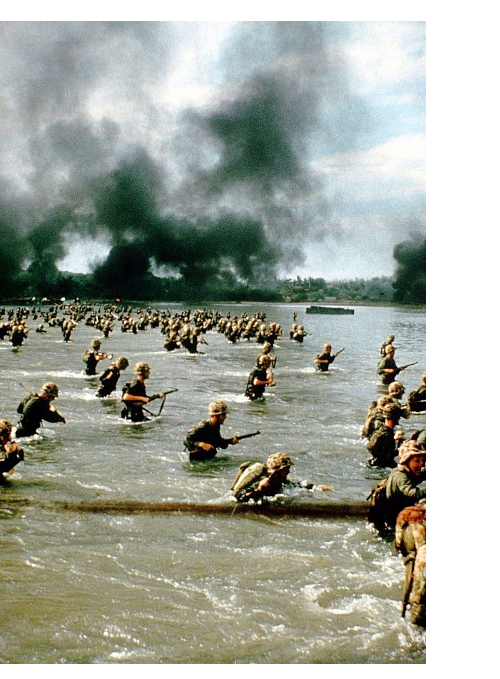 Beach Red makes no mention of Vietnam but came out in the same year as John Wayne’s pro-war epic The Green Berets. The message is supposed to be anti-war but the appeal is to audiences keen for gung-ho combat action. Despite Captain MacDonald’s misgivings the survival message boils down to Sgt. Honeywell’s call for maximum brutality. Was that Cornel Wilde’s advice for troops heading off to Southeast Asia?

Wilde may have been inspired by a Life magazine layout on combat artists that was commemorated in the docu They Drew Fire. The title sequence is made up of similar artwork by Michael W. Green and Takashi Tanaka, backed by a weak pacifist tune sung by Jean Wallace.

The key point of reference is an artist’s gruesome representation of a Marine in shock with one arm and part of his face blown away. Wilde’s movie reproduces that image along with a number of other close-up gory-wound effects. By today’s standards they’re restrained but in 1967 there was nothing like them outside of Herschel Gordon Lewis movies.

Beach Red was filmed in cooperation with the Philippine government. Troops stage a beach assault on an impressive scale. The opening mass landing is sufficiently impressive to let viewers forget that most of what follows is small scale. We see a great deal of vintage color war footage. Wilde may also have reached into studio stock libraries for appropriate generic battle outtakes. The material works reasonably well.

The movie ends in mid-scene, leaving the action unresolved and giving the impression that the battle will go on forever. The only really bogus sequence depicts a sneak landing of several hundred Japanese soldiers disguised in American uniforms. We’re told that some Japanese try a similar trick in the book, but only with American helmets and not on a large scale. In the film, it just seems that producer Wilde went for the idea because his budget couldn’t afford to outfit extras as Japanese soldiers.

The KL Studio Classics Blu-ray of Beach Red is a good transfer of Cornel Wilde’s war horror picture, which would have been much better if the acting weren’t so uneven and the script not so predictable. The image is excellent. The titles are composed in artwork frames that are almost exactly the 1:85 ratio, so the scan looks accurate. Color is always good. The matching between Wilde’s scenes, real WW2 footage and studio stock shots is much better than we expect. Even the cut-in still photo images look better than we remember.

There’s no comparing this with the old DVD, which was in matted non-enhanced letterbox format.

The audio mix is also fine — we don’t tire of the constant battle noise as happens in some shows. Like I say, when watching Beach Red I feel like a studio mogul in a screening room, mentally dictating editing instructions: “Drop that dialogue line,” “Muffle that line under noise.” “Drop that line too.”  The movie’s getting better already.