An excellent example of a thriller that improves with age, Cornel Wilde’s survival tale is a lean ‘n’ mean exercise in first-person terror. Sent barefoot and naked on a hopeless ‘run of the arrow,’ our hero earns our admiration from his first desperate steps. Actor Wilde may never have directed anything else quite as good, but this winner cements his name in the achievement books. 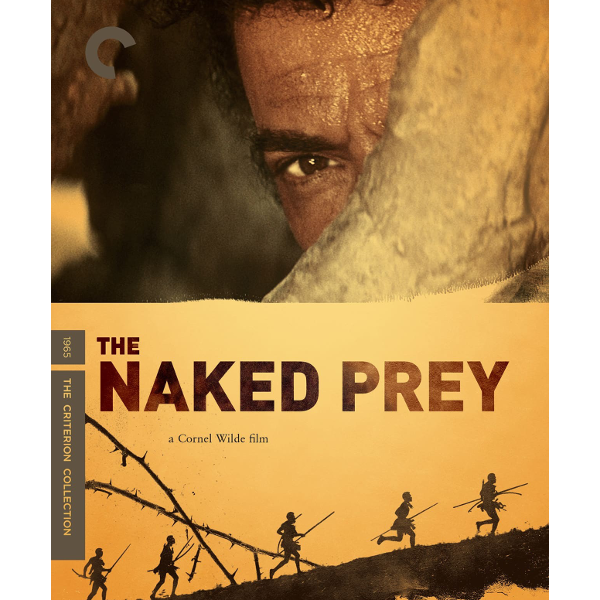 In Panavision and blazing Technicolor, this grueling survival ordeal held us spellbound in 1965 — kids forgot to eat their popcorn. Those not traumatized by the opening were propelled along with star Cornel Wilde, on a thrilling chase through the wild.

The Naked Prey is an exotic, violent African adventure from the middle 1960s. Previously known as a matinee idol of middling talent, independent producer-director Cornel Wilde proves himself a master of visual storytelling in this raw, pared-down adventure. His subject is savagery, dramatized on real African locations with African talent. Hollywood’s tradition of racist safari adventures had tapered off only slightly with the recent rise of the Civil Rights Movement. For American audiences raised on TV airings of Tarzan movies, The Naked Prey’s richly drawn portrait of African native culture was an eye-opening and provocative experience.

Benefiting mightily from the improved image quality of Blu-ray, The Naked Prey is a welcome addition to Criterion’s HD vault. The only downside I can see to its finding many new fans is an unflinching look at an elephant hunt. Modern audiences that reject anything that even hints of animal cruelty may be appalled; what with the slow extinction of the great animals of the world, the footage is even more horrific than it once was.

The storyline wastes no time with niceties. It is the 1860s. The arrogant boss of an African safari foolishly offends a native tribe, which retaliates with a bloody attack. He and two of his fellow ivory hunters are subjected to (truly) horrible deaths. The last, the safari guide (Cornel Wilde) is given a lion’s chance to survive. Stripped naked and allowed a short head start, he’s pursued by the tribe’s leading warriors through the rough countryside. The guide has combat experience; he takes his slim chance in the cruel game. He overpowers several of the warriors and by setting a brush fire manages to keep ahead of their spears and arrows. Some of the tribesmen would rather quit but their leader (Ken Gampu) forces the party to press on.

Cornel Wilde had previous success in smaller directing and producing ventures, such as his 1955 minimalist noir The Big Combo. But he hit his stride with three key pictures about savagery and survival in the Vietnam years. His war movie Beach Red was a big success but a much cruder effort. His post-apocalyptic ecological science fiction saga No Blade of Grass suffers from a hysterical tone and exploitative excess. Wilde’s best picture by far, The Naked Prey stands out as a model of inspired filmmaking. I later saw Wilde’s not-so-good Shark’s Treasure, where he seemed too aged to be playing an invincible macho hero. In The Naked Prey he’s still in admirable condition, lean and wiry, and certainly not musclebound. Cornel Wilde looks as if he could withstand the film’s fictional ordeal; it’s impossible not to admire his strength.

Cy Endfield’s 1965 Zulu filled screens with hordes of authentic Africans in a respectful ode to the Zulu Wars. The Naked Prey goes a significant step further by humanizing the native tribesmen. As Stephen Prince points out in his insightful commentary, we learn much more about the pursuing Africans than we do Wilde’s lone white ‘prey.’ All we know about Wilde’s character, identified only as ‘Man,’ is that he’s going on one last safari before settling down on his farm. He has a wedding ring so we know he’s married, but beyond that we learn nothing. We identify equally with the African warriors in the chase. They show a full range of human anxieties: pride, shame and anger, and even doubt at the wisdom of pursuing such a formidable foe. Every kid remembers the distraught reaction of the warrior who comes across a fallen comrade: the man collapses in the dirt and hugs the body with a wail of sorrow. We want Wilde’s white man to escape, but we also understand and respect his pursuers.

Wilde’s message is that even civilized men are savages, and that the horrors inflicted on the captured safari are only a reaction to an equally barbaric outside world of slavers, poachers and colonials. We see Muslim slavers seize an entire black village. The white safari boss considers the natives to be just more wildlife for exploitation, something to be brushed aside while massacring elephants for ivory. When the Africans take offense, they reciprocate with slaughter and torture on a fearful scale. The whites are dragged back to the native camp and made the centerpiece of a killing circus, an afternoon of bloody fun and games. The savage natives force one man to face a deadly cobra and, in one of the most nightmarish scenes ever, bake another alive. Old New Yorker cartoon gags about missionaries being boiled in pots no longer seemed funny.

As it was made in South Africa The Naked Prey is often cited as a political statement against Apartheid (cite Prince, once again). I doubt that any such comment was intended. The African natives initially align with our cultural image of evil heathens that enjoy killing, but we soon realize that they are simply defending their land and way of life. Considering the elephant slaughter, the fate of the white hunters almost seems justified. Ken Gampu’s sub-chief is a noble warrior. He respects his prey enough to grant the man a fighting chance, unaware that the safari guide has the potential to outfox and out-run his best warriors.

Wilde’s blood-soaked direction pits the naked runner against the cruel landscape, where every living thing must fight for survival. Crisply edited montages catalog the variety of spiny plants and cactus waiting to tear his exposed skin. Stealing the garb and weapons of one of his pursuers, the guide fells a small eland, only to have a lion steal the carcass. Finding sources of protein is as important as running and fighting; the guide tries several inedible plants before eating a gross-looking but apparently tasty snail. Inspired by the authentic setting, Wilde tells his story with a maximum of narrative clarity. In remarkable physical condition, Wilde does his own stunts and performs with admirable understatement. The champion fencer began in show business choreographing swordfights for the theater. He stages his action scenes in convincing master shots. The fights are short, brutal and bloody.

The Naked Prey was an international hit. With so little dialogue, language was no barrier. The primitive setting (and the racial bias of the censors?) permitted native nudity and a higher level of gore than was the norm for 1966. Wilde’s everyman hero enjoys a final moment of comradeship with his black enemy, which may indicate optimism for racial understanding in South Africa. But the director’s practical thoughts on regional politics can best be seen in the safari guide’s farewell to the little African girl he has befriended. Rather than continue with the guide, the girl chooses to go back and see if others of her tribe have survived. The girl’s future in her homeland lies on a different path than the white man’s, and she’s perfectly capable of finding her own way. [Note: I guess I was confused — I always thought it was a little boy.]

The Criterion Collection’s Blu-ray of The Naked Prey gives us Cornel Wilde’s achievement in an impressive presentation. The rich color cinematography is uniform throughout; it’s clear that the filmmakers were inspired by the African locations. Wilde’s direction doesn’t seem hampered by budgetary limitations, as his camera always seems to be in a good place. The violence is savage, but not entirely graphic. One very effective shot moves in on Wilde’s ear, as he picks up audio clues that his encampment is about to be attacked. The shot would communicate its meaning to an Inuit or an aborigine.

The hearty African music soundtrack comes across beautifully, and the realistic tone is heightened by excellent authentic presences and background noises, something unexpected in a 1960s film. The illusion of being deep in the wild breaks only once, when we can plainly see a white truck moving from left to right behind Cornel Wilde in the background of a medium shot. As the director performs in most every setup, he can’t always be behind the camera as well. Wilde’s sunburn, by the way, looks very real too.

The extras closely follow the contents of Criterion’s previous 2007 DVD. Stephen Prince’s informative commentary is highly recommended. We learn that The Naked Prey began as a story about a true ‘run of the arrow’ escape from Blackfoot Indians in the Nebraska territory by John Coulter, a former member of the Lewis & Clark expedition. South African production incentives enticed Wilde to shift his theme to a brand new setting. The transplant definitely ‘took.’ Prince examines Wilde’s other films and also discusses the great African actor Ken Gampu, who began as a schoolteacher. Prince lists The Most Dangerous Game as an obvious progenitor of Prey and reminds us that Mel Gibson’s 2006 Apocalypto is really an informal remake. Of course, it appears that Wilde’s original intention was to revisit an important sequence in the fine Sam Fuller western, Run of the Arrow.

In addition to a lengthy, overly explicit trailer, they include a short reading by Paul Giamatti of a 1913 account of John Coulter’s escape, and an audio & text appreciation of the film’s unusual musical score. The insert booklet contains an essay by Michael Atkinson and a 1970 interview with Cornel Wilde, at the time of No Blade of Grass.

Wilde’s film is indeed savage, but the star/director is a real gent. The final cast replay gives us only the African actors playing in Ken Gampu’s pursuit squad — not even Cornel Wilde is given a farewell credit. That plays against any thought that the film is an ego-driven vanity show.

Unrelated, but never forgotten is Carl Reiner’s black-comedy reference to The Naked Prey in his 1970 satire Where’s Poppa?  Ron Liebman’s brother is waylaid in Central Parks by some black toughs, including Garrett Morris. When they corner him the dialog is choice:

“You remember Cornel Wilde?
You remember The Naked Prey?
Well, you better start prayin’, ’cause you gonna be NAKED!”