All sing the praises of Frank Borzage, a gentle director fully committed to the idea of romance in an imperfect world. Sally Eilers and James Dunn make a go of marriage, despite their personal flaws and difficulties with communication. It’s hard to believe that films of this vintage portray behaviors as sensitive as this. 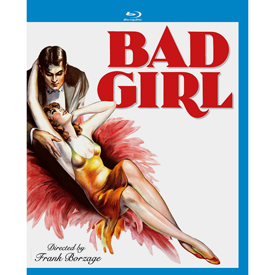 Directors don’t come any more romantic than Frank Borzage. It is said that he was one of several Fox directors, including John Ford, who were heavily influenced by F.W. Murnau, whose Sunrise was a massive hit in 1927. Borzage won the very first Oscar for directing Seventh Heaven, and won again for 1931’s Bad Girl, a deeply felt story of a rough first year in a working class marriage. Borzage brings a quiet believability to the show, which is derived from a play but doesn’t seem a bit stagey. It’s a heart-tug picture free of easy sentimentality or overstatement. The couple’s problems are basic and universal. We become deeply invested in their welfare. 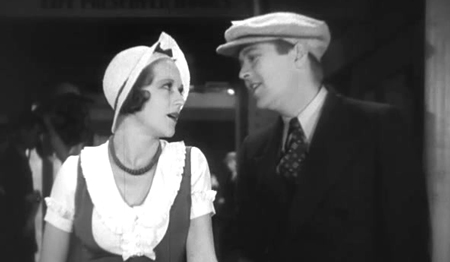 Bad Girl is as good or better than anything made in its year. The big surprise is the title, which combined with the original poster, gives the false impression that the show is a pre-Code sizzler. We keep expecting Dot to somehow become a loose party girl, or somebody’s kept woman. Although the leading lady is accused of being ‘bad,’ she’s nothing like the sexy illustration and none of the men wear tuxedos.

Edwin Burke’s script introduces Dorothy ‘Dot’ Haley (Sally Eilers of Central Airport and Strike Me Pink) as a gorgeous bride in a wedding procession, only to reveal that she’s a model working at a fashion show. Dot and her pal Edna Driggs (Minna Gombell) go out together and complain about mashers and pickup artists. That changes when Dot meets Eddy Collins (James Dunn), a radio repairman who claims that he doesn’t need a demanding woman to ruin his ambitions to have his own store. Undeniably attracted to each other, the two are frustrated by rooming house rules and Dot’s brutish brother (William Pawley, repeating from the stage play), who throws Dot out of his house on the night she and Eddy decide to marry. The marriage problems are mostly misunderstandings. Each is dedicated to the other without knowing how to best express their feelings. Dot is insecure. She panics when she mistakenly thinks Eddy has run out on her. Eddy is too proud to let her take a job. Without consulting Dot Eddy decides to change his future plans completely. Because he talks so often about babies being a hardship, Dot delays telling him that she is pregnant. When the baby is on the way, Eddy secretly goes back to prizefighting to earn extra money. Dot is convinced he doesn’t want to be around. 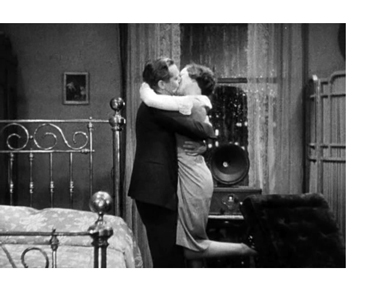 Bad Girl presents us with very individualized characters. Dot cannot reason with her pig of a brother, who simply assumes that she’s no good. Coming from an unstable family, she fears becoming yet another lost street woman with no place to go. The widowed Edna is a fine friend and pal, scrapping verbally with Eddy and helping Dot keep up her courage. When dressed up and on the town Dot puts up a sassy streetwise front. Eddy points out her attractive dress and says, “If you don’t want guys to salute you, take down your flag.” Challenged to say something friendly, she counters with, “I used to know a fellow named Joe. He drove a Ford. Did y’ever meet him?”

Eddy and Dot drop the tough talk almost immediately, on their date to, where else, Coney Island. But we can tell that Dot secretly feels herself unworthy, as if she expects Eddy to do her wrong. The difficulty is finding ways to establish a trusting relationship. Eddy proposes on a moment’s notice, because they’ve stayed out too late but also because he’s changed his mind about her. Dot at first can’t believe he’s serious. It’s all nothing like the idealized vision of marriage in the deceptive opening scene.

Bad Girl will have some viewers emotionally at the edge of their seats. Soapy melodramas of the ’30s frequently forced emotions by confecting outrageous emergencies for young couples. They typical cliché is an ordeal of flying a serum through a storm to save the baby’s life. Thus we’re constantly waiting for some tragedy to strike. Bad Girl teases this when Eddy feels responsible for Dot not having the best doctor to deliver her baby. James Dunn’s best scene is also unabashedly corny – the proud Eddy begs a fine society doctor to help, and breaks down in tears in the doctor’s office. Eddy’s moonlighting in the boxing ring seems at first to be an artificial plot complication, taking a risk with a baby on the way. But Borzage handles it completely against expectations. Eddy’s opponent in the ring, it turns out, has kids of his own. 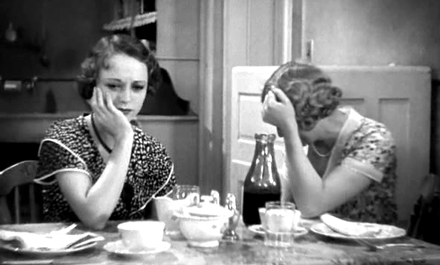 Bad Girl presents a wide range of identifiable ‘human’ situations, several of which would not be tolerated by the Production Code. A pre-Code picture, it nevertheless downplays salacious angles in favor of a healthy sexuality — when they embrace, Dot and Eddy’s love feels real. That they may have slept together is not at all a proven point, despite a telltale fade on an embrace that convinces many reviewers. But that possibility is less a moral problem than a sticking point for her brother’s intolerance. Their marriage isn’t prompted by an unwanted pregnancy. Edna provides some good comedy touches as does her mischievous, destructive little boy.

The film’s key scene takes place on the stairs of Dot’s tenement, where Eddy’s efforts at romance are tempered by reminders of harsh reality. Dot greets a neighbor-streetwalker who passes by, and we find out that Dot is the only one who will speak to her. A henpecked husband from upstairs stumbles out to get drunk. An older neighbor (Sarah Padden) must phone her sister, to report that their mother has finally died. It’s as if the hardships and disappointments of life are already laid out for Dot and Eddy. But through distrust and disillusion, they determine to soldier through. The main problem is communication.. In another telling scene he brings her to a fully furnished ‘real’ apartment suitable for middle-class people. The bed is the best available, and costs $65 dollars. He’s done it all for her, and is springing it on her as a surprise. But even that effort is misdirected: Eddy tries to be unselfish, but he’s forever acting on what he assumes are Dot’s needs, without asking her. Eddy says ‘who needs children?’, unaware that Dot is still too afraid to tell them that they have a baby on the way.

Borzage’s film skips the dramatic crises of celebrated films like King Vidor’s The Crowd or Paul Fejos’ Lonesome. Twenty years later, George Cukor would make The Marrying Kind by Ruth Gordon and Garson Kanin, starring Judy Holliday and Aldo Ray. It received kudos for attempting the same naturalistic tonel. Yet it still settles for a dramatic crisis that threatens the couple’s baby. Borzage sticks with smaller, interpersonal issues for Bad Girl. Sally Eilers speaks her unrefined English convincingly; we worry that she’ll mess up her marriage due to a lack of self-confidence. This is the first full feature for James Dunn, who shows great star quality. Eddy gains in stature as he changes his tune from mouthy bachelor to committed husband and father. A hard- drinking Irishman, Dunn ended up playing opposite Shirley Temple in several films and all but threw away his career over alcohol. Elia Kazan gave him a comeback opportunity in 1945 by hiring him to play the alcoholic father who lets down his family in A Tree Grows in Brooklyn. Informed by that great performance, Dunn’s work in this movie seems all the more accomplished. 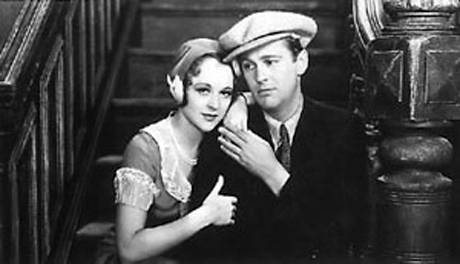 Among so many stilted, creaky dramas of 1931 Bad Girl is a real standout, an involving and moving story of an ‘ordinary’ romance and marriage. Frank Borzage’s peers in the Academy thought so as well — it was nominated for Best Picture, and took home Oscars for Borzage’s direction as well as Edwin Burke’s writing adaptation.

The KL Studio Classics Blu-ray of Bad Girl is more than welcome; it gives us high hopes that Kino will showcase more gems from the 20th Fox library of pre-Codes, which seldom screen anywhere outside of museums and special venues like Cinecon. The image is quite good. There is one slightly ragged patch around a reel change, where we get a spate of scratches, missing frames and an unsteady picture. A few other flaws intrude, but this is an exemplary transfer: quality B&W in HD looks great. The title has come out before on DVD, on an expensive Fox Murnau/Borzage disc set from back in 2008. 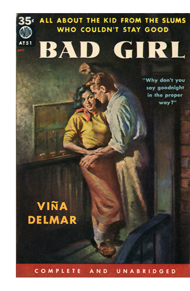 Kent Jones provides the audio commentary. He makes note of the popularity of Viña Delmar, the author of the original book. As I said, the film’s poster misrepresents the story just as does the cover of this reprint paperback (right). It looks like something that The Seven-Year Itch’s Tom Ewell would cook up for his exploitation publisher.

Jones tries to define the delicate respect for people that seems a given in Frank Borzage’s films. That quality is abundant in ’30s pictures by Gregory La Cava as well. In college I was a huge fan of Frank Capra, perhaps because I had read his autobio and his big pictures were easy to see. Now Capra’s show-biz artificiality often grates, as does the hyped emotions and rigged relationships in some of his pictures. It’s the little things. Capra’s ’30s scenarios after It Happened One Night invariably give us a few super-people — the stars — blessed with beauty and three-dimensional characterizations. There’s never a doubt that they’re superior to the fakes and phonies that oppose them, and that they will prevail because, gee whiz, you can’t keep good people down. There’s nothing intrinsically bad about that fantasy. But to make them seem smart, the stars are invariably surrounded by lesser beings, cute character actors that act funny or sentimental — but are mostly just amusing coloration. Capra’s beautifully made films were some of the most popular attractions of the late ’30s, but to me most of them play as simply false.

In Borzage’s Bad Girl and Man’s Castle, even the star players are caught up in life’s flow. They’re imperfect and make mistakes; none have a ticket to prevail with just a smile. The only transcendent value is in their love, which can reform a crook and show a cynic a better way to live. When I go for Capra, it’s got to be It’s a Wonderful Life or something early on, before he decided he had ‘important’ things to say. Borzage and La Cava pictures aren’t nearly as easy to see, but the ones I’ve seen combine a wonderful romanticism, with a sense of wisdom about real human relationships.