What is this? Sex-oriented movies with believable psychodramatics, made by a committed artist with taste and talent? Joe Sarno’s pictures still aren’t suitable for grandma, but he’s way, way above the exploitation grindhouse competition of his day. His ’60s B&W pictures are not only watchable, they’re involving. Restored to pre-print condition, they’re — how can I best put this? — artistically respectable. 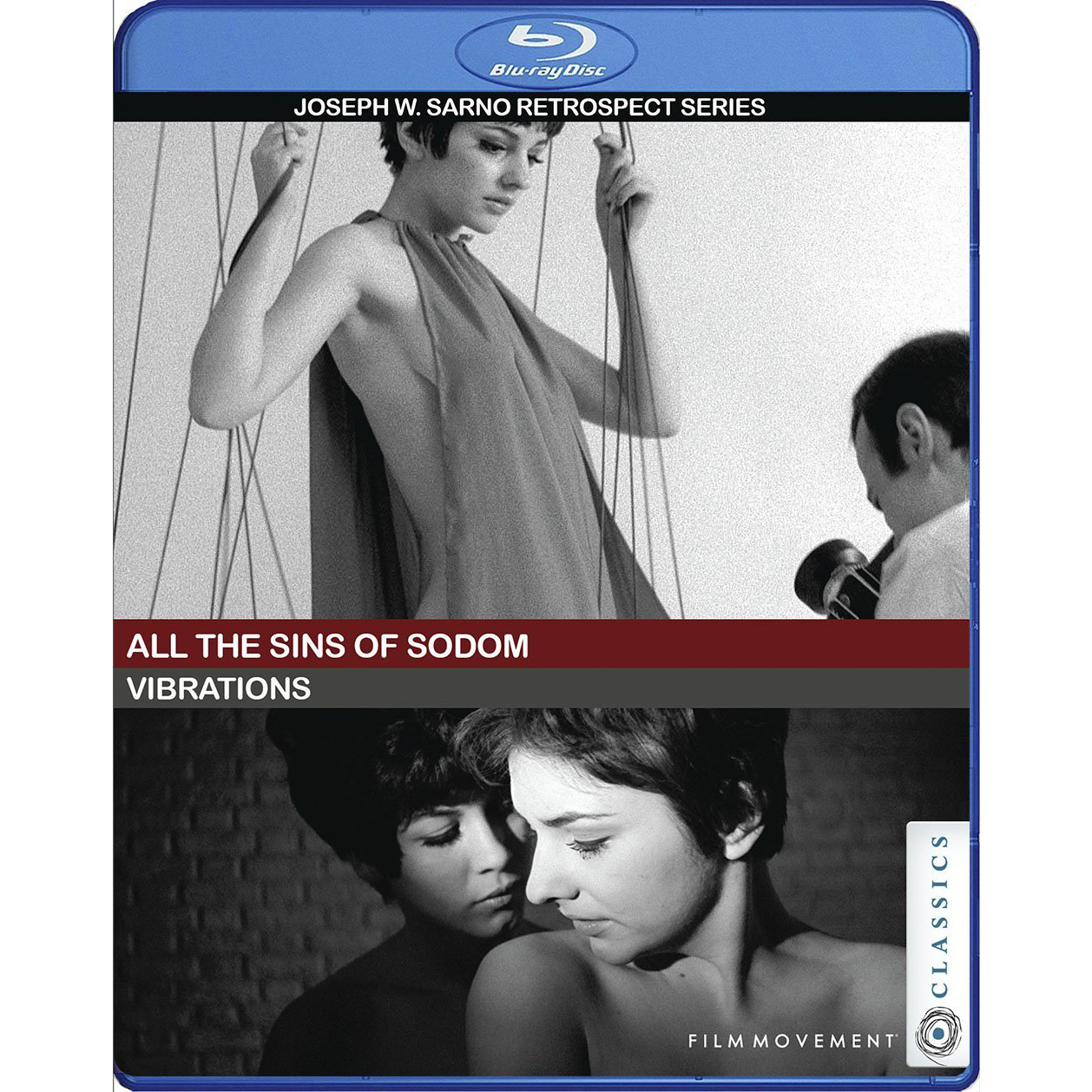 I know you’re anxious for this review column to get back to nice coverage of sweet, tender pictures like Kill, Baby, Kill! and City of Industry, but we’re taking a left-handed left turn to appreciate a cult cinema more maudit than maudit. Joe Sarno’s name wasn’t voiced in the company of respectable filmmaking for decades, not even after his coronation as a possible cult figure in the influential book Incredibly Strange Films. True, much of the ‘damned’ contents of that book are now popularly available, and considered tame compared to some of the fringes of today’s filmmaking. Context is everything. In the mid- 1960s, despite all the talk about freedom and openness, mainstream American movie screens were tightly restricted for content. But around the corner from the marquees announcing Mary Poppins (literally the case in my home town of San Bernardino) were theaters that played the movie equivalent of burlesque shows — lame comedies like Three Nuts in Search of a Bolt, which could have been re-titled, ‘seventy minutes in search of a thrill.’ Years before the hardcore revolution, soft-core porn-sters ground out nearly unwatchable pictures that had what the raincoat crown desired. Into this arena came Joe Sarno, a man with different ambitions. His pictures of the early ’60s, typified by the brooding Sin in the Suburbs, are coherent dramas set in a believable suburbia where suppressed eroticism burst forth in sordid rituals of wife-swapping, key parties, etc. Think The Ice Storm, but staged in a much less affluent setting. By the late ’60s and a return from some popular, moneymaking work in Sweden, Sarno found the backing to film three modest projects back to back in a still photographer’s studio. They’re Sarno’s concept from one end to the other. Still soft-core by definition — and with nearly wall-to-wall nudity — the two films’ theme and characterizations are as important as the sex content. And, though tightly restricted in every technical and production sense, Sarno generates his own very recognizable style.

All the Sins of Sodom uses the photo studio of the producer (who also plays a lecherous elevator operator) for what it is. A cameraman named Henning (Dan Machuen No — according to Tim Lucas, even this cast ID is bogus) sleeps with his models. He’s looking for a certain sensuous style or effect for a proposed photo book on the theme of Evil. His favored model Leslie (Maria Lease) is having trouble providing the vibe — she’s just too nice. To counteract Leslie’s good nature, Henning’s advisor and sometime model (Peggy Stephans) tells him that Joyce (Sue Akers), a homeless girl he’s allowing to sleep in the storeroom, has exactly the wanton quality he’s after. When Henning films Leslie and Joyce together, sparks fly. He begins to obtain the effect he wants even as the malevolent Joyce upsets the group’s emotional balance. There’s trouble ahead. Plainly speaking, All the Sins of Sodom first fulfills the ‘dirty movie’ requirement of plentiful nude scenes. The photo shoots are followed by Henning’s lovemaking sessions, while Joyce promotes her dark agenda by seducing Henning and more than one of his models. Sex is power, and although the dynamics here are tame compared to the frightening excesses of Yasujiro Masumura’s Manji, we recognize what’s going on as believable human behavior, something not normally seen in grind-house fare. Actually, I am told that Sarno’s pictures sometimes found their way into art houses, and that his name was considered a box office draw, for a specific crowd.

The acting is variable. All the performers seem fully committed to Sarno’s vision, as opposed to merely being willing to take off their clothes. Sue Akers’s line delivery is flat and false yet her character seems real. Her facial expressions communicate her pleasure in manipulating others. Peggy Stephans, the director’s wife, is a polished pro — we believe that she’s an honest collaborator with the photographer’s mission. The actor playing Henning is barely adequate, although he conveys well the idea that he has an artistic motivation for his sexy pictures. The visual trappings of the photo shoots are minimal, as the characters pose in front of a neutral backdrop. The setup with the cage made of strings looks forward to the kinky adventures of Sarno’s later pictures, but is the most complex scene in the film. Sarno talks about shooting in ‘limbo’ situations, where backgrounds are so minimal as to be non-existent. The actors’ heads and faces are the subject of most of the shots. Instead of cutaways, he shoots whole scenes in one take, and cuts to docu-like action on the streets outside to separate scenes. Either that, or he just hard-cuts to ‘later in the day.’ The dialogue and timing make this work. I believe I saw some dissolves but not more than a few.

Vibrations doesn’t have an ‘artistic’ context and instead relies on a kinky set of sexual relationships to stay in motion. This time around the same studio is redressed to appear to be two (window-less?) apartments. Both apartment doors really open into closets. Typist Barbara (Maria Lease) is inconvenienced when her ne’er do well sister Julia (Marianne Prevost, this time with a much bigger part) drops in to share her tiny Manhattan abode. Barbara is worried that sis will re-ignite an incestuous lesbian ‘thing’ they had as teens, something Barbara has been trying to put behind her. Julia becomes obsessed with a casual sex club operating next door: the voluptuous Georgia (stripper Rita Bennett) invites friends (Sue Akers and Dan Machuen) for threesomes, and the group easily enlists Julia as a new initiate.

With the sexual tension raised to delirious heights Barbara also becomes curious of Julia’s talk of ‘exquisite torture.’ Both sisters make it with one of Barbara’s writer clients. But is Julia being tempting disaster when she dares Barbara to join in on the revels? Where do these actors come from? The answer must be that they’re genuine adventurer nonconformists. We’re told that Rita Bennett was a pro stripper, and she plays that role in other films — eleven years later, she became ‘Miss 48’s’ in Scorsese’s Raging Bull. The others surely believed in the notion of sexual liberation — all seem committed and inspired by opportunity of Sarno’s film.

Part of my interest in these pictures comes from Wictor Ericsson’s documentary A Life in Dirty Movies, which tells the story of Joe Sarno and Peggy Stephans in very human terms — unlike shows about the likes of David F. Friedman, you don’t feel as if you’re in the presence of a huckster, a purveyor of slime. Sarno and Stephans chose their life and spent years making exactly the kind of movies they wanted to, until the realities of hardcore porn changed things. Friedman has the look of a happy procurer, who understands human motivation and has managed to monetize the sex impulse. Sarno never seems realistic about what he’s doing or aware what it costs — he’s just focused on his filmmaking. At this time, at least, he was the genuine sex pioneer that most critics didn’t believe existed. Is there even a category of ‘smut’ that can be called ‘legit smut?’ I don’t recommend using that defense against the angry mobs with torches.

Film Movement’s Blu-ray of All the Sins of Sodom + Vibrations is an immaculate transfer of two B&W features that we wouldn’t have believed survived all this time. The Something Weird logo tells us the probable source; it was a good day for American film history when Mike Vraney began buying up film materials scheduled to be junked by film labs and vaults going out of business. Any flaws present are so minor that I didn’t notice them. The widescreen images are clean and bright. The cameraman is identified as Peggy Stephans’ brother, and except for occasional focus issues it’s all good — it’s likely that producer and still photographer Morris Kaplan helped obtain the rich visual look. Let me backtrack by saying that some shots appear to be purposely out of focus for artistic effect. I’m remembering angles in a hallway, backlit.

Peggy Stephans-Sarno provides a full commentary for All the Sins of Sodom and a partial commentary for Vibrations, where she has a smaller and less effective part as a slovenly landlady. Tim Lucas gives us a full Vibrations commentary that’s a gem. Unlike this reviewer, Tim doesn’t feel the need to rationalize the existence of these pictures. He starts right in illuminating what’s unique and valuable about them. He’s said to have a Sarno book in the works, and if the information he’s compiled for this commentary is what can be expected, it might be a major work. The IMDB is wholly unreliable with movies like these, that don’t even carry full credits. I think I’ve got the character-actor correlations correct above, by ignoring what’s printed in the IMDB. Tim has much more vital information on everybody concerned, and not the list-of-credits kind of data that soon grows weary. His analysis of Sarno’s filmmaking style is illuminating, enough so to make us see the director as a unique kind of natural artist. It’s not intellectualizing the obvious. Sarno’s stories and themes are fairly straightforward, and his gift is for recording very special emotions and sensations. Tim also supplies the liner note essay for an insert pamphlet. Oh, I forgot, one detail about Vibrations that almost drove me crazy — Rita Bennett’s perpetually greasy, tangled hair. And I don’t even pay attention to things like that, normally. Oh, it’s distractingly anti-glamorous, but I still feel an impulse to dispatch some paramedics with a bottle of shampoo.