Aside from the obvious appeal of this smörgásbord of dirty movie delights, cult director Frank Henenlotter hosts a good history of soft-core film smut in all its forms. Includes excellent clips and input from one of the ‘greats’ in this field, David F. Friedman. Remember, it’s for educational purposes only.

Remember the beginning of the Paddy Chayefsky-Sidney Lumet film The Bachelor Party, in which a group of men in a darkened room are watching a film, and we don’t know what it is? That’s Sexploitation! is a comprehensive documentary about a sleazy, yet strangely innocent slice of prurient Americana. From VHS through the DVD days, the legendary Mike Vraney of the fringe video company Something Weird packaged delightful video compilations of old soft-core films. He acquired many of them by wholesale lots. When photochemical film labs closed down entire vaults of unclaimed film were slated for destruction. Vraney put out some genuinely rare items that attracted this reviewer, like Lionel Stander’s first film appearance after twelve years on the blacklist, The Moving Finger. But most of SW’s output consisted of pictures that showed only in disreputable grindhouses, the fleapits around the corner from the mainstream theaters, the ones frequented by lonely men and soldiers on leave. 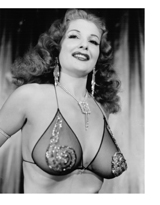 Before the video explosion we knew the kinds of films Vraney promoted only from publications like Incredibly Strange Films that talked up maudit film genres and filmmakers. The director of this film Frank Henenlotter had a chapter to himself in that seminal (ulp) book. This illustrated (is that a strong enough word?) overview charts the odd history of sexploitation movies from way back in the ‘twenties. The only precedent I know was in print. Older readers will remember the 1960s Playboy articles by Arthur Knight that sought to present an academic history of blue movies. 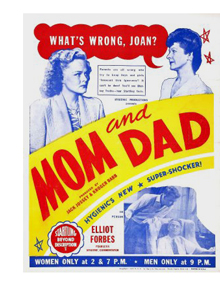 Producer Mike Vraney passed away in 2014. His compilation docu That’s Sexploitation! mines the best, or at least the most notable of films in the Something Weird collection. Frank Henelotter is the host but the show focuses on the famed showman David F. Friedman, who started in carnivals, worked for the studios for a while and eventually became a producer of disreputable but profitable adult entertainment. Friedman didn’t go for hardcore pictures with real sex but preferred prowl-by-night pictures that delivered, or promised to deliver thrills unavailable on legit theater screens. These filmmakers, distributors and exhibitors flourished in a cinematic gray area. Half smut peddlers and half carny operators, they made millions before the advent of blatant, show-it-all pornography. As Friedman explains, that’s when the fun went out of the game. Real porn slammed the door on the thrills of ‘naughty’ entertainment.

The show proceeds in basic chronological order, touching on novelty films of the silent era and covering scores of forbidden subgenres of nudie films. We even see samples of some ‘goona-goona’ movies, a rash of early-thirties fake documentaries about women raped by men in gorilla suits. My favorite are the fake cautionary films that grossly misrepresent the effects of marijuana. The result always seems to be a wild sex party, a favorite pastime of ’30s fringe filmmaking. A show called Tomorrow’s Children, represented by a mint-quality print, depicts its drug addict with extreme facial makeup that makes him look like a ghoul, or a vampire. Naturally, the moment the addict sees a nurse he tears her clothes off.

That happens a lot in That’s Sexploitation! 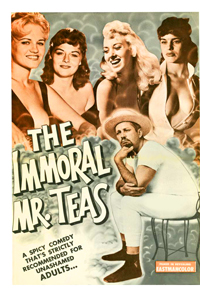 The show’s narration script sounds as if it could have been lifted directly from those Arthur Knight articles. David Friedman’s explains the evolution of sexploitation in full detail. We learn how the ’40 Thieves’ would hand-carry prints of one of their extravaganzas into a town, work up a sensational one- or two-day ad blitz, clean up and then move on. For the hygiene and live birth films they added a veneer of respectability by having separate shows for men and women. A live speaker pretending to be a doctor would sell cheap sex information pamphlets. Also nicely covered are the burlesque-sourced shows with baggy pants comics and famous strippers, like Belle Starr. As awful as the comedy is, the shows record what burlesque was really like: tacky. The docu takes a detour into the U.S. Army’s sex hygiene films made during the war. Graphic nudity and gross-out medical details seem very strange in this context. The images of various rotting body parts are clearly meant to frighten young conscripts from having sex.

I’ve read about the ’50s and ’60s sexploitation pictures but this is the first time I’ve seen most of them. A favorable court decision gave nudist films a boost; we even see clips from 1959’s The Naked Venus, Edgar G. Ulmer’s one foray into that genre. Russ Meyer then invented the ‘nudie cutie’ picture with The Immoral Mr. Teas. These infantile but amusing shows featured nudity but no contact between the figure models and the de-sexed male voyeur, a clear audience substitute. That trend was followed by the ‘roughies,’ pictures that linked sex to sordid violence. Doris Wishman is represented by one nudist picture but not her Chesty Morgan epics, while Bettie Page is seen only in a burlesque outtake. The docu stays with the more harmless pictures that exploit simple nudity and glamorous women — omitting less savory detours like Herschel Gordon Lewis’ gore pictures and Friedman’s own Nazi-sex movies. He produced some of those under a stage name, which shows where he drew the line. 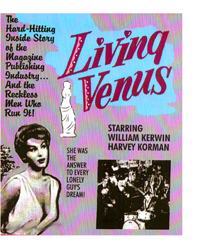 Most of the big names are covered: Dwain Esper, Kroger Babb, Barry Mahon, Joe Sarno, Doris Wishman, Bob Cresse, Dale Berry, Michael and Roberta Findlay. The draw will be the film clips, which are abundant, well chosen and in excellent condition. The new wraparound material consists of host Henenlotter paying a call on David Friedman, who maintains a museum of career souvenirs, the walls of which are covered with old posters of his various exploits. Lively and likeable, the aged Friedman doesn’t show his weakened condition. Like a carny hustler from the old days he’s proud of his profession and sees nothing wrong with courting a section of the audience outside the mainstream. Part of the wraparound was shot in a bar in the Bowery, with Henenlotter flanked by a naked bartender (Albert Cadabra) and burlesque stripper (Gal Friday). This show would seem to take its title from a 1973 compilation feature by Friedman called simply That’s Sexploitation without the question mark. But in the commentary we learn that the IMDB is wrong; that earlier film never existed.

Severin Films’ Blu-ray of That’s Sexploitation! delivers what the customer wants — its 136 minutes rounds up hundreds of salacious film clips that cover most of the relevant history quite well. The quality of the film clips and excerpts is very good throughout. The color clips improve on the sometimes-sickly hues seen in earlier DVD transfers. Most of what we see looks like native HD transfers, although some items may have been up-rezzed. What’s important is that all of it looks better than the older SW standard-def presentations. 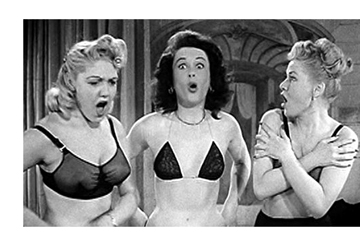 The disc carries a feature commentary from Henenlotter and Lisa Petrucci of Something Weird, who have no trouble filling the long-ish feature with interesting talk. They seem truly fascinated by the footage, and Ms. Petrucci remembers the names of many of the female performers. We hear a lot about Vraney and Henenlotter’s efforts to get Dave Friedman on camera; only on the third attempt was his health in good enough shape. They thought they might get five minutes’ worth with Friedman, and he talked happily for hours. Henenlotter and Petrucci talk about how Vraney would take trucks to labs that were closing, and were willing to let them haul away as much abandoned film as they could carry. Even when the truck was full, Henenlotter would keep seeing things they ‘had’ to have. Often a film would come with no credits and no information, yet when they asked Dave Friedman about it he’d remember what it was.

It takes two text pages to index the disc’s video extras, over 3 hours of short subjects from the Something Weird vaults. The choice runs from Barry Mahon strip shows to nudist shorts. I see Michael Findlay and Joe Sarno represented as well.

I met Mike Vraney briefly around 2000, when Gary Teetzel took me to a fan convention at the Hollywood Roosevelt Hotel. We had a nice talk with actor Joe Turkel, and then Mark Walkow, at that time with Image, introduced us to Mike at his booth. All went well until Mark told him that I reviewed movies online. Vraney apparently didn’t go online himself, but had heard about the rude fanboys that dissed his product for all the wrong, misinformed reasons. So my experience with Vraney was a harsh lecture. But that was apparently not typical for him. I think it’s a good thing that Vraney, through commercial means, managed to salvage and take care of films that could otherwise have become landfill.

See also my reviews for the older docus Mau Mau Sex Sex (no kidding) and A Life in Dirty Movies, the Joe Sarno story.