Pedro Almodóvar’s challenging films shouldn’t be only for his dedicated fans: nobody mixes genuine human compassion with world-class filmmaking as well as he … while maintaining a marvelous sense of humor, of human proportion. This 1999 effort is perhaps Pedro’s strongest drama, and yet another heartfelt endorsement of womankind. For the life-beleaguered Manuela, tragedy and melodramatic setbacks only bring out a primal determination to heal all wounds. My descriptions of this movie can’t convey what a warm, moving, and even funny experience it is. It really captures something. This Spanish director tends to shock American audiences unprepared for his embrace of vulnerable, imperfect people caught up in the modern age of gender issues, with complexities that too many of us refuse to acknowledge.

Criterion continues to circle the great works of Pedro Almodóvar, picking off another classic every three years or so. We’ve already been given Collection discs of the serio-comedy farces ¡Átame! and Women on the Verge of a Nervous Breakdown, but now arrives what might be el director de cine’s most affecting serious drama, All About My Mother. The volatile script wouldn’t have been green-lit by a U.S. studio, due to subject matter that (gasp) might offend somebody. Its subject matter dives head-first into tragic death, drug addiction, and AIDS transmission; Almodóvar gives us not one but two transsexuals. Nothing outrageous is depicted: the movie is about emotional interaction, not sensation.

Three separate males named Estaban enter into the storyline, but the show’s concern is how women run their affairs, holding together a semblance of family in the strangest of circumstances. I haven’t seen anything as dramatically compelling about our new world of plastic sexual identity, where people physically reinvent themselves and then must deal with a world where the old rules deny their humanity. Just as we expect, Pedro aim is not to explain but to empathize. There is no ‘shocking’ content here, at least not for viewers that prioritize human values ahead of outdated prejudice and superstition.

But don’t think for a minute that Almodóvar’s individual viewpoint will follow a Politically-Correct agenda. I delight when his eccentric take on relationships upsets people seeking to enforce hard-&-fast pre-set codes of acceptability.

Once again, Almodóvar’s main title designs are the best on-screen. The director envisions his women-centric world through his own cinematic prism, the one obsessed with color arranged for maximum graphic appeal. Yes, it has the Douglas Sirk cartoon clarity of images in old women’s magazines. But Almodóvar’s stories are less schematic than Sirk’s soapy work from the ‘fifties. From his The Flower of My Secret come the actor Marisa Paredes and the story springboard of a death associated with an organ donation. The idea that a heart can be transplanted applies to the emotional lives of Almodóvar’s women. In the idealistic situations presented here, suffering, love and strength flows between friends, forming a sister-family of trust.

(Caution Spoilers at Play.) Nurse Manuela (Cecelia Roth) works at an organ transplant center. She indulges her 17 year-old son Esteban (Eloy Azorin). He wants to be a writer and idolizes actress Huma Rojo (Marisa Paredes), who is performing in a production of A Streetcar Named Desire. Tragedy strikes after a performance, when Esteban tries to get Huma’s autograph on the street. Manuela regroups by returning to Barcelona, to find the father Esteban never knew. She connects with her old friend Agrado (Antonia San Juan), a transgender sex worker. Agrado introduces Manuela to Hermana Rosa (Penélope Cruz), a nun who does social work among the sex workers. Relationships soon become tangled. Huma Rojo is performing in town, and when Manuela tells her how she is related to Estaban’s death, she’s recruited to help Huma deal with her lover/co-star Nina (Candela Peña), a drug addict. One night when Nina is incapacitated, Manuela ends up taking her place, a happening echoed in references to Joe Mankiewicz’s All About Eve. Agrado enters Huma Rojo’s circle as well.

(Even more serious Spoilers this paragraph.) But every upturn has a dark side. Agrado tries to get Manuela a job working for Rosa’s mother (Rosa Maria Sardá), who needs help taking care of Rosa’s Alzheimer’s- stricken father. That doesn’t work out, but Manuela becomes an essential comfort and help to Hermana Rosa, who develops a doubly-terrible problem. She’s pregnant, and has also contracted AIDS from a one-time-only lover. Rosa’s conservative mother never approved of her social work, and is incapable of understanding anything about her predicament. The kicker is that Rosa’s lover is the same person that fathered Manuela’s baby 18 years before. He’s a transsexual now known as Lola (Toni Cantó) — and he’s dying of AIDS as well. 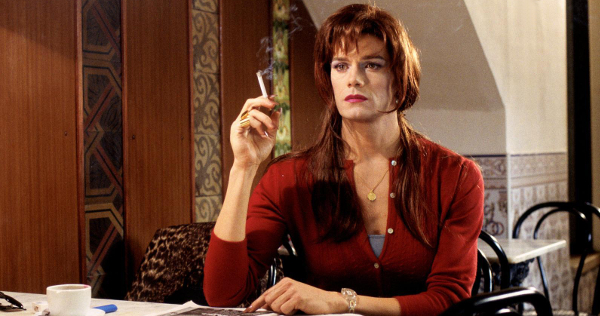 With all these bizarre and grim events coming down, the fascinating thing about All About My Mother is that it’s a positive story fundamentally concerned with life and hope. Manuela is the soul of womanly strength, which is not the same as power. She’s resilient and enduring and open to deal with whatever problems come down the road. Almodóvar takes on her story as if it were a lesson from a Bible serving as a guide to foster human understanding. Manuela isn’t afraid of her own past life on the streets. She’s patient and flexible when confronted with conflicting mindsets. She soon forms a bond with the actress Huma Rojo, based on trust, not an Eve Harrington-like parasitism. She’s gentle with Rosa’s limited, uncomprehending mother.

The colorful supporting characters are not played as clowns. Agrado at first seems a basket case, being beaten bloody by a customer out on the road, like Giulieta Masina’s Cabiria. Agrado is sassy and streetwise (Spanish speakers, get ready for more arcane street argot) but as solid a citizen as Manuela, the trained nurse. Both the famous actress Huma Rojo and the respected nun Rosa turn out to be needy individuals. Huma feels she’s losing her grip on her life. Poor Rosa has made an awful error, for which she is paying a horribly disproportionate penalty.

Through all of this havoc the characters maintain their sanity with humor, and the rough grace that comes with coping with adversity. Not all survive but those that do regroup in new life relationships. Males stand outside the emotional mainstream. These women are still dedicated to their boys, but the men we see are weaker, less responsible creatures. An actor just wants sex, Lola is a walking menace, and Rosa’s father is a near vegetable. Still, Manuela welcomes the chance to raise a third Esteban.

What will straights or conservatives make of All About My Mother?  Who cares?  I was certainly puzzled with parts of the show in 1999, and I’ve still never had to deal directly with the issue of transsexualism, but Almodóvar’s philosophy of acceptance seems like a good thing. The show is a worthy reminder to avoid taking anyone for granted — many people have complicated lives, and we’re living in a culture storm of intolerance. Sure, when Lola finally makes an appearance, I’m extremely wary… but not with the same dread of Hermana Rosa’s mother, who says out loud that the transsexual is some kind of monster. The women is afraid that her daughter’s baby is going to give her AIDS.

Pedro Almodóvar is never going to be for all tastes. Women on the Verge is no more ‘out there’ than a Doris Day movie, yet I’ve met people that think it too perverse. Why are some of us allergic to any movie by foreigners, spoken in a different language?  All About My Mother may be the director’s best litmus test for social tolerance — the principled Manuela is a conduit for compassionate understanding.

Pedro’s heavy drama here is just as liberating as his somewhat lighter delights, like Volver. I do have to say that he makes a more profound impression when concentrating on women. His only film that I’ve so far seen that didn’t appeal is his horror item The Skin I Live In. Despite carrying the physical transformation aspect of transsexualism to a logical end, to me it felt too much akin to crazy Franju nightmares, and not enough about relatable human problems. But that’s just me. All About My Mother is a great, great picture, an island of humanity in a cold movie landscape.

The Criterion Collection’s Blu-ray of All About My Mother is another fully restored beauty that surpasses the decent DVD release from Sony. The new 2K restoration is approved by Pedro Almodóvar.

As with their earlier Almodóvar releases, Criterion has included a full battery of extras. A longform making-of docu, a TV interview program and a new post-screening discussion taped in Madrid feature the director, his producer-brother, and several of his top actors and collaborators.

Emma Wilson handles the main essay in Criterion’s insert booklet, proposing multiple theories with the film’s self-reflexive structures, even the suggestion that the aspiring writer Esteban might be imagining the entire story as an ode to his mother Manuela. The Blu-ray contains a 32-page book that adds an interview with Pedro Almodóvar and his written tribute to his mother.

The great disc cover art — it captures the Spaniard’s stylishness — is by the artist Petra Eriksson. Criterion’s disc producer is Susan Arosteguy.