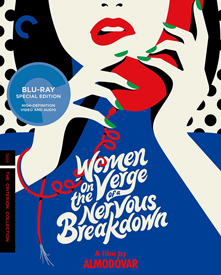 Connected film festival attendees learned about Pedro Almodóvar before everybody else, especially if they had an understanding of new developments in Spanish cinema. Film school had shown us nothing but the very exceptional work of Luis Buñuel, most of which is really from Mexico and France. In the 1980s we Angelenos were just getting access to films by the old-school ‘traditional’ rebel Spaniards Carlos Saura and Juan Antonio Bardem. Saura really didn’t make a noise here until his popular flamenco-themed movies arrived. And then there is the remarkable Luis García Berlanga, who comes off as a more humanist yet equally unsentimental Buñuel. 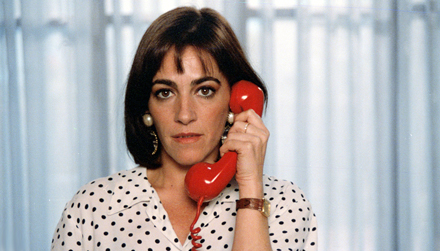 No, most of us didn’t discover Pedro Almodóvar until the 1988 arrival of Women on the Verge of a Nervous Breakdown, a delightfully glossy comedy that put an exciting new face on the previously gloomy city of Madrid. Thanks to the insular American culture, the last we had heard of Spain were jokes on Saturday Night Live about Generalissimo Franco ‘still being dead.’ What we didn’t know is that, at least in the big cities, a cultural revolution had occurred. Fascist Spain had officially gone socialist just a few years after Franco’s demise. Almodóvar’s earlier, sometimes sketchy films had delved into content unthinkable under Franco — transvestism, gay culture, a sick serial killer even more disturbing than those found in Italian Giallo pictures. Women on the Verge went in an entirely new, lighter direction that all but guaranteed international interest. Madrid was suddenly a fun place, and no longer a battleground in Hemingway stories.

At first blush Women on the Verge resembles some kind of mutated Doris Day picture, filtered through a new-age consciousness. Produced with a proper budget, Almodóvar’s picture sports clever design schemes that are more than just decorative. The characters express a new civic freedom — people ride skateboards in the beautiful Madrid streets. Almodóvar peppers his picture with brilliant, unfamiliar content. The lyrics of a soap-operatic Mexican ballad called “Soy Infeliz” (‘I’m Unhappy’) moan and groan over the smart graphics of the title sequence. 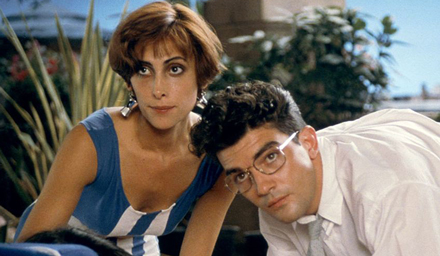 Inspired by Jean Cocteau’s old standby dramatic piece La Voix Humaine, Women on the Verge gives us the romantic travails of actress Pepa (Carmen Maura of Almodóvar’s ¿Que he hecho yo para merecer esto?), who is desperately trying to contact her longtime lover Iván (Fernando Guillén), with whom she works dubbing movies and commercials. A real bastard, Iván has not only deserted his wife Lucia (Julieta Serrano), he is now ditching Pepa to run off with a third woman. Pepa is going crazy over missed phone calls and frustrating recorded messages, all of which seem designed by Iván to avoid a direct exchange of words. She’s so distraught that she considers selling her beautiful balcony apartment. She also prepares a pitcher of Gazpacho laced with sleeping pills, but is too busy contending with other emergencies to actually commit suicide. Lucia is prowling around, convinced that her husband is preparing to run away with Pepa on a plane to Stockholm. She is an ex- mental patient, and dangerously irrational. Pepa’s best friend, the high-strung Candela (María Barranco) is in a desperate panic for Pepa’s advice and protection. She’s just discovered that her last romantic pickup was a Shiite terrorist, now on the government’s most-wanted list. Candela shows up at the terrace apartment just as Pepa accidentally sets her bed on fire, a suitable symbol for the state of her love life. Then arrive Lucia’s handsome son Carlos (Antonio Banderas) and his fianceé Marisa (Rossy de Palma). Carlos is fascinated by Pepa, and Pepa is charmed to meet her lover’s son. Marisa is not amused by what seems an immediate attraction between Carlos and Candela. A pair of detectives gets involved, and so does Paulina Morales (Kiti Manver), the lawyer that Pepa finds to advise Candela… and who is also coincidentally involved in Pepa’s personal troubles. Various people are drugged, an incredibly handy taxi driver (Guillermo Montesinos) keeps coming to Pepa’s rescue, and the finale is a bizarre race to the airport. 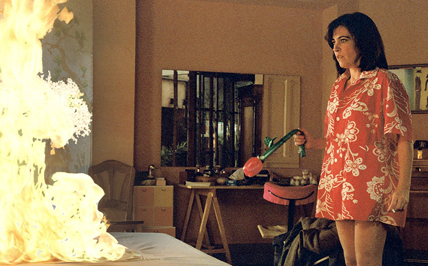 That synopsis can’t convey all the great things in Women on the Verge of a Nervous Breakdown, which offers visual surprises, cultural revelations and stylistic excitement in every scene. Within a fairly realistic framework, Pedro Almodóvar opts for many formal detours, as when we suddenly cut to an abstract, B&W shot of Iván accosting various women with silly Spanish piropos, in an expression of the cultural Don Juanism that seems the Iberian norm. Almodóvar’ frequently incorporates borrowed themes from plays and movies, as when his film Matador references clips from Mario Bava’s Blood and Black Lace. Forget the empty copycat adulation of Brian De Palma: Women on the Verge makes a brilliant direct use of a scene from Nicholas Ray’s Johnny Guitar. First Iván dubs the voice of Sterling Hayden into Spanish, and then Pepa comes to a different recording session to dub Joan Crawford. The scene is a key romantic clash that crystallizes the tension between a proud man begging forgiveness and a woman scorched by never-ending male betrayals. Almodóvar films it beautifully, allowing us to see the scene’s relevance to Pepa’s romantic suffering.

It’s not easy to communicate the tone humor involved — this show should appeal to people who like Billy Wilder, Preston Sturges with a little Frank Tashlin thrown in. Pedro Almodóvar’s take on the world is totally unique, something even Spaniards had to grow into. The characters are a delight, from the chattering receptionist (Loles León) at the recording studio to the concierge (Chus Lampreave) that mans the entrance to her apartment building. She’s forever saying that as a Jehovah’s Witness, she can’t lie — so she just doesn’t tell people things they need to know. The eccentric, wonderfully accommodating taxi driver can dish up any music a client desires, as well as scores of drug store amenities. This save’s Pepa’s eyeballs when her face is doused in spicy, salty Gazpacho… a torture Torquemada never thought of.

Thoroughly modern Madrileña Carmen Maura is a marvelous heroine on this adventure into withstanding the tortures inflicted by Spanish males. Julieta Serrano makes a compelling abandoned madwoman, a comic character that nevertheless reverberates in Latin culture, where women deserted by husbands or lovers sometimes become religious beatas or lose their marbles altogether. Other female characters endure similar grief with men. María Barranco is at the mercy of her own easily swayed heart — she lets herself be tricked by a terrorist, and while grieving responds to the overtures of a new boyfriend, right in front of his fiance&eacute.

The actor most known is of course the 27 year-old Antonio Banderas, who is not yet buffed out for American action films. Already an Almodóvar veteran, Banderas is here a deceptively passive fellow, a date-bait sweetheart who is also a chip off the old block, a potential Don Juan like his father.

Perhaps the most extraordinary actress on view is Rossy de Palma, whose unique face resembles a Picasso sketch (no kidding) and becomes extraordinarily beautiful after about five seconds’ worth of observation… it’s indeed as if she were designed by an artist. True to Almodóvar’s own big heart, de Palma begins the show as a humorless stiff, yet is soon admitted into the circle of beloved characters. Te director’s strong suit, made even more emphatic in later pictures like All About My Mother, is his deep compassion for all of his characters. Unlike the cinema circus of Federico Fellini, his gallery of eccentrics are not a menagerie of grotesques. Almodóvar’s emotions are empathetic… they go outward, not inward.

Almodóvar salts crazy faux-commercials into some of his films, and in this case they come in the form of things being dubbed at the recording house. During a wedding ceremony, the priest slips a new bride a forbidden object, saying that with men one can never be too careful. A laundry detergent saves the day for the mother of the ‘Crossroads Killer’, as its super enzymes remove all traces of blood from murder evidence. Other peculiarities wait for discovery by individual viewers.

No spoilers here. Let me just shout out that you don’t want to miss the final soundtrack song Teatro, sung by the Cuban diva La Lupe. It’s an incredible choice for the film’s theme, as it’s a woman’s cry of protest against the eternal male, who uses lies, deceit and bids for sympathy to control and betray. The Spanish lyrics, using theatrical terminology, are wickedly accurate: “Igual que en un escenario, finges tu dolor barato / Tu drama no es necesario, ya conozco ese teatro.” (‘Just as in a scenario, you act out your fake pain. Your performance isn’t needed, as I’m already familiar with your cheap tricks.’) La Lupe really belts out the song. It’s a fantastic thing for Spanish students to hear… the woman rolls a mean ‘r.’

The Criterion Collection’s Blu-ray of Women on the Verge of a Nervous Breakdown is a marvelous disc. Earlier DVDs were okay but this is the first encoding I’ve seen that really nails the film’s bright colors and textures. Like an audiovisual bomb, everything we see seems sourced from a refreshingly cool alternate universe of creativity. Pedro Almodóvar expresses character through costume, and the film’s clothing is a treat in itself. Even the earrings have something to say, as when Candela enters sporting a miniature espresso maker on each ear lobe. Almodóvar would occasionally return to dark themes, but even with its emphasis on male depredation, this picture is all bright promise and romantic possibilities. 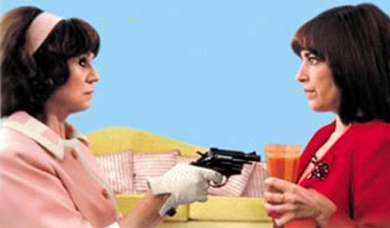 The beautifully mixed original audio is in 2.0 stereo, with an added 5.1 remix, only on the Blu-ray edition. I never mention it anymore, but all Criterion titles are released in DVD as well.

A big boost to enjoyment is four new featurettes. The articulate and candid director talks about what Mujeres means to him and how it changed his fortunes as an international film personality. His producer-brother Augustín adds more background about how the films came to be. The charming Carmen Maura goes over her career, her start with Almodóvar in theater, and their collaboration on some very weird characterizations. Video essayist Richard Peña places the picture in the context of international exhibition, showing how Mujeres encapsuled Almodóvar’s vision of a new Spain, the country’s new idea of itself.

A trailer finishes off the video extras. Essayist Elvira Lindo was a Spanish TV personality before becoming a writer; her insert essay begins with an illuminating discussion of the changes that came about after the fall of Fascism — Madrid became wilder and perhaps less safe, but free of political repression.

Hopefully Women on the Verge of a Nervous Breakdown will just be the first of many Criterion Almodóvar discs.