This remake of a pre-Code classic adds amazing European locations, glorious Technicolor and entire armies on the move, yet doesn’t improve on the original. Producer David O. Selznick secured Rock Hudson to play opposite Jennifer Jones, but the chemistry is lacking. Why did the man spend twenty years trying to top Gone With the Wind? 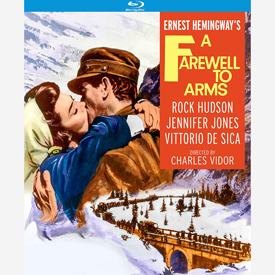 What happens when a major Hollywood producer thinks he has all the answers? David O. Selznick’s final production was criticized from the moment it appeared. It is yet another attempt to cast his lover (now wife) Jennifer Jones in a classic epic intended to sweep the Oscars and place him atop the Hollywood heap one more time. The Academy has a way of punishing its own but Selznick’s hauteur and imperious attitude with talent and collaborators is what really sunk the picture; the only nomination it received is for Vittorio De Sica’s frankly terrible supporting performance. You can almost hear the groans as the words of the title slowly crawl across the screen, Gone With the Wind– style. It’s the sign that Selznick is looking backward for glory instead of forward to a new challenge.

Is A Farewell to Arms a bad movie? Not really, until one sees how the gigantic production overwhelms what is really a simple love story between two people. Vast armies move and entire towns are transformed to recreate Northern Italy in WW1, and we have almost no emotional reaction to any of it. It’s a curious mix of filmmaking out of touch with the times and a producer who thinks he has unbeatable formulas for casting and story. Jennifer Jones is simply too old for the role. She has zero screen chemistry with Rock Hudson, who doesn’t even seem to be in the same picture.

The story is unchanged from the Hemingway book and the first movie version. WW1 American volunteer ambulance driver Lieutenant Frederick Henry (Rock Hudson) falls in love with English nurse volunteer Catherine Barkley (Jennifer Jones). They continue their forbidden affair in Milan when Frederick is wounded on the Italian front. Catherine gets pregnant but doesn’t push Henry to marry her. Head nurse Miss Van Campen (Mercedes McCambridge) finds out about their fraternization and sends him back to the front, while Catherine relocates closer to the Swiss border to have her baby. Fred deserts after witnessing some unjust executions, and rushes to be with her.

Seeing this movie increased my appreciation for the 1932 version with Helen Hayes and Gary Cooper. That B&W show now seems an even greater classic, despite its partial censorship and romantic overstatement. Selznick’s overproduced epic is filmed on authentic locations with an enormous technical outlay that can be seen in the vast mountain-scapes of marching men and materiel. But that’s just hardware. Most of the scenes between the lovers take place in fairly ordinary hospital rooms.

Then there’s the glamour problem. Fugitives from the Army and the war, Jones and Hudson relax by a Tyrolean lake dressed in new clothing, like rich tourists. They don’t seem to have the slightest problem with money. It reminds me of Selznick’s late ’30s drama about a troubled marriage, Made for Each Other. With the Great Depression still a reality, Carole Lombard and Jimmy Stewart’s pressing ‘money crisis’ boils down to being too proud to ask daddy for a loan. They spend their miserable, downcast New Years in a swank Manhattan apartment, and have no fun at all in their formal wear at a ritzy night club. All of America can relate to that.

Stage legend Helen Hayes had a spotty film career but was far more believable as an embittered nurse reenergized by Gary Cooper’s love. We know that Jennifer Jones is capable of jettisoning her movie star persona, as was seen to good effect in (the English version of) Michael Powell’s Gone to Earth.  She can play just about anything and often shines, whether on her own or under the supervision of her husband. But David O. had become the kind of producer who believes that he is the star, that audiences will flock to theaters at the mention of his name. Selznick’s narrow tastes and constant  interference ruined some of Jones’ later vehicles, like Indiscretion of an American Wife. His heavy handprints are all over this show. It’s too glossy, too pretty, and far too oversimplified. Poor nurse Mercedes McCambridge is a one-note martinet who can’t handle the threat of Jones’ sexual freedom. Vittorio De Sica makes lame humanistic speeches about a war that seems an irrelevant inconvenience to the plot. What’s a lieutenant doing driving an ambulance, anyway? The script tries to inject some comedy by having a pair of lunatic Italian first aid drivers manhandle the wounded Hudson like he was in a Laurel & Hardy movie. It all just sits there.

The original version presented Hudson’s desertion and frantic flight to Switzerland in heavy melodramatic terms that might not have played well in 1957. But it at least managed a feeling of desperation and doom. That the pair are unmarried lovers in a ‘thirties film made us expect a grim ending. The remake doesn’t seem to realize that audiences will be unimpressed by Jones and Hudson’s affair. No particular attitude is established about their status as free-spirit unmarried parents. When Jones says she doesn’t want marriage it doesn’t add up, but their dialogue is so generic that we barely listen to what they’re saying anyway. Both Jones and Hudson deliver rushed flowery speeches that should be accompanied by a title reading “Selznick Memo.” After two-point-five hours of bombast, the downbeat finale is as thin as that of the later Love Story. Love means the audience is supposed to care because the producer’s bankroll is on the line.

Selznick was an old-school gambler who put his own money and reputation behind his dreams, but in the final analysis what he believed in the most was his own greatness. A Farewell to Arms must have looked old-fashioned next to the 1957 blockbuster The Bridge on the River Kwai and the smart-money potboiler Peyton Place. 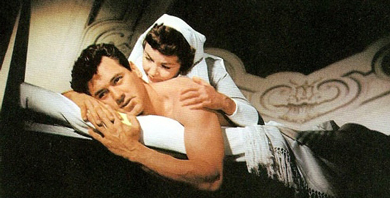 The KL Studio Classics Blu-ray of A Farewell to Arms is quite an improvement on the Fox disc from twelve years ago — all those beautiful Italian and alpine locations look terrific in HD. Mario Nascimbene’s film score is effective, even if it at times sounds thin, with a motif that seems borrowed from Miklos Rozsa.

The disc’s only extras are a selection of trailers from other movies, Amazon lists an audio commentary but none appears on the disc itself. We’re curious about the story we’ve heard that John Huston began the film but quit or was fired, and replaced by Charles Vidor. With Selznick in charge, the perfect director would be a speed-reader who could get through the constant producer quarterbacking and micromanaging.