Classic cinematics from first-rank filmmakers. No ballet or heroism, so not a crowd pleaser, but Michael Powell’s original version of Gone to Earth is another unique Archers creation. Jennifer Jones finally gets to chew on a character role with grit, as a natural virgin/vixen misunderstood by contrasting suitors. David O. Selznick’s revision The Wild Heart is a classic too — of unnecessary meddling. 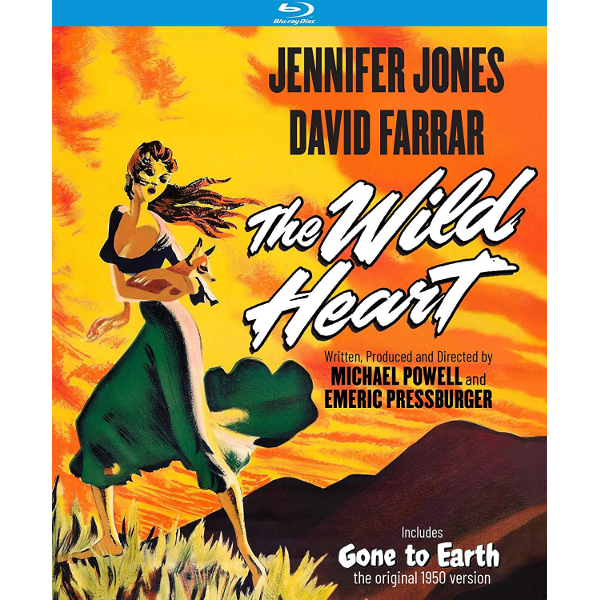 This is one beautiful production, one that will thrill Powell & Pressburger fans eager to see all of his films. With his typical cinematic simplicity, Michael Powell’s camera pulls meaning from images of landscapes and nature, expressing the natural urges that steer his heroine in directions not likely to be appreciated by the stuffy society of 1897. Jennifer Jones is a special creature here. Away from the strait-jacket direct influence of David O. Selznick, she creates a distinct character quite apart from her usual glamorous charmer. 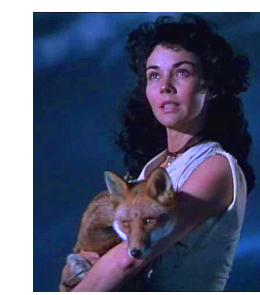 Jennifer Jones was a fine actress and a great beauty, but with a fitful career that bounced between worthy and unworthy projects. The main force in her film life was of course her agent-mogul second husband, and it’s toss-up whether his influence was good for her. It’s possible that Phylis Lee Isley wouldn’t have become a big star at all, as all but her earliest work came through the super-connected Selznick. But once Jennifer was established, the rabid control freak David O. conceived of her every film as some kind of temple to his adoration. Selznick prospered by contracting great talent and selling their services at inflated prices; as far as he was concerned he had all the answers about everything concerning film production. His infamous memos made it impossible for directors to direct, that’s well enough known, but even when Selznick leased out Jones for foreign producers, he tried to dictate how the movies should be made … mostly, to focus everything on her, as if she were a silent movie star.

With 1950’s Gone to Earth, the Michael Powell / Emeric Pressberger ‘Archers’ lept into full-scale romance mode, and naturally came up with something offbeat and brooding. Ms. Jones would have seemed perfect to play a rough country girl, living almost in the wild, who becomes the object of affection for two men in a bodice-ripping period drama. Selznick likely thought Hazel Woodus an extension of Jones’ fiery half-Mexican firecracker in Duel in the Sun, a mode she’d repeat in the painful near-parody Ruby Gentry.

Michael Powell was more interested in expressing the soul of England (as he saw it) than creating another excuse for a sexed-up costume picture; the Archers’ wartime movies transcended their time because they were about ideas behind the struggle — the English values Powell thought precious and worth protecting. Gone to Earth projects us into a particular place and time, where a ‘wild child’ might be suspended between nature and civilization. In another era Hazel Woodus might be burned as a witch. She follows the superstitions of her mother, a gypsy, and lives with a pet fox. Powell & Pressberger stress the elemental nature of the story. Their imagery is so adept, we don’t mind that Hazel is frequently visited by symbols of death, and equated with / compared to her pet fox. They are indeed a pair of wild vixens. The fox can’t be kept out of the henhouse and Hazel can’t be steered away from her passions, which are far from idyllic.

Hazel Woodus lives with her father (Esmond Knight), who makes coffins and plays the harp like an angel. She’s set up to be the bride for Edward Marston (Cyril Cusack), a passive, gentle Baptist minister whose love is almost completely on the ethereal plane. The landed Squire Jack Reddin at first takes Hazel for a hopelessly crude peasant that might make a good roll in the hay, if first boiled clean. He’s surprised to discover that she’s become a love obsession. Reddin subscribes to the Brit equivalent of droit de Signeur, but his timing is lousy.

In addition to their obsessions, neither man realizes that Hazel is not willful, but passive. It’s not difficult to frame the entire tale with the theme of female subjugation. She uses her mother’s charms to make decisions, essentially surrendering to a mystical fate. She makes an unfortunate ‘oath to the mountain’ that determines who she should marry, and another pagan ritual determines who she sleeps with. The ‘power’ she has over these men is a destructive illusion. Squire Reddin is nobody’s idea of Prince Charming and his struggle to tame Hazel might as well be a fox hunt. Instead of blossoming into a social creature, as is the norm for ‘wild child’ women in romance novels, Hazel remains a wild creature, who will wear another woman’s fancy dress but prefers to run through the hills barefoot. She doesn’t rise in station. She isn’t presented at a formal gala and isn’t taken to London. One man puts her on too high a pedestal, and another doesn’t mind destroying her reputation… the story resolves as a tragedy. Those decisions probably harmed the film’s commercial prospects, despite the beautiful imagery in the West-England forests near the border of Wales. Gone to Earth isn’t a ‘fun’ picture, nor a wish-fulfillment fantasy. It’s more downbeat than, say, the Schlesinger version of Far from the Madding Crowd. Selznick’s frivolous, lazy Duel in the Sun glamorized and fantasized the sordid story of a young girl caught up in the desires of men; Powell goes straight to the truth of what such relationships are like.

Everybody seems to have an opinion on the matter, but Hazel seems driven more by fate than anything else. The story’s unforgettably dark, blunt conclusion surely didn’t send viewers out smiling, even if it fully satisfies fans of Powell & Pressburger — this pair never made a dull movie.

As I said above, Jennifer Jones is radiant here in a new, rough-hewn guise. Hazel has beauty close-ups, but Christopher Challis doesn’t bring in ridiculous unnatural lighting schemes or soft focus, to isolate her beauty; we love Portrait of Jennie, but after a while it becomes a series of beauty portraits with a DeBussy accompaniment. In Gone to Earth Hazel’s hair is often as unruly as a bird’s nest. She scratches her cheek while singing, a gesture that Selznick can’t have liked.

David Farrar might have become a major romantic star had he not played so many conflicted, often unpleasant, characters. His masterful mountain expert in Black Narcissus, for example, can offer no solutions for the Holy women that come in contact with him. Squire Reddin is basically an arrogant cad, a peer all but above the law. He initially considers Hazel just more prey for his hunt, and would like nothing more than to keep her as a back door mistress. We can’t believe he could be true to Hazel in the long run.

Cyril Cusack’s Edward, sadly, makes a compact with God that undermines his own marriage, putting himself in the same unnecessary position as Robert Mitchum’s schoolteacher in Ryan’s Daughter. The minister is not a fool, only innocent. He’s sensitive enough not to simply blame everything on Hazel’s pagan charms, yet he also defaults to spiritualism instead of simply talking to the girl. The tragedy is that Edward only briefly gets a chance to redeem himself. He’s a rare ‘good Christian’ character who isn’t unduly blamed for everything.

Edward Chapman (Things to Come) is a convincingly honest prig, and the wonderful Esmond Knight, who was functionally blind, once again convinces us that he’s sighted. The scenes where old Woodus plays the harp while his daughter sings are quite beautiful. Sybil Thorndyke is minister Edward’s mother, whose reaction to Hazel’s weakness is predictable. The winner in the supporting ranks is an unexpectedly thin Hugh Griffith, the Squire’s marvelously mutinous servant, guardian of Hazel’s virginity, etc.. Watching Griffith, it only now strikes me that he must have been the model for a puppet characters in the Anderson Supermarionation movies.

David O. Selznick often exerted behind-the-scenes influence on movies using his stable of talent. He was an executive producer on several foreign pictures. He was in on the production of The Third Man partly because Carol Reed hired two of his contractees, but DOS’ meddling was reportedly limited to changing the opening narration. On both Gone to Earth and Vittorio De Sica’s Stazione Termini he injected himself deep into the filmmaking process. In each case, after (probably) warping the foreign director’s vision, he re-edited both films for America, and in the case of Gone to Earth essentially made his own version. When he discovered that he could do what he wanted with the American release, he went full ‘movie doctor’ mad on Powell’s picture, jettisoning a third of the footage (‘dull stuff’) and hiring Rouben Mamoulian to do retakes.

In the case of the De Sica picture, I avoided Selznick’s Indiscretion of an American Wife and only caught up with the Italian original on an early Criterion disc. With Gone to Earth, we didn’t have access to the original picture until an early Region 2 DVD (made possible by the gift of my first all-region DVD player by a close friend). I’d seen Selznick’s cut, The Wild Heart on the old ‘Z’ Channel and was unmoved. With the original, we can now at least know what we’re looking at. I think that Gone to Earth is in the same league as the Archers’ more famous productions. It’s still a fine and absorbing drama.

KL Studio Classics Blu-ray gives us Gone to Earth / The Wild Heart as separate encodings on one disc. The lawyers have apparently decided that ‘The Wild Heart’ is the official version, even though it’s not even recommended, except as evidence of producer tampering. The masterful original Gone to Earth is included as an ‘extra.’

Happily, both versions appear to be of equal quality. The movie was originally filmed in 3-Strip Technicolor. The encoding was made from a high-quality Eastman composite negative, made from the Technicolor separations. The quality is mostly excellent. Optical sections — scenes with dissolves, mostly, are of higher contrast and slightly less attractive. A couple of shots pop up looking a little greener than they should.

The alignment of the three color registers is mostly good, but one of the first shots up shows a good example of fringing: a silhouetted rock bears a red outline on the left, and a slight green outline on the right.

The The Wild Heart version has David O. Selznick’s ‘tradition of quality’ BS all over it. He’s added an overture (it’s important, ya know), dropped fellow executive producer Korda from the title sequence and added a pretentious opening narration by Joseph Cotten — perhaps charging Cotten’s time to the production, and Korda too?   It’s called a Roadshow edition, but it wasn’t a success in the states when distributed by Selznick in 1952.

The disc has no lack of commentaries, with the well-informed Samm Deighan weighing in on the original film, and Troy Howarth explaining how Selznick altered his far shorter recut of the sorry tale of Hazel Woodus.