The Audubon Society battles plumage poachers in the Everglades, circa 1900. Legendary director Nicholas Ray suffered an on-location meltdown filming this early ecologically sensitive epic, but the finished product is still one of his better pictures. Burl Ives, Christopher Plummer and Chana Eden give top ‘Ray’ performances. The eccentric supporting cast includes Peter Falk, boxer Two-Ton Tony Galento and none other than the real Gypsy Rose Lee. 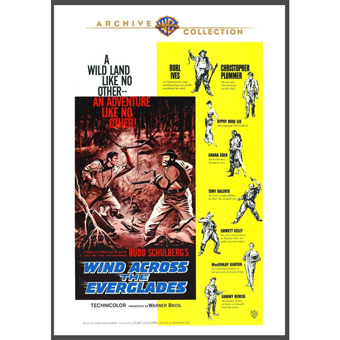 A fascinating picture in every respect, Nicholas Ray and Budd Schulberg’s Wind Across the Everglades is one of those production disasters that bleeds brilliance in all directions. In just ten years, the intensely creative, instinctual Hollywood director Nicholas Ray had made an admirable string of fine movies. His previous picture Bitter Victory was a battle between producer and a director who was beginning to crumble under the pressure of his habits — gambling, drinking, drugs. Recommended to producer-writer Budd Schulberg by Elia Kazan, Ray showed up for work in terrible shape. He established no rapport with his crew and spent all of his time with a French woman he’d brought back from North Africa. 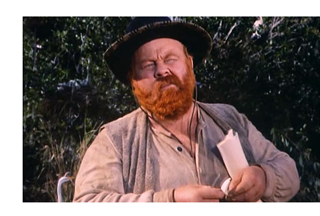 The shooting was a mess, with Ray not communicating with his leading player, Christopher Plummer. Shulberg and others directed the ending of the movie after Ray rebelled/withdrew/was dropped from the shoot. The amazing thing is that with all its problems the final film ‘feels’ like a Nicholas Ray picture, in the intimacy of its drama and the naturalness of the performances. We liked it in college. A decade before the establishment of Earth Day, it has a well-developed ecological theme, handled with maturity and intelligence.

1900. The idealistic Walt Murdock (Christopher Plummer) arrives in Miami to teach. He instead dedicates himself to ending the massacre of Florida’s wild birds to feed the inexhaustible New York fashion for fancy feathers. He’s met with resistance and hostility, as the ban on killing birds is not enforced. Walt is instead arrested for plucking the feathers from a lady’s hat. Other locals like Murdock — the bordello madam Mrs. Bradford (Gypsy Rose Lee), the local naturalists, and the Nathansons Aaron and Naomi (George Voscovec & Chana Eden), Jewish immigrants sharing the good life at the edge of the ‘glades. 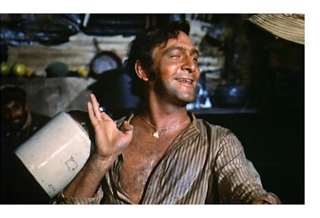 A local Audubon Society representative has Murdock’s offense commuted to an appointment as a Game Warden; the local profiteers think that’s appropriate, as the previous two wardens have met ignominious deaths. He’s dispatched to deal with Cottonmouth (Burl Ives), an outlandishly colorful feather poacher headquartered in the swamp. With his mentally impaired son Slow Boy (Fred Holland), Cottonmouth leads of a band of thugs and cutthroats, most notably Beef (boxer Two Ton Tony Galento), who makes a sport of teasing the newcomer Murdock. The pirates learn that Murdock is no fool. He avoids a trap or two but cannot help his new Indian friend Billy One-Arm (Cory Osceola). For helping Murdock, Cottonmouth has Billy tied to a Manchineel Tree, which has sap that kills. Barely surviving his trip into the Everglades, Walt begins a romance with Naomi (Chana Eden). When the local magistrate (writer MacKinlay Kantor) finally issues a warrant for Cottonmouth, Walt goes into the ‘glades again, not realizing that his guide is going to deliver him straight to the murderous poacher’s compound.

Let’s get the bad news over first: Wind Across the Everglades bears deep scars from editorial hacking and post-production cheapness. The music is patchy and several performances use very artificial-sounding dubbed voices, mixed discordantly against natural performances. People speak and no sound comes from their mouths. Wild lines are constantly being dubbed in to rescue the continuity. An Indian’s widow, finding Murdock sick and weak, says that she’ll take him to her people — but we never get there. Many of the film’s supporting performances seem to have been left on the cutting room floor. Cottonmouth’s gang includes eight or nine distinctive characters played by special talents — the famed circus clown Emmett Kelly, and Peter Falk in his first film. But editorial cuts keep them in the background. Cottonmouth is shadowed by a blonde boy with a perpetual grin on his face. One must pay attention to discover that he’s the poacher’s son, and not a gay companion.

The film does no favors for Shulberg’s discovery Chana Eden, a strikingly beautiful former airline hostess from Israel. Her impressive performance as Naomi was greatly cut back, like everything in Everglades not directly related to the Walt-Cottonmouth conflict. Viewers might not realize that Naomi and her father Aaron are Jewish refugees, not even after she gives Walt a Star of David medallion as a gift. 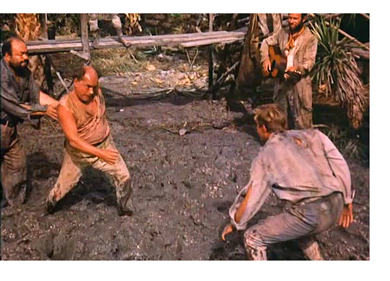 The final editorial on the independent production was done by studio cutters under Warners’ Rudi Fehr, who didn’t waste time with artistic decisions: a three-hour rough cut came down to just 93 minutes. What’s there is very good, and counter to the claims of the producers, it has the vitality of some of Ray’s best work. The anything-goes community of Miami circa 1900 is sort of a final frontier for wild types, immigrants, and fugitives. Walt Murdock’s nature-loving activist fits in well with these eccentrics, which is all for the better: only an idealist could go up against the murderers of the swamp in such good spirits. Christopher Plummer replaced Ben Gazarra at the last minute but proves to be perfect casting. Plummer has the wicked sense of humor required to voluntarily play drinking games while under a sentence of death. The story has great fun with the pack of hypocrites in town, that market the feathers smuggled in by Cottonmouth’s men — one very good gag has Walt discover a shipment of contraband plumage being smuggled into town in sick man’s mattress.

The locations are authentic and scenery unusual. Even the interiors were filmed at a town outside of Miami, which in 1957 still had dirt streets. Although Budd Schulberg insisted they were his doing, the film has many quirky character moments typical of Nicholas Ray. Gypsy Rose Lee — yes, the famous Gypsy — has a memorable bit making sure that the dancing in her parlor is ‘decent.’ An Independence Day celebration sees Walt and Naomi finding some privacy by crawling under the bandstand, to kiss and avow their love for each other. Walt’s two or three brief speeches about conservation are excellent. 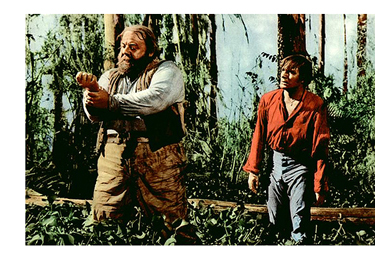 Murdock is inspirational when he talks about the Everglades as a Garden of Eden, or chides (not lectures) Cottonmouth on the crazy tragedy of people ‘destroying everything.’ Cottonmouth responds that he only follows one law, “Eat or be et.” Their final meeting is a really good night of drinking; the performances communicate the odd bond formed between these mortal enemies.

I’d say that Wind Across the Everglades was ahead of its time, but ecologically themed movies have never had it easy. It had no better chance for box office success than did John Huston’s The Roots of Heaven, another 1958 release that took up the then-novel idea that the world’s wildlife was in danger of extinction. Ray’s movie hangs together well enough considering that it was so greatly truncated. A prologue in New York was dropped before filming, and the ending was filmed after Ray’s exit. We’re told that in the original script, Walt Murdock was supposed to die. That idea doesn’t sound like an improvement.

Budd Shulberg felt betrayed by what he called a ‘non-functioning’ Ray, and took a possessory credit in the film’s advertising. Whatever Nicholas Ray had as a director, it shows, for the dramatic tension throughout has his mark of believability. He wasn’t allowed in the editing room, and in his last notes asked for many changes. None were carried out, including the removal of his name. But we still see it as a Ray picture. 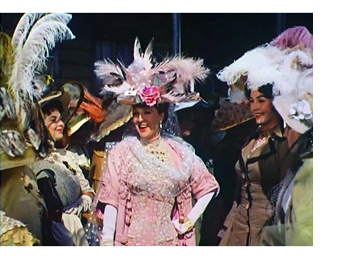 The Warner Archive Collection DVD-R of Wind Across the Everglades is a good encoding of this ‘minor’ release that’s been given a fairly high roost in the works of Nicholas Ray. The image is bright even if the color values shift at times, even in the middle of a scene. Some of the cutaways to wildlife shots also don’t match well, even though we’re told that they are not stock shots. The audio suffers only in that the original mix was such a patchwork — the replacement dialogue sticks out badly, and the library cues by Sawtell and Shefter don’t always seem well chosen. But the movie has several instances of source music — a blues singer in the brothel, an authentic folk song in Cottonmouth’s camp — that attest to Nicholas Ray’s experience studying music with the WPA.

The disc includes an original trailer that’s missing both text and a dialogue track… all that remains is narration, and even it sounds like it might not be the final voice.