With a script by Lynch adapted from the 1989 novel by Barry Gifford, Wild At Heart tells the tale of young star-crossed North Carolina lovers (and thrash metal connoisseurs) Sailor Ripley (Cage), a noble blue collar troublemaker with an Elvis complex, and Lula Pace Fortune (Dern), a rebel in constant conflict with her domineering mother Marietta Fortune (Ladd). Standing in the way of our heroes’ quest for happiness is a typically Lynchian menagerie of maniacs, fronted by Marietta.

As our story begins, Sailor is released from a nearly two-year prison stint for his self-defense in the killing of an assailant, Bobby Ray Lemon (Gregg Dandridge), who had pulled a knife on Sailor at the secret behest of Marietta, smarting from a recent rejection after coming on to her daughter’s boyfriend. Despite Marietta’s vehement protestations, Sailor and Lula reunite for some passionate hotel lovemaking and equally tempestuous club dancing at a Powermad concert. 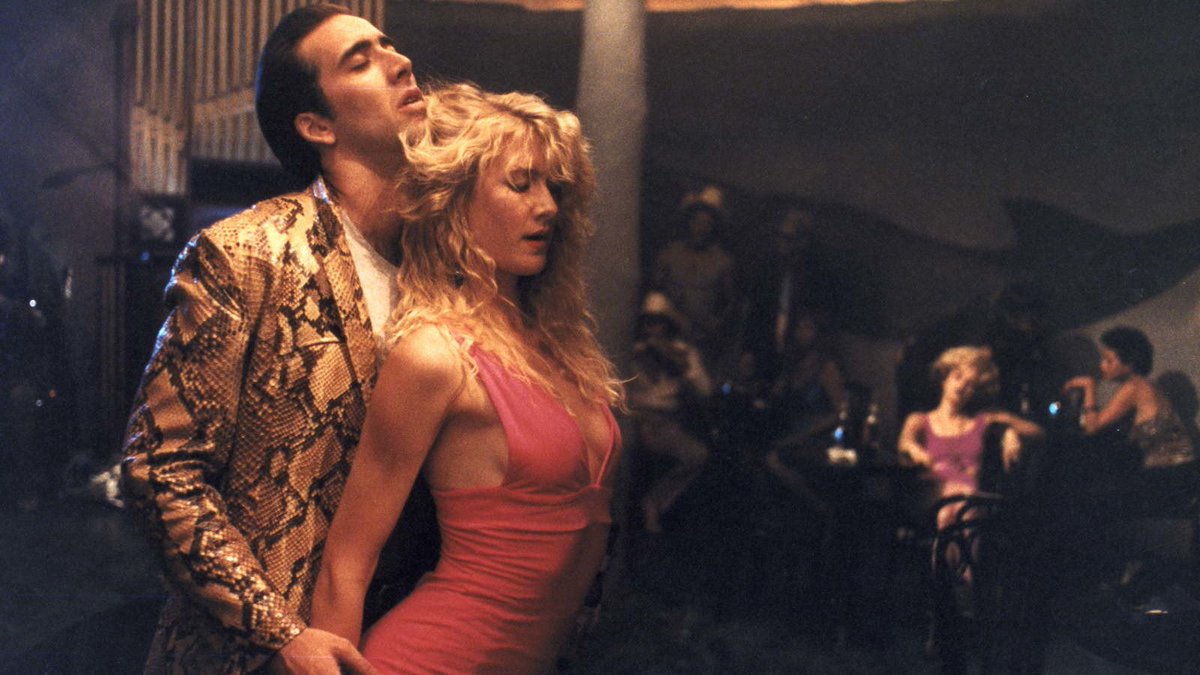 Determined to be together, Sailor and Lula set their sights on Southern California, ignoring the terms of Sailor’s parole in the process. In a typically over-the-top touch, Cage goes full-on midcentury Americana, driving a 1965 Ford Thunderbird convertible and cementing his Elvis impression via an iconic snakeskin jacket. Sailor also serenades Lula, whom he has nicknamed Peanut, via two Elvis cuts in the movie, “Love Me” and “Love Me Tender.”

Soon, the malicious, scheming Santos and the good-hearted fool Farragut find themselves at odds. Sailor, hard up for cash in his struggle to provide for Lula, eventually links up with predatory thief Bobby Peru (Dafoe), who may be more connected to the world Sailor has been striving to outrun than we know, for a bank heist.

The film was a controversial Palme d’Or winner at the 1990 Cannes Film Festival ahead of a muted domestic theatrical run. Its legacy, however, resides in its utter Lynchian strangeness. Lynch takes the outline of a fairly streamlined lovers-on-the-lamb narrative and subverts it with typical aplomb, empowered by the success of his previously brutal surrealist masterpiece, Blue Velvet (1986) and the then-recent premiere of his Twin Peaks (1990-1991, 2017) pilot, a similarly skewed interpretation of a suburban family drama.

Theatrical Wizard of Oz (1939) allusions, highly sexualized cigarette lighting, surreal visions of fire, and an out-of-time Elvis impression guarantee that Wild At Heart sails far beyond the confines of what could be a very straightforward love story in other hands. The narrative is beside the point, though it is clear and engaging enough to keep us thoroughly locked in to its story. This is the tale of a passionate desert adventure where two troubled kids are beset by a carnival of fiends with very cruel adult fates in store for our hero couple when they are ensnared, but more than that, it is almost a parodic exploration of its own distinctively cinematic trappings.

Ladd, Cage, Dafoe and Glover (having a ball as Lula’s Christmas- and cockroach-loving psychopathic cousin Dell) in particular turn in dementedly broad performances in Lynch’s nightmarish interpretation of the American Southwest. The more restrained Dern and Dean Stanton, while still over-the-top per the terms of the tale, equip us with an emotional grounding that gives us a rooting interest in this world. The film is dripping in sex and violence, so much so that it almost merited a restrictive X rating from the MPAA. Its dreamy visuals and operatic music cues linger in the brain long after the curtain has come down and the lights have come up.