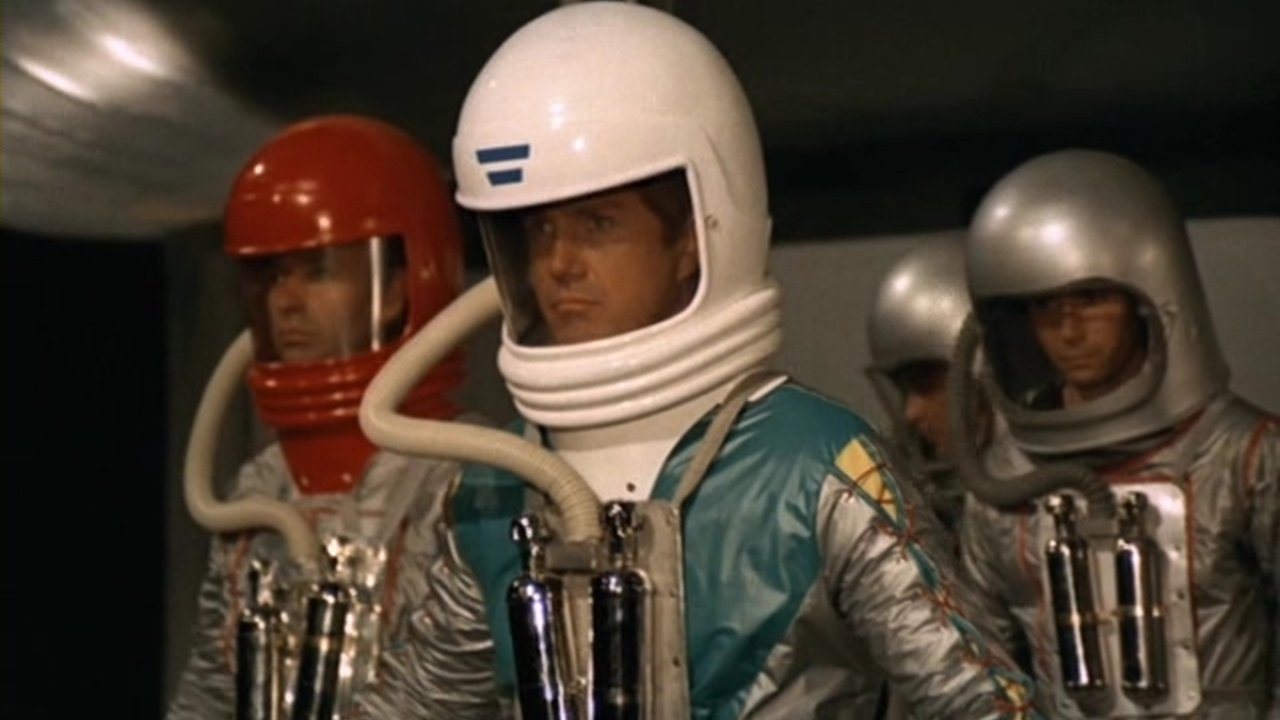 Ballyhoo values and the title will make this Italian science‑fiction import an OK dual bill entry for the kiddie trade and drive‑ins. Drab and juvenile for mature sci‑fi fans. Rating: G. 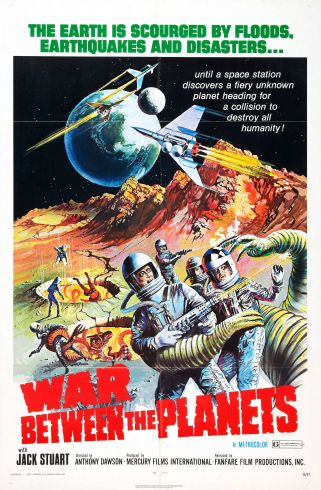 Its exploitable if inaccurate title, flashy ad campaign and G rating will put over this slow, drab and unconvincing mid‑’60s Italian space opera in kiddie‑dominated double feature markets and drive‑ins. The Fanfare Films release, picked up from MGM, will be doubled with another Italian sci‑fi epic, SUPERARGO AND THE FACELESS GIANTS, for probable solid business this summer. As entertainment, though, WAR BETWEEN THE PLANETS not only lacks excitement, it never even comes up with the promised war. Instead, the menace is a bright red living asteroid, described as “a body lacking in density and moving at too slow a speed.” That about sums up the film itself, which looks cheap, takes forever to get going, and is filled with some of the flattest, most juvenile dubbed dialogue since WILD WILD PLANET (1966**), the last such entry from director Anthony Dawson (Antonio Margheriti). The planet’s presence in the solar system is causing “floods, earthquakes and disasters” on Earth—which we see only as old tinted newsreel clips. “This thing is obviously determined to crash its way through the universe!” surmises wavyhaired, square‑jawed Commander Rod Jackson (Giacomo Rossi‑Stuart, Americanized as “Jack Stuart” in the credits), whose fearless team is dispatched into space by the United Democracies to get rid of the planet.

Occasionally the spacemen venture out into the void, suspended on shamefully obvious wires, but mostly all they do is sit around the spaceship looking dour, worrying about Earth and sorting out the Commander’s romantic problems. Finally, during the last 20 minutes, they land on the asteroid to plant anti‑matter bombs, and a few crewmen get theirs from planet tentacles that spurt what looks like vegetable soup when severed. Unfortunately, they lose the primer needed to set off the bombs and a brave supporting actor has to sacrifice himself to blow up the planet. In case we miss any of the few meager plot details, after each scene a stentorian narrator carefully explains everything that happened. Special effects are decidedly unspectacular, and the miniatures look very miniature. Even the spaceship interiors are colorless—there’s only one pitiful flashing light on the interstellar console. The cast mugs, postures and grimaces comically throughout, but the overall effect is still one of unrelieved tedium. The Metrocolor processing is often extremely grainy.

Some who attended matinees of WAR BETWEEN THE PLANETS were surprised to find themselves face-to-face with a movie that had been playing on American TV for years under the title PLANET ON THE PROWL. It was under this alternate title that the film was briefly released by Monterey Home Video in the 1980s.