Gian Maria Volonté has a big part in this prime quality Italo crime thriller blessed with a great score by Ennio Morricone. But the movie belongs to Robert Hoffman as the real-life public enemy who earned the alias ‘The Machine Gun Soloist.’ Director Carlo Lizzani’s realistic treatment glamorizes nothing and implicates the police in shady policies as well. Award-winning co-star Lisa Gastoni is the woman who loves Hoffman, and is tempted to betray him. 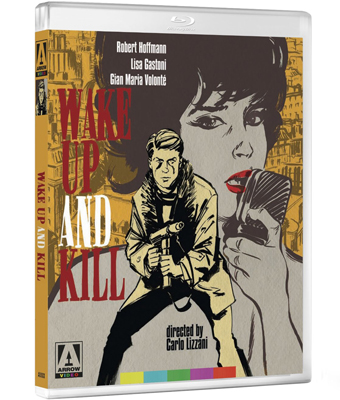 Ten years ago we were thirsting for ’50s French noir by Melville, Clémént and Becker; now we’re hoping that companies like Arrow will bring us more vintage Italo crime by the likes of Lizzani, Ferrara, Moffa, and Rosi. We’ve had ’70s Eurotrash exploitation crime shows up to our ears, but the classics beckon. This is a great start.

Carlo Lizzani has screenwriting credits on classics like Rossellini’s Germany Year Zero and De Santis’ Bitter Rice. He began directing in 1951 with Achtung! Banditi!,  a WW2 story about anti-Nazi partisans as they really were, not saints but often criminals. The blurring of gangsters and patriots runs through some Italian films of this period, culminating in Rosi’s Salvatore Giuliano. 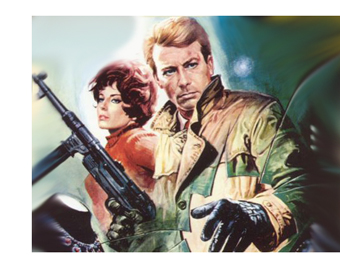 Lizzani was known for filming real-life events almost immediately after they occurred, and sometimes before all the facts were in. His big picture for Dino de Laurentiis Banditi a Milano (1968) stars Gian Maria Volonté in a partly improvised account of the Cavallero gang. The armed robbers terrorized the public in open shootouts on the street, firing at passersby to convince the police to withdraw. Phil Hardy’s Gangster Film Encyclopedia says that, as the real facts of the Cavallero crime wave emerged, the movie’s fictional inventions adversely affected its reputation.

Wake Up and Kill from 1966 has an impressive screenplay by Lizzani and Ugo Pirro, the writer behind Elio Petri’s hit Investigation of a Citizen Above Suspicion. Unlike most Italian caper and crime thrillers of the time (Machine Gun McCain, They Came to Rob Las Vegas), Lizzani’s picture is doggedly realistic about its subject, and unblinking in its depiction of treachery on both sides of the law. It also makes us wonder if the overblown reputation of its criminal ‘hero’ was an invention of the yellow press.

Wake Up and Kill sticks closely to the case of Luciano Lutring (Robert Hoffmann), who begins as a humble car thief and a smash ‘n’ grab robber. Lutring frequently avoids capture because he looks too substantial to be a crummy crook, breaking windows to steal jewels in Milan and San Remo. Ditching his job in his father’s dairy store, Luciano picks up and marries lounge singer Yvonne (Lisa Gastoni of The Wild, Wild Planet). He pulls jobs at an alarming pace, and when he eventually hooks up with other thieves, the robberies become more violent. Dubbed ‘il solista del mitra’ (the ‘Machine Gun Soloist’) because a submachine gun was found in a violin case, Lutring seems uncatchable, even when the police give chase in cars and on foot. At one point he invades a newspaper editorial room, complaining that they’re distorting his crimes. Yvonne is his main weakness. Thinking that she’s betrayed him with her old boyfriend Franco (Claudio Camaso), Lutring becomes violent.

Luciano’s infamy becomes a major liability. Notoriety causes Yvonne to lose desirable singing jobs. More than one close call forces them to abandon their loot. Fellow crooks charge huge sums just for a safe place to sleep, and Lutring’s own associates set him up to be the fall guy in a larger robbery. They arrange for him to show up after a heist has gone down, knowing that he’ll be met by hundreds of cops. Pursuing Inspector Moroni (Gian Maria Volonté) finally gets his break when Yvonne, without Luciano’s permission, comes forward to broker a surrender. She’s soon taking Moroni’s money for informing. When Luciano tries to pull off robberies in Paris and Nice, the police politics become ugly. The cordial relationship between Moroni and his French counterpart Inspector Julien (Ottavio Fanfani) is a fraud. Each double-deals to hog the credit for the big arrest. 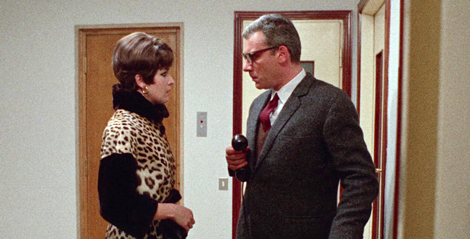 Lutring is daring but amateurish. His cohorts use slingshots to break store windows so he can snatch jewelry and watches. He evades capture because he picks targets in crowded streets. When things go bad Lutring is forced to improvise. He loses a pile of loot and a second machine gun going through airport customs. More than once, the only thing that saves him is an instinct for knowing when to run.

The later crime action is brisk and brazen, and filmed in a semi-docu style. Machine guns are fired into the air to panic the crowd and make escaping easier. For one heist, two machine-gunners jump from the back of a vehicle that’s going at least twenty miles an hour, and do body rolls on a hard concrete sidewalk. Ouch, or Ahia!  Images of Lutring brandishing his machine gun and embracing Yvonne atop lavish furs remind us of the next year’s fantasy bandit movie, Diabolik. But the treatment is resolutely realistic, bolstered by locations in San Remo and Milan in Italy, Paris and Nice in France, and side trips to Amsterdam and Zurich. 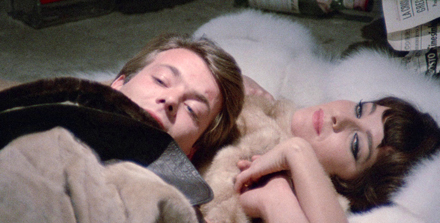 For a picture virtually unknown now, Wake Up and Kill is quite a package. It doesn’t have the look of the cheap Euro crime films that more often than not turn out to be vehicles for some macho actor with big hair. The direction and cinematography remind us of The French Connection, while the portrayal of outlaw lovers on the run attempts none of the radical-chic glorification of Bonnie and Clyde. Lizzani’s film came before either of them. The only overtly stylized sequence is an early nightclub scene, in which Gastone’s Yvonne materializes from behind a stage scrim to sing under red lights. The music is by Ennio Morricone, who provides a couple of pop songs and some of his bouncy discotheque rock. An action cue is very much a precursor of his phenomenal music for The Sicilian Clan, with almost the same guitar riff.

Handsome Austrian actor Robert Hoffmann had played a young Robinson Crusoe for a French TV series, and reversed that image as the charismatic but ruthless Lutring. Hoffmann is particularly suited to this character, a guy accustomed to getting by on his looks. He accumulated solid credits in genre pictures (Grand Slam, Spasmo, The Old Gun).  Pirro and Lizzani’s screenplay is aware of Lutring’s existence as a media construct:  is he really a tough killer, or was his image hyped to sell newspapers?  He openly admits to being terrified on his jobs. At one point Yvonne asks him if he’s wet his pants again! 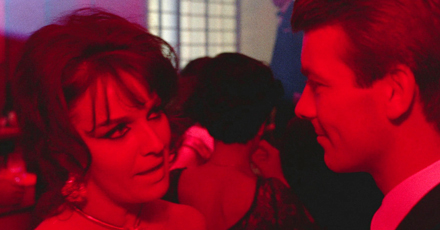 American film fans may remember Lisa Gastone from forgettable roles in a couple of producer Joseph Fryd’s space movies by Antonio Margheriti. Her Yvonne here is as self-contradictory as the moll of a cheap thief would have to be, but not a total ditz. We first see her singing in a club, a great entrance that immediately snags Luciano — her whole look, including her hairstyle, is a knockout. Like Clyde Barrow, Lutring whisks her away in a stolen car and takes over her life. Yvonne offers to go back to stripping so her husband won’t have to steal, but he’s too deep into his lifestyle. Another crook calls him both smart and lucky, but his luck doesn’t last. Things become so dire that they find themselves sleeping on a pile of stolen furs, on the floor of a hotel storeroom rented for thousands of lira. When the cops come they have to leave it all behind. Yvonne goes on TV to plead for her husband’s safety. It’s an early ‘reality TV’ situation:  is she there to help Luciano, or to pick up some extra cash? Gastone received a couple of Italian acting awards for this role.

Gian Maria Volonté’s police inspector has no action scenes, yet his presence raises the show to a higher level. His brother Claudio plays Yvonne’s previous boyfriend Franco, here using the name Camaso. Readers of Tim Lucas know Claudio from Mario Bava’s A Bay of Blood (Twitch of the Death Nerve); a look online will tell his sad story. Franco’s crude lout is the exact opposite of Luciano, who is so suave and well dressed that he can charm a hotel cashier into accepting his stolen loot in lieu of money. 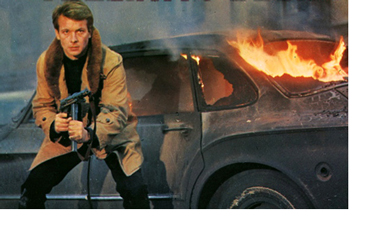 Volonté’s police inspector gets more screen time in the final act, when Lutring has been reduced to a man on the run, ping-ponged between countries by forces out of his control. The emphasis shifts to a social critique. Moroni ‘plays’ Yvonne, going so far as to promise her singing work in the big clubs. For the lawmen of two countries, the need to stop Lutring is secondary to catching him in a way that yields the best career outcome. By the time of the curiously un-dramatic final scene, Luciano Lutring is almost an irrelevance in his own story.

The real-life Lutring was sentenced to 22 years but only served twelve… because he received an unprecedented double pardon by Presidents of both France and Italy. Now how does something like that come about?

Wake Up and Kill had no name actors that meant anything in the States, so it found distribution here with the non-major outfit Cinemation, whose other 1966-67 releases included gems like Africa Addio, Shanty Tramp and Teenage Mother. It was trimmed by almost half an hour. I wouldn’t be surprised to learn that this is the first time Wake Up and Kill has played over here intact, in any form. 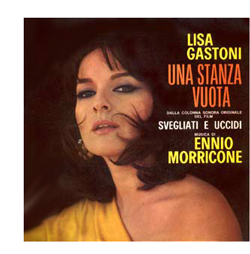 Arrow Video’s Blu-ray + DVD of Wake Up and Kill is an all-region disc; I presume that if you buy from an American distributor, the DVD will be NTSC. The extras are thin but Arrow includes both versions, the two-hour + Italo cut and the 97-minute cut-down. The transfer is excellent. I wonder if Arrow edited the good original Italo video over the Cinemation cut, because the image quality looks identical, at least at the beginning. The color is outstanding in the nightclub sequence, which is a musical treat for Ennio Morricone fans. According to the on-screen Italo credits, Lisa Gastone does her own singing. Morricone’s atmospheric song “Una stanza vuota.” I saw only some cinch marks here and there near reel changes.

The Italian audio mix is excellent, and the English not bad. The only other extra is a U.S. trailer so brief it might have been for TV use. The film’s official title is a little mysterious: the on-screen Italian name either acknowledges a second title, or combines two into one. It reads:

Arrow’s illustrated souvenir booklet is said to include rare photos plus an essay by critic Robert Curti. My screener is a check disc, so I can’t comment on it, or the DVD.

Savant, or just Glenn, likes feedback and answers all notes, corrections, inquiries and stern warnings.
Write me at dvdsavant@mindspring.com .