Is this a genuine classic? I think so. Sure, it’s the old story of the blind girl in jeopardy, but it’s been worked out so well. Audrey Hepburn, Alan Arkin, Richard Crenna and Jack Weston shine in a keen adaptation of Frederick Knott’s play, which could be titled, Dial C for Can’t See Nuthin.’ 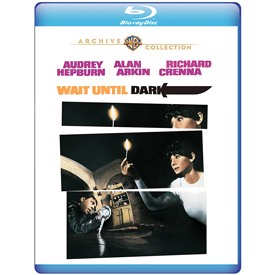 This old-fashioned, semi- stage bound thriller is a real keeper: I must have seen it six times in fifty years and it has seemed fresh and vital every time. James Bond ace Terence Young delivers a truly excellent job of direction aided by a crack group of actors, with Alan Arkin fresh from The Russians are Coming, The Russians Are Coming and Audrey Hepburn from How to Steal a Million.

Once again, a stage production confined to a few rooms proves to be excellent thriller material. America’s adopted princess Hepburn scores as a vulnerable blind woman set upon by a trio of murderous conmen. Sure, it’s a stage play, but if audiences buy the setup many a good stage play has been turned into a good movie. Wait Until Dark by and large translates beautifully to the screen. For basic shocks it outdoes 90% of movies that call themselves horror films. 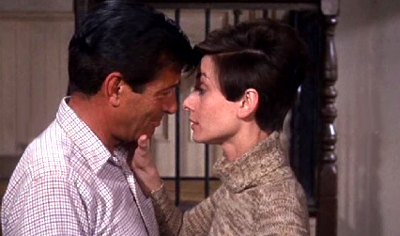 Recently- blinded Susy Hendrix (Audrey Hepburn) is coached to be more self-reliant by her photographer husband Sam (Efrem Zimbalist, Jr.). But Sam has inadvertently come into possession of some hidden drugs that the maniac crook Roat (Alan Arkin) wants back. To recover them Roat hires unsavory conmen Mike Talman and Carlino (Richard Crenna & Jack Weston) to pose as an old friend of Sam, and a police detective. Audrey is quickly ensnared in their elaborate con game. Her only aide is girl from upstairs, the sometimes- bratty Gloria (Julie Herrod). How can the defenseless Susy hold off the three sinister killers? 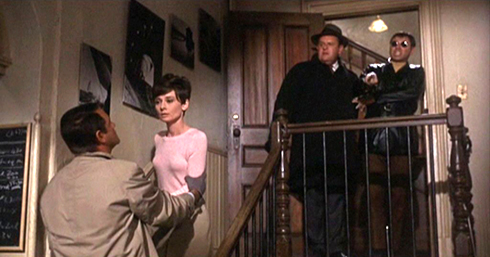 Just about the time when horror was once again becoming a fringe-market genre, several late- ’60s titles brought the scare show back to the mainstream. Roman Polanski’s Rosemary’s Baby was probably the biggest booster, but the previous year’s Wait Until Dark proved an excellent shocker as well. It attracted mainstream audiences that wouldn’t be caught dead at a Hammer film. The Audrey Hepburn fans who thought they’d find themselves in another lighthearted Charade were confronted by a much darker thriller that cleverly moved from fun suspense into more dangerous territory. The movie has a shock or two that any horror producer would envy. Yes, film theorists will be quick to point out that the conservative plotting never implicates our heroes in any ‘dark themes.’ We know from the start that Sam and Susy are totally innocent. But the show’s overall superiority makes such concerns seem like excuses to validate lesser movies: ‘Oh, horror film X is significant because it proposes a voyeuristic understanding with the audience’, etc. This is a straight thriller with sympathetic characters, that exists for its own entertaining sake.

The adaptation opens up Frederick Knott’s stage play only slightly. After a swift title sequence, the play remains rooted in Susy Hendrix’s claustrophobic one-bedroom apartment, with just an occasional bit playing on the street outside. The apartment setup is very similar to Knott’s earlier suspense play Dial M for Murder, an equally complicated stage thriller successfully translated to the screen by Alfred Hitchcock, in 3-D. We have to assume that Knott must have lived in such an apartment. In fact, when Gloria comes down the stairs to Susy’s sub-level rooms, we find ourselves saying, ‘look under the stair carpet for the key.’ 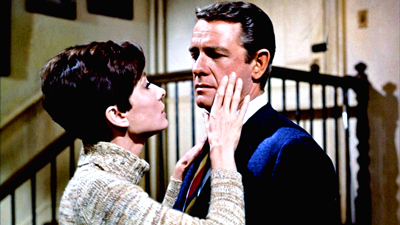 Terence Young’s tight and meticulous direction shows us the workings of the intricate scam that Roat and Co. run on the defenseless Susy, being careful to keep us informed of every nuance. The suspense is excellent, for there’s tension among the crooks and enough deceptive play-acting to keep us unsure of the bigger picture, until some decisive violence puts us on the right track. We get to play along with the conmen, watching the weasely Jack Weston enjoy his role-playing. Richard Crenna’s villain may be softening in the presence of Hepburn’s innocent, a feeling easily encouraged by the actor’s association with more positive roles.

Aided by the ability to cut away to a few telling scenes outside the apartment, the story of the three villains might actually be better told on screen. The only possible weakness (I haven’t seen the play) is the disguises adopted by Alan Arkin, which wouldn’t fool any sighted person. Stage audiences were perhaps supposed to initially believe that Roat Senior and Junior were different people. Although Arkin’s character is otherwise brilliantly conceived, the acting stunt of multiple roles, even as overt charades, doesn’t work too well. 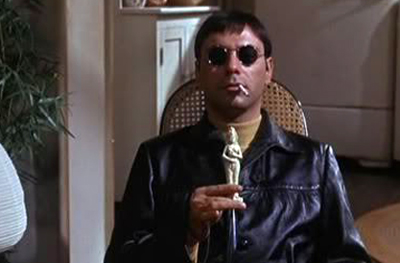 Arkin’s bespectacled, cool mastermind Roat is the kind of brilliant reptile that exists only in complicated thrillers. He neatly establishes his superiority to his hired cohorts in a scene similar to Ray Milland’s baiting of Anthony Dawson in the Hitchcock film. From then on we are too caught up in following the clever con to become too critical about plausibility. In the accompanying interview docu, Alan Arkin says that he wanted Roat to be a total weirdo, wired on several drugs at once. Audiences were surely intimidated by his clever manipulations and mannerisms. Knott, the writers and Young also make sure to plant a gruesome shock near the beginning to assure us that the film means business. In 1967 the discovery of an unexpected corpse was guaranteed to disturb general audiences. After things like Two for the Road and My Fair Lady, viewers were also unprepared to see their delicate princess Audrey Hepburn in such dire jeopardy.

The plotting never falters. Young works up a suspenseful frenzy before it comes time for the blind Hepburn to go one-on-one with her main assailant. (slight spoiler) The big gimmick here is a blind person’s use of darkness to even the odds with a sighted foe. The play works some nice variations on the idea without getting silly. We’re told that theater owners were actually asked to lower the house lighting for the ‘dark’ scenes, a gimmick that may have had a great subliminal effect. When I saw the picture new I remember that the theater seemed darker than ever during these scenes. But I don’t remember being conscious of the house lights being dimmed.

Director Young engineers his big surprises not by withholding information but by keeping us informed of exactly where Audrey and her attacker are, in a confined space that we now know by heart. It may be a mainstream Hollywood picture, but for real scares Wait Until Dark betters its contemporary competition, not to mention many of the later Giallo and slasher pictures.

Audrey Hepburn is screen center most of the time and gives a fairly realistic portrayal of a woman coping with her dark new world. Our sympathy for her is high, especially because of Efrem Zimbalist Jr.’s demanding husband, whose insistence on his wife’s self-reliance makes some viewers dislike him… why doesn’t he just come to the rescue as in 99% of other thrillers? Arkin has the showy part, and once again gained a lot of attention. Unfortunately, this may have been the height of his career. When graduating to lead roles, he didn’t create the same stir — as witness the fumbled Inspector Clouseau and the excellent but career- numbing Catch-22. Arkin wasn’t the sort who was going to kiss the girl and be the hero, and most of his later films weren’t as interesting. A good exception is the very appealing Popi, from 1969. 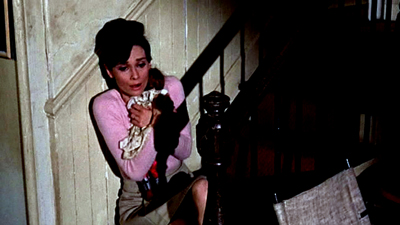 The Warner Archive Collection Blu-ray of Wait Until Dark is a fine encoding of a smart, stylish thriller that starts in a chilly modern airport and then plays out in a single cozy apartment / photographer’s studio. One wonders whether Frederick Knott conceived of the show by combining his own Dial M for Murder with Hitchcock’s Rear Window. It is the apartment of a photographer, but the gender roles are reversed. Instead of seeing too much, the hero-turned heroine sees nothing. Very clever.

The main titles are done in a style similar to those for WB’s Bullitt made the next year. The restoration of the original widescreen ratio also restores the impact of a particular shot near the end. You’ll know what shot I mean.  Back in the day it made audiences leap out of their seats.

The extras are repeats from the DVD from thirteen years ago. Producer Mel Ferrer, the star of Lili and Lost Boundaries  was Audrey’s husband at the time. He and Alan Arkin and contribute to a nice interview- docu that covers all bases without overstaying its welcome. Arkin’s soft-spoken thoughts on the Roat characterization were illuminating to this viewer. A pair of effective trailers is included as well. One is a teaser that tries to generate a Psycho- level of unease.