John Ford’s favorite western of his own work is a curiously gentle, endearingly simple hark-back to the verities of silent filmmaking. Mormons crossing the desert are encumbered by show people and beset by a nasty outlaw family — but don’t worry ’cause the Sons of the Pioneers will still be singing backup for ‘The Chuckawalla Swing.’ Ford rodeo discovery Ben Johnson returns with Harry Carey Jr. and every other Ford stock player not nailed down, and the marvelously direct cinematography is keyed to Ford’s idealized vision of life on the frontier. 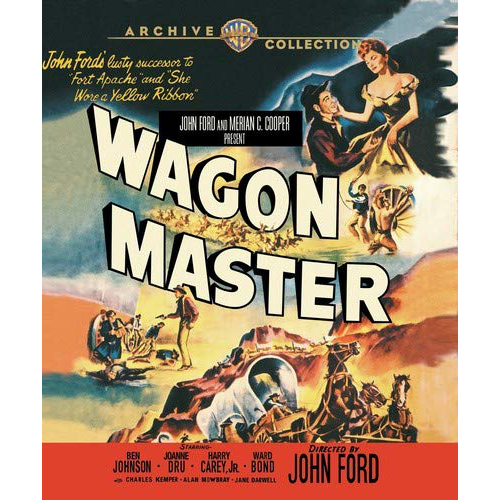 Wagon Master is an uncomplicated, heartfelt cowboys ‘n’ settlers story with a gentle touch. John Ford produced it himself, reportedly not hiring a big star so to make the experience as pleasant as possible — or, John Wayne didn’t make himself available. Here’s where we find out what kind of film Ford makes when he has his way undisturbed by studio heads and bean counters — and the turns out to have a style resembling a silent movie. If you like ‘pure’ westerns that showcase clean thoughts, onery villains, good horse riding and classy cowboy skills, Wagon Master is a must-see title. It’s now common to regard the movie as Ford’s notion of happy filmmaking. When I first saw it, I realized, ‘this is exactly what we little kids in the 1950s thought cowboys were all about,’ way before downbeat closing-of-the-West movies re-invented cowboys as rootless vagrants unable to find work.

When I think of Wagon Master I’m reminded of a friend, the late Robert S. Birchard. I saw it for the first time around 1971, when fellow UCLA student Bob, a collector-historian, showed us his perfect 16mm print. John Ford was still just a name to me, whereas I was currently enthused about Sam Peckinpah’s The Wild Bunch. Western film history came into better focus when I realized how strongly Peckinpah’s film referenced the Ford tradition. This old B&W picture not only starred a very young Ben Johnson, it made use of the hymn “Shall We Gather at the River?” Perhaps Peckinpah was redefining Ford’s work, interpreting the same elements in his own way…

Wagon Master is indeed a slightly different take on the ‘communal experience’ of the standard wagon train epic. Led by Elder Wiggs (Ward Bond), a group of greenhorn Mormon settlers is grateful when two experienced cowboys sign on to help them reach the ‘promised land’ of the San Juan River. Travis Blue and Sandy (Ben Johnson and Harry Carey Jr.) don’t stand to make much money, but they’re nice guys and it’s obvious that the Mormons can’t make it through the desert on their own. The deal isn’t all charity — Sandy also has an interest in one of the Mormon daughters, Prudence Perkins (Kathleen O’Malley). In addition to the usual cross-country indidentals — Indians, a shortage of water — the wagon train picks up a trio of abandoned show people. Doctor A. Locksley Hall (Alan Mowbray) sells snake oil, and his consort Fleuretty Phyffe (Ruth Clifford) is a heavy drinker. With them is Denver (Joanne Dru), a showgirl of dubious reputation. Trouble comes when the murdering Clegg Gang barges in and seizes the wagon train as a place to hide out from the law. Crafty old Uncle Shiloh Clegg (Charles Kemper) can barely control his animalistic sons, one of whom puts the entire wagon train in danger when he rapes an Indian woman. Kemper, a really fine actor, was killed in a car crash not long after filming. He’s also great in his final movie On Dangerous Ground.

The UCLA audience I saw Wagon Master with way back when thought it a corny fossil, but today’s college students might be more open-minded. John Ford includes a liberal helping of songs by The Sons of the Pioneers, a mellow western group that enjoyed wide popularity in the postwar period. The style hasn’t exactly come roaring back into fashion, except maybe when parodied by the likes of the Coen Brothers. Ford is also fond of stopping the narrative for pleasant square dancing scenes. ‘The Chuckawalla Swing’ is about as un-cool a tune as one can imagine, and leaves out viewers who can’t appreciate past forms of entertainment. The same reaction sometimes crops up when the superlative The Searchers is screened: somebody invariably laughs at the, ‘what makes a man to wander?’ title song.

John Ford likely named this show his favorite because of the music: listening to ‘old timey’ tunes while watching wagons and horses do their thing must have been a favorite activity. We see accordionist Danny Borzage playing now and then. We’re told that he played atmosphere music on Ford’s silent sets, and just became part of the stock company.

But Wagon Master is excellent filmmaking, no excuses needed. Ford establishes his characters with ease. He elicits a fine performance from Ben Johnson, a former rodeo star who rides horses across broken ground like he was spreading butter on toast. Once the Ward Bond character has shamed his none-too-tolerant brethren into accepting the ‘fallen’ show folk as acceptable fellow travelers, the Mormons come off as good people. Just the same, Ford emphasizes telling portrait close-ups of Mormon women looking at the Navajos with fear and hatred. Sandy discreetly courts young Prudence, and even ends up riding a wagon with her at the end of the film, which seems a rather tolerant interpretation of the creed. Either that, or Sandy is joining up with the flock, and Travis will need to find a new pard’ner.

This is also a good film for actor Ward Bond, as a communal leader who knows he’s not up to every challenge. Johnson’s Travis advises Elder Wiggs the way Johnson’s Sgt. Tyree in She Wore a Yellow Ribbon advised John Wayne, always deferring and respectful. It’s interesting that Travis doesn’t emerge as a standard dominant hero, a John Wayne character that brushes problems aside and makes his name Law. The wagon train is the star. Ford gives star Joanne Dru some good scenes but doesn’t allow her to take the movie away either — her Denver never even kisses Ben Johnson. The movie does have an irritation or two — Ward Bond’s ‘gosh darn damblastit’ act trying not to swear is tiresome, and when Jane Darwell blows her horn, we must stifle wishes that the whole wagon train sinks in quicksand.

What we do get, courtesy cinematographer Bert Glennon, is shot after beautiful shot of horses and wagons in action as authentic as the experts can provide. Ford’s Hollywood wranglers had forty years’ experience staging expressive western action, and the best of the best are on view here. With stunt coordinator Cliff Lyons in charge we see glorious images of wagon teams straining to climb hills, or trying not to overturn while being lowered down treacherous cliffs. Also on view are a number of excellent horse falls, both intentional and accidental. Ford is frequently the recipient of plain good luck. In one fight scene a dog just decided to run in and bite Ward Bond on the leg, tearing his pants. Ford leaves it in.

Cliff Lyons also plays a part, as the Marshall of Crystal City. Stuntman Chuck Hayward gets a role as well, as a sour-tempered rival for Sandy’s girl Prudence. It’s a classic Thankless Part, un-billed. 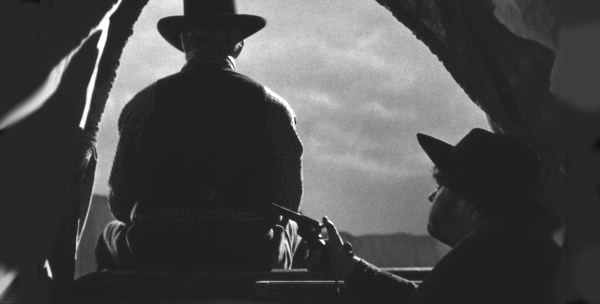 As I tried to convey up top, what Wagon Master captures best is a certain ‘western feel’ that was a big part of postwar Americana. I caught only a little bit of it as I grew up later in the 1950s. Frankly, it’s a feeling of being clean, decent and part of the natural landscape, working in a healthy outdoors that has plenty of elbow room and not too many rules. Travis and Sandy sit on a fence and haggle over the price of a horse, wearing stiff-looking blue jeans with the cuffs rolled up. We coddled white-bread ’50s kids felt the same kind of freedom. We could just set up camp in whatever vacant lot we came across, or cut through people’s property on the way to school. Not too many no-trespassing signs, and fences were to climb over or under. The world belonged to us and we had plenty of space to play unsupervised. While it lasted.

Ford must have considered Wagon Master a private ‘I’m in charge’ vacation from Hollywood pressure, a return to filmmaking as he loved it back in the 1920s when everyone had fun. The drama is serious, but not too serious. The bad-guys Cleggs are pretty rotten types that threaten to murder the settlers — we notice disapprovingly that James Arness and Hank Worden are among them. The Navajos are basically okay folks, not too bothered by these newcomers that claim a whole valley of Indian land in the name of The Lord. Among them are the famous athlete Jim Thorpe, and Movita Casteñeda, the star of Mutiny on the Bounty.

Neither of our cowboy heroes considers himself a bulletproof gunslinger type. Travis says he only draws on snakes, not people, and when finally forced to fight, he throws his gun away afterward. That’s the feeling I felt from my father and uncles, all ex-soldiers. The war was over and done with; as far as they were concerned victory and peace would last forever. They were raising kids and wanted no part of anything violent. That ‘peaceable’ streak is present in Wagon Master and makes it a sentimental favorite.

The Warner Archive Collection Blu-ray of Wagon Master is the expected high-quality transfer of this RKO classic. Western fans will hang on the visual purity of the images, while contemplating John Ford’s directorial decisions vis-a-vis his religious migrants, the Clanton-like outlaws and their patriarchal sociopath, and the gee-whiz purity of his heroes. Warners still has plenty of John Ford films to release in Blu-ray, including several with John Wayne; this was likely chosen because it a crisp transfer was already in the can.

The pristine print on view has no logos, front or back. It was originally distributed by RKO.

Repeated from the 2009 DVD is a special commentary track that fans of John Ford westerns will want to take in. Host Peter Bogdanovich hosts plays back some of his recordings of John Ford answering career questions from a 1966 audio interview — Ford contrasts silent-movie work to the then-popular Batman TV show. Sharing the track is Harry Carey Jr., who recalls being in a happy mood throughout the filming. He remembers a fountain of information on subjects ranging from the actors to Ford’s direction — he even tells us about individual horses used on the film, including their names and personalities!  Carey Jr. passed away in 2012, which makes this track doubly precious. The actor doesn’t front a star attitude and plainly states that he considers the nine pictures he did for Ford an important part of his life. He has good things to say about Ben Johnson, who he describes as a natural athlete and an amazing horseman.