Dutch doctor Rebecca Gomberts built a reproductive clinic on a ship, sailed it to countries where abortion is outlawed — Ireland, Poland, Portugal, Spain… and got responses from thousands of women in need. It’s an advocacy docu about an activist experiment that’s moving around the world, promoting positive change. 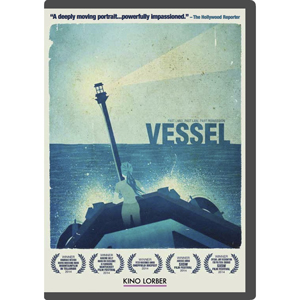 An efficient and powerful advocacy documentary, 2014’s Vessel documents the work of Rebecca Gomperts, a pro- women’s reproductive rights activist. A doctor and one-time activist with Greenpeace, around 2000 Gomberts decided to stop working in a women’s clinic in her home of Amsterdam, Holland, and to take the issue of abortion access to places where women’s freedom of health choices were restricted by law. The movie doesn’t debate the issue of abortion, although it shows counter-protests. Gomperts begins with the axiom that freedom for women means the freedom to control their own reproductive lives, period. The conflict in the documentary, shown very clearly, is between Gomperts’ organization Women on Waves and various countries where abortion is still illegal. As an advocacy piece Vessel makes no attempt to be fair or balanced — it shows the WOW’s work from a wholly approving point of view and will surely be used to promote the organization. So read with that in mind.

The issue is that women in those countries still seek abortions, come up against religious and legal barriers, and without proper information or precautions undertake medically dangerous procedures. Women on Waves began with the outfitting of a special clinic built in a cargo container that can be loaded on a small ship. As any ship outside the 12-mile limit — in international waters — is under the laws of the flag it flies, Gompert’s ship Aurora was registered as a Dutch-style women’s clinic. Although Gomperts is a doctor, no medical procedures were performed. Women instead are given pills that safely induce miscarriages.

Knowing what resistance to Women’s Health Issues is like in the United States, we worry for Gompert’s ship, which is crewed mostly by women. They do run into trouble at their first stop Ireland, because their clinic permit hasn’t yet cleared back in Amsterdam. Gomperts must do damage control with the Irish press, and deal with accusations of all kinds, including personal questions — has she ever had an abortion? As it turned out, Gomperts didn’t even need a permit if she was using the pill method. The publicity overall is in favor of Women on Waves — as Gomperts suspected, predominantly Catholic countries have great numbers of women that want this kind of access when needed. When the ship advertises its service the phone calls come in by the hundreds. Everywhere there are women that need to terminate a pregnancy, but find that the means or the information is out of reach.

Women on Waves picks up personnel wherever it goes. One of the most personable spokeswomen is a Pole who talks about the problem in her country. We hear the recorded phone calls and hear how the WOW contacts advise callers. The news is not good for everyone: the pill method is only good for early-term pregnancies.

Portugal greets them with warships and prevents them from coming into port. By now Gomperts realizes that the practicality of using the boat has definite limits, but that it is excellent for attracting publicity. Invited onto a Portuguese TV talk show, Gomperts takes the big risk — she spells out exactly how any woman can terminate a pregnancy on her own, on the air. When a male debate opponent begins to make a moral argument, Gomperts’ argument shuts him down cold. As a male, she claims, he’s unqualified to speak for women on an issue that is women’s business. More than that, it’s an essential woman’s health issue above politics and international boundaries, a basic human right. Meanwhile, back on the ship, the Portuguese authorities search in vain for an excuse to impound the ship. But no violations are found. They do ask about the many boxes of condoms among the stores. “We have eight women on this ship,” one of the activists replies, “So we need lots of condoms.”

So the WOW ship becomes more of a symbol than a real clinic. The women are daring enough to ignore the harbor police in Valencia, who expect them to obey their arbitrary instructions to go away — when a wharf of supporters are present. By this time Gomperts is proficient at using whatever peaceful means are at her disposal to prevail over resistance.

They fly to Ecuador after being asked to come by women’s rights activists in Quito, a strongly Catholic country with a poor population with limited access to reproductive health assistance, and where, according to the World Heath Organization, “abortion is a privilege of the rich.” Gomperts speaks Spanish fairly well, and she and her Dutch cohorts coach their Ecuadorian sisters in how to wisely and safely handle aggressive questions from anti-abortion activists. Some of the locals are worried, but the WOW insurgents make a big statement by hanging a huge banner from Quito’s giant statue of the Virgin Mary — to them a symbol of womanhood — reading ‘Secure Abortions’ with a phone number. The cameras do record disapproving remarks by observers. The banner is removed but there is no violence — and the Quito chapter of WOW is off and running. At every stop we hear recorded phone calls from women who are frightened and worried. The WOW contacts can help many of them. 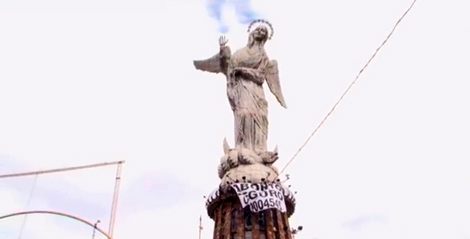 The final destination we see is Tanzania, where WOW has to conduct its business with discretion — the law there can be unpredictable. In a place where clinics are often too far away to provide basic medical care, the death rate for women with reproductive problems is alarmingly high. Working through translators, Gomperts and her aides find that the local women eager to learn more, about self-medicated abortions. We see a workshop where the women are coached on how to ask for the pills. One of the Dutch women goes into a Tanzanian pharmacy and obtains pills without a prescription, without a problem, which doesn’t prove much… a black local woman might be treated entirely differently.

Director and camerawoman Diana Whitten keeps Vessel lively and on-topic. Ms. Gomperts’ marvelous personality holds the center of this optimistic show. When zealots are unreasonable or abusive she never argues but smiles and withdraws, without conceding an inch of moral space. When she is on the attack on that Portuguese TV show she’s better than James Stewart in Mr. Smith Goes to Washington (and not as foolish). And when she’s coaching an Ecuadorian activist on the best way to confront opposition, she’s inspiring. At one point in the docu — which spans an unclear number of years — Ms. Gomperts is pregnant. She’s not at all shy about proclaiming herself a happy expectant mother, because the child is wanted and a glorious thing. Another WOW rep speaks about what the issue means to real-life women in terms that only a fundamentalist witch-finder could object to.

Although we hear a plea from a young woman in Iraq, the docu does not mention any Women on Waves activity in any Muslim country except Morocco and Indonesia. Viewers might be misled into thinking that the international information campaign is a lot further along than it probably is. We are told that the Ecuadorian activists are taking the information seminars to other South American countries.

Some older video from the turn of the millennium is a little rocky but most of the filming is excellent. The Women on Waves ships is quite a pirate vessel, polite but insistent. To me Gomperts’ crew come across as fearless sailors, as disobeying the instructions of harbormasters and cutting their tow lines is an open invitation to jail. Of course, the rogue sisters have the edge from the beginning — with the news cameras present, no official is going to get caught roughing up a boatload of women. In their defense the WOW activists are never abusive, and mock neither the authorities nor the anti-abortion activists that sometimes greet them.

One of the best things about the show is its international appeal. The Dutch core crew are out there making themselves understood in a half-dozen languages; we realize early on that Gomperts has inspired activists wherever she goes, who help with the translating. The phone calls received by the WOW contacts on the boat and back in Amsterdam are very touching, from daughters who cannot tell their parents, from wives who cannot trust their husbands. The WOW people are starting a quiet revolution. Once women take hold of the entire scope of reproductive rights, Gomperts feels certain that they will not give them up.

Several clever animation segments are used to explain how the pills work and how they’re taken, which makes Vessel more than an advocacy docu, but almost a how-to. The animation is credited to Emily Hubley, Emilie Liu and Hsien Pei Liu. Ms. Hubley is noted for the animations for Hedwig and the Angry Inch. She is the daughter of the famous John and Faith Hubley, who did their best work in a wholly different era of political troubles. I’ve read quite a bit about Faith Hubley, and I’ll bet that she would approve heartily of his entire effort.

Kino Lorber’s DVD of Vessel is a very good encoding of this HD edit collected from various interviews, director Whitten’s good on-the-scene docu coverage and excellent video from various TV shows. The only one that’s not tip-top quality unfortunately is the feed of the Portuguese talk show where Rebecca Gomperts puts on such a stunning performance. But its impact is undiminished.

The extras include a score of unused sequences, most of which are interesting but unnecessary. One piece showing Gomperts dealing with protesters at Valencia is pretty wonderful — she defuses the situation with politeness, sincerity and an acknowledgement that the other side is sincere as well.

Vessel is obviously not going to be universally welcome, but any reasonable detractor would have to be impressed by the fairness and good character shown by the Women on Waves representatives. Even though I’m pre-persuaded I believe I have a strong radar for BS and unfair or misleading arguments, and I see none of that here whatsoever. The package cover proudly displays the docu’s score of film festival wins; it did particularly well at the SXSW Film Festival. The attention-getting ideas continue at the Women on Waves website, where one can read about the use in Poland of an ‘abortion drone.’

The disc has English subtitles but only when languages other than English is spoken.