Richard Wenk’s 1986 horror comedy is even better than we remember — funny, reasonably scary, and stylish. Grace Jones’ vampire queen is intimidatingly strange, and great makeup effects and polished direction insure that the jokes and chills get equal attention. 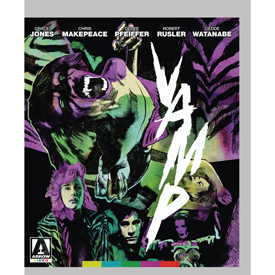 There’s a lot of love for ’80s pictures out there, mainly because the kids who went to see them back in the day are now in their forties and are beginning to feel pangs of nostalgia, which is really an awareness of mortality. Being a little older, I grimaced and suffered through a decade of Star Wars rip-offs, Halloween rip-offs and ever cheaper, lamer teen/young adult coming of age comedies, which had little on their minds beyond jokes about getting laid. 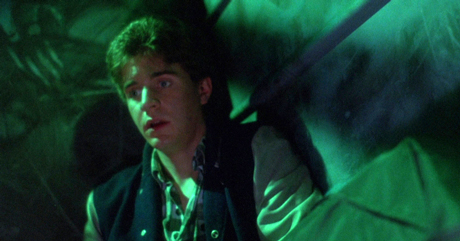 There were bright spots amid the dreck and one of them is 1986’s Vamp, a horror comedy that is actually funny. Yes, the initial setup gives us three guys in search of a stripper for a frat house party, but from that point forward most everything that happens is a surprise. Vamp should also be noted for its visual look, which pretty much nails a style that became the norm for dozens of mid-80s genre pictures. Unlike other horror comedies of the time, with Gene Wilder or Chevy Chase going ‘boo’ in a haunted house, Vamp also has an edge, thanks in part to the creative contribution of model-actress Grace Jones, who makes herself into a singularly strange vampire queen.

Friendly Keith (Chris Makepeace) and too-hip AJ (Robert Rusler) reject a hazing stunt by a college fraternity, but negotiate membership by promising to deliver a stripper for a frat house party. Forced to bring along the wealthy nerd Duncan (Gedde Watanabe) because he has a car, they choose the After Dark club to hire an ecdysiast who fits the bill. What they don’t realize is that they’ve landed in a nest of vampires — the emcee Vic (Sandy Baron) manages an entire crew of undead strippers, that nightly preys on the city’s lowlifes and bums. The monstrous stripper in charge is Katrina (Grace Jones), whose act is genuinely impressive. She has an ex-lover named Vlad (Brad Logan) who helps dispose of the bodies. AJ goes backstage to hire Katrina and gets far more than he bargains for. When he doesn’t return, the concerned Keith and the silly Duncan only slowly realize what they’ve gotten themselves into. The only other human on their side is Allison (Dedee Pfeiffer) a waitress who claims to remember Keith and Vic from back in grade school. 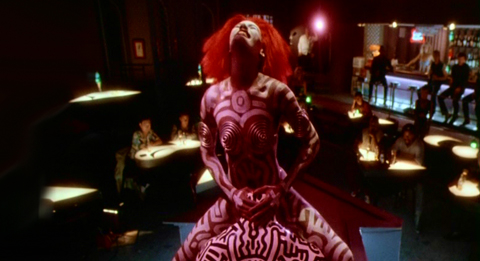 Writer-director Richard Wenk shows considerable skill with Vamp, a picture that should have catapulted him to a higher rank of filmmaking, had the industry appreciated a gem in the midst of a lot of weak New World product. Vamp beats out most ‘A’ pictures when it comes to style and cleverness. The comedy and characterizations are far too good for a raunchy teen comedy, so good that classic screwball comedy comes to mind. The tone is bright and cheery, and the regulation horny guy jokes not as lame as they might be. Chris Makepeace and Robert Rusler work out a natural camaraderie, trying their best to impress their college peers. Gedde Watanabe plays the boys’ comic sidekick so well that we don’t wince at the one-liners that whine, ‘I want to get laid.’ The pace is fast and everybody we meet is funny. Comic Sandy Baron is a great slime-ball emcee, but with soul: he’s apparently spent seventy years as part of Katrina’s vampire crew, and really wishes they could do something exciting, like relocate to Vegas. Vic is the one to voice the After Dark Club’s non-PC solution to homelessness in Los Angeles’ skid row — let them be consumed by vampires. Dedee Pfeiffer’s Allison is the big surprise, a cheerful, adventurous and slightly clueless waitress/stripper, with a bright smile. She recaptures some of the charm of classic-era screwball comediennes.

The film’s airy lightness is balanced with great horror content. The club is a weird design one wouldn’t expect to find in a back alley on skid row, and the dancers are equally too stellar in looks and talent to be in such a seedy location. Vamp first gives us a gang of albino killers on the street, led by Billy Drago, whose face was made for a vampire movie. But the real threat is Grace Jones’ Katrina, whose personality is something of a special effect in itself. Her stripper outfit is body paint and a non-costume of heavy wire that looks like it belongs in the artsy Russian sci-fi silent Aelita. When Katrina transforms into a hungry bloodsucker, excellent Greg Cannom makeup effects (and good direction) come up with some of the best horror makeup wizardry since The Howling. The attack and gore scenes don’t skimp on detail, and director Wenk knows how to present them so that they make just the right effect.

A good example of Wenk’s judgment is when a human victim comes back from the dead as a vampire. Keith’s scenes with him are just great. The friend is righteously pissed off at having to live as just another boring undead bozo in the club. He sincerely wants nothing bad to happen to Keith… but he’s also getting hungry. Vamp is more than just a one-joke vampire comedy. Even the music cues add to the slightly off-center fun — as when the underscore counterpoints the growing menace with the theme from The Donna Reed Show.

Wenk also honors his horror film roots. To cross over into a ‘new zone’ of experience, the boys spin out their red Cadillac on a busy downtown L.A. street. The car spins about five times longer than it should, and when it stops they’re suddenly on a completely abandoned stretch of skid row. They’ve figuratively landed in ‘Oz’: All they have to do is hang out in a ratty coffee shop and wait for night to fall.

It’s hard to explain some career arcs, for the talented and personable leading cast members of Vamp have only had spotty careers going forward. Robert Rusler is still a busy TV actor but Chris Makepeace didn’t get good picture assignments.
Dedee Pfeiffer is indeed a sister of Michelle Pfeiffer and is probably the most capable performer of the bunch – her thankless role is instead a highlight. Of course, Billy Drago was never at a loss for work, and Grace Jones has long been an indelible icon. And this is probably the best film role for comic Sandy Baron, whose character is almost endearing. 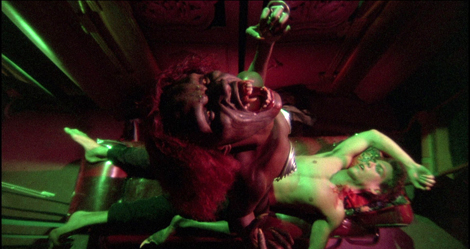 Yes, this tale of nasty vampire strippers is R-rated and does rely on some strip show nudity and frat-boy sex jokes, but they’re amusingly tame by today’s standard. The show is never wholly crass, in intention or execution. As a horror comedy I’d rate Vamp far in the plus column.

Arrow Video’s Blu-ray of Vamp is a stunning HD transfer of this finely-crafted horror comedy gem. When new we pegged it as the culmination of what we called the ‘After Hours’ look in ’80s pictures. Cameraman Elliot Davis floods scenes with decorative and largely unmotivated green and purple light, to add a pleasing stylization to what would be colorless night exteriors. I’m not saying that some green and purple lights are used here & there — the color scheme is dominated by the two hues placed in opposition to one another. In this horror context it might be called ‘Mario Bava lite,’ but I’d more cautiously call it a ‘post- disco ’80s look.’ Davis doesn’t paint scenes with the color depth of a Bava picture but his play with masking shadows and bright highlights keeps the film visually active. 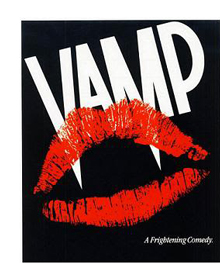 The effects transformation and attack scenes are marvelous, with good angles and great lighting. Unlike the look-what-I-can-do storyboard approach of An American Werewolf in London, these scenes serve the characters and situation first. Frankly, Grace Jones is already such a stunning special effect that Greg Cannom must go to extremes to up the ante in her attack scenes. The other vampire strippers have also been endowed with impressive dental appliances, so fans of bodacious be-fanged vixens will be especially pleased. In fact, somebody missed a cue by not promoting a Playboy ‘Girls of Vamp’ photo shoot. Is it fair to say that the From Dusk Till Dawn movies use Vamp as a starting point?

The disc preserves a glaring visual error, one that I can’t believe wasn’t corrected (cropped away) on previous videos and even in film prints (somehow). A brilliantly constructed skeletal arm and hand is manipulated puppet-like near the end, by means of what seem to be interior wires. In one shot, the right extreme of the frame shows the fingers of the effects puppeteer working the mechanism. As with the movie’s other clever mechanical effects, the effect is so creative that this is one goof we really don’t mind.

Arrow’s featurette/docu round up Makepeace, Rusler, Pfeiffer and Watanabe to talk about the filming; all remember it as being a great experience. Director of Photography Elliot Davis explains his approach, and director Richard Wenk offers some good thoughts on the show. He’s the co-writer of the new The Magnificent Seven, by the way.

Of special interest is Wenk’s 1979 musical horror comedy short subject Dracula Bites the Big Apple, an amusing student film that reportedly launched his big-screen career. It’s amusing as well. A blooper reel, a rehearsal video, an image gallery, TV spots and trailers round out the package. Vamp is an entertaining surprise.