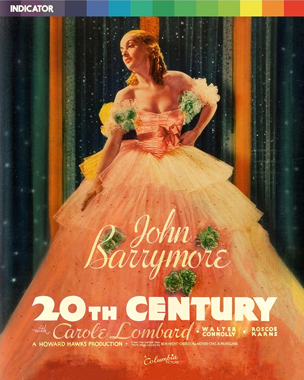 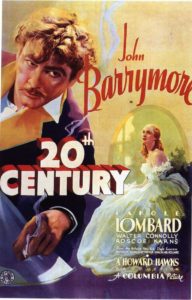 All the world’s a stage and that includes the Twentieth Century, a deluxe passenger train transformed into an itinerant theater thanks to the first class talent in first class, Carole Lombard and John Barrymore. The story of a has-been director conniving to get back on Broadway with the help of a former protege, Howard Hawks’ 1934 comedy is glamorous slapstick—”screwball comedy” before it had a name.

Lombard plays Lily Garland, né Mildred Plotka, former lingerie model, and now a top of the heap movie star. Barrymore is the preening Oscar Jaffe, a director of actors and anyone else who dares cross his path—he was born in a trunk and most of his acquaintances wish that he’d stayed there. Shakespearean in his appetites and his distastes, Jaffe is a cracked genius and master manipulator. It was he who transformed the callow Mildred into “Lily” the Broadway sensation—though Lily would take issue with “transformed”—Jaffe’s acting lessons are more like torture, he bullies and wails but his most persuasive method is a well-aimed hat pin. Those are the tricks you use to train a circus animal and Lily is feeling fairly caged herself—trapped by Jaffe’s overweening attentions her swank apartment features invisible bars and a tapped phone. That, plus her daily mail being stolen from under her nose is enough already—Lily escapes to Hollywood, leaving Jaffe to play Svengali to an equally malleable but far less talented ingenue. 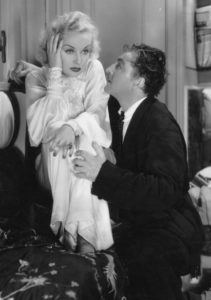 It doesn’t work—his latest flop leaves him stranded in Chicago with a boatload of bills and the creditors on his heels. Wearing a disguise worthy of Lon Chaney or at least the Marx Brothers, Jaffe sneaks out of town on the Twentieth Century Limited bound for New York. It will be a bumpy ride—along for the fun are Jaffe’s business manager and his press agent who act as buffers to the boss’s worst impulses. The streamlined train cars are where the real party is with a cadre of eccentrics that compliment Jaffe’s outré persona; Matthew J. Clark, a chinless religious fanatic with a suitcase full of “Repent” stickers, and a couple of hirsute eccentrics known simply as “First Beard” and “Second Beard.” The Beards are members of an acting troupe known as The Oberammergau Players—naturally Jaffe reveres them as “The only true actors we have left” (if these alarming kooks call to mind the train-full of lunatics in The Palm Beach Story, keep in mind Preston Sturges worked on the script). The bearded gents have a Passion Play to sell and with one of Clark’s bogus checks in his pocket, Jaffe begins his search for a bankable star to play Mary Magdalene. That’s when, thanks to Ben Hecht and Charles MacArthur’s devilishly calculated screenplay, Lily takes possession of the cabin next door. 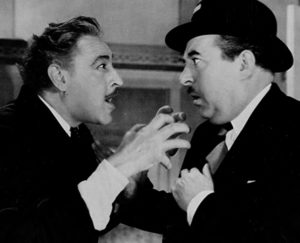 The first time we lay eyes on Oscar Jaffe, a character supremely convinced of his own magnificence, he is not only subdued, but supine, sprawled on the floor with the pages of a play circling him like a new train set—a neat premonition of things to come. Once he’s on his feet so is the movie—crouching, craven, and wild-eyed, Barrymore’s fire breathing performance is a comic turn on his own Mr. Hyde—the actor gives a hot foot to every scene he’s in, even his forelock is electrified (a good number of promotional stills make him look like a vampire ready to pounce.) Lombard had racked up an amazing sixty film appearances between 1921 and 1934 but Twentieth Century is considered by many as her real breakthrough. The movie’s plot mirrors a harsh reality on more than one level; Barrymore’s career would soon be on the skids leaving it to friends like Lombard to extend a helping hand. As for the actress herself, she, like Lily, was so off kilter at the beginning of production that she needed the coaching of both Hawks and Barrymore to secure her job. Surrounded by a crew of Grade A alpha males Lombard’s moxie paid off, she’s one of the most memorable of Hawks’ tough, tenacious and touching female characters. 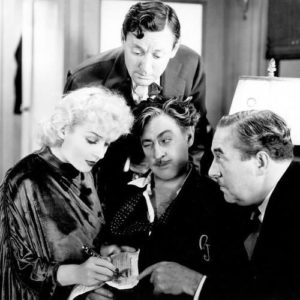 This was Hawks’ and Hecht’s first film after the infamous Viva Villa, a movie about the peasant revolutionary Pancho Villa that sparked an international incident when a more drunk than usual Lee Tracy—once again cast as a fast-talking newsman—bobbed and weaved atop a hotel balcony while peeing on a passing military parade. Twentieth Century must have felt like a holiday for Hecht but in Hawks’ case it was  a literal vacation—he used the paid time he was awarded when he quit MGM to complete Twentieth Century at Columbia Pictures in only five weeks. That breakneck speed was goosed along by a solid crew—in particular the crackerjack work of cinematographer Joseph August (The Whole Town’s Talking and 1939’s The Hunchback of Notre Dame)—he gives this rowdy enterprise a glittery opulence worthy of its title character.

Indicator’s new Blu ray is a beauty—beginning with its unusually fine  transfer of August’s work. They’ve added a number of notable extras but Farran Smith Nehme’s feature-length commentary is a stand-out—her enthusiasm and insight shines a light on Hawks’ movie-making process and the steady parade of memorable character actors. She embraces the appearance of each face like an old friend—as any film fan does when the likes of Walter Connolly, Roscoe Karns or Edgar Kennedy stroll into view.

Here’s the official list courtesy of the Indicator site: