The 70s brought forth some well-remembered TV horror movies, that shocked impressionable kids back in the days of Watergate and Sonny & Cher. Karen Black top lines Dan Curtis’s trio of malevolent tales, all from original stories by Richard Matheson. 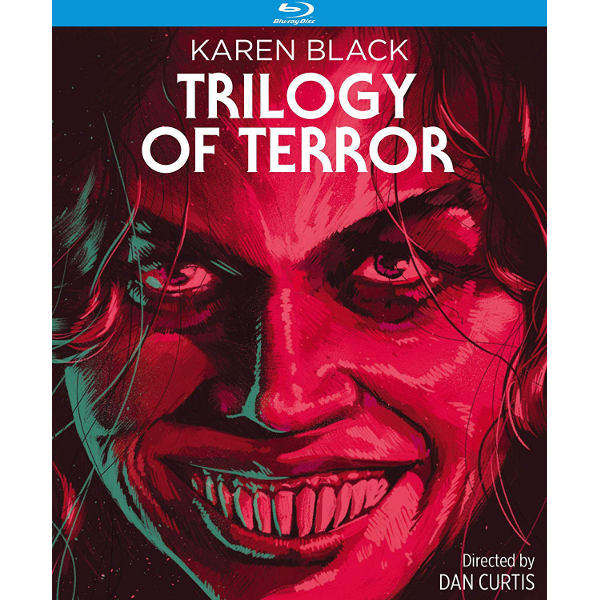 As a celebrated horror phenomenon Dan Curtis pretty much passed me by. I know that TV’s Dark Shadows entranced a generation of horror-starved TV fans, but little that I’ve seen from the producer-director made a dent with me, including his feature films and his TV movies of horror classics. His highly-regarded Night Stalker and Night Strangler TV movies debuted during my college years, when I wasn’t watching television at all.

1975’s Trilogy of Terror may have the best overall reputation of Curtis’s prolific output — the nostalgia quotient for the show is off the charts. It’s a powerhouse acting showcase for Karen Black, then a hot personality soon to be lauded for her performance in Robert Altman’s ensemble epic Nashville. Black had also been in demand for high-profile films by Jack Clayton and John Schlesinger, but was still considered an outsider, a standout in the New Hollywood forerunners Easy Rider and Five Easy Pieces. I personally was charmed by her thoughtful, if perhaps undemanding, part in Coppola’s charming comedy You’re a Big Boy Now.

The three stories come from horror originals by Richard Matheson, with the screenplays for the first two penned by William F. Nolan. All three center on a woman character, an uncommon arrangement that ups the viewer interest quotient. Roger Corman once said that he so frequently gave leading roles to women because they were more interesting to watch. In later years he didn’t mind being characterized as a feminist, either. Karen Black was the obvious draw for Trilogy of Terror; Dan Curtis’s deal gave ABC a show with star name attraction, filmed for relative peanuts.

Neither of the first two stories fulfill their promise, but the opening act Julie is loaded with a sting in its tail. At first we might think we’re seeing ground-breaking adult film material for TV in 1975: date rape. The setup is similar to a psychological film noir from 1949 called The Accused, in which Loretta Young’s unsuspecting college professor is victimized by an unstable student. Karen Black’s Julie teaches literature, and foolishly goes out to a drive-in movie with a predatory student (Robert Burton). Although the episode becomes sketchy on the details, the student soon blackmails Julie into becoming his apparent sex slave. The unexpected twist finish is welcome but not particularly convincing because we have not seen Julie do anything like what she claims to have done, which is control the student’s actions. In fact, what should be an obvious giveaway works against the show: a woman that has been undressed and redressed by a man when unconscious, is damn well going to know something’s amiss when she awakens. The episode is often compared to murderous EC Comics stories with a gory sting of comeuppance in their finales. 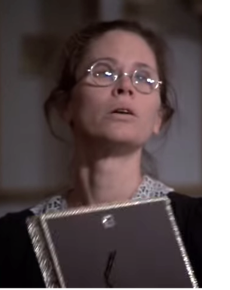 The nostalgia factor has enlarged the show’s reputation, even if most viewers only remember one of its stories. The second episode Millicent and Therese may have worked better when new, but I don’t see how; its surprise content is obvious from the get-go and the only fun is watching Ms. Black create a pair contrasting characters. The prissy Millicent rages apoplectic about her slutty twin sister Therese, writing in a diary and complaining to their doctor (George Gaynes). She warns off a suitor (John Karlen) and comforts a neighbor girl (Tracy Curtis) whose doll Therese has smashed. After the doctor refuses to react to cheap teases of Therese, she flies into a rage; not long thereafter Millicent determines to get rid of her intolerable sister by use of a voodoo doll. The voodoo business comes out of nowhere, but it doesn’t matter because the episode relies too much on a non-secret, that carries no surprise.

Although she claimed that she didn’t want this assignment, Karen Black was likely attracted by the opportunity to play four distinct characterizations. Actresses have been known to further their careers with multi-personality showcases as with Joanne Woodward (The Three Faces of Eve) and Sally Field (Sybil).

Not helping the second and third segments are clumsy expository mechanics. Dan Curtis’s camera goes slack for long passages while Millicent writes in a diary. In the third episode Black’s character conducts more than one long phone conversation. It’s an okay actor’s workout but it still feels like padding.

The third story Amelia need make no apologies, for it delivers on its promise. Director Curtis springs to life for sequences requiring fast cuts and dynamic camera moves; we wouldn’t be surprised to learn that this third show took more time to film than the other two put together. It’s a simple terror assault that barely needs any setup at all: when young Amelia unpacks an authentic African Zuni Warrior doll, we know the ugly thing will raise bloody havoc. And sure enough, 1975 TV viewers found themselves watching an unexpected onslaught of violence, with Amelia pursued, gnawed and stabbed by the pint-sized teakwood terror. The fact that it’s a not particularly convincing puppet means little, because it’s got a nasty set of teeth and its unstoppable attack is a blur of motion coupled with a scary vocal barrage. And Ms. Black’s panicked responses are very nicely modulated.

I think there’s a subtle ‘Good Housekeeping’ factor at work in the episode as well — as she retreats and thrashes about, bleeding from the arm and ankle and neck, Amelia splatters dribbles of blood over everything — the carpet, the drapes, her sofa. Demonic monsters not only kill, they foment disorder. Some viewers aren’t impressed by the Zuni puppet or the way it is manipulated, but I only saw it as an improvement on the pitiful chrome-toothed killer space dolls that munch on Barbarella’s superheroine leotards. Then again, nothing can touch the uncanny moment that the ventriloquist’s dummy stands on its own feet in the classic Dead of Night.

Gary Teetzel notes that Richard Matheson once complained that his popular Twilight Zone episode The Invaders — the one in which Agnes Moorehead does battle with some pint-sized space aliens — was paced too slowly, and that his original script had more action. Matheson’s source short story for the last segment (Prey) shares the basic idea of a woman alone under siege by a doll-sized figure. Was Amelia Matheson’s attempt to rework the concept into something more satisfactory?

The show doesn’t have all that much for its sparse supporting cast to do. Actor John Karlen turned to horror with Dan Curtis and stayed there for five years, which included one near-masterpiece by Harry Kümel, Daughters of Darkness. Learning that supporting actress Kathryn Reynolds had played in David Swift’s How to Succeed in Business Without Really Trying took me completely by surprise. She’s Michelle Lee’s office friend Smitty, and shines in the fine song “It’s Been a Long Day.” Seven years later George Gaynes would land a plum role in Sidney Pollack’s Tootsie.

The KL Studio Classics Blu-ray of Trilogy of Terror is a great transfer of this TV movie. We’re pleased to discover that the show was produced on film, and has been properly preserved. Curtis’s videotape-sourced TV work hasn’t fared well in disc revivals, looking worse than Kinescopes. Beginning in the 1970s, many TV series and made-for-TV movies weren’t given a full film finish.  *  Although it looks fine at its original TV ratio, I think the show was composed to work slightly wide-screen as well, for overseas theatrical presentation.

Kino knows well the fan interest in Trilogy of Terror and provides several extras, including two commentaries. Richard Harland Smith’s new track fills in a great deal of background info on Richard Matheson and his clan of fellow fantasy and TV writers that emerged from the 1950s. The actors get a full going-over as well. Smith shows some admiration for Trilogy, although he does take the liberty of suggesting a rewrite idea for Millicent and Therese, to put it into better shape. With only 72 minutes to cover Smith doesn’t need to vamp. The only downside is the high volume of the feature audio behind him — when all that Zuni screaming starts, it’s hard to concentrate on Richard’s commentary.

The commentary shared by Karen Black and writer William F. Nolan is from a previous disc, and is quite a treat. Black warms up quickly and generates many interesting memories and observations — she’s proud that her Therese is such a flirt. She says she did the movie to help her husband Skip Burton (as Robert Burton) get his career in motion. Nolan and Black talk about her hair and costumes; she says that she always did her own makeup.

A trio of featurettes follow. Curtis’s frequent composer Bob Cobert talks about his work in a video interview conducted by Dan Curtis expert Darren Gross. An 11-minute interview with Richard Matheson, and a lively interview with Karen Black. She tells us that she and Peter Kastner got their parts in You’re a Big Boy Now at the same time, and that her springboard into even more important pictures began when Henry Jaglom introduced her to Jack Nicholson.

Simon Abrams pens liner notes for a paper insert, and a trailer is included for Curtis & Black’s Burnt Offerings.

*  I found this out when I worked for Mike Frankovich’s office, and projected 35mm double-system picture and sound for a screening of the TV movie Judge Horton and the Scotsboro Boys (1976). Although at that point the show existed only as a workprint, it was made ready for Network TV in just a couple of days: new daily prints of each shot were conformed to the workprint, hot-spliced and then hastily transferred to videotape. That was the end product; actually creating a 35mm comp negative may have been optional for TV movies destined only for video. For some TV movies, the un-conformed negative went back in the box, and the NTSC 2″ videotape master became the only copy.

A TV movie as important as Salem’s Lot was probably given a full film finish, especially because alternate versions were prepared for foreign theatrical release. But the very effective The Deadly Tower may have ended on (now) sub-par 2″ video. Star Trek: The Next Generation was originally finished on NTSC video; when Paramount decided that the whole show needed to be upgraded to digital video, it turned into a major post-production undertaking, especially compositing all of the show’s fancy special effects.

With input by Gary Teetzel
Reviewed by Glenn Erickson