Top stars Burt Lancaster, Tony Curtis and Gina Lollobrigida earn their keep in Carol Reed’s powerful tale of ambition and excellence performing forty feet above a circus arena. The best circus movie ever is also among Reed’s most exciting, best directed movies, a solid show all around. 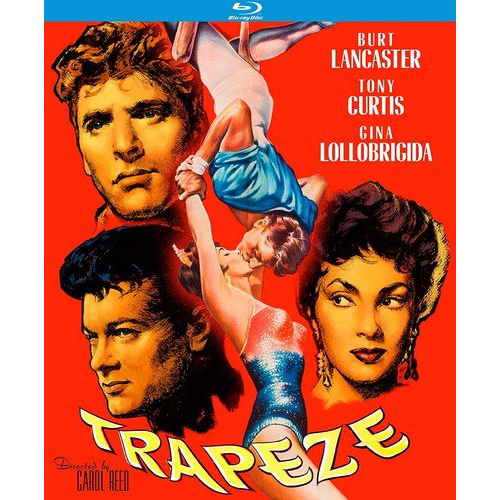 For a long time it seemed that Carol Reed had been canonized for The Third Man, Odd Man Out and little else; his fascinating run of postwar films (The Fallen Idol, A Kid for Two Farthings) mostly played in art theaters here. Reed’s nearly obscure Outcast of the Islands is by far the purest Joseph Conrad committed to the screen. In 1956 he turned to Hollywood with the big-star circus thriller Trapeze, one of the best circus pictures ever made. Burt Lancaster, Tony Curtis and Gina Lollobrigida are cast in roles tailored to their physical abilities and glamorous strengths. Reed’s superb direction makes maximum use of the CinemaScope screen. Some Hollywood hacks were still backing off with their ‘scope lens, filming scenes in wide static masters. Carol Reed and cameraman Robert Krasker use extreme camera angles to express the dizzy, disorienting world of trapeze artists. Author Max Catto takes the circus as a framework for a story about how ambitious circus folk, performers and businessmen, use each other to achieve their dreams. Impresario Bouglione (Thomas Gomez) runs a glamorous circus in Paris. American aerialist Tino Orsini (Tony Curtis) arrives to beg former trapeze star Mike Ribble (Burt Lancaster) to teach him the ultimate, unattainable ‘triple’ spin aerial transfer. Tumbler and glamour girl Lola (Gina Lollobrigida) does her best to attract both men, in her bid for security and a career of her own. Ribble injured himself several years before and is working as a rigger, but Tino’s natural ability inspires him. They work together, Tino flying, Mike ‘catching.’ Lola manipulates the two men, with the blessing of Bouglione, who expects her to get them to sign contracts with him. Aerial work is an art that demands total trust and teamwork, but Lola’s tricks backfire when her two lovers realize what’s going on.

I can’t think of another backstage romance thriller that works as well as Trapeze. The view of the inside workings of the circus is utterly convincing. Not only does what we see look real, our star actors seem to be performing the acrobatic miracles of their characters. Although some traveling matte work is used here and there, it’s clearly them in many scenes. Tony Curtis climbs ropes, Gina Lollobrigida performs a glamorous ‘rope ballet’ and Burt Lancaster utterly convinces as a muscular acrobat at home in the air, even with a bad leg.

Lancaster of course had a circus background, and with his behind-the-scenes partner Nick Cravat (and other experts) embraces the details of aerial work. All three stars are doubled in extreme scenes, but the doubles are excellent. Carol Reed’s camera angles and editing make the substitutions invisible. I believe that Curtis and Lancaster could do handstands, but could they walk down the street together on their hands? The cutting suggests that a perfect double (Fay Alexander) performed Curtis’ athletic street tumbles, but the direction sells the illusion so well that we soon stop looking for trickery.

Carol Reed’s direction captures the complexity and coordination of the circus. Even in CinemaScope he continues a routine use of tilted ‘Dutch’ angles, the ones that were celebrated in The Third Man. Critics once chided Reed for his continued use of these angles, but now they seem totally appropriate. Shots of the trapeze act isolate the fliers in space, and frame them sideways the full width of the frame. The camera sometimes spins when the acrobats spin. This was very unusual for CinemaScope in 1956.

Reed uses his wide shots to show more than one story thread at a time — as Lola argues with her tumbling partners, we barely notice Tino until he decides to climb into the rigging to talk to Mike. Owner Bouglione hovers about, keeping control of the rehearsal while figuring out how to profit from Mike’s return to performing. Horsewoman Rosa (Katy Jurado) is a trouper from Mike’s past, and still in love with him. A promoter (Sidney James) wears a large python on his shoulders, trying to find a buyer for his snake charmer act. The diminutive custodian Max (Johnny Puleo) is the soul of circus life: largely taken for granted, he’s always about, guarding Mike’s cane, sharing in everyone’s happiness or disappointment. Trapeze isn’t a stylized fantasy like Max Ophuls’ Lola Montèz, where the circus is a dizzy metaphor for the trap of notorious celebrity. Carol Reed’s circus is a sweaty arena where entertainers are both idealistic dreamers and pragmatic opportunists. Mike wants the triple to make his life work again, but with the achievement will come personal betrayal.

Lancaster’s Mike Ribble acts cynical and talks tough, but he’s really an idealist, a believer in trapeze art. He recognizes that Curtis’s Tino has star potential, and wants to develop it for its own sake. Tino isn’t exactly an Eve Harrington usurper, but he’ll forget how much he owes Mike. Lollobrigida’s Lola is just a have-not looking to survive and subsist, and using her attraction to keep important men interested in her. The more experienced Bouglione and Rosa have seen acts form and break up like this many times. Mike also realizes that this is the way of the circus (the world), and bears no resentment — forget it, Jake, it’s the Big Top.

Most circus-themed thrillers simply film performances and try to assemble a story around them. Cecil B. DeMille’s The Greatest Show on Earth is the biggest production (it won Best Picture) yet also a hollow pack of dreadful ‘the show must go on’ clichés. Curiously, one of the best circus movies is the exploitative Circus of Horrors. Its murderous circus is a public spectacle of glamour and danger, that recognizes the sadistic urge to watch dangerous performances, and see beautiful women risk their lives.

Trapeze is so good that we haven’t time to think about what is ‘real’ and what is not. Are those Paris streets, or a set? As the high-flying trapeze performances predate CGI by decades, we can feel that nothing is faked. Carol Reed makes it all seem so effortless that brilliant sequences almost slip by, as when Mike, resting at the edge of the arena, is captured by the sight of Lola practicing her rope ballet in an alluring new costume chosen just to get his attention. Lola stretches out in the wide frame, a vision of beauty, and Mike stares up like a little boy in a pastry shop. Carol Reed sneaks in Chopin’s Nocturne Op. 9 No. 2 in E flat major to enhance Lola’s allure — this is the kind of woman for which the average man will give up most everything.

I still find Trapeze to be the one circus movie that fully satisfies. Its powerful story has no cheap thrills and no easy villains. It generates a convincing diagram about how people really work together, with mixed ambitions and a full capacity to both support and betray each other. It’s the kind of story one can watch many times. I think it’s one of Carol Reed’s best. Reed finds a final shot outside the circus, with a man and a woman alone, that’s a nice reversal on The Third Man.

The KL Studio Classics Blu-ray of Trapeze is an okay but not exceptional presentation. It’s long been a problem title; older transfers at MGM always had weak color. This transfer was originally made in the early 2000’s and appears to be from a well-worn element; Kino performed extra clean-up on it, correcting many instances of old damage. Although only the first shot is a little unsteady, quite a few fine scratches are visible. Colors are dull and scenes lack life overall. I’m glad to have this disc but it is to be hoped that this isn’t the best this picture can be made to look. Although the story is so riveting that we’ve happily watched Trapeze in much worse condition, we would have hoped for a better remaster.

The good audio track gives us Malcolm Arnold’s excellent score, which underlines the drama and danger and then stays out of the way of the many circus cues and bits of source music. As the big top is an environment that generates its own music, we don’t know if cues like the Chopin bit for Lola are supposed to be diegetic, or imposed from ‘cinema space’ outside the movie.

A trailer is included that is too bright but has truer color values –Lollobrigida’s skin tone isn’t dark and purplish. Three more trailers are included, of Kino releases starring Lancaster and Curtis.

The one full extra is Kat Ellinger’s audio commentary, which covers all aspects of the show. She’s particularly good at sorting out the ego-fueled careers of the stars without prejudice; we merely hear that Burt Lancaster overstepped into directing territory, finding Curtis cooperative and Lollobrigida not. I don’t think Lancaster would have fared well in our #MeToo environment, but I can’t say that I can see his personality warping movies out of shape, as Joan Crawford sometimes did. Ellinger has a good voice, and does what she can to keep celeb bios from turning into lists of names. She also takes a stab at interpreting some of the film’s subtext — is the Tino-Mike relationship purely professional, or is there more of a bromance going on?