Robot roll call! This also-ran robotic fantasy from the 1950s is precisely the kind of movie one would expect from Republic, a two-fisted anti-Commie tract for juveniles. The studio comes up with an impressive robo-hero, but short-changes us when it come time for action thrills. Still, as pointed out in Richard Harland Smith’s new commentary, Tobor filled the the kiddie hunger for sci-fi matinees, at least until Robby the Robot came along. 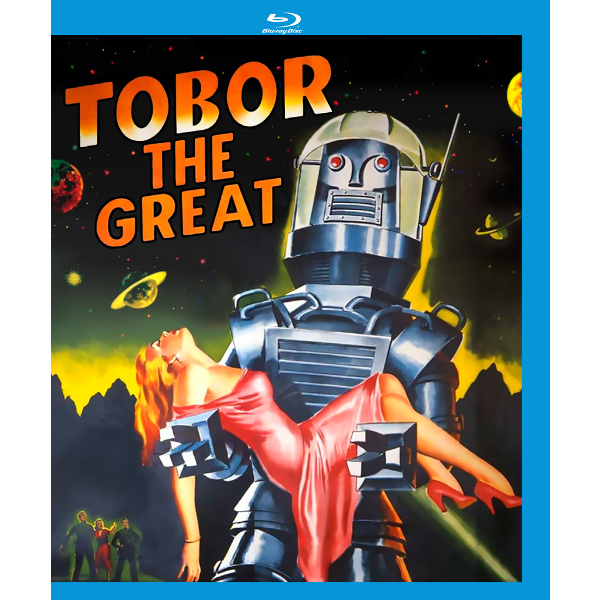 Kino continues its practice of releasing excellent Blu-rays of vintage genre product, especially our horror and Sci-fi favorites. We’ve seen technically okay but indifferent editions of Tobor the Great on VHS and DVD, but the KL Studio classics line finally gets it right, giving the clanking metal man from Studio City a fine transfer in the proper aspect ratio. Nostalgia and ‘completism’ will motivate fan purchases of this title, which has enough points of interest that it won’t disappoint.

Tobor the Great is a juvenile Science Fiction picture released by Republic, the prolific producer of serials. It’s actually produced by an outfit called Dudley Pictures Corporation, a travelogue company trying to cross over into feature production. But it was filmed on the Republic lot and looks just like other low budget Republic shows of its day. Sturdy, slow and straightforward, the film takes little advantage of the ideas in its script. By the time impatient kids saw the robot, the show had been running for over twenty minutes. Yet its fantasy — a boy shares an adventure with a massive metal man — guarantees a kiddie favorite. I remember seeing ‘robot hand’ plastic gloves advertised in a Sears toy catalog right next to the Davy Crockett coonskin caps, and thinking that they must be Tobor’s hands. 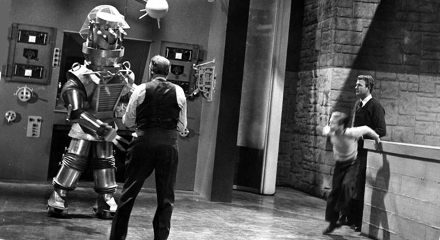 As can be expected from the conservative Republic Studios, Tobor the Great links its simple story to an elaborate anticommunist diatribe, which in those years of government investigations was considered A-OK for juvenile fare. The conflict pitting American space technology against foreign duplicity is numbingly consistent with overall themes in the first wave of ’50s Sci-fi fantasy.

The movie’s attitude toward manned space flight would soon be contradicted by NASA reality. Scientist Dr. Ralph Harrison (Charles Drake) quits the space program over the use of human pilots for the first proposed rocket ships. He’s hired by Professor Arnold Nordstrom (Taylor Holmes) to help perfect Tobor, an impressive humanoid robot controllable by radio, or also by thought waves, or E.S.P.. If Tobor is successful, he can save lives by being the first space pilot. Nordstrom lives with his daughter-in-law Janice Robertson (Karin Booth) and her son Gadge (Billy Chapin of The Night of the Hunter) in a secluded mansion protected by high-tech security devices built by Nordstrom’s servant, Karl (Franz Roehn). But a nefarious communist spy (Steven Geray) stealth-crashes Nordstrom’s press invitational demonstration. When sneaking into the Harrison compound doesn’t work, the spy and his henchmen Paul and Max (Henry Kulky & Hal Baylor) kidnap the professor and his grandson to force him to give up Tobor’s secrets.

Before the 1950s robots could be found only in serials and in a few precocious Sci-Fi epics like Metropolis. The early 1950s introduced the brilliantly conceived alien robot Gort from The Day the Earth Stood Still and Ivan Tors’ rather credible, tank-like workhorse robots GOG and Magog. Tobor (Robot spelled backwards) is an outgrowth of the old-fashioned serial robot, the kind of tin man costume made from sheet metal and silvered paper. His designer may have been the film’s art director Gabriel Scognamillo.

Tobor has a solid metallic appearance, looking somewhat like an angular man in shining armor, but with more nuts ‘n’ bolts and a domed Plexiglas head with a tilting “face.” In the professor’s basement an elaborate tube slides away to reveal Tobor hanging from a crane-like mounting bracket. Once on the floor, the robot exhibits more freedom of movement than some of his more imaginatively designed kin, like Robby the Robot. Tobor can’t talk, but he can climb a spiral staircase. Actually, when Tobor climbs the stairs, all we see are his legs. It seems unlikely that the robot would fit on the stairs anyway, seeing that he’s easily seven or eight feet tall. Once he’s up in the house, he prefers to smash through windows than use doors. 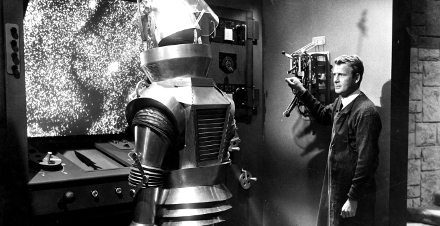 Tobor’s purpose is to replace human astronauts in space rockets, and to this end we’re told that he’s been outfitted with ‘human emotions.’ The professor tests him in various ways, including placing the robot in front of a space navigation console to see how he handles steering through a simulated swarm of space meteors. Tobor’s gripper hands work two flywheels more or less like an Etch A Sketch, while a flurry of spinning rocks leaps at him on a viewing screen, just like a 1970s arcade game. Tobor has a nervous breakdown trying to keep up, and even goes a little crazy. The professor thinks the robot will do just fine as an astronaut, even after his invention knocks little Gadge halfway across the room. Equipped with powers of Extra Sensory Perception, Tobor knows when Gadge’s feelings are hurt and atones for his brutality by offering a caress.

We’re thinking, ‘Robot schmobot:’ if the professor has perfected ESP communication, he’s accomplished a miracle far more revolutionary than a mere mechanical man. I call this the ‘Quatermass and the Pit’ effect. In that TV show and movie, a scientist wants to learn about an alien race and all he has are a few rotting specimens. He pulls a ‘thought visualizer’ invention from a shelf, a headset that makes thoughts play out on a TV screen, as in the much later Until the End of the World. Why are they messing around with Martians and Robots when they have these miracle inventions that will revolutionize human society?

As explained by the late Bill Warren in his Keep Watching the Skies!, Tobor the Great doesn’t promote the spirit of The Right Stuff. Charles Drake’s hotheaded scientist halts a human centrifuge test because he believes no man should be turned into a guinea pig and be subjected to the gamma rays of outer space. The same idea that men are just too vulnerable for spaceflight would be compounded in the next year’s The Quatermass Xperiment. Tobor ends up operating the rocket (a stock shot of a V-2, naturally) by sitting in a space compartment designed for a human. The movie obviously needs an anthropomorphic robot to make Tobor a character, but for an actual space flight all that would be required is a refined automatic pilot and a lot of instruments to determine what the hazards to humans might be.

The juvenile fantasy makes little Gadge a major player in a life & death adult conflict. He’s a rather inconsistent boy genius, and really can’t be trusted for a single second. Gadge talks like an honest, obedient kid, idiotically happy to be dressed up more or less like the boy in the Dr. Seuss fantasy The 5,000 Fingers of Dr. T.  But the moment his elders are gone, Gadge sneaks down to play with Tobor, which basically means furiously pushing buttons on the robot’s control device. Gadge trashes half the house, but everybody laughs: kids will be kids. After seeing RoboCop 2 we really wish that Tobor would snatch the control device from Gadge and do what he wants to do … go on a hot date with the water heater, maybe. 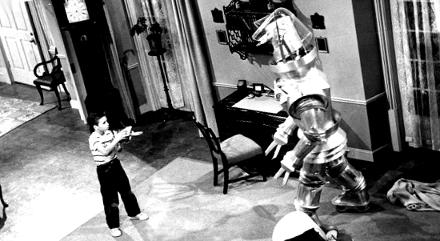 Gadge’s mother Janice is a Korean war widow and a dialogue line tells us that the year is at least 1957. She walks around as if on drugs, holding flowers and remaining mostly oblivious to the excitement in the lab. To our displeasure, Janice never dresses like the cut-out female figure in the poster, to be carried around by Tobor the Hunk. I suppose that a perverse essay about technology and sex could be concocted from these popular visuals of robots carrying sexy dames in their metallic arms. We just assume that anything strange and powerful wants to rape our womenfolk, whether it be the Creature from the Black Lagoon or an oversexed erector set.

Naturally, Tobor is of great interest to ‘potential enemies of the United States.’ Steven Geray’s slimy foreigner wastes no time sneaking into the professor’s demo and ordering a pair of swarthy goons to steal his secrets. As Ralph explains to the very interested Janice, America is only after peaceful scientific progress, while our potential enemies would love to put rampaging warrior robots on their factory assembly lines. In an update of the terminally incompetent villains of Republic Serials, the bad guys’ lame break-in attempt is turned back by the professor’s burglar alarm, which plays the battle soundtrack from The Sands of Iwo Jima to frighten them away. The nefarious spies then kidnap Gadge and his father. In a fairly blatant example of terrible taste, the spies even threaten to burn the kid with a blowtorch. 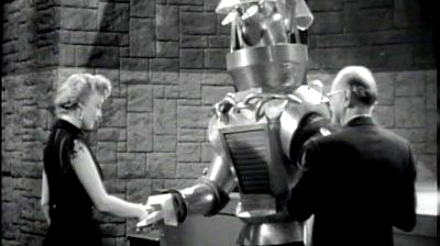 The picture is starved for action, and Tobor’s potential for riotous robot rampaging is barely scratched. The biggest suspense scene simply shows grandpa playing with his radio-spy pen, which will guide Tobor like a homing device. Just like TV’s Lassie, Tobor then receives Gadge’s direct ESP distress call to allow him to ride to the rescue. He knocks down a few doors, klunks a couple of heads together and America is once again safe.

As much as we love good ol’ Tobor, Director Lee Sholem films most of Tobor the Great in Republic’s flat and artless style. When the robot finally goes into action, there are no dynamic shots or really exciting action sequences, just straight coverage little better than average TV work of the time. The film looks very much like the pilot for a TV series, what with the cozy domestic setup, the limited sets and the very Lassie-like story structure. A pilot for a show called ‘Here Comes Tobor’ was made, but it’s possible that the producer wasn’t well enough connected to make a TV deal, or that no sponsor thought the robot was lovable enough. 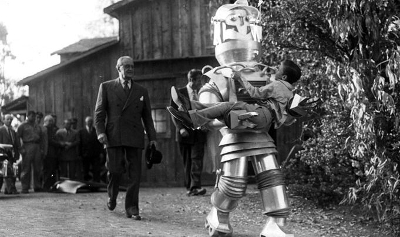 The KL Studio Classics Blu-ray of Tobor the Great presents this kiddie favorite in a smooth widescreen scan that focuses our attention on the action and helps make Tobor’s fancy laboratory headquarters setup look even more impressive. As with all Republic product from this time, the tech values are tops, with excellent mono sound and a consistent, clean photographic look.

Richard Harland Smith’s spirited commentary rounds up every known fact about every actor, producer Dudley, and director Sholem, with time to pinpoint settings on the Republic lot and up in the Santa Susana Pass to Simi Valley. Smith points out the fact that cameraman John Russell is the same craftsman responsible for The Beast from 20,000 Fathoms and Alfred Hitchcock’s Psycho, a credit that guarantees him immortality. In making the Billy Chapin connection to the Charles Laughton classic Night of the Hunter, Smith exercises the idea that the stories are similar, in that Robert Mitchum’s psycho preacher is as implacable a pursuer as our hero Tobor. The argument is a stretch, barely worth the effort. Richard does better examining the odd notion of how this supposed ‘genius’ kid is indulged by the adults — when the Harrison Science Compound is invaded, little Gadge is allowed to join the posse, gun in hand, to go into battle. Yep, America is under attack by Commie creeps, folks, and we might as well teach kids to fight to the death sooner than later.