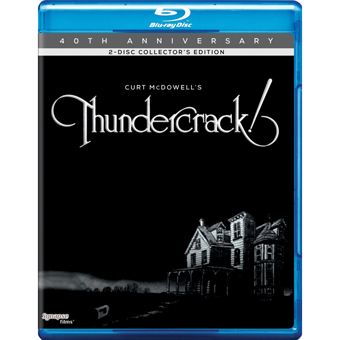 *Not your usual Savant review.* 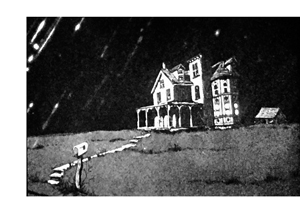 Don May and Synapse films have rescued Curt McDowell’s Thundercrack! from obscurity; until now I knew little about it and was sure I’d never see it again. Actually, the attraction wasn’t a case of wanting to see it again so much as confirming that it had ever existed. In the ensuing decades experimental films have become less difficult to see, even some of the more transgressive examples. I finally reconnected with this one through the movies of George and Michael Kuchar, especially their highly creative Sins of the Fleshapoids, which is both an artistic achievement and a silly hoot. George Kuchar is the screenwriter of Thundercrack!  and plays a key role in it. He is also responsible for the film’s expressionistic lighting and the freakish makeup. 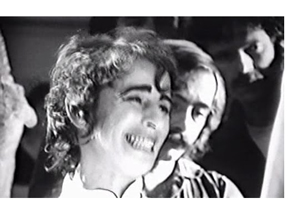 Hailing from the Bronx, the Kuchars specialized in colorful 16mm epics recreating Campy universes of exaggerated dramatics and show-biz extremes, often with grotesque female protagonists that endure highly theatrical emotional agonies. Costumes and sets are purposely amateur-hour yet achieve an honesty that parallels the elaborate melodramas of directors like Douglas Sirk. There are no direct parodies: just because the women have clownish eyebrows doesn’t mean they’re meant to be Joan Crawford. No, the Kuchars’ films present original little worlds of unrestrained imagination. Their ’60s ‘classics’ are fairly restrained, but later stuff gets into scatology. Aspects of John Waters spring directly from the Kuchar sensibility. Likewise, Richard Elfman’s one-shot exercise in pulp vulgarity Forbidden Zone partially resembles the Kuchar universe. A real expert on American Experimental Cinema would make more official connections, I’m sure.

Synapse’s disc introduces us to Curt McDowell by offering a score of his early films as extras. I’ll guess that as queer cinema they’re advances on older work by Kenneth Anger and Jack Smith. What’s special about Thundercrack! is that McDowell and George Kuchar fashion a coherent, consistently funny epic in which the rasty and nasty sex, in grainy B&W, is free from cultural restraint of any kind. Every character talks as dirty as hell, but I don’t recall much actual profanity. Each is some kind of freak, a perv with an agenda. 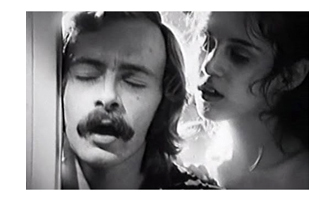 Lightning! Thunder! Gnarly sex! On a dark and stormy night, flooding prompts a number of maniacally libidinous travelers to take shelter at the creaky old house of Mrs. Gert Hammond (Marion Eaton), an alcoholic, sex-obsessed and generally insane widow. The first arrival is Willene (Maggie Pyle), a born-again neighbor whose husband is a country western singer. Two shamelessly forward young women have already picked up a hitchhiker, and his two mysterious wooden crates. Even more crazed is Bing (George Kuchar), who has crashed his truckload of dangerous circus animals. That completes a crazed company of sex fiends that talk exclusively in over-emphatic, arch-melodramatic declarative statements. Several of the characters change in Hammond’s son’s room, which is a museum of smutty photos and drawings. The action alternates between polymorphous sex scenes of every description, and overwrought dramatics between the characters, most of which involve outrageous back-stories, each more dreadful than the last. When the house proves to be surrounded by ferocious circus beasts, some of the characters talk about escaping to the highway. Bing’s back-story is the most insane: he’s both terrified by and madly in love with a monstrous she-gorilla, with whom he is having an intense bestial relationship. Nobody’s perfect.

If you’re waiting for this prude reviewer to describe the sex scenes, you’re barking up the wrong dog. But as they say in the K-Tel ads,  Thundercrack!  has so much more to offer. McDowell auditioned a squad of porn performers in sync with his mind-warping view of cinema. Their performances hit an engaging note of enthusiasm; everybody emotes (explodes?) in claustrophobic rooms, with the storm alternating dim-outs and flashes of lightning. As with the Kuchar pictures, there’s no sense of a film lacking in production value or resources; it’s all of a piece. Some of the non-sex content makes us wince with proto-Waters grotesquery, as when the impossibly degraded Mrs. Hammond receives her guests in a wig that we know to be soaked in vomit. Her demented-clown makeup is more gross than some of the hairy body parts on view in the sex scenes. 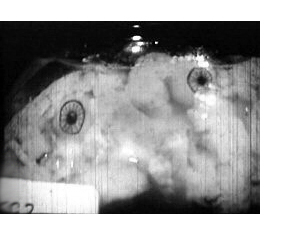 As with many of the Kuchar pictures, there’s a sense of pure fun that I don’t normally associate with hardcore porn. The  particulars are inventive, to say the least; every backstory is a Gothic horror tale. The late Mr. Hammond perished in a fairly unique way. We expect to find his remains in the basement, but not preserved in a row of gruesome-looking jars. The sight of Bing pursued by the amorous gorilla in a white wedding dress — the dress is on Bing, not the she-gorilla — is the absurd payoff for all those scummy ’50s melodramas about ‘apes lusting after white women.’  The greatest moment sees the group panicking as a KILLER ELEPHANT trumpets at them through a doorway. The pachyderm is indicated by a silly shadow on frosted glass, but the camera goes nuts and the actors cower and fall over each other like The Three Stooges in extremis. It’s unique, to say the least. I don’t think I need to see Thundercrack! again, but for the transgressive movie freaks that walk among us, this just might be essential viewing. Please don’t mention my name when the Christian Morals Police nail you to a tree. “I only looked once, honest.”

I fully expect some readers to ask why I write so openly about this grossly pornographic picture, yet have such harsh words for a show like Team America: World Police. The Team America filmmakers surely have a right to express themselves too. But I recognize artistic value (such as it is) in one film and not the other.  I have little respect for Team America, a commercial product that talks dirty to titillate a basically infantile repressed American sexuality. They talk the talk, but Kuchar and McDowall walk the walk, pushing the Taboo Button with genuine artistic courage. Or recklessness. It impresses me that Thundercrack!  is filtered through a lifestyle and mindset alien to my preferences, yet it persists in striking me as artistically legit. It goes its trippy way knowing full well that there’s no place for it anywhere near the cultural mainstream.

Synapse’s Blu-ray of Thundercrack! 40th Anniversary Collector’s Edition is the last copy of this maudit item you’ll ever need to own. Hah! We’re told that various incomplete versions have been drifting about for years; I’ve read online reports of screenings forced to use a sub-par Betacam tape copy. I can happily report that after digital cleanup the show looks very good, as good as what I saw in 1976. The image is stable, bright, detailed and reasonably sharp for 16mm. The audio is much clearer than I remember. International viewers note that Synapse president Don May has provided subs in English, Spanish, French and German.

The Blu-ray is the original 160-minute cut, which includes a full ten-minute musical intermission. The 1:33 aspect ratio is how I remember the film being projected at FILMEX. Composer Mark Ellinger’s track greatly enhances the fun of the movie, underscoring the ’emotionally wrenching’ scenes of conflict and confession. The ‘dramatic reveals’ that arrive at a rate of one every three minutes are each underlined with an outsized sting. Ellinger’s intermission suite is great listening in itself. Director Curt McDowell can be heard on an alternate audio track, from a 1972 interview. It’s about 90 minutes long.

Also on the Blu-ray disc is Jennifer M. Kroot’s 2009 feature documentary It Came from Kuchar, which tells the story of the Kuchar brothers in a fresh, entertaining interview format. John Waters is almost reverential in his remarks about George and Michael, and meaningful input is also offered by Atom Egoyan, Guy Maddin and Wayne Wang. Buck Henry says that his hectoring got Thundercrack! into the screening lineup at FILMEX, where it established a record for walk-outs. And who can blame an audience that had no idea what it was getting into, when confronted by this show? 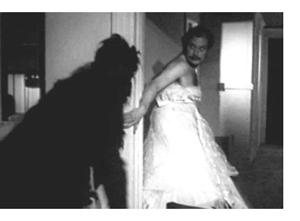 A second DVD is packed with extras compiled for a 2010 DVD release. I remember seeing the four-minute trailer, but cannot remember where.  Included are interviews with George Kuchar and composer Ellinger. Actress Marion Eaton, a definite Earth Mother type, recalls the sensuality of her character in the act of talking to a tree: “Is it the wind that’s making you bang your branches against my door?” An older San Francisco public access interview with McDowell and Eaton is from 1976. The director has a good handle on what makes his X-rated films different from things like Behind the Green Door.